Incumbent Muriel Bowser withstood the challenge to her leadership and emerged victorious as the Democratic candidate for mayor of D.C.

Bowser effectively sailed into her third term Tuesday — a feat managed only by predecessor Marion Barry, who was nicknamed “Mayor for Life.”

In deep-blue D.C., the winner of the Democratic primary is all but guaranteed the seat. Bowser’s victory will be locked down in November, when voters notch the ballot between her and Republican candidate Stacia Hall.

In her address to supporters Tuesday night, Bowser said she was “humbled and grateful” to be selected for the third time. She recalled the words of Barry, who told her that it takes courage to be mayor of the District of Columbia.

She counted her accomplishments as mayor, including her efforts to build more affordable housing and to decrease homelessness. She also looked toward the future.

“We’re going to build a state-of-the-art hospital. And we know even with all that we have accomplished, our city is in a precious time, isn’t it? And we need energy and experience to come back from COVID. So tonight, we choose a future where we won’t lose our ‘Chocolate City;’ we will continue to be a city where Black Washingtonians thrive,” Bowser said.

Bowser said that she is looking forward to working with the other selected candidates, including Council Chair Phil Mendelson and Del. Eleanor Holmes Norton, incumbents who both won their primaries.

“We know elections are tough, right? There’s competition for ideas, right? And when we have a good election season, we have a lot of good ideas,” she said.

Bowser outran Council members Robert White and Trayon White, who she said both called to congratulate her on her victory, and businessman James Butler.

Another ‘Mayor for Life’?

Should Bowser win in the general election, she would be the second mayor to win three consecutive terms, tying with Barry, who presided over the city continuously from 1979 to 1991.

During her second term, Bowser faced off with former President Donald Trump, perhaps most visibly when she named the section of 16th Street Northwest in front of the White House “Black Lives Matter Plaza.” This happened after Trump posed for a photo in front of St. John’s Episcopal Church in 2020, clearing the crowds of people who were protesting against the killing of George Floyd.

With her second term — marked by the coronavirus pandemic, the Trump presidency and uncontrolled gentrification — behind her, she tackles the problem of spiraling homicide and violent crime rates. There’s also the issue of D.C. statehood, which Bowser alluded to Tuesday night. Last year, the U.S. Senate held a historic hearing on D.C. statehood.

Crime and public safety have dominated the mayoral campaign. Homicides have risen for four years straight, and the 2021 murder count of 227 was the highest since 2003, The Associated Press reported.

As activists called for defunding the police, Bowser largely stood by her police department. Pro-police with a tough-on-crime stance, she butted heads with members of the D.C. Council, saying that they are not fully supporting her proposal for more police officers.

Robert White told WTOP that there needs to be an audit to understand how many police officers are needed and where.

Trayon White had a similar message, saying earlier this month that there is a need for police but it’s not the “end-all solution.”

The Democrats were the only party with primary races; all other party candidates ran unopposed. The winner of the Democratic primary is the favorite in the November general election in the heavily Democratic city.

Del. Eleanor Holmes Norton was the projected winner for delegate to Congress. She was with Bowser’s team Tuesday night. Norton has been the D.C. delegate since 1991, and she will face Republican Nelson Rimensnyder.

In council races, Zachary Parker was the projected winner in Ward 5, beating several rivals for the seat being vacated by Kenyan McDuffie, who did not run for reelection. Clarence Lee is the Republican nominee for Ward 5.

Ward 1 incumbent Brianne Nadeau held on to the nomination, beating Salah Czapary and Sabel Harris. No Republicans are running in Nadeau’s race.

Democratic candidate for Ward 6 Council member Charles Allen was unopposed and was projected the party’s winner, as well.

Schwalb thanked D.C. voters, and said, “This is a victory for the people of Washington.” He said his “fresh approach” resonated with people.

“I think Washington, D.C. just appreciated the fact that I was just out there trying to listen to them, and spend time in every ward, and every neighborhood, using two ears to listen to people in the community. What they love about our city, what they would like to see our government do,” Schwalb told WTOP.

Early Wednesday morning, the projected winner for the At-Large member of the D.C. Council was called for Anita Bonds, who will face Republican Giuseppe Niosi in November.

Matt Frumin, who ran for Mary Cheh’s outgoing Ward 3 council seat race, declared victory Wednesday after obtaining 38% of the vote. Eric Goulet, who had the second-highest vote total with 31%, conceded the race just before midnight.

Once confirmed the primary victor, Frumin will take on Republican David Krucoff, who ran unopposed.

Shadow Rep. Oye Owolewa, who is being challenged by Linda L. Gray, tweeted thanks to all of his supporters shortly after 8 a.m. Wednesday.

While that race has not yet been called by AP, Owolewa acknowledged he may not win — but wasn’t ready to concede.

Good morning DC, this race may be early to call. With that said, if we end up down by the end, I’d like to thank DC and all those who’ve supported me for the past few years. You gave a kid with the funny name a chance. This is not the end, it’s just the beginning.

WTOP’s Will Vitka, Matt Small and The Associated Press contributed to this report. 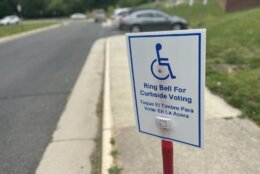 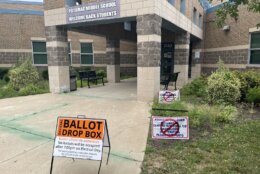 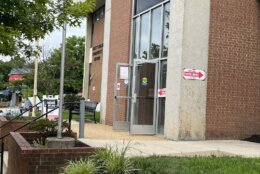 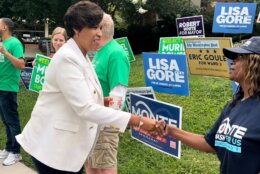 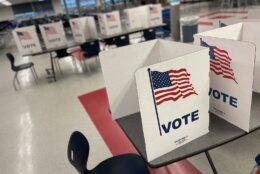 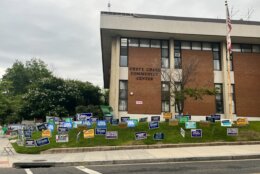 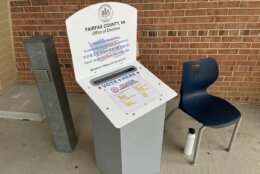 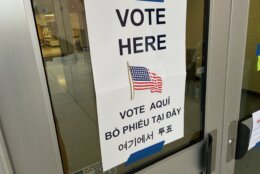