A U.S. Senate committee hearing will be held Tuesday on legislation that would make D.C. the 51st state, a rare event that statehood supporters hope will keep the issue in the political spotlight.
Listen now to WTOP News WTOP.com | Alexa | Google Home | WTOP App | 103.5 FM
(1/3) 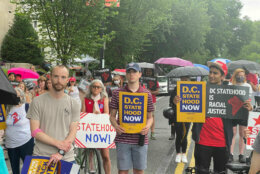 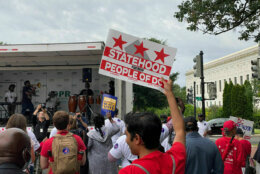 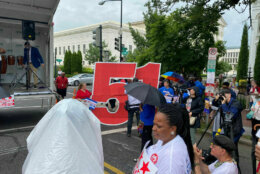 Supporters of legislation to make D.C. the nation’s 51st state testified on Tuesday at a rare U.S. Senate committee hearing on the issue.

The sponsor of the legislation, D.C. Del. Eleanor Holmes Norton, pointed out that the hearing of the Senate Homeland Security and Governmental Affairs Committee marked a unique moment for Congress.

“This hearing is of historic significance,” Norton said, “because it is only the second Senate hearing on our D.C. statehood bill in the nation’s history.”

The committee has heard from several witnesses, including D.C. Mayor Muriel Bowser.

Bowser framed the issue of statehood as one based on civil and voting rights, but also noted that opponents have raised some arguments that she called “preposterous.”

“In 2019, we were asked what would happen to the parking spaces for congressional staff if the District were to become a state,” she said. “We were at a loss to see how our full democracy could be equated to just a few parking spaces.”

Tuesday’s hearing is the Senate’s first on the issue since 2014, when the same committee held a hearing on a similar bill that Norton had proposed.

Former Sen. Joe Lieberman, who as an Independent represented Connecticut, also spoke at the outset of the hearing. He told the committee that D.C. is the only capital of any country in the world where citizens “are disenfranchised in this way.”

D.C. statehood is strongly opposed by Republicans for a wide range of reasons, including that it would likely lead to more Democrats getting elected to Congress.

D.C. votes overwhelmingly for Democrats and would get a voting member of the House and two U.S. senators if the legislation passed.

GOP lawmakers have also argued that Norton’s bill is unconstitutional.

“I have both practical and constitutional concerns about making Washington, D.C., its own state,” said the committee’s ranking Republican, Sen. Rob Portman, of Ohio.

Norton said that the legislation has been carefully crafted to make sure it is constitutional, and that making D.C. a state would not require an amendment to the Constitution.

The House has passed Norton’s legislation the last two years, most recently in April.

Democratic Delaware Sen. Tom Carper is the sponsor of the statehood bill in the Senate. Democrats have more than 40 co-sponsors of the measure, but West Virginia Democratic Sen. Joe Manchin has said that he does not support the bill.

No Republicans back the legislation. Without any GOP support, the bill can’t make it to the Senate floor for a final vote.

Meanwhile, a few blocks from the Capitol, hundreds gathered at a rally to voice their support for D.C. statehood.

Centuries after the American Revolution, said George Lambert with the Greater Washington Urban League, “We still have taxation without representation.”

D.C. Council Member Janeese Lewis George told the rally, “I was born without representation, but I will not die without it.”

There have only been a handful of congressional committee hearings dealing with D.C. statehood in the decades since a 1993 House vote, when Norton’s original bill was defeated.

The nation’s capital has a larger population than Wyoming or Vermont, and its estimated 712,000 residents pay federal taxes, vote for president and serve in the armed forces, but they have no voting representation in Congress.

Republicans, however, dismissed the bill as a cynical Democratic power play since the District votes solidly Democratic. They claim statehood was never the intention of the Founding Fathers and insist that Congress doesn’t even have the power to change D.C.’s status.

“What Congress cannot do is override the Constitution anytime it becomes inconvenient for a majority in Congress,” said Sen. Josh Hawley of Missouri. “The Constitution endures and that is the fundamental premise of our Democratic republic, and I fear that premise is being threatened by this legislation.”

The bill proposes creating a 51st state with one representative and two senators, while a tiny sliver of land including the White House, the U.S. Capitol and the National Mall would remain as a federal district.

Instead of the District of Columbia, the new state would be known as Washington, Douglass Commonwealth — named after famed abolitionist Frederick Douglass, who lived in Washington from 1877 until his death in 1895.

WTOP’s Luke Lukert and The Associated Press contributed to this report. 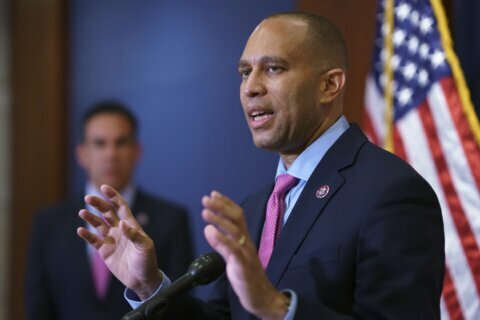