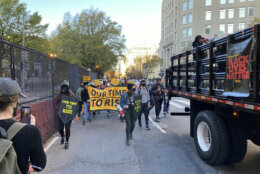 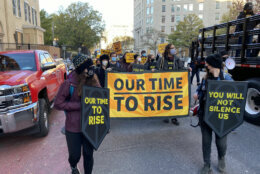 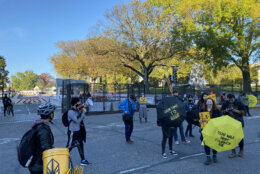 Protesters hit the streets again Thursday in D.C. as results for the presidential election continued to roll in.

Shut Down DC planned a demonstration earlier in the day around the White House, demanding that all votes be counted after President Donald Trump filed lawsuits to pause vote counting in three battleground states — Pennsylvania, Michigan and Georgia.

The group said it was anticipating a few hundred people to gather near the White House grounds, said WTOP’s John Domen, who reported from the scene.

“We’re out here to have a bit of a party, have a caravan around the White House of bikes, of vehicles, and people on foot, demanding that every vote be counted, that our democracy be protected, and that we celebrate the diversity and that every voter matters in this country,” said Collin Rees, with Shut Down DC.

The group celebrated with music and chanting.

“The action is to show that people are watching, to show that we are here to make sure that our democracy is protected,” he said.

Rees added that demonstrators are ready to protect themselves and their people, but they don’t expect there to be any escalations.

“We do not have plans to escalate, we’ll be continuing to move around the White House at a steady pace,” Rees said. “If the police escalates, that’s something we’re prepared to deal with, but not something we’re planning on.”

Jamie Vindon, an organizer with the Sunrise Movement, said their message “is that we can’t be silenced.”

“Young people are engaged. We care about the issues,” Vindon said. “We want to ensure that every single person’s voice is heard. Our vote is part of our voice, and that we’re not going to sit silently and watch a Trump administration attempt to prevent votes from being counted, we’re not going to sit back silently and watch people yell, ‘Stop the count.'”

As of Thursday morning, Joe Biden is within striking distance of the needed 270 electoral votes to claim victory.

On Wednesday, climate change activist group Extinction Rebellion DC, which often protests in favor of policies to address climate change, such as the Green New Deal, was one of the first groups to organize a protest, starting at the intersection of North Capitol Street and Louisiana Avenue Southeast, outside of Union Station, before marching toward Capitol Hill.

The group was joined by members of Sunrise Movement DC, another climate activist group, and Shut Down DC.

Shut Down DC said it plans to gather again Friday in McPherson Square.

What’s next here in DC? We’re telling the GOP they can’t steal this election. Tomorrow at 11:30 AM in McPherson Square https://t.co/hCebV942AH @CASAinAction @SPACEsInAction #WeThePeople #CountEveryVote