DC protests resume as election results continue to come in 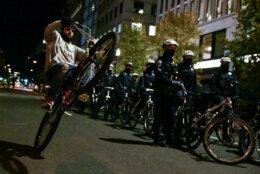 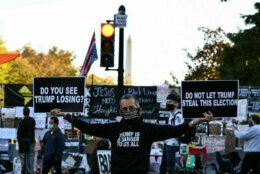 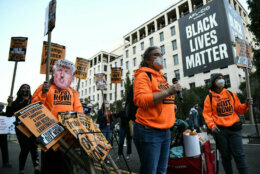 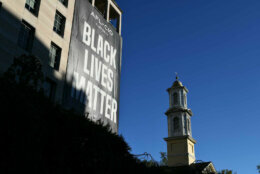 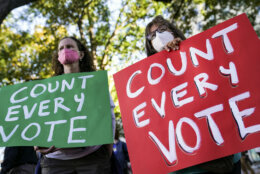 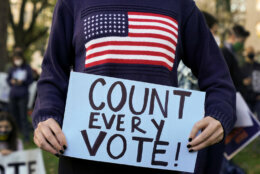 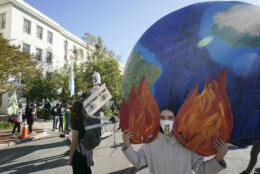 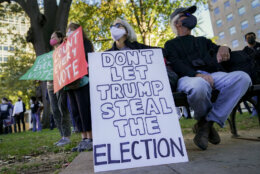 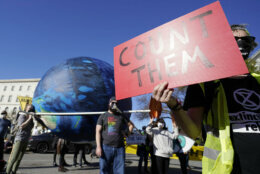 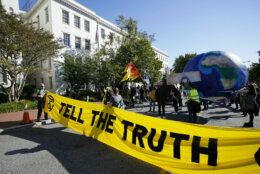 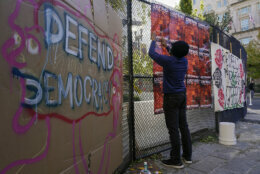 A day after a tense Election Day brought together thousands to D.C. for large protests, demonstrations restarted Wednesday as results continued to roll in.

The continuation of the large protests came as three people were stabbed close to the White House on Tuesday evening.

WTOP’s Alejandro Alvarez reported that the D.C. police presence at Black Lives Matter Plaza on Wednesday night had increased, though the crows sizes were smaller than Tuesday.

Earlier, climate change activist group Extinction Rebellion DC, which often protests in favor of policies to address climate change such as the Green New Deal, was one of the first groups to organize a protest, starting at the intersection of North Capitol Street and Louisiana Avenue Southeast, outside of Union Station, before marching toward Capitol Hill.

The group was joined by members of Sunrise Movement DC, another climate activist group, and Shut Down DC, an umbrella organization that helped organize the protest.

According to Alvarez, about 50 people marched through the streets, accusing President Donald Trump’s comments on halting the vote counting in states as “an attempt to steal the election.”

Andrew Sobey with Extinction Rebellion said what happened during the 2020 election was important as results are still coming in. However, the group’s right to voice its disapproval with how the country is being run “does not end with the election.”

“The election is not enough to affect the change that we need to survive,” Sobey said. “We are continuing to take direct action today targeting the enablers of the regime and the extinction profiteers who have gotten us into our current mess.”

Demonstrators marched toward the D.C. offices of Fox News, a media outlet they believe is complicit in “the mess that we find ourselves in,” organizers told WTOP.

Extinction Rebellion spent over a year advocating for the Green New Deal. Their first stop is Fox News which they accuse of lying to viewers about election and climate issues, wheeling around a figure with a money bag for a head and a check made out to Fox for “lies.” pic.twitter.com/oNF1KihWIV

The protest moved toward the headquarters of the Republican National Committee on First Street Southeast but was blocked off by police. Those who marched down stayed within a few blocks of the building, using a megahorn to continue their protest.

“I don’t think they are going to risk arrests, but they are currently holding a speak out, where one of the demonstrators took hold of the megaphone and said, ‘Politics is not a spectator’s sport,'” Alvarez reported.

Moving in front of the RNC itself @codepink co-founder Medea Benjamin takes the megaphone and accuses Republicans of leveraging the courts to cheat: “When we look at the RNC, we have to think of it as the most anti-democratic institution in the country.” pic.twitter.com/Qq9BuR0qHz

Meanwhile, a rally was held supporting all votes being counted, with several signs saying “Count every vote.” The rally started after the Trump’s campaign announced it would file lawsuits to contest several results in key battleground states.

Judith Howell, a security worker, said she was a civil rights activist in 1960s and did not mind getting into “good trouble” in order to have the same economic opportunities in the United States.  Now, she said she fights to keep her vote from being stolen.

“If my vote is my voice, then I have no voice unless my vote is counted,” Howell said. “We remember Bush/Gore. So stand down on those semi trucks you’re revving up. I did not risk my life during the Civil Rights Movement to have my vote stolen.”

Several more protests are expected to occur in D.C. throughout the evening, one of which will be a part of a national protest held in five cities against Trump’s campaign.

At 1 p.m., a pro-Trump “Do Your Job #STOPTHESTEAL” protest will be held in front of the Republican National Committee at 320 1st St. SE.

This story will continue to be updated. Stay with WTOP for the latest.

WTOP’s Alejandro Alvarez, Will Vitka and the Associated Press contributed to this story.