If you live or work off I-66 west of the Capital Beltway, chances are you’ve been conditioned to the ongoing work and ever-changing landscape of the Transform 66 Outside the Beltway Project.

This work will bring express lanes to the 22.5-mile stretch of roadway, rebuild major interchanges along the I-66 corridor, create thousands of new park and ride spaces, and expand trail options for cyclists and pedestrians.

It appears there are weekly reconfigurations of lane and interchange layouts to keep every driver on guard when venturing between Gainesville and Vienna, Virginia. This weekend will be no different, but with a few layouts in their final stages slated to end May 15.

This is also the final weekend for the overnight work along Route 29 between Heathcote Boulevard and University Boulevard, where two lanes are closed northbound and one southbound for drainage installation. This work is also scheduled through May 15, with all projects being weather-dependent.

There are overnight traffic stoppages and lane closures planned on I-66 both directions between Route 234 Business (Sudley Road) and Route 29, Centreville, for overnight on Friday, May 8 and Saturday, May 9, between midnight and 5 a.m. As part of the Transform 66 Outside the Beltway Project, NOVEC will be relocating overhead power lines. Virginia State Police will be on scene to coordinate intermittent stops in both directions simultaneously.

Starting May 15, the Cedar Lane Bridge over I-66 between Nutley Street and I-495 will close for about six months for the widening of I-66, which will include a shared-use path and wider sidewalk, as well as a nearby connection to the new shared-use path.

Inside the Beltway, the I-66 eastbound widening project will add a through lane for about four miles between the Dulles Connector Road (Exit 67) and Fairfax Drive (Exit 71). For the past several weekends motorists have had only a single lane traveling from Falls Church toward Arlington inside of the Beltway.

Howard Road is closed through Monday, May 18, weather permitting, with detours posted between the WMATA Parking Garage Access Drive and South Capitol Street.

Expect a temporarily closure of the Suitland Parkway between Firth Sterling Avenue Southeast and South Capitol Street on Saturday from 5 a.m. to 7 p.m.

Road work will continue for the next two weeks at:

For a full list of affected areas in the District check out PaveDC for DDOT’s interactive tool of ongoing and completed work locations.

The MDTA has announced that the Chesapeake Bay Bridge’s new full-time, all-electronic system will go live Tuesday, May 12.

Beating another goal for summer travel, cashless tolling will be in place for those eastbound on U.S. Route 50 approaching the bridge.

Drivers will have access to highway-speed lanes with three lanes merging down to two at Oceanic Drive (Exit 32). The left lane will only be open when two-way travel is in effect on the westbound span of the bridge.

Due to the forecast, work is scheduled to start on Sunday night. Commercial vehicle inspection pull-off will remain to the right.

Starting next week, EB US 50 drivers approaching Bay Bridge will have access to highway-speed lanes. 3 lanes will merge down to 2 at Oceanic Dr (Ex32). Left lane will only open to traffic when 2-way is in effect on the WB bridge. Due to forecast, work will start Sunday ngt (1/2) pic.twitter.com/YzmgOAssom

The Purple Line construction project — the ongoing installation of 16 miles of light rail between Bethesda, in Montgomery County, to New Carrollton, in Prince George’s County, might be running into some problems in the next 60 to 90 days.

Work will be done from 7 a.m. to 5 p.m. on weekdays and weekends. Temporary lane closures will occur. Lanes will intermittently be closed on 66th Avenue and 67th Avenue.

In Frederick, the Maryland Department of Transportation State Highway Administration has Maryland Route 77 closed and detoured between Catoctin Hollow and Stottlemyer roads through May 21 for a culvert replacement project.

The Maryland Transportation Authority continues the bridge replacement work on I-895 just north of the Baltimore Harbor Tunnel. There continues to be two-way travel in the Harbor Tunnel with one side closed.

Metro continues its reduced work and service during the public health emergency. To ensure employee and passenger safety, Metro has 19 stations and parking lots closed, with no shuttle bus service provided.

Much of the scheduled weekend work continues to involve enhanced preventive maintenance and testing. The Summer Platform Improvement Project prep work will continue this weekend.

Metro riders are still being asked to follow the Centers for Disease Control and Prevention’s guidance in wearing a face cloth covering, which is strongly encouraged aboard buses, trains, and MetroAccess vehicles, as well as in rail stations, bus terminals and other transit facilities.

Boarding changes remain the same — the first and last cars of all trains are closed to the public for the protection of essential Metro staff and train operators. All trains are eight cars in length. 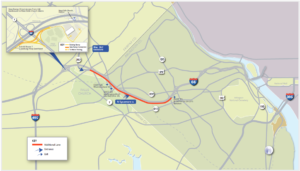