Home » Washington, DC Weather » How long will the…

How long will the cold weather last?

The first full week of April brings temperature swings, winds and a needed chance of rain.

WASHINGTON — Baseball season has officially started and many are anticipating the Nats’ home opener on Thursday afternoon. For most of the preseason in March, it was a very dry month, finishing almost 2 inches of rainfall below average. So we need some rain. But it looks like the best chance for a soaking rainfall won’t come until Thursday.

The following image shows the weather players on Thursday: the mild air before the rain starts, the rain bands themselves starting during the day, low pressure, and the cold air waiting to move in for Friday and into the weekend. The region will see some big temperature changes day-to-day during this first full week of April.

The warm weather the region saw Monday is gone, replaced by temperatures that dipped into the teens Tuesday morning.

Lots of sunshine is on the way for Tuesday courtesy of strong, Canadian high pressure, but temperatures will struggle to get out of the 40s for afternoon highs. That’s pretty significant considering the April sun angle. As a matter of fact, it’s only the April sun angle that is helping temperatures get as high as they will this week.

Wednesday will be on the flip side of the high pressure, so milder air will return. Then energy from northwestern Canada will ride the jet stream steering winds and form another storm system coming at us from the Ohio Valley. Many of the computer models indicate the storm will deepen quite a bit and consolidate into a low pressure system off the Mid-Atlantic coast on Thursday. This would slow it down and bring the best chance for a soaking rainfall that we’ve had in a long time.

Unfortunately, as already mentioned, it may interfere with the Nationals home opener. At least with the rain chances on Thursday, it looks like we’ll be on the mild side of things. The showers will likely linger into at least the first half of Friday, but by then cooler temperatures will be back in the mix. That cooler air will likely linger into the coming weekend.

With all these big temperature differences across each of the storm systems, gusty winds will be likely, making this feel more like the beginning of March rather than April. Luckily, nothing yet suggests this week will have a repeat of the damaging winds from Saturday night and Sunday morning.

Highlights of the workweek weather potential:

WEDNESDAY
• Best day of the week for outdoor activities
• Sunny for most of the day
• High temperatures closer to seasonable levels, near 60 or a little above

THURSDAY
• Cloudy and breezy but mild
• Periods of rain throughout the day, possibly interfering with Nationals’ home opener
• Good potential for an inch of rainfall throughout the listening area

National Weather Service forecast high temperatures for Wednesday and Friday, showing the big changes before and after Thursday’s storm system.

The map below shows the Weather Prediction Center’s forecast for rainfall from Wednesday through Friday. Our potential is only Thursday through Friday. If it all works out, it will put a dent in the rainfall deficit for the year, most of which is due to the very dry month of March. 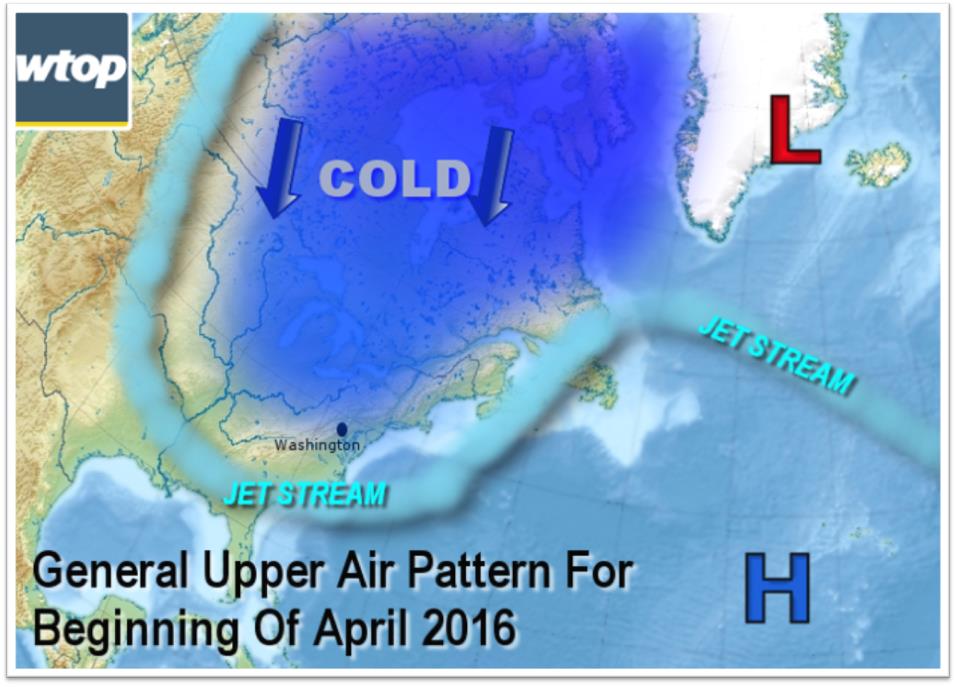