The wind chill advisory from 9 p.m. Wednesday to 10 a.m. Thursday follows a snow squall and and "flash freeze" that complicated a wintry Wednesday afternoon around the D.C. area.

WASHINGTON — The wind chill advisory from 9 p.m. Wednesday to 10 a.m. Thursday follows a snow squall and and “flash freeze” that complicated a wintry Wednesday afternoon around the D.C. area.

“While the air here will be nowhere near as brutal as the Midwest, wind chills tonight and into tomorrow morning will range for -15 degrees to 5 degrees,” said Storm Team 4 meteorologist Amelia Draper.

Earlier Wednesday, the squall brought whiteout conditions, gusty winds and a dip in temperatures as it moved through, making driving especially dangerous on untreated surfaces.

“When wind chills range from -15 degrees to -10 degrees, frostbite is possible within 30 minutes,” Draper said. “Throughout the day, highs will warm into the low to mid-20s with wind chills in the single digits and teens — brutal, but not as bad as the morning hours.”

On Friday, some light snow showers are possible, especially north of D.C., but Draper called it a “low impact event” with minor amounts generally under an inch. Highs are expected to warm to around 30.

After rain, sleet and snow messed up Tuesday evening’s commute, some D.C.-area commuters were able to ease into a very chilly Wednesday following delays and cancellations.

The delayed start for schools and the government meant a later morning commute. Late Wednesday morning, WTOP Traffic reporter Jack Taylor reported some problems on area highways but nothing major. All roads had been treated.

“This could have been 10 times worse,” he said.

The school and federal-work delays had apparently lightened up volume, Taylor said. “Just be careful, especially as a few more of us get out onto the roadway. There are slick spots, so don’t overdrive conditions please,” Taylor said.

The cold, however, means the roads won’t necessarily be in the clear. Low temperatures heighten the risk of slick spots, even if roads have been treated. “Ice is nothing to play around with,” said Charlie Gischlar, spokesman for the Maryland Department of Transportation’s State Highway Administration. “If anything looks wet, assume it’s frozen.” 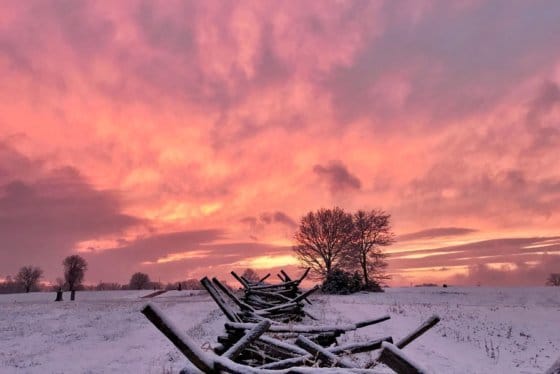 See photos and tweets of Tuesday’s snowfall from WTOP reporters and listeners.

MARC offered full service Wednesday morning, but there were delays due to equipment issues. Keep up with MARC service updates here.

Virginia Railway Express operated on a normal schedule, and service appeared to be running normally. Keep up with VRE service updates here.

Metro said the top level of its parking garages are closed due to the weather.

In Montgomery County, the RideOn Bus system has had schedule changes in effect since Jan. 6, but there’s no word yet on any delays due to the weather.

Alexandria Transit Company’s DASH Bus was operating on a regular schedule and ran extra AT3 and AT4 trips between Old Town and the Pentagon throughout the morning.

Going into midday Wednesday, the winds caused power outages in the area, mainly in Loudoun County. They are, however, likely to spread as the day progresses. See the latest numbers in the map below.