Workweek weather: Cool, dry conditions roll in for week ahead

This workweek's weather will have temperatures cooler than average for several days, but with less cloud cover and chances for scattered showers or drizzle.
Listen now to WTOP News WTOP.com | Alexa | Google Home | WTOP App | 103.5 FM

WASHINGTON — The storm system that brought the rain and thunderstorms at the end of last week — followed by lingering showers Saturday and Sunday — were all the result of a blocked-up weather pattern that was establishing itself called an Omega Block.

It gets its name from the shape of the jet stream winds, resembling the capital Greek letter Omega (Ω). It’s definitely a bit jargon-y, but it’s worth mentioning because they’re fairly common in the spring and they can last for days and days, if not weeks. You may recall we had one last year, but it was in April and it brought us different types of weather. This time around, we are also going to be mainly dry, but we are going to be on the cooler side of the setup.

A bit blocking area of high pressure is over the north Atlantic right now, which has caused a deep dip, or “trough,” to develop in the Northeast and the mid-Atlantic, resulting in a flow of unseasonably cool air to spill down from Canada, air that is especially cold in the upper levels. This resulted in lots of instability and the unsettled weather over the weekend.

At the beginning of the new workweek, it will be less unstable during the daytime since we have dried out the low levels quite a bit. This will keep our temperatures cooler than average for several days, but with less cloud cover and chances for scattered showers or drizzle. Various computer models are probably too optimistic in making it too sunny for the first half of the week, but at this point, the clouds should be mainly scattered around.

The key characteristic about these blocked patterns is that, well, they’re blocked, so not a lot changes day-to-day. The differences will be subtle this week with only a slow increase to seasonable temperatures not until Wednesday. A warm front trapped in the block will send rain and thunderstorms into the Midwest, but it will take some time for them to get here.

The pattern will break down, if only temporarily, as we get near to the end of the workweek, and a storm system will finally be able to eject out of the Plains, sending clouds and possible showers our way. But they may also last into the upcoming weekend. And some of the longer-range models suggest we could end up right back in another block next week.

If this “pattern of patterns” does persist the rest of the month, it’s highly unlikely we’ll see very many warm weather records of any sort like we did in April of this year.

Of course, we could still use some more rain, but the “Battle of the Beltways” is on this week, and it looks like the weather won’t interfere until Thursday at the earliest. However, some of the evenings will be fairly cool. 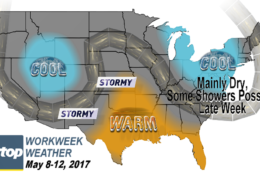 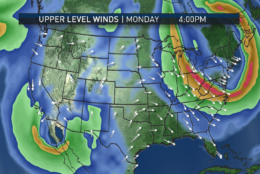 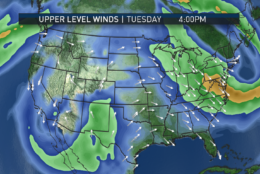 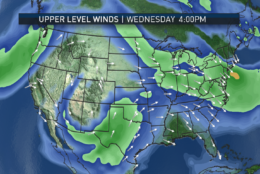 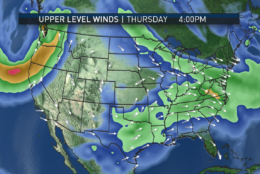 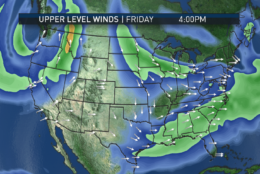 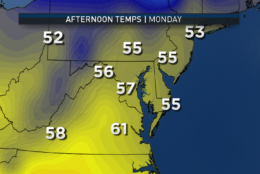 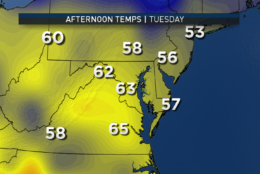 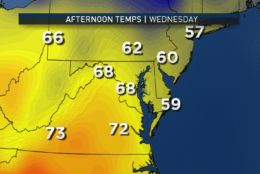 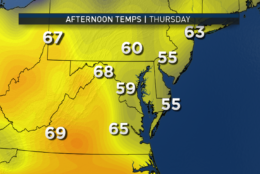 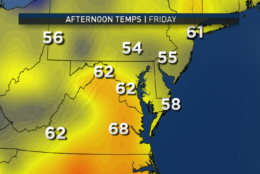 TUESDAY
• Clear and very chilly start
• Mostly sunny in the morning
• Fair weather fluffy clouds throughout the afternoon
• Not quite as cool or breezy, but still below average
• Highs about five degrees higher than Monday

WEDNESDAY
• Cool start
• Lots of high-level clouds showing up in the western sky
• High temperatures closer to averages, this time just below averages

THURSDAY
• Much milder start
• More clouds than sun
• With limited sunshine, back to several degrees below average
• Keeping an eye on possible earlier arrival of showers