WASHINGTON - MARCH 30: Ryan Zimmerman #11 of the Washington Nationals celebrates with teammates after hitting the game winning home-run in the bottom of the 9th inning against the Atlanta Braves on opening day on March 30, 2008 at Nationals Park in Washington, D.C. The Nationals won 3-2. (Photo by G Fiume/Getty Images)

Home » Washington Nationals » Looking back at past…

With the start of baseball delayed due to COVID-19, we're digging into the archives and putting the spotlight and the top moments from previous Nationals home openers.
Listen now to WTOP News WTOP.com | Alexa | Google Home | WTOP App | 103.5 FM
(1/15) 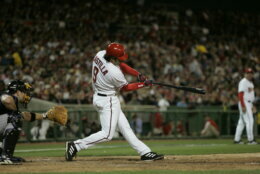 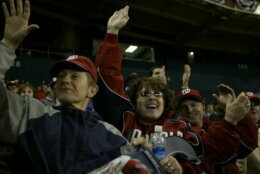 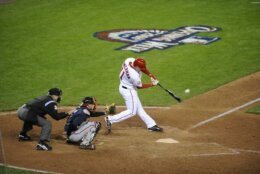 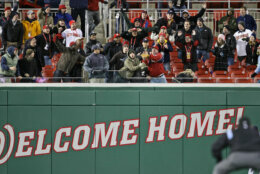 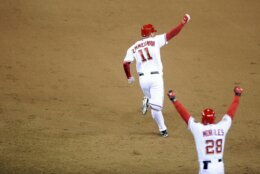 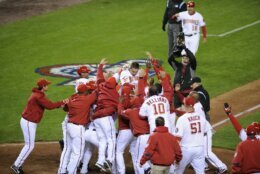 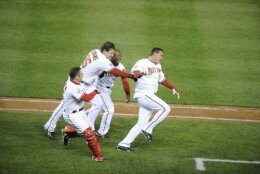 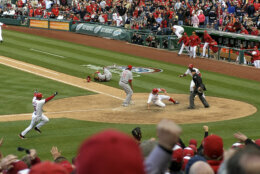 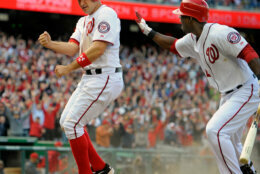 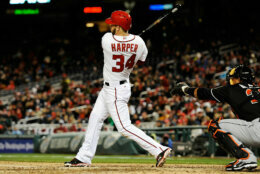 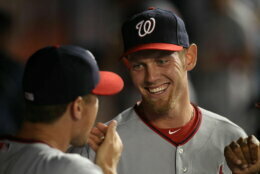 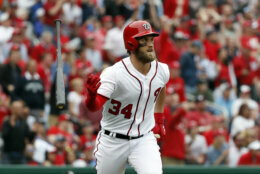 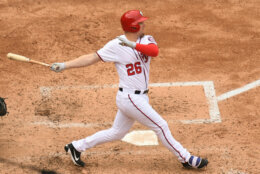 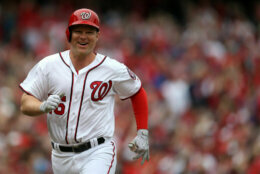 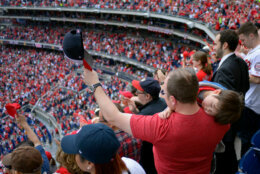 On a sun-splashed afternoon in D.C., the minds of Nationals fans across town likely got in a workout on Thursday. Their minds likely wandered to South Capitol Street where Washington’s Boys of Summer were to return Thursday for a home opener unlike any in franchise history.

Sometime in the 12 p.m. hour, the Nationals were to have stood along the first base line as trainers, coaches and players would have been introduced to a standing-room only crowd. Soon after, they would have unveiled their World Series banner and received their championship rings.

It would have been special, there is no doubt.

But with the coronavirus pandemic delaying the start of the season, it’s unclear when that day will now come. A best-case scenario, it seems, would be for Major League Baseball to begin a shortened season by midsummer.

So with a potentially spectacular afternoon put on hold, we’ve dug into the archives and put the spotlight on five previous home openers in Nationals history. We’ve also included several highlight calls from Charlie Slowes and Dave Jageler on the Nationals Radio Network.

Disclaimer: The Nationals are a modest 5-10 in home openers since 2005.

After opening their inaugural season in Washington with a nine-game road trip, the Nationals’ first game at RFK Stadium proved to be worth the wait.

Third baseman Vinny Castilla went 3-for-3 with a two-run triple in the fourth inning and a two-run homer in the sixth as the Nationals beat the Arizona Diamondbacks 5-3 before a sellout crowd of 45,596. Castilla finished a single shy of a cycle.

Livan Hernandez took a one-hitter into the ninth inning before surrending a three-run homer with one out. Chad Cordero recorded the final two outs for the save.

The Nationals opened their shiny new digs on South Capitol Street in 2008 with Ryan Zimmerman delivering an opening night win.

Zimmerman clubbed a solo homer with two outs in the bottom of the ninth as the Nationals walked-off the Atlanta Braves 3-2.

It was the fourth career walk-off blast for Zimmerman, who had already established himself as the face of the franchise and was starting to develop a reputation for late-game heroics. More than a decade later, Zimmerman has hit 11 career walk-off homers with the Nationals.

Zimmerman delivered the winning run again in the Nationals’ 2012 home opener. This time he came through with his legs rather than his bat, scoring the winning run from third base after a wild pitch from Reds reliever Alfredo Simon.

The Nationals beat Cincinnati 3-2, improving their record to 5-2 in a season that would culminate in an NL East title. Craig Stammen earned the win after striking out the side in the top of the 10th on just 10 pitches.

Bryce Harper homered in each of his first two at-bats of the season and Stephen Strasburg threw seven scoreless innings as the Nationals began their NL East title defense with a 2-0 win over the Miami Marlins.

Harper homered again on Opening Day in 2017, but Adam Lind had the biggest blast of the afternoon. With the Nationals trailing the Miami Marlins 2-1 in the seventh inning, Lind delivered a pinch-hit two-run homer in his Washington debut. The Nationals went on to beat Miami 4-2.