Jennifer King is the first Black woman to land a full-time coaching job in the NFL, a remarkable step in her progression from peering through a fence at her dream to actually living it.
Listen now to WTOP News WTOP.com | Alexa | Google Home | WTOP App | 103.5 FM

But she’s no stranger to making history. In an NFL season filled with unprecedented milestones, King’s fingerprints were on several.

Last September, she was a part of the first game in which there was a female official and a female assistant coach on each sideline. Then, there was the playoff game at FedEx Field between Washington and the eventual-Super Bowl champion Tampa Bay Buccaneers, the NFL’s first postseason game between teams each with female coaches.

King’s latest role as assistant running backs coach is a remarkable step in her progression from a young basketball coach peering through a fence at her dream to actually living it.

“Obviously, I get to combine my passions of coaching and football at the same time to be where I am now, so I’m definitely thankful,” King told WTOP.

That passion has always been apparent, especially to those closest to King.

“People will look at her now and won’t understand the struggle,” Scott Pioli, a former longtime NFL front office executive who is among King’s top mentors, told WTOP. “Jennifer’s story, her entire story, is incredibly inspiring for anyone and everyone.”

Just a few years ago, King, 36, was in and out of football, doing whatever she had to do to make ends meet.

She coached women’s basketball at Johnson and Wales University in Charlotte, North Carolina, but she also worked as a police officer, sold insurance for a time, and worked for Delta Air Lines.

While at Johnson and Wales — where she won a national championship in the last of her three seasons as head coach — her office was adjacent to the Carolina Panthers practice facility, and she often peered through the fence at practices.

King’s passion for football eventually got her on the other side of that fence. Through sheer hustle and networking, she met then-head coach Ron Rivera and was hired as a coaching intern with the Panthers.

“I hired her because she’s worked hard at it and she’s earned it; she volunteered and was around and didn’t get paid a dime at one point,” Rivera said last month before Washington’s playoff loss to the Buccaneers. “She just wanted to be there because she loved the game, and she had something to offer.”

That love started in Reidsville, North Carolina, where King grew up in a sports-loving family that encouraged her to play several sports. But she was dissuaded from competitive football over fears that she’d get hurt.

King didn’t give up her passion, though. After playing basketball in college, she went on to play in the Women’s Football Alliance, lining up at quarterback, receiver and safety over a 12-year career that ended with the D.C. Divas in 2019.

Though she loved playing receiver the most, she was most accomplished as quarterback of the Carolina Phoenix, amassing a 75-17 record in nine seasons, including an undefeated championship campaign in 2013.

King said she fell into the quarterback position because she developed an arm from playing softball as a kid, and her football knowledge made her a natural fit as a team’s signal caller. “I embraced it once I started,” she said.

That taste for leadership and sterling track record made for a natural transition to coaching, where King was an assistant in the now-defunct Alliance of American Football in between stints as an intern with the Panthers.

Her coaching career initially ran concurrent with her playing career, which King said actually gave her some sway with the players she was coaching.

“When I had the opportunity to start coaching football, I definitely think the playing background helped bring some validity to me [as a coach], and I walked in with a lot of confidence,” King said, adding that her confidence, in part, stemmed from having coached football before at lower levels.

‘Being my authentic self’

In a league that has a diversity problem among the head coaching ranks and has a double standard adversely impacting Black quarterbacks, King is secure in being herself.

King describes herself as simple and laid back, has an eclectic taste in music, and enjoys comedy and action films — she cites “Game of Thrones” and “The Mandalorian” as current favorites — when she’s not coaching.

“I think being my authentic self has gotten me to where I am today,” King said. “And I saw that early on in my coaching career … being with people to build those organic relationships with players and everyone else around you creates success.”

That authenticity was apparent to Pioli in 2018, when he met King at the Women’s Careers in Football Forum, an annual meeting designed by the NFL to “support the development of a talent pipeline” of women in the highest levels of football.

Pioli said he and King hit it off immediately.
“She had this great ability to be ambitious yet respectful,” Pioli said. “I could tell quickly that she understood the game, she loved the game itself. She wasn’t necessarily focused on being someone who had to go to the NFL; she wanted to be a ball coach … which told me that she was in it for the love of coaching and the love of football, not necessarily the trappings that could potentially come with working in the NFL.”

King emphasized the importance of the teaching aspect of coaching, and said it has been an integral part of her rise to her historic position in Washington.

“I’ve been able to build some really good relationships with the guys that I’ve coached, and I think that’s been super important and part of my success as a coach,” she said.

“She’s a great communicator; she is a very transparent person,” Pioli said. “You know who she is as soon as you talk to her … she’s not trying to game anything; she is who she is. And her background is so unique and you watch the things that she has done to get to where she wants to be.”

Pioli added: “She has a servant’s heart … she loves people, she respects people and she wants to make the world a better place through her own personal passions.”

Aiding King’s rise through the ranks is the fact that the Washington Football Team has fast become one of the most diverse franchises in the NFL.

Last year, Jason Wright became the first Black team president in league history, and Julie Donaldson was named senior vice president of media content, the first woman to be a regular on-air member of an NFL radio broadcast booth. Martin Mayhew was just named the franchise’s first Black general manager, and Rivera is one of only five minority head coaches in the NFL.

King said she’s “absolutely” honored to be a part of such a diverse organization.

“I think it’s no secret that diversity wins, and it’s really cool to see the NFL really taking that to heart,” she said. “The teams are really starting to see and open up their pools to everybody … diversify your staff to get those different perspectives and experiences from everybody. I think it’s paying off now as you see how many teams made the playoffs that had females on staff and the Black coordinators in the Super Bowl.”

Pioli, who won three Super Bowls as the top football executive with the New England Patriots in the early 2000s, said the confluence of a younger generation of decision-makers in the NFL and the success of teams with diverse staffs such as Tampa Bay, Kansas City and Washington should create more opportunities for women and minorities.

However, these decisions still ultimately lie with NFL owners who have largely failed miserably at properly adhering to the spirit of the league’s Rooney Rule, which was adopted in 2003 to improve diversity hiring.

“I’m an optimist and a realist,” Pioli said. “Yes, it’s going to make more possibilities, but we will always have to deal with those other people who are not good people.”

‘The sky is truly the limit for her’

A woman has yet to be a senior-position coach, a coordinator or head coach in the NFL.

King would love to be the first, but she’s keeping her eyes on the proverbial ball.

“You don’t want to look too far ahead in this coaching business or you might find yourself unemployed,” she said, which demonstrates elite-level coach-speak.

King may not want to discuss her career ambitions, but her mentors believe in her ability to break more glass ceilings.

“The sky is truly the limit for her,” Rivera said after King’s promotion in Washington. “She demonstrated all of the qualities that are needed to work full time on my staff. She is a hard worker, a great communicator and a quality person. Coach King is always eager to learn and has shown tremendous growth since starting here last season.”

Pioli, almost verbatim, echoed the sentiment that the sky is the limit for King, adding that she’s uniquely placed in a position to excel.

But King isn’t looking beyond the opportunity in Washington.

“It’s been a long time coming for me to get here,” King said. “I’ve learned a lot of lessons along the way, I’ve had some great mentors, I’ve worked with some great coaches, in basketball and football, so I’m just kind of putting it all together now and super happy to be in D.C.” 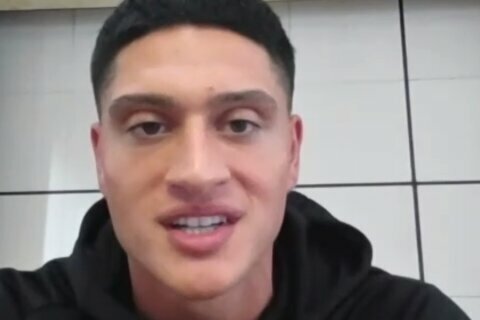