Turnout was strong as voters in Virginia selected the next governor, and also decided races for lieutenant governor, attorney general, the legislature and some local races and bond issues. Votes were also cast in Maryland for municipal races in several cities, including Annapolis. Find out how the day went.
(1/10) 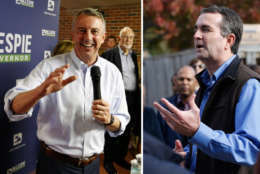 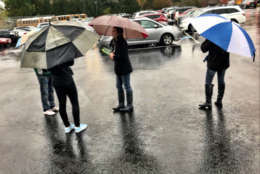 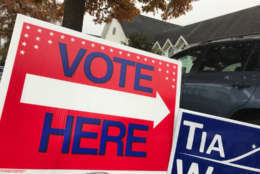 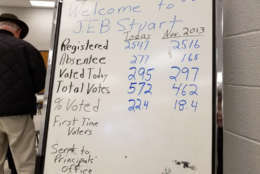 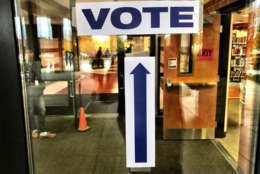 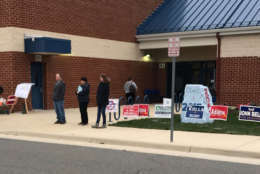 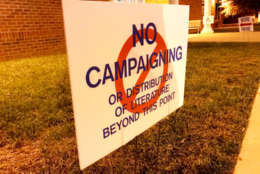 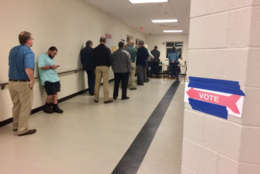 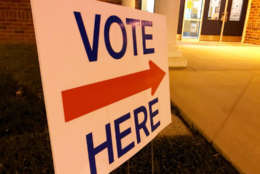 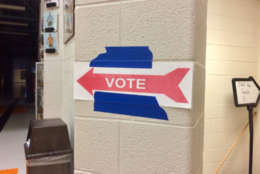 WASHINGTON — Elections officials in the WTOP listening area reported strong turnout despite rainy weather as voters headed to the polls to choose the next governor, as well as decide competitive races for delegate and statewide contests for attorney general and lieutenant governor and some local races and bond issues.

Polls closed at 7 p.m. in Virginia and 8 p.m. in Maryland, where voters in some cities, including Annapolis, decided contests for mayor and city council.

Stick with WTOP for live election results both on air and online.

An early CBS News exit poll found that 37 percent of Virginia voters considered health care the most important issue, topping the list, followed by gun policy at 17 percent, immigration and taxes at 14 percent each and abortion at 9 percent.

Gov. Terry McAuliffe wasn’t on the ballot, but 53 percent of voters approved of the job he’s doing.

Republican gubernatorial candidate Ed Gillespie made the removal of Confederate statues an issue in the campaign, and 36 percent of voters in the CBS exit poll said they should be removed, while 60 percent said they should be left in place. The numbers broke down along racial lines — black voters wanted the statues removed by a margin of 57 to 38 percent; white voters wanted them to stay by 27 to 70 percent.

Although a non-presidential election doesn’t typically draw as many voters, this year saw a record number of absentee ballots cast in an off-year election, and election officials contacted by WTOP said turnout numbers Tuesday were high.

The Fairfax City Board of Elections said turnout was at 56 percent. At about 5 p.m., Fairfax County reported that 39.1 percent of registered voters had already cast ballots. They estimated absentee turnout at 7.7 percent, which would add up to 46.8 percent — the same percentage of voters who turned out for the entire 2013 election.

Tuesday’s weather could be a factor in the election — it rained most of the day in most of the WTOP listening area.

Storm Team 4 meteorologist Lauryn Ricketts said that the heaviest rain left most of Virginia by 2 p.m., but showers and cold drizzle prevailed for the rest of the day of Virginia voting.

Turnout is one of the most important factors in any election, said longtime political reporter Bruce DePuyt.

“We live in such polarized times that for most people the issue isn’t ‘How will I vote?’ but ‘Will I vote?’ And so we know in broad terms how Northern Virginia and the urban areas are going to vote; we know how the rest of Virginia is going to vote. But what’s the intensity level? Who makes that decision to craft time in their day to cast a ballot?”

DePuyt said harsh weather “makes life more difficult for people who live in Northern Virginia, people with longer commutes on more congested roads — it can make it difficult to find the time to get to the polls before they close with all the other things that people have to balance in their lives.”

False information given to voters

Tuesday afternoon, election officials in Fairfax County said that some voters in Northern Virginia have received calls and text messages falsely telling them that their polling places have changed.

Steve Hunt, chairman of the Fairfax County Board of Elections, added that he had heard of such texts “second- and third-hand,” but couldn’t confirm any reports. He said that “We have not changed any precincts for this particular election.”

The president of the Prince William County NAACP, the Rev. Cozy Bailey, told WTOP that up to 40 members of his organization had also received robocalls telling them, falsely, that their polling places had changed.

And in Arlington County, WTOP’s own Carlos Prieto reports that his wife, Olivia, got a similar text:

House of Delegates seats in play

Tom Davis, a former Republican member of Congress from Virginia, who also chaired the House Republican campaign committee, expects Democrats will pick up a few Republican delegate seats on Tuesday. But if Republicans lose six or more delegate seats statewide, that could spell trouble for his party’s election hopes in 2018.

In the closely watched 13th District race, one of the most conservative members of the General Assembly, Bob Marshall, has faced an aggressive challenge from Danica Roem, a Prince William County journalist. If Roem wins, she’d become the first openly transgender official elected in Virginia.

‘Put it to better things’

The governor’s race was the main reason many early-morning voters voted in a non-presidential election this year, and a recent spate of negative ads from both candidates affected voters differently.

The tone of the race, which began congenially, turned bitter in recent weeks as both candidates flooded the airwaves and mailboxes with attack ads. But Davis said he didn’t expect it will make much difference in the end.

“The race is a real turnoff for voters — you’re choosing between a Nazi and an MS-13 member if you listen to the ads. I think it’s insulting to most Virginians,” Davis said. “Voters tend to tune that out.”

“This has been probably one of the ugliest races that we’ve seen in Virginia,” he said.

“Didn’t really watch any of it,” one voter at Liberty Elementary School in South Riding, Virginia, said of the negative advertising to WTOP. “I already know who I’m going to vote for and the rest of it is immaterial.”

Kathy Mintz, a voter in Nokesville who said the economy is the front-and-center issue for her, didn’t care for the attack ads.

“It’s horrible. Absolutely horrible. They could take that money that they spend on all of the negative ads and put it to better things, you know helping homeless people, helping the environment. It’s just ridiculous what they spend on this, the negative ads. I want to know what you stand for, I want to know what you think you’re going to do for the state of Virginia and whatnot,” Mintz told WTOP.

Virginia’s race for governor, featuring two establishment, moderate candidates, drew national attention, as it is seen as the first major test of voter sentiment one year into Donald Trump’s presidency and could foreshadow next year’s congressional races.

“Actually, this is the first time I’ve ever voted in a non-presidential election and it’s mainly because I dislike our current president so much that I would vote to oppose his administration as often as possible,” one voter in Chantilly said.

Other voters were inspired by the president in a different way.

“Now that we’ve got an administration in (the White House) that wants to do something and get things straightened out, we do have a chance,” Howard Counts, a voter in Nokesville, told WTOP.

Davis said, “This is an important victory for either party because it gives them bragging rights going into midterms trying to show a trend for their party.”

A win by Gillespie would threaten Democrats’ hopes of winning control of the U.S. House next year. A Northam victory would allow Democrats to claim that their party has the momentum going into the midterm elections, he said.

But in Virginia, redistricting is at stake as the next governor will oversee the drawing of new General Assembly and congressional district lines. Whoever controls the legislature will be able to draw districts to their advantage, Davis said.

Top of the ticket

Northam also led among independents and women, two critical voting blocs Gillespie would need to pull out a win, according to polling results from Quinnipiac and the Wason Center for Public Policy at Christopher Newport University.

Libertarian Cliff Hyra, a lawyer, has consistently ranked a distant third in polls ahead of Election Day.

Transportation, the economy and the fate of Confederate statues and monuments have been central issues this election season. Trump has also overshadowed the race: Northam has used Trump’s policies to try to fire up liberal voters and independents and Gillespie has embraced some of Trump’s policies and campaign tactics in an effort to woo the president’s supporters.