FAIRFAX, Va. — Recently, an Alexandria woman showed up at a Fairfax County court to face the consequence of not paying up while driving on the 495 Express Lanes.

Lisa Marie Comras took her case to court, but failed to appear, and thus a Fairfax County judge ruled against her.  Her bill: $10,751.40.

Under Virginia regulation, defendants can pay off the fines over time.  The size of the fine determines the time allowed.  For Comras, the court allowed her to pay over four years at $224 per month.

“I haven’t paid because I can’t, and really because I don’t want to either.  I am glad to pay the original tolls.  If I don’t, that would be a different story.  But it’s the fees,” says Comras.

She defaulted on the payments, so the Virginia DMV suspended her driver’s license and registration under Virginia code § 33.2-503.

“In the event such person fails to pay the required penalties, fees, and costs, the court shall notify the Commissioner of the Department of Motor Vehicles, who shall suspend all of the registration certificates and license plates issued for any motor vehicles registered solely in the name of such person,” reads the law.

Comras was shocked when she got the notice.

“It’s bad enough that the court is allowing this to happen, assessing all this money.  But they’re piling on, taking away your license over $14.  I didn’t do a DUI, an officer didn’t pull me over.”

But unless lawmakers change the statute, any court is permitted to ask the Virginia DMV to suspend the registration, license and plates of any Virginia driver with unpaid tolls.

Defendants can get their registration, plates and license restored after receiving this notice if they go back to the courthouse.  Clerks can work with the defendant to establish a new deal with a lender whereby the person can negotiate less money per month over a longer period of time.  However, if the person makes a new deal and misses any payment, their license and registration is suspended again until the full bill is paid up.

Comras did not qualify for the First Time Forgiveness Program because her case was heard before the program was put into place.

“This customer’s case highlights the importance of ensuring that your E-ZPass account is funded. The vast majority of Express Lanes customers are using the road properly by keeping their account funded and their E-ZPass mounted –- only 4 percent of trips on 495 Express Lanes are unpaid and the majority of those trips are resolved prior to entering collections,” says Transurban spokesman Mike McGurk.

With the 95 Express Lanes opening, Transurban will forgive fees during the learning curve to the new rules.  Also, Transurban no longer pursues drivers for more than $2,200 under the new forgiveness program.

However, if someone uses the forgiveness program and then takes more trips on the Express Lanes without paying, Transurban could can take them to court.  If they lose, they could end up in a situation similar to Comras’.

In Maryland, those who don’t pay the toll for the Intercounty Connector get a $50 civil penalty for each trip and are taken to court by the Maryland Transportation Authority. If the driver has more than $1,000 in unpaid fines, Maryland will suspend the registration as well.

Neither state is permitted to take action against the license or registration of someone living in another state.

Weekend road and rail: Shutdown on Silver Line and stops on I-66 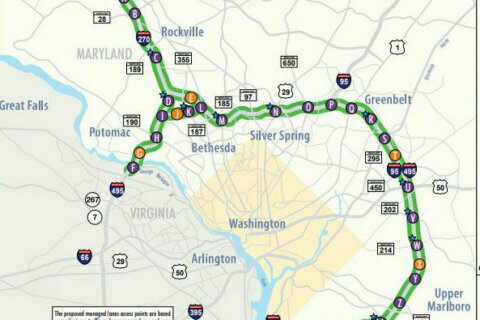