Amid a leadership shakeup at Metro, the transit agency says its plan to restore its long-sidelined 7000-series rail cars by late this summer remains on track.

Last October, a derailment on the Blue Line led to an investigation by the National Transportation Safety Board that found the wheelsets on Metro’s 7000-series rail cars were, for unknown reasons, shifting too far apart on their axles, making them prone to derailing.

The safety commission ordered Metro to remove all 7000-series cars from passenger service — reducing Metro’s fleet by 60% and leading to months of long wait times between trains.

In a series of tweets Thursday, the safety commission said the plan by Metro to return a limited number of 7000-series trains to service is based on new and improved inspection tools and procedures and more frequent inspections, including inspecting trains each day before the rail cars are put into service.

Other elements include procedures to limit the movement of rail cars out of rail yards only after they meet safety requirements spelled out in the plan.

Metro’s plan also includes the installation of sensors along the side of the tracks to automatically test the wheel-sets of the 7000-series rail cars as they pass by.

However, the plan Metro submitted Thursday does not include the use of automated wayside inspections systems, the commission said in a tweet. Plans for using those sensors will have to be submitted separately.

Earlier Thursday, Metro announced it had first installed the first of the automatic sensors on a stretch of tracks near the College Park station, and will begin configuring and testing the system.

Metro said in that announcement that its plan to restore some of the 7000-series cars by the end of the summer remains on schedule.

There is still no specific date.

Metro riders have faced grueling waits on the rails since last October’s derailment. Service on all lines runs every 20 minutes with the exception of the Red Line, which runs every 10 minutes.

Investigators have still not identified the root cause of the wheel issue plaguing the 7000-series rail cars. So far, Metro says, the investigation into the October derailment has not turned up any evidence of failures related to maintenance or manufacturing.

This is the second time Metro has submitted a plan for returning the 7000-series trains to the tracks.

Under the first plan submitted late last year, Metro began the process of gradually returning the trains to service, but the safety commission halted the plan and ordered Metro to again pull all the cars from the tracks, saying Metro was failing to properly follow its own plan for daily inspections.

The latest announcement of the plan to return the 7000-series cars is the first bit of good news for the transit agency after several days of worrisome developments.

Earlier this week, Metro revealed that nearly half of its 500 rail operators had lapsed safety recertifications, and said it was pulling 72 operators from service, because their recertifications were more than a year out-of-date.

Less than a day later, Wiedefeld announced his sudden retirement — more than a month ahead of the planned June 30 date — and the resignation of Chief Operating Officer Joe Leader.

Metro executive Andy Off is serving as interim general manager of the transit system until Randy Clarke takes the helm later this year.

Earlier this month, the Metro Board of Directors announced the hiring of Clarke, who’s currently the president and CEO of Capital Metro in Austin, Texas, to lead Metro. 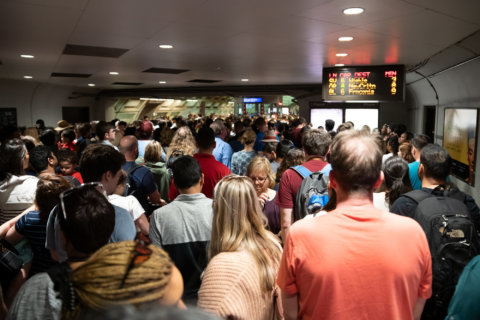