If college football programs cannot provide the safest possible experience for their athletes and create the cultures of personal responsibility they claim to foster, why should they exist?
Listen now to WTOP News WTOP.com | Alexa | Google Home | WTOP App | 103.5 FM

WASHINGTON — Football is exciting. It combines speed, athleticism and physicality in a way in which other sports simply do not. It is compelling. It is addictive.

But football is not special.

We are told, over and over, that the sport builds character in some way that other sports and activities do not. This mystical quality is used to justify the many horrors the sport inflicts on young men, particularly young men of color. It is a uniquely dangerous game that inflicts lifelong trauma, the extent of which we are only beginning to scratch the surface. It breeds toxic, abusive habits, which often only come to light in the wake of deaths like Jordan McNair’s at Maryland, exposing a broader cultural issue. And it has led to massive cover-ups at Penn State and Baylor, all in the name of football.

If this is the cost of football, we must ask what the gain is. And we must be honest when assessing that gain against other places where it might be made without so much widespread collateral damage.

In the many discussions I’ve had over the last few years while covering and reporting about brain injury in football, one thing has struck me the most — those who used to play the game are the least invested in preserving it for the future. That was true of both former NFL players Domonique Foxworth — who played at Maryland — and Chris Borland, speaking at an Aspen Institute panel earlier this year.

It’s also true for Chris Marks, Sports Director at CTV Sports in Prince George’s County, who played two seasons as a defensive back at Towson University. Marks suffered four diagnosed concussions between high school and college ball and has endured multiple surgeries after sustaining two microfractures in his knee and a broken hand.

“I love football. It’s been my favorite sport my whole life,” Marks, now in his early 40s, told WTOP. “I would do it to myself again. But if I saw my son going through what I went through, I couldn’t live with myself.”

Marks said his high school used to practice the now infamous Oklahoma drill, in which players charge each other in a confined space, generally three yards long and one yard wide. The drill ends when one of the players is knocked to the ground or out of the barriers. As an undersized DB with a history of concussions, Marks said he was spared from having to participate, as coaches were worried about risking further injury.

Another former professional athlete who doesn’t believe in the unique, transformative power of football is former NBA player John Amaechi. Now a professional psychologist, he studies these types of group dynamics for a living.

“Make no bones about it — football is no more powerful at changing a young person’s life than Zumba, which is no more powerful than chess club,” he told WTOP earlier this year. “Because the component that is important in all of that is the relationship that person has with the coach or teacher.”

Based on the reports out of Maryland, those relationships are broken. If the purpose of the game is, as Head Coach D.J. Durkin has said, to learn how to be accountable to others and to take ownership of your life, how is picking the hottest days of the year to run his team the hardest supposed to help? How is forcing a player to overeat to the point of vomiting — another allegation — a character-building exercise? Forget about the football — how is it supposed to make better men out the boys, whose safety and development has been entrusted to this group of coaches? How will it teach them to treat the people in their lives with respect?

When UMBC upset Virginia in the NCAA Tournament, one of the more interesting reactions came from school president Freeman Hrabowski III. He reminded everyone that athletics can, indeed, be a way to shine a light on everything else schools have to offer that actually matters. But when the sports themselves become the light — when a school finds itself directionless and entirely in the dark without the glow of its football (or, yes, basketball) program — there is a problem.

Penn State’s football program was so sacredly revered that it allowed a culture of sexual predation to exist for decades. Baylor’s turnaround success overshadowed a pervasive culture of sexual assault. How many programs across the country right now — practices closed off in secrecy, putting winning as the only priority — are enabling cultures of abuse for their athletes and endangering them or those around them?

Of course, it doesn’t have to be this way.

I once asked someone at Wisconsin — one of the most media-friendly programs — why they are the way they are.

His answer? “It’s just football, Matt. We’ve got kids trying to cure cancer on this campus.”

Perhaps the most disturbing aspect of the entire Maryland fiasco wasn’t even in the ESPN report that dropped last week. The Diamondback, Maryland’s student paper, reported that Durkin denied there was a link between concussions and CTE at a school event back in May, evidently citing an unreleased Department of Defense study (it’s unclear how he would have access to any such thing). That kind of ignorance is not just shocking, it’s potentially creating an environment that could lead to permanent brain damage for football players who, of course, aren’t even getting paid for their work.

Not only is football the only team sport in which head contact is a matter of course and is responsible for the highest incidence of diagnosed concussions, our ability to even diagnose non-obvious brain injury remains woefully inadequate. Just take the work being done at George Mason to try to identify protein markers in saliva from concussive events. Maybe the most startling revelation of that study was that youth football players with a high quantity of high velocity impacts over the course of a season without ever being diagnosed with a concussion presented the same biochemical autoimmune response to those who had been diagnosed with a concussion.

In other words, even the scientists are only beginning to understand the depths of damage being done. When a football coach claims to know better, you ought to wonder what else to question him about. Especially at public schools — where coaches’ salaries are paid by taxpayers, and where in 31 states, a college football coach is the highest-paid state employee — there must be more accountability.

Paul Finebaum has covered college football for decades. He is an insider, one of the sport’s biggest advocates. But even he was clear about the need for reform.

Is the culture of college football in question? pic.twitter.com/kjum0YK23s

“Too many things have been pushed under the rug for too long,” he said Monday on ESPN’s Outside the Lines. “Things have to change. We can’t keep doing things the way we’ve always done it.”

Football is not alone. There are issues in other sports, to be certain, and this is not meant to absolve any of that. But football is not special. It does not deserve special consideration or protection. In fact, because of its physical dangers it presents, the lives it has cost, and the continued revelations of the toxic cultures it has enabled, it deserves our utmost scrutiny.

If programs cannot prove themselves to be providing the safest possible environments for their unpaid athletes, if they cannot show that they are actually providing a societal benefit, then they simply don’t need to exist. 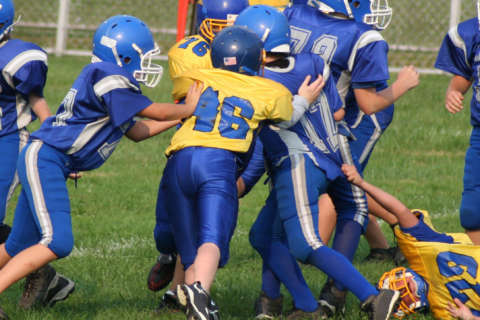 Maryland to introduce bill to ban tackle football under age 14