While a test is still a ways from being available to the public, the discovery of proteins in saliva activated by brain trauma is a big first step toward effectively diagnosing concussions.
Listen now to WTOP News WTOP.com | Alexa | Google Home | WTOP App | 103.5 FM

MANASSAS, Va. — What if you could know whether you had suffered a concussion — without any shadow of a doubt, and in just minutes — simply by spitting in a tube?

As the scope of potential short- and long-term damage from brain injuries in football becomes clearer every day, the mad scramble is on to try to address the crisis, which threatens the very existence of the sport.

And while the leading chronic traumatic encephalopathy, or CTE, research at Boston University has made the most headlines, two scientists at George Mason University have been working on a potentially groundbreaking diagnostic tool that could change the way we test for and treat brain injury across the sports world and beyond.

The way brain injuries are treated and managed is a nascent and evolving science, with the effectiveness of stopgap protocols being called into question on nearly a weekly basis during the football season. So, while the findings of the joint project between Dr. Shane Caswell, an athletic trainer, and Dr. Emanuel “Chip” Petricoin, a proteomics expert, are still a ways from translating to a marketable product, they shed new insight into a field that many are only beginning to understand.

Coming from entirely different sides of research at George Mason, Caswell and Petricoin may never have met if not for a chance encounter at a social event put on by the university to try to draw a pharmaceutical company to Prince William County back in 2011. Each heard the other speak about their work and both realized there might be an opportunity to work together across disciplines.

The Center for Applied Proteomics and Molecular Medicine, which sits on a nondescript, suburban highway in Manassas, largely focuses on oncological issues, using nanoparticle technology for early detection tests for breast cancer and even a urine test for tuberculosis for children in Africa. Petricoin had been called in as a subject review expert on an Army grant focusing on traumatic brain injury, or TBI, and realized there were protein biomarkers being discovered in subjects.

Knowing the tools already at his disposal in the lab, he saw an opportunity.

“What came out of it was a realization that the technologies and tools that we’re using to discover biomarkers for early detection of ovarian cancer could likely be used for TBI,” Petricoin said. “In fact, probably, we had better tools than the TBI community had been using before.”

The first test Petricoin’s team developed for the sports world came on the heels of the human growth hormone doping scandals in the early 2000s. At the time, the only way to look for HGH was to test cerebral spinal fluid, which involved, obviously, a highly impractical method of collection.

Petricoin’s team developed a test that could find even trace amounts of HGH in urine, something thought to be analytically impossible.

In the past, these nanoparticles have been used primarily as a delivery device, often to help bring needed medicine to a particular part of the body. The nanoparticles being used by Petricoin’s team function the opposite way, by going in and retracting the desired protein from a fluid like urine or saliva, no matter the trace amount.

“We actually reverse-engineered it — we don’t want to deliver anything. We want it to suck up and harvest these low-abundance biomarkers that are in biofluids like urine, but very dilute.”

Now, he’s applying the same science to discovering and detecting protein changes in the saliva for athletes with potential brain injuries.

As part of his concussion research, Caswell has been building a salivary biobank for years. That has allowed him to acquire data at baseline, before any injury, allowing him to monitor potential changes as a result of brain injuries. This could be crucial for more longitudinal research in the future, allowing him to see changes over the course of months or years following a brain injury.

“How does your biomarker fingerprint change as you’re developing, and are those changes typical? Are they related to potential injury that you might suffer? Those are questions that no one has the answer to,” he said.

Saliva is a particularly useful fluid for research due to how easy it is to acquire and test.

It’s especially useful for Caswell, who is one of the few brain injury researchers focusing on youth sports.

“But the largest number of participants are in youth and high school. And it’s very difficult to get access to those populations with invasive measures.”

How the test works

The salivary proteum contains about 1,500 proteins. When Petricoin and his team started exploring, they found themselves looking at a Hubble Space Telescope-like universe of previously undiscovered territory. That included about 400 brand-new, never before seen proteins.

“We’re plumbing new analytical depths of saliva,” Petricoin said. “Some of those proteins are the ones that we found, and they shouldn’t be there.”

So, how does the test work?

“Imagine if you had a swimming pool that was filled with baseballs and iron filings,” Petricoin said.

In this analogy, the iron filings are the proteins that would indicate a positive test. The nanoparticles are like mesh balls — magnetized to attract the proteins the researchers are looking for — dropped into the pool. The openings on the mesh ball are wide enough to allow the iron filings to slip through, but not enough to allow the baseballs in.

After dropping the nanoparticles into the metaphorical pool, you retrieve them, reverse the polarity on the magnet, and out spill the iron filings, or the proteins.

“We have protein biomarkers that appear to be differentially expressed in the saliva of individuals,” Petricoin said.

In layman’s terms: They have found proteins, about 10 different ones, that are appearing in saliva of kids with concussions that aren’t appearing in healthy brains.

But, perhaps more significantly, the researchers separated football players who were not actually diagnosed with any concussions into different groups, based on the frequency and force of impacts they encountered over the football season, measured by sensors in helmets.

“Is there something that we can identify in their saliva that would be indicative of changes in their biology that would be as a result of repetitive head trauma?”

Sure enough, they found similar proteins in the saliva of the high-quantity, high-velocity impact group that did not present any official concussion symptoms as those who actually suffered diagnosed concussions.

“Kids who had very few impacts looked different from kids who had a large volume of impacts over the course of the season,” Caswell said.

That certainly seems to support the idea that an eye-test sideline diagnosis is not adequate to determine whether or not a traumatic brain injury has occurred.

So, while football organizations from youth leagues to the NFL may employ a return-to-play protocol, the damage inflicted from contact may well not be able to be detected by the person administering an observational test.

Also disconcerting are the types of proteins Petricoin’s team has found. One, in particular, is a cell receptor only ever before found in brain tissue.

“I don’t want to say you have a piece of your brain in your saliva, but, biochemically, it’s like, your brain got knocked around, it released — cellularly — things that only came from there, and it’s in your saliva,” he said. “Pretty good indication things are going on.”

These results need to be independently validated, but both feel strongly that there’s a “there” there.

“They’re very intriguing, and we have an engine to get more samples,” Petricoin said, referring to the salivary bank. “We have a technology that’s finding some signal that seems to indicate maybe something’s going on here.”

The research is currently undergoing peer review by a group at Lund University in Sweden, headed up by a team that has done research into the autoimmune response that the body creates upon suffering a brain injury. They hope to have two academic papers published this spring — one on protein identification and one on the autoimmune side.

The hope is to secure funding to help develop and implement a test that they could deploy in the field as a trial to test utility with a local club or school system. That could take the form of a tube, or even a mouth guard that players wear that might turn a different color if certain proteins presented themselves.

Even if such a product makes it to market, both Caswell and Petricoin are cautious about anyone latching onto it as “the answer” to football’s concussion crisis.

“There’s never been a biomarker, not one biomarker ever — except death — that’s 100 percent sensitive and specific,” Petricoin said. “At the end of the day, we want to make sure the markers are rigorously validated, and we’re hesitant to be over-exuberant until we get that.”

But if the findings lead to a potential sideline test, it could revolutionize the way people manage brain injury, removing much of the uncertainty and fear that surrounds the issue today.

“I don’t think this is going to be a silver bullet that solves the concussion issue,” Caswell said. “But I think that a measure like this that could be ‘deployable,’ particularly on the field, I think could be very beneficial.” 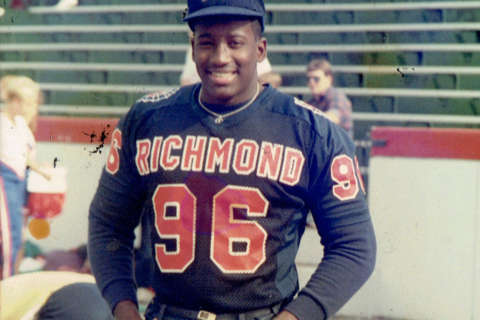