More than 40 people displaced after apartment blaze in Laurel 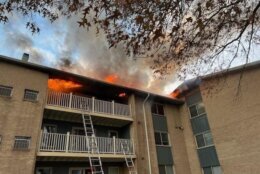 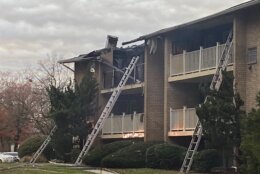 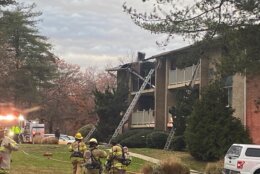 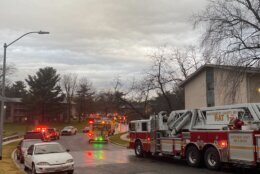 Over 40 people have been displaced after a two-alarm fire tore through an apartment complex in Laurel, Maryland, Wednesday afternoon.

The Prince George’s County Fire and EMS Department said it responded around 2:45 p.m. to the blaze on the 13000 block of Briarwood Drive near Oaklands Elementary School and Eisenhower Middle School.

Flames could be seen through the roof of the three-story building.

Anthony, who lives in a building next door, told WTOP that the fire could be seen coming out of the balcony area and reaching the roof.

“All the fire did with the wind blowing as it is did [was] nothing but spread and get even worse and worse to the point there was black smoke everywhere and flames everywhere,” he said.

The roof of an apartment on the back side of the building completely collapsed. As a result, firefighters spent most of their energy putting out hot spots near that unit.

Only one of the 12 apartment units in the building was vacant.

Prince George’s fire said in a tweet Wednesday evening it is assisting 44 residents affected by the fire. About 24 people in 12 units from an adjoining building can’t go back home until the county gives the OK to turn back on the electricity and gas.

While the damage where the fire started is significant, there were no injuries or deaths reported. Firefighters from Montgomery, Anne Arundel and Howard counties assisted with the response.

WTOP staff contributed to this report.