The new law enforcement leader in Montgomery County, Maryland, lobbied for the job of top cop Thursday, laying out his concerns and aspirations for a community that has expressed concerns about its police department.
Listen now to WTOP News WTOP.com | Alexa | Google Home | WTOP App | 103.5 FM

The new law enforcement leader in Montgomery County, Maryland, lobbied for the job of top cop Thursday, laying out his concerns and aspirations for a community that has expressed concerns about its police department.

Marcus Jones is serving as Montgomery County’s acting police chief, but he said he would like the title of “chief” to be permanent.

“I love this community,” Jones said. “I think I have the transformational style leadership to continue to lead the men and women of this great county.”

Jones, who is African American, pointed to racial tensions and other feelings of mistrust between officers and the public, saying he could work to form bridges between the two sides.

“I can lead us to build upon that trust and get people to better understand the relationship between us and them,” Jones said. “That’s the push that I will be moving forward with as it relates to being the chief of police.” 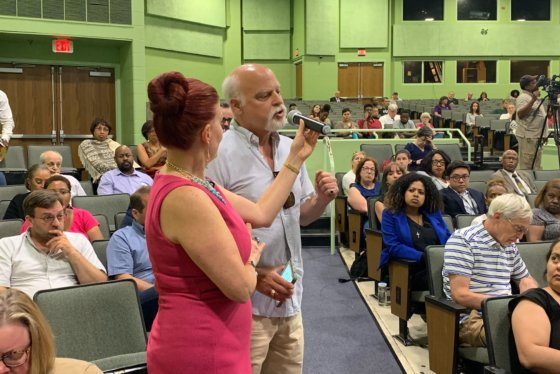 The gathering at John F. Kennedy High School in Silver Spring, Maryland, comes in the wake of high profile incidents involving police in the county.

Jones, 55, has held numerous positions in the department, including assistant police chief and captain.

He took the interim chief job just as the department was dealing with fallout from a white officer using the N-word during a conversation with a group of African American men.

One of the men initially said the slur and the officer said it back to him.

“She should have never repeated it,” Jones said. “I don’t think there’s any situation that’s permissible for us to use that language.”

Jones said the incident, which was captured on video, was being investigated and the officer was placed on desk duty.

“We’re still looking into it internally to address the matter as we would normally do for any case that involves possible discipline,” said Jones.

Another negative incident that recently led to protests against the police involved the 2018 shooting death of Robert White by an officer. The officer who fired the fatal shots was just cleared of any wrongdoing by investigators.

“I understand that we have some folks in our community who don’t trust us,” Jones said. “I’ve got some ideas that I’m planning that I think would be fruitful not only for the community but for our police department.”

Assistant Chief Russ Hamill was originally appointed interim chief, but he left the department in May to be the police chief in Laurel, Maryland.