Concerns over the fate of a probable historic site in Bethesda’s Westbard area led to demonstrations during a Montgomery County Planning Board meeting Thursday — and one official was urged to resign.
Listen now to WTOP News WTOP.com | Alexa | Google Home | WTOP App | 103.5 FM
(1/3) 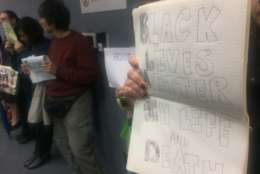 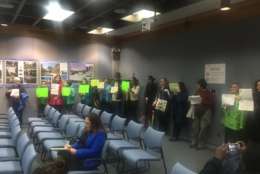 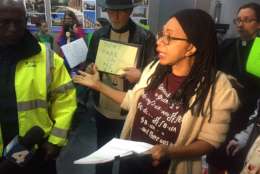 SILVER SPRING, Md. — Tensions are running high over a redevelopment project in Bethesda.

Demonstrators concerned with the fate of a probable historic site in Bethesda’s Westbard area, a former African-American enclave, interrupted a Thursday meeting of local leaders and called on one of them to resign.

About 20 protesters stood in the back and held signs during the Montgomery County Planning Board’s meeting in Silver Spring. As leaders heard an update about plans to investigate the cemetery site, one demonstrator interrupted.

That demonstrator, Marsha Coleman-Adebayo, is a member of Macedonia Baptist Church, which sits near the cemetery site and has historic ties to it.

Macedonia Baptist is one of Westbard’s last remaining symbols. In addition to preservation of the cemetery site, church members and supporters would like to see an African-American museum showcasing the area’s history as part of any resolution.

It is known that the site was at one time used as a graveyard and was sold in 1958, according to a Montgomery County Planning Board document. The site now sits under a parking lot, and was envisioned as being developed as part of a 1.8 million-square-foot residential, commercial and retail project.

Members of the community had not been informed that a developer-funded study of the site was moving ahead, said Coleman-Adebayo, who believes that the outcome of that study will be tainted. Others chanted for county Planning Director Gwen Wright to resign.

“Essentially what they want to do is throw some chicken bones on top of the cemetery, and come back and say there are no remains there,” she said, and county leaders’ decision to move forward with the study was an “intentional betrayal.”

“I think that the statement that [community members] were never told about the idea of the archaeological study moving forward is a direct lie,” said Wright, who added she is not resigning.

“I would just reiterate that we are the ones who essentially brought this issue to the church and that we are very, very committed to preserving what may remain of the cemetery and to commemorating it,” Wright said.

If human remains are found, Wright suggested, the site could be turned into parkland.

The investigation will involve researching historical maps and documents, the use of ground-penetrating radar and, possibly, excavation. It was hoped that academic researchers would conduct the study, but an agreement could not be made on the cost and scope, Wright said. The study is now being handled by an archaeological firm.

“We understand that it’s a sensitive issue, and I think we’re doing everything we can to be open and transparent about figuring out what might be under the ground at that location,” said Casey Anderson, Planning Board chair.

The initial phase of archaeological study, he said, is set to be done in June, about a month later than originally expected. County leaders, he added, are working to see whether a mediator could address community concerns. 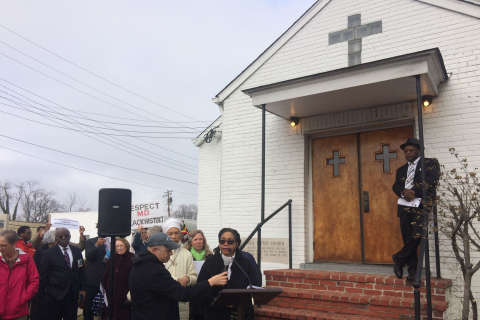