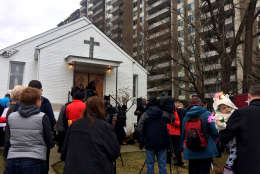 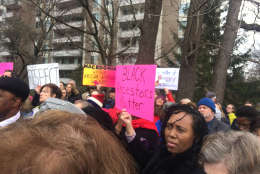 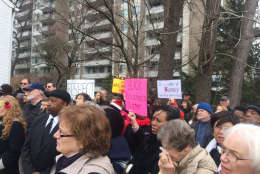 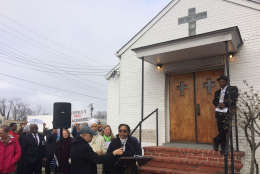 BETHESDA, Md. — Commuters might zoom past and not notice the small white-brick church atop a bluff on River Road, near Little Falls Parkway. Neighbors pull up at Talbert’s Ice and Beverage or scurry to the nearby Whole Foods and may not know a whit about the history around them and inside the predominantly African-American church.

The nearly 100-year-old Macedonia Baptist Church was the gathering place for what was once a thriving African-American community, which may have included liberated, previously enslaved African-Americans who became landowners in the area amid what is now affluent Bethesda-Chevy Chase.

Church elders say there’s written and oral history. The church’s African-American burial ground was desecrated in the 1950s when developers paved over it. Now they say development further threatens to disrespect the dead of the Baptist church.

“Around 1950, they decided to put a driveway on top of the cemetery and now they want to add a garage on top of the driveway,” said Marsha Coleman-Adebayo, head of the church’s Social Justice Ministry.

The church says its cemetery is beneath the pavement, behind the McDonald’s restaurant across the road. The land is slated for major development in the so-called Westbard Development Plan.

“It is so disrespectful and it is also very racist, quite frankly,” said Coleman-Adebayo.

Demonstrators filled the little church’s front yard Sunday afternoon demanding respect for the dead and protection of the African-American burial ground. The church’s plea may be striking a responsive chord.

“I’ve gotten very swift responses from elected officials who have expressed an interest and desire that we get to the bottom of this issue, so I’m hopeful,” said Julian Haffner, chair of the economic development committee, Montgomery County NAACP.

Montgomery County Council President Roger Berliner has written a letter to the county planning board saying that if the burial ground’s existence is confirmed, development must be reconfigured to honor and respect the site.

The area will undergo a scan by a ground-penetrating radar to determine if there are dead that lie beneath a driveway behind the fast food restaurant.

“I definitely believe that they’re going to get the due respect that they should be accorded,” Haffner said.