Michael Busch, the longest-serving Maryland House speaker in the state's history, has died at 72, according to his chief of staff.
Listen now to WTOP News WTOP.com | Alexa | Google Home | WTOP App | 103.5 FM
(1/4) 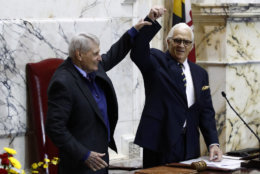 Busch, a Democrat who became speaker in 2003, had developed pneumonia after a follow-up procedure to a 2017 liver transplant after being diagnosed with nonalcoholic steatohepatitis, a liver disease. He also had heart bypass surgery in September, after experiencing shortness of breath.

Busch championed environmental measures to defend the Chesapeake Bay and fought for expanded health care. The state approved same-sex marriage and repealed the death penalty during Busch’s tenure as speaker. Legislation raising the state’s minimum wage was passed twice under his House leadership.

His environmental policies have been especially high-profile in recent days as he sponsored a bill to permanently protect five oyster sanctuaries under the law. The measure drew a veto from Gov. Larry Hogan, but the House overrode the veto Friday, and the Senate was expected to vote on an override Monday — the last day of the legislative session.

Hogan, a Republican, ordered flags to fly at half-staff for Busch and described him as “a giant in our government” with many legislative achievements.

“Speaker Busch and I came from different sides of the aisle, but we often came together in the best interests of the people of Maryland,” Hogan said. “He served with the decency and good nature of a teacher, a coach, and a family man. I was honored to know him and to work closely with him.”

“My heart is broken for Mike Busch’s family, the State of Maryland, and the Speaker’s extended family — elected officials and staff that he has been a mentor and coach to over his time in public service,” said Miller, a Democrat who has been battling prostate cancer. “Mike has been a friend for years, and has led the state to new heights of environmentalism and education.”

Sen. Chris Van Hollen (D, Md.), who served in the Maryland House of Delegates with Busch, released a statement Sunday honoring the late speaker. Van Hollen said he and others in the House used to fondly refer to Busch as “coach,” a testament to his ability to bring out the best in people.

“Maryland has lost one of her greatest champions today,” said Van Hollen in the statement. ” … Mike Busch was a titan of unstinting character who served the state he grew up in and did his job for Marylanders with passion, integrity, determination, and exuberance.”

Sen. Ben Cardin (D, Md.) also shared his condolences, saying that although they never served together in the Maryland House of Delegates, he witnessed Busch rise in his role in Annapolis and serve his community.

“Mike Busch was a force in Annapolis and he left a progressive imprint on the state that without hyperbole will last for generations,” said Cardin’s statement. “We have lost a dear friend and our hearts are broken while we mourn with his wife, his family, and his dedicated staff at the State Capitol.”

The Maryland Republican Party issued a statement Sunday evening saying they were “saddened” to hear of Busch’s passing.

“While we often didn’t agree, he was loved not only by his Democrat colleagues but by Republicans in the General Assembly as well due to his leadership style and caring nature,” Maryland Republican Party Chairman Dirk Haire said in the statement. ” … His impact won’t soon be forgotten.”

“Speaker Busch spent more than 30 years advocating on behalf of working families and children across our state,” said Alsobrooks in a statement. ” … He leaves behind a legacy that includes ensuring all Marylanders can earn a living wage, all children have access to health care and landmark funding for school systems across our state.”

“The Chesapeake Bay lost a champion today,” Prost said. “While there were many issues that were near and dear to Speaker Busch, he elevated saving the Bay to a priority for the General Assembly, and legislators followed his lead.”

Busch also was respected for his positions on health care.

Busch was first elected to the House in 1986. His district included the state capital of Annapolis, making him a frequent presence in the Maryland State House — even when the General Assembly wasn’t in session.

He was known as a consensus builder and good listener, qualities that helped him manage the diverse 141-member house of delegates for as long as he did.

He considered himself a progressive Democrat. He had a strong commitment to equal rights that resulted from growing up in the 1960s during the height of the civil rights movement against racial segregation.

“That was ingrained in me from my grandparents to my parents and through the ’60s,” he told The Associated Press in 2002.

At the time, he recalled two pictures on his grandparents’ mantel — Jesus and Franklin D. Roosevelt. Both sets of grandparents “believed that Roosevelt gave average people a piece of the American dream,” he said. “I really believe government is there to give people opportunity.”

Busch, a Catholic, was born in Baltimore, but lived in Anne Arundel County from age 10 until he left for college.

He was a record-setting running back at Temple University in 1969. His sports career peaked in his junior year when he ran for 185 yards against Bucknell University, setting a record that has since been broken. If it hadn’t been for a leg injury, he might have pursued a pro career. The Dallas Cowboys sent him a letter telling him that “you are being considered by our ballclub as one of our top draft choices,” but the team didn’t know his career was already over.

After getting a degree in education, he returned home and taught in public and parochial schools. He was a football and basketball coach at St. Mary’s High School in Annapolis before quitting teaching in 1979.

His interest in politics was whetted in 1982 when he was a driver for Robert Pascal, an unsuccessful Republican candidate for governor. Busch finished fifth among 12 Democrats running for three House seats that year, but he was elected to the House in 1986.