The departure of members of the athletic department is imminent, and university president Wallace Loh is also said to be on shaky ground. The problems and dysfunction documented in the report involve personnel he hired and was in charge of supervising.
Listen now to WTOP News WTOP.com | Alexa | Google Home | WTOP App | 103.5 FM

WASHINGTON — Maryland’s University System Board of Regents met again Friday afternoon in Baltimore with the futures of top leaders at the University of Maryland in even further doubt after a report concerning the culture around the football program was made public.

While the report said the football program in College Park wasn’t “toxic,” it was still quite damning, using words like “dysfunctional” to describe the athletic department as a whole.

It slammed former athletic director Kevin Anderson, as well as current athletic director Damon Evans, for presiding over a poor atmosphere that was rife with deceit and suspicion. And it knocked them both for a lack of oversight of the football program.

Even before Evans was promoted to athletic director, his job as a deputy athletic director included direct oversight of the football program — a task the report says he did not sufficiently fulfill.

The person who comes off the worst in the report is former strength and conditioning coach Rick Court, who primarily drew criticism and low ratings from current and former players. It says both student-athletes and even his former colleagues on the coaching staff had concerns about Court’s behavior and motivational tactics, though that sentiment wasn’t unanimous.

However, there seemed to be little to no oversight.

Head Coach Durkin, who is currently on administrative leave, told the committee that he didn’t feel he was Court’s direct supervisor, even though Court was Durkin’s first hire.

Other administrators in the department also felt Court fell under someone else’s supervision. During his time in College Park, Court was never given a performance review. In August, Court reached a buyout with the school and is no longer with the university.

Earlier this week, a more than seven-hour Board of Regents meeting concluded with a majority of regents ready to see the university move on from both Durkin and Evans, though figuring out how and at what cost was still to be determined.

Millions of dollars are potentially at stake.

The board further discussed things via teleconference Thursday, and was scheduled to meet in person again Friday. The Washington Post says Evans, as well as school President Wallace Loh, will be allowed to address the board and discuss their futures at that meeting.

Since the report’s release, a handful of Democratic state lawmakers have rallied to Loh’s defense, none more passionately than state Sen. Jim Rosapepe (D-D21), who organized a letter sent to the board arguing that Loh is being made a “scapegoat.” Rosapepe urged the board to take aim at personnel in the athletic department, and to “fix what’s broken, not break what’s working.”

Rosapepe told WTOP that “a whole group of legislators wrote to the regents and said, [firing Loh] ‘would be a huge mistake.'”

He said it would send a message that Maryland isn’t focused on “the big picture” — that instead of the flagship college campus being a driver of education, it was instead being consumed by the football program.

While Evans’ departure could be more imminent, Loh is also said to be on shaky ground. The problems and dysfunction documented in the report involve personnel he hired and was in charge of supervising.

Likewise, Loh’s handling of things in the aftermath of Jordan McNair’s death led the Board of Regents to take away his oversight of the current investigation.

Rosapepe is firm in his support of Loh.

“There are people who care more about sports than academics who are trying to push him out. Everybody knows that. That’s the problem,” Rosapepe told WTOP.

Gov. Larry Hogan said Friday that any changes to the leadership at College Park was “in the hands of the Board of Regents.”

“The way our government is set up, the governor has no involvement whatsoever. They’re a completely autonomous body that makes the decisions, they’re the ones that are reviewing the evidence,” Hogan said.

He declined to say whether or not there was anyone in a leadership position should be shown the door.

“I’ve done my very best to stay out of the process — that’s the way the law is,” Hogan said.

Maryland Senate President Mike Miller, who is a big supporter of the university in several facets, pointedly declined to comment on the situation through a spokesman. 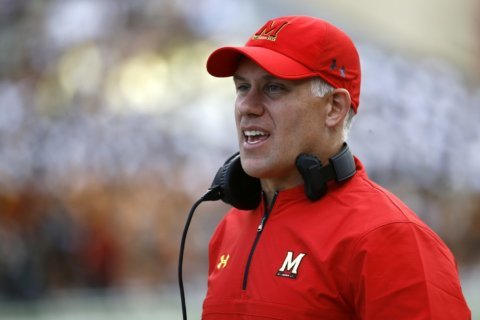