WASHINGTON — A Washington Suburban Sanitary Commission sewage pipe that broke Thursday, sending millions of gallons of waste water into Piscataway Creek that afternoon and evening, is still broken and it may take more than a week before it’s ultimately fixed. 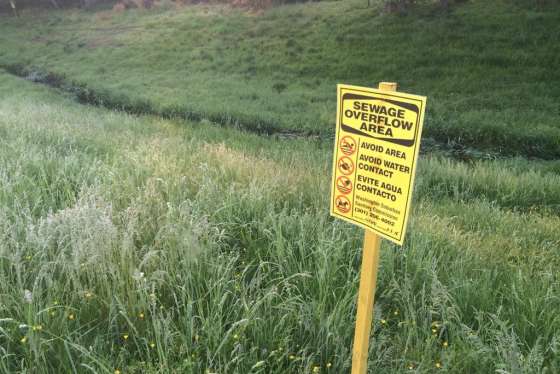 As of Friday morning, more than three million gallons of raw sewage had flowed from the site of the broken pipe, and that number will continue to grow, the Washington Suburban Sanitary Commission said.

By late Thursday night, WSSC had begun diverting the waste water into drainage basins on the site of the treatment plant in Accokeek, Maryland. From there, the utility started building temporary pipes to bypass the basins and send the waste water directly into the plant for treatment. Each pipeline is about 2,000 feet long, but only one is up and running.

“About half of it [the waste water] is going into the retention basins and half of it is moving through the 2,000 feet of temporary pipe,” said WSSC spokeswoman Lyn Riggins. With crews hard at work on a second pipeline, by midweek she expects all of the waste “to be flowing through the 4,000 feet of temporary pipe,” with the retention basins used as a backup.

But the permanent fix needed at the site of the broken sewer line is far more complex than your average water main repair.

“Sitting on top of that sewer main are high voltage electrical lines,” said Riggins. “So it’s not a simple fix where we can flip a switch and de-energize those lines.

“We’re working on a plan. We’ve been working around the clock through this weekend to figure out how we can do that. As soon as we can safely do that then we can dig down and start addressing the repairs on the broken sewer line.”

Those electrical lines are covered by plastic pipes, which are then encased in concrete. Just getting to them will be difficult.

“That’s the process that we’re working through right now,” said Riggins, “is to make the situation safe. We need to de-energize those high voltage lines right now.

“We have to deal with the electrical lines first, and then start addressing the repairs. That’s why it’s going to be a multiday, very complicated repair process.”

Over three-million gallons of sewage made it into Piscataway Creek Thursday, but Riggins stressed that all sewage, at this point, was either moving through temporary pipes directly to treatment or being contained in those special basins on the site of the plant.