One person died in an Ashburn fire that involved four homes. The fire was accidental and caused by the improper discarding of cigarettes outside the home.
Listen now to WTOP News WTOP.com | Alexa | Google Home | WTOP App | 103.5 FM
(1/4) 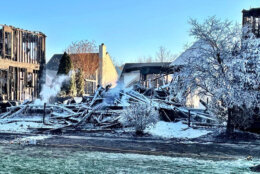 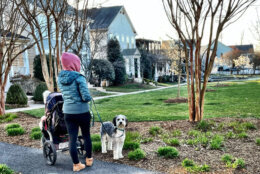 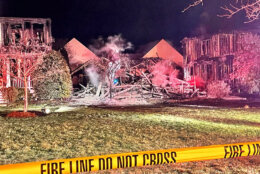 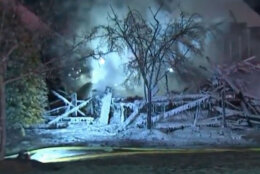 One person is dead and two people are in the hospital after a huge wind-driven fire in Ashburn, Virginia, tore through several homes early Tuesday.

Loudoun County firefighters said the two-alarm fire involved four homes — three of which have been completely destroyed. One has been reduced to rubble. The fire was reported in the 42900 block of Nashua Street.

One person was found dead inside the home where the fire started, according to a news release from the Loudoun County Fire and Rescue System. The victim’s identification and cause of death will be released after an investigation by the chief medical examiner’s office.

The Fire Marshal Office said the fire was accidental and caused by the improper discarding of cigarettes outside the home. Total damages related to the fire are estimated at $4 million.

Just before 1:30 a.m., callers to 911 reported the fire was quickly spreading from one home to neighboring houses, Loudoun County Fire and Rescue said.

When firefighters arrived, they said multiple floors of the single-family home were on fire and the flames were expanding to neighboring homes on both sides. The two-story house was burnt to the ground, with not much left except its foundation.

“When a house is that well involved with fire, there’s not a whole lot we can do to save the initial structure. We want to make sure that the people are as safe as they can be,” Deputy Fire Chief Jamie Cooper told WTOP’s Neal Augenstein.

With windy conditions, firefighters fought the fire from outside the house while some went inside the neighboring homes to look for people trapped.

“There was a couple of wind gusts that potentially impacted the initial fire and its spread to the neighboring houses,” Cooper said.

Two people inside the house that was consumed by fire were able to evacuate on their own.

Loudoun County spokeswoman Laura Rinehart said those two people were taken to MedStar Washington Burn Center. They are expected to be OK.

A firefighter was also treated for minor injuries, Cooper said.

Nine adults and two children are displaced, according to the news release. The Red Cross came to the neighborhood to help.