Purrfecting your down dog at cat yoga 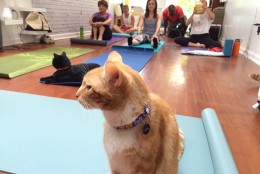 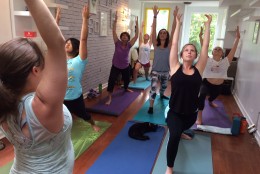 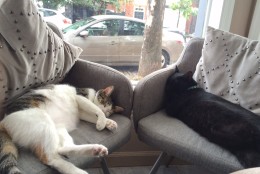 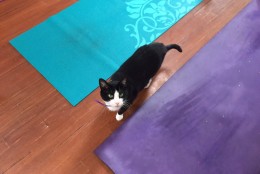 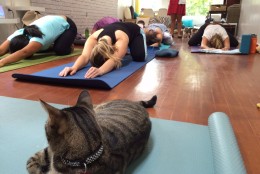 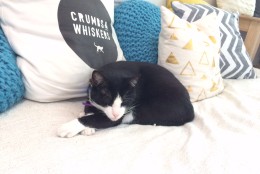 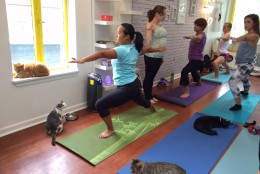 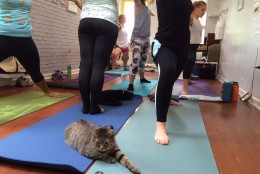 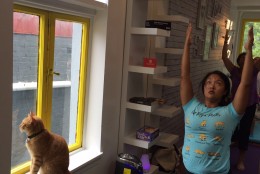 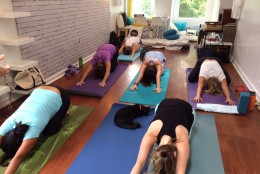 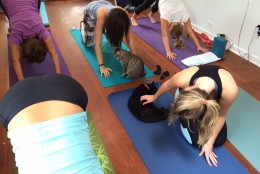 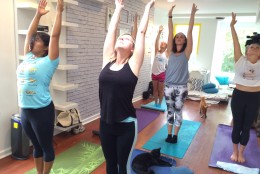 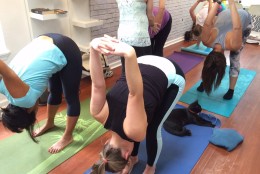 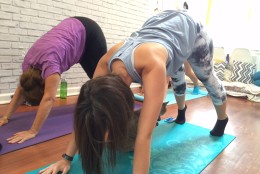 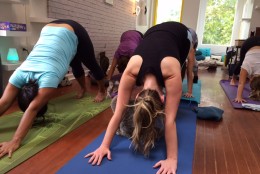 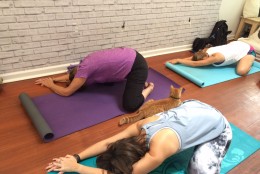 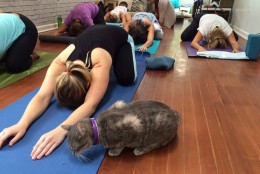 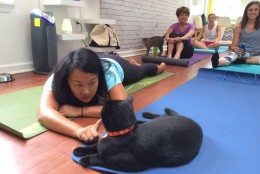 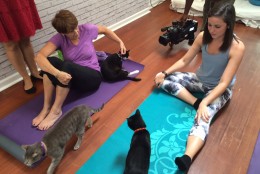 WASHINGTON — “Who wants to give the cats treats?”

Kanchan Singh waves a small box of kibble above her head on the second floor of Crumbs and Whiskers, a cat cafe in Georgetown.

Six women dressed in yoga pants take a break from adjusting their mats and snapping photos on their phones to raise their hands.

“That was a silly question,” Singh says. She passes out the treats and lets the group know that class will start shortly.

Five minutes later, yoga instructor Colure Caulfield takes her place at the front of the sunlit room and addresses the women.

“I would be prepared and ready for anything,” she says, calmly.

An orange and white cat sits directly below her feet and surveys the room.

“The cats have shown some interest in being on your mats and being in your face, so if it happens, it happens … that’s just part of the experience,” she adds.

Caulfield is leading Crumbs and Whiskers’ first cat yoga class. Yes, it’s exactly as it sounds: a yoga class in a room full of cats.

Singh, who is the founder and owner of Crumbs and Whiskers, says she decided to hold cat yoga because she knew it would appeal to a number of people.

“I think everyone, when they envision cats with yoga, they envision one awesome activity meeting the other — a mega-force of relaxation and happiness at the same time,” she says.

Her assumption basically sums up how Hannah Kolodner, 24, felt when she walked into the O Street NW building, just a few minutes before the start of class.

“This is everything; this is the greatest,” Kolodner said.

Like several other attendees, Kolodner took off from work to come to the Tuesday afternoon class.

“I don’t think I’ve ever even considered mixing together my two favorite things, which are fuzzy animals and yoga,” she says.

Cat yoga may be new to Crumbs and Whiskers, but it is not new to the world of cat cafes. Singh says she was inspired by a London cat cafe that hosts regular cat yoga classes. And every Tuesday, New York’s Meow Parlour holds a 90 minute “Yoga and Kitties” session.

“I’ve always kind of dreamed — and I am not kidding when I say this — of what it would be like doing yoga in a room full of cats,” Singh says.

But she wasn’t sure if D.C. was ready for it. So she put out some feelers on social media and soon had her answer: Washingtonians overwhelmingly want to practice their downward facing dogs in the company of cats.

“At least I’m not the only one who dreams about such things,” Singh says.

Caulfield has been teaching yoga for about five years, but Tuesday was her first time doing so in a room full of cats.

“This is new,” says the instructor at Down Dog Yoga, also in Georgetown.

But the partnership seemed like the purrfect fit. Caulfield says Down Dog does a lot of work with Lucky Dog Animal Rescue, so when she found out there was an opportunity to help cats, she didn’t hesitate for a second.

“I have a vested interest in anything that’s going to help cute little critters,” Caulfield says.

Crumbs and Whiskers acts as a foster home for overflow cats at the Washington Humane Society. Since it opened its doors on June 20, the business has placed 29 cats in permanent homes.

“And of course any chance to teach yoga and introduce more people to yoga,” Caulfield adds. “And if that happens to be in a venue filled with cats, then that works.”

Just as Singh predicted, the class started out with a few laughs. Participants giggled as furry tails brushed them in the face. Some awkwardly maneuvered their poses to avoid kicking a cat or collapsing on one while going into child’s pose.

At one point, Caulfield offered her mat to a woman whose own mat was taken over by a stretched out kitty, unfazed by the warriors, down dogs and chaturangas going on around him.

About 20 minutes into the class, most yogis were able to settle into the rhythm of Caulfield’s commands and focus on their movement, their breath and their poses.

But Singh says the real appeal of cat yoga is the end of class.

“You do yoga and you’re really relaxed and then all of a sudden you’re playing with cats, and you’re like, ‘Wow, life has not been better in a while,’” she says.

Tuesday’s two yoga classes were a “test,” Singh says. She wants to gauge participant reaction and demand before making yoga a regular event at the cat cafe. But if all goes according to plan, there will be additional opportunities to curl into a cat pose next to a feline friend.

“You don’t want to count your chickens before they hatch, but I can see them hatching,” Singh says. 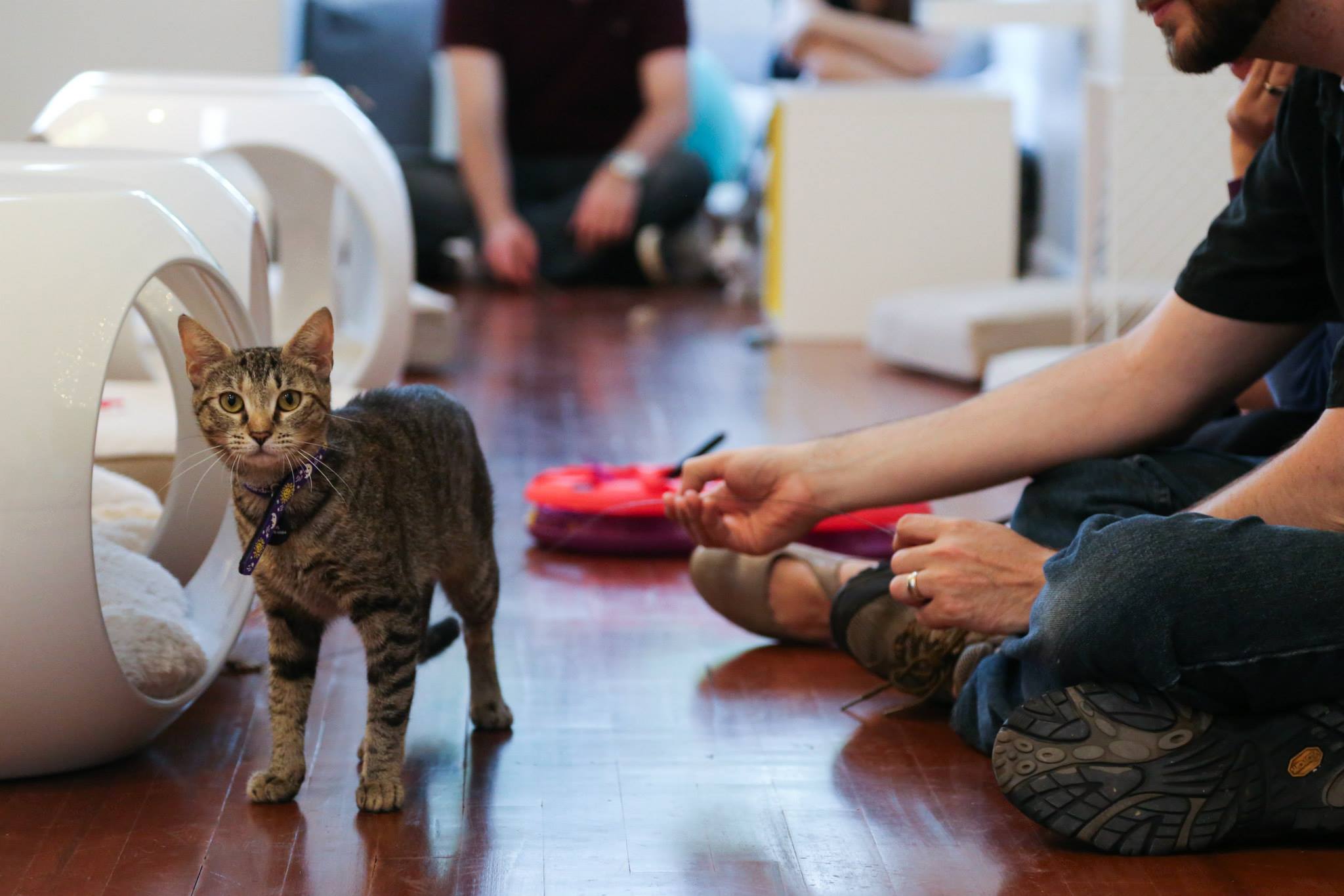 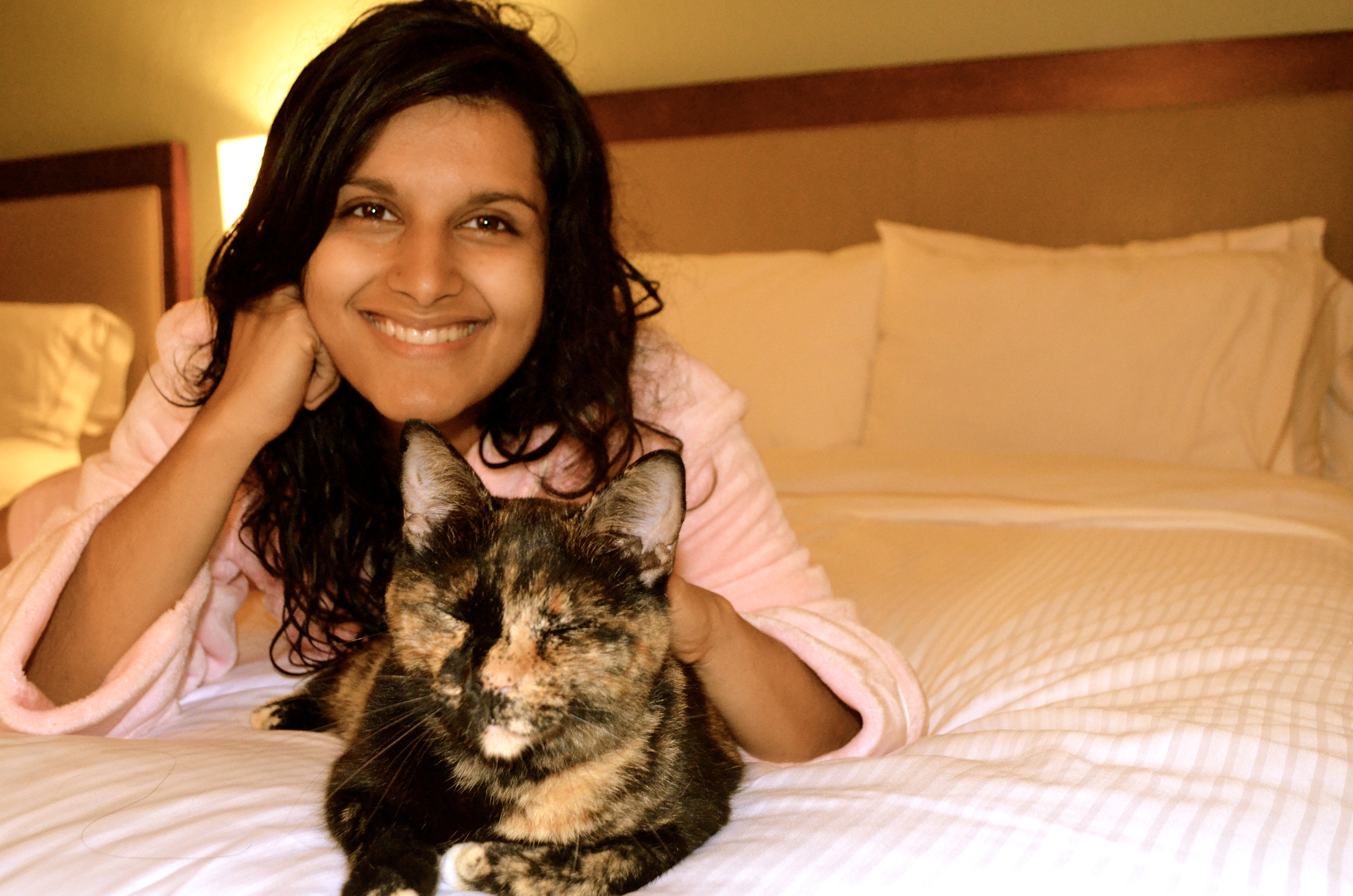