He’s stayed in the news, defying the tradition of former presidents abruptly falling off the radar upon their successor’s inauguration and despite the shutdown of his favored means of communication on Twitter.

That makes sense, given that no other former president has faced an impeachment trial. There are still fresh stories to be told about the riot by his supporters at the U.S. Capitol and questions remaining about how tightly he can maintain control of the Republican Party.

A debate in media circles over how much attention he should receive when he is out of power has been put on hold, probably for several more weeks.

“It’s virtually impossible to stop talking about Trump,” said Kelly McBride, National Public Radio public editor. “There’s still too many questions about what he did as president.”

Some had seemed ready, even eager, to turn the page.

On Nov. 8, the day after most news organizations declared Joe Biden had won the election, Psychology Today posted a plea on its website: “People in the Media: Please Stop Talking About Donald Trump.”

The day after he left office, McBride wrote a column headlined, “With a new president sworn in, should journalists now ignore Trump?” She concluded no, but offered specific recommendations for news organizations to avoid going overboard.

She’s since been surprised at the continued volume of Trump stories.

On Monday, The New York Times led the paper with a riveting, nearly 10,000-word account of how Trump pressed the false claim that he had won the election, leading up to his Jan. 6 rally shortly before supporters stormed the Capitol. Trump’s impeachment trial begins next week.

Headlines in the opinion section on The Washington Post’s website mentioned “Trump” or Trumpism” 14 times over the weekend, compared with 11 for Biden. The top news story online for The Post on Monday was about the turnover in Trump’s legal team for his impeachment trial.

Stories about Trump on websites monitored by the analytics and advertising company Taboola in January got nearly four times as much traffic as stories about Biden. Trump stories had at least double the amount of traffic almost every day of the month. That continued even after the inauguration, but at a lesser degree. The social media analytics company NewsWhip said stories about Biden have been interacted with 250 million times since Jan. 20, compared with 192 million for Trump.

Certainly, television networks that have enjoyed unprecedented ratings over the past five years don’t mind a delay in their expected day of reckoning, when executives worry about what will happen without Trump to talk about.

“He’s the one who gets everyone’s pulse rates racing and keeps people glued to the television,” said Mark Whitaker, former Newsweek editor and executive at CNN and NBC News.

NPR’s McBride can’t recall one story since Trump has left office that she would consider superfluous. Many are investigative, revealing important details about his administration and how he tried to overturn the election.

The Washington Post’s media columnist, Margaret Sullivan, in December offered her own advice to news organizations to detach themselves from a man who dominated their pages and airtime. “Don’t allow him to become a self-styled president in exile, the golf-cart version of Napoleon on Elba,” she wrote.

“I was not anticipating an insurrection and impeachment,” Sullivan said.

Politico magazine’s top story Friday was “The Antipope of Mar-a-Lago,” comparing Trump to Benedict XIII, a 15th century figure who claimed to be the rightful pontiff after being deposed twice.

By any definition, an impeachment trial of an ex-president, possible legal troubles and the question of his influence on the GOP’s future are major stories, said Blake Hounshell, managing editor for Washington and politics for Politico.

“That makes him impossible to ignore, as much as some people would like us to ignore him,” he said.

News organizations that try to push Trump news aside also run the risk of inflaming his voters, many of whom are quick to believe that journalists are biased against him.

Julie Pace, Washington bureau chief for The Associated Press, said that while it would be irresponsible not to cover impeachment and the riot’s aftermath, Biden is getting the bulk of the AP’s attention.

“We don’t cover former presidents the same way we do the president,” she said. After impeachment is over, the bulk of the AP’s Trump coverage will likely be handled by people covering the Republican Party.

Trump has remained out of view at his Florida resort and not given interviews; traditionally favored outlets Fox News Channel and Newsmax would not discuss whether they have asked him to appear on their air. Twitter cut off the former president’s account following the Jan. 6 Capitol riot.

“You just don’t feel his presence in the same way,” Whitaker said. “It’s not only deprived him of a way of communicating with his supporters, but news organizations don’t have a built-in excuse for giving attention to everything he says.”

Much of the early debate over how Trump should be treated as an ex-president centered on his tweets. As president, it was his way of keeping journalists on alert.

Without power, how much would those tweets be worth?

How long he’s capable of keeping quiet publicly is anybody’s guess. History suggests it’s not long. Meanwhile, he’s dominating many news cycles without being in control of them.

Chris Ruddy, Newsmax CEO and occasional Trump confidant, said he hasn’t spoken to him since he left office. He would advise Trump to stay above politics and talk about his administration’s accomplishments.

He isn’t interested in making his network “Trump TV” and senses many Newsmax viewers are ready to move on.

“I don’t think we’ve ever had a former president that has been interested in controlling the narrative after they leave,” Ruddy said. “But Trump has been so different than any other president and doesn’t follow the same rules.”

Bill Grueskin, a journalism professor at Columbia University, wrote after the election that if journalists give Trump agenda-setting power, they would risk allowing the Biden administration to skate by in its early days without the scrutiny it deserves.

He says now that he believes there’s a decent chance Trump’s influence will diminish as he fades from prominence after his impeachment trial.

“Then again, I was quoted in The New York Times back in 2012 that he could never get elected president,” Grueskin said. “So my track record is dubious.” 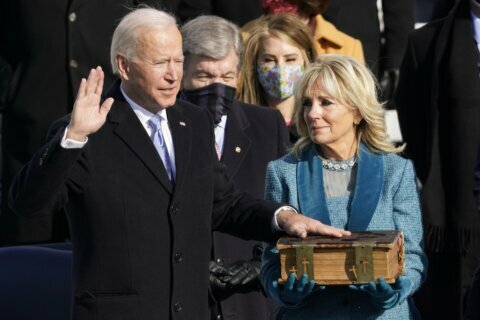