In a 3-2 vote, the Howard County Council on Monday night passed legislation that would end the county’s 25-year contract with U.S. Immigration and Customs Enforcement. But within the hour, County Executive Calvin Ball (D) announced he would veto the bill.

The legislation — known as CB51-2020 — was introduced by Council member Liz Walsh (D) in September. She cited a burgeoning series of protests against the contract over the summer as impetus to put a bill forward, and voted in favor of it Monday.

The long-standing contract allows ICE to house immigrants facing deportation at the Howard County Detention Center in Jessup for $110 per individual per day.

Council members Deb Jung (D) and Christiana Rigby (D) had previously confirmed to Maryland Matters that they supported the bill. Their votes in favor allowed it to pass Monday night.

But minutes after the council vote, Ball issued a statement in which he touted his reworked contract policy — whereby only violent convicted offenders can be housed by ICE at the county detention center.

He said the new policy “provided a practical long-term solution” for the county’s immigrant population, and argued that CB-51 would end a contract that made the state and county safer, while making it harder for detainees to “receive proper legal representation and access to their families.”

Council member Opel Jones (D) voted against the measure, saying in a statement that it didn’t sufficiently address where detainees in Howard County would be transferred to if the Jessup facility were no longer housing them. Jones’ statement quoted University of Maryland School of Law professor Maureen Sweeney.

If the contract were canceled, “‘There is no guarantee [ICE detainees] will be held in Maryland,’” Jones’ statement read. “‘They could end up far from support networks of family and friends in rural detention centers in Georgia, Virginia, Louisiana or North Carolina, with some of the worst reputations in the country for unsanitary, unsafe and abusive conditions.’”

In addition to Howard, Worcester and Frederick counties also have contracts with ICE, which allow them to house immigrants at their detention centers.

Howard County does not participate in the 287(g) program, which allows local law enforcement to collaborate with federal immigration enforcement efforts.

David Yungmann — the only Republican serving on the county council — also cast a vote against CB-51.

Though some immigration activists initially voiced support for Ball’s policy directive — CASA Executive Director Gustavo Torres said when it was announced that it indicated that, “everybody, regardless of immigration status — [is] welcome here,” others weren’t so readily convinced.

Leslie Salgado, chair of the Howard County-based group Friends of Latin America, criticized Ball’s policy for preserving the county’s relationship with an organization that she said criminalizes Latinos.

“Folks who have committed crimes have already gone through the regular justice system,” she told Maryland Matters last week.

Salgado said that a deportation order on top of a punitive jail sentence is not something a U.S. citizen would face, and that, “What we in the coalition are objecting to is the relationship between Howard County and this agency that violates human rights.”

During a news conference Friday, Walsh criticized Ball’s policy change on the grounds that it, “won’t stop harm to the family of the person detained. It does nothing to change ICE’s actions, but only modifies them slightly.”

Torres clarified his stance during the same news conference, saying that while he found Ball’s policy “a step in the right direction … We hope the county council and executive come together and sign CB-51. We find it totally unacceptable how people are detained.”

Immediately before the county’s legislative session began, immigrants’ rights activists gathered outside the George Howard Building in Ellicott City for a candlelight vigil aimed at swaying the county council to back Walsh’s bill.

During the event, CASA member Laura Arroyo — who said she has lived in Howard County for 14 years — said her husband had been deported from the county.

“I thank you all for being here and supporting us as immigrants,” Arroyo said in Spanish.

Maria Rivas, whose brother spent about five months detained at Jessup, urged the council to pass CB-51, saying, “We have the right to not be treated as criminals. We do not represent a danger to our communities.”

The county council’s next move on CB-51 with a pending veto from Ball remains up in the air.

But CASA immediately celebrated its passage last night, tweeting, “Howard County has long been recognized as a place where diversity is embraced and celebrated. Today, we can say we are one step closer to living this truth because of [Walsh].”

Horus Alas is freelance reporter and digital designer who graduated from the University of Maryland’s master’s program in journalism in December 2019. He has edited web content for NASA’s Glenn Research Center and reported for the Baltimore Brew, Capital News Service and The Diamondback. He can be reached at heliocentricnonchalance@gmail.com. 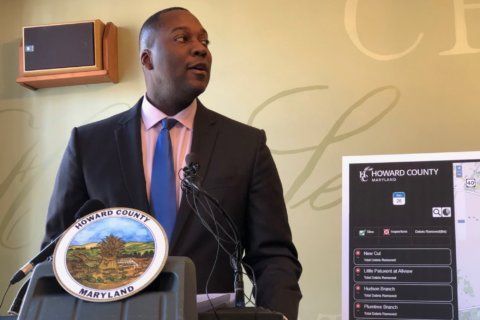