CLEVELAND, OHIO - APRIL 29: NFL Commissioner Roger Goodell announces Jamin Davis as the 19th selection by the Washington Football Team during round one of the 2021 NFL Draft at the Great Lakes Science Center on April 29, 2021 in Cleveland, Ohio. (Photo by Gregory Shamus/Getty Images)

The 2022 NFL Draft is as crucial for the Washington Commanders as it is unusual.

Ron Rivera enters Year 3 of his rebuild of the franchise on its third moniker and seventh starting quarterback since he took the reigns. With talk that no offensive skill positions will be taken in the top 10 of this year’s draft, Washington could have the pick of the litter at quarterback or wide receiver — but Rivera seems to think the former is less of a need thanks to the trade for Carson Wentz.

In order for Rivera’s third season in Washington to be a charm — as it was during his run in Carolina when his Panthers leapt to 12-4 in 2013 following a seven-win season — the Commanders will need to get immediate contributions from their first (11th overall) and second (No. 47) round selections.

Who could that be? Glad you asked.

As I’ve done in previous years, I’ll give you my top three choices for Washington’s first round pick and then go round-by-round for who I’d select with the Burgundy and Gold’s remaining picks. 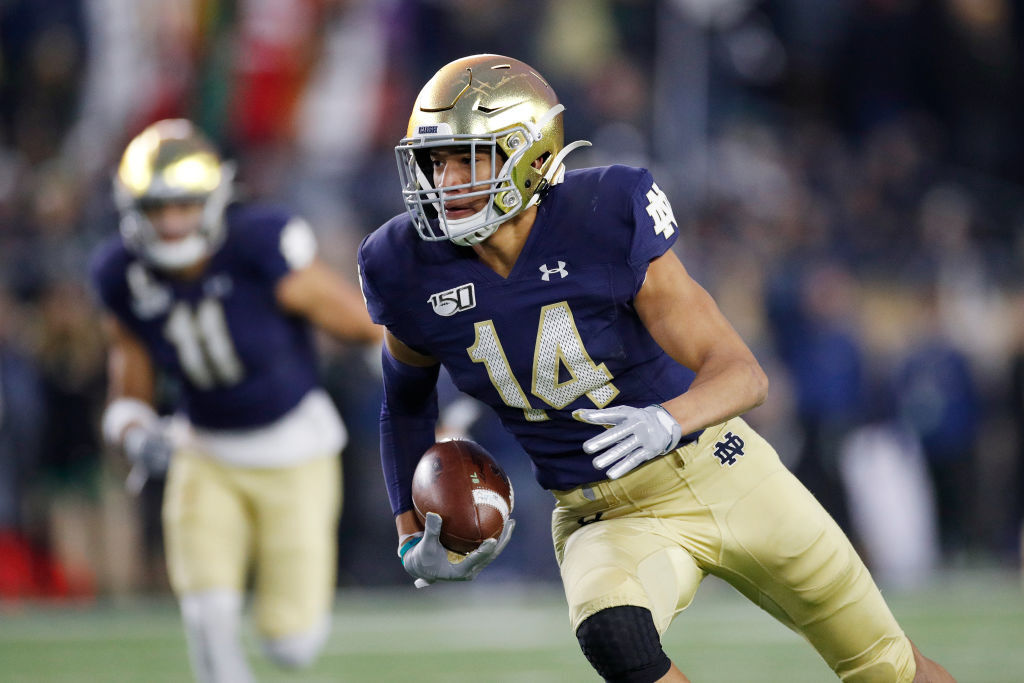 1/8
SOUTH BEND, IN – NOVEMBER 23: Kyle Hamilton #14 of the Notre Dame Fighting Irish runs with the ball after intercepting a pass against the Boston College Eagles in the second half at Notre Dame Stadium on November 23, 2019 in South Bend, Indiana. Notre Dame defeated Boston College 40-7. (Photo by Joe Robbins/Getty Images)

This safety is probably the safest pick for Washington.

Not only is Hamilton the consensus best safety prospect and overall top 10 talent, but he’s also a perfect match for Washington’s “Buffalo-nickel” — a hybrid linebacker/safety — and far more likely to embrace the role than was his predecessor Landon Collins. Hamilton would be a virtual lock to be at least a Week 1 starter and the Commanders are in dire need of playmakers on the back end of their defense. This would be an absolute steal at No. 11. 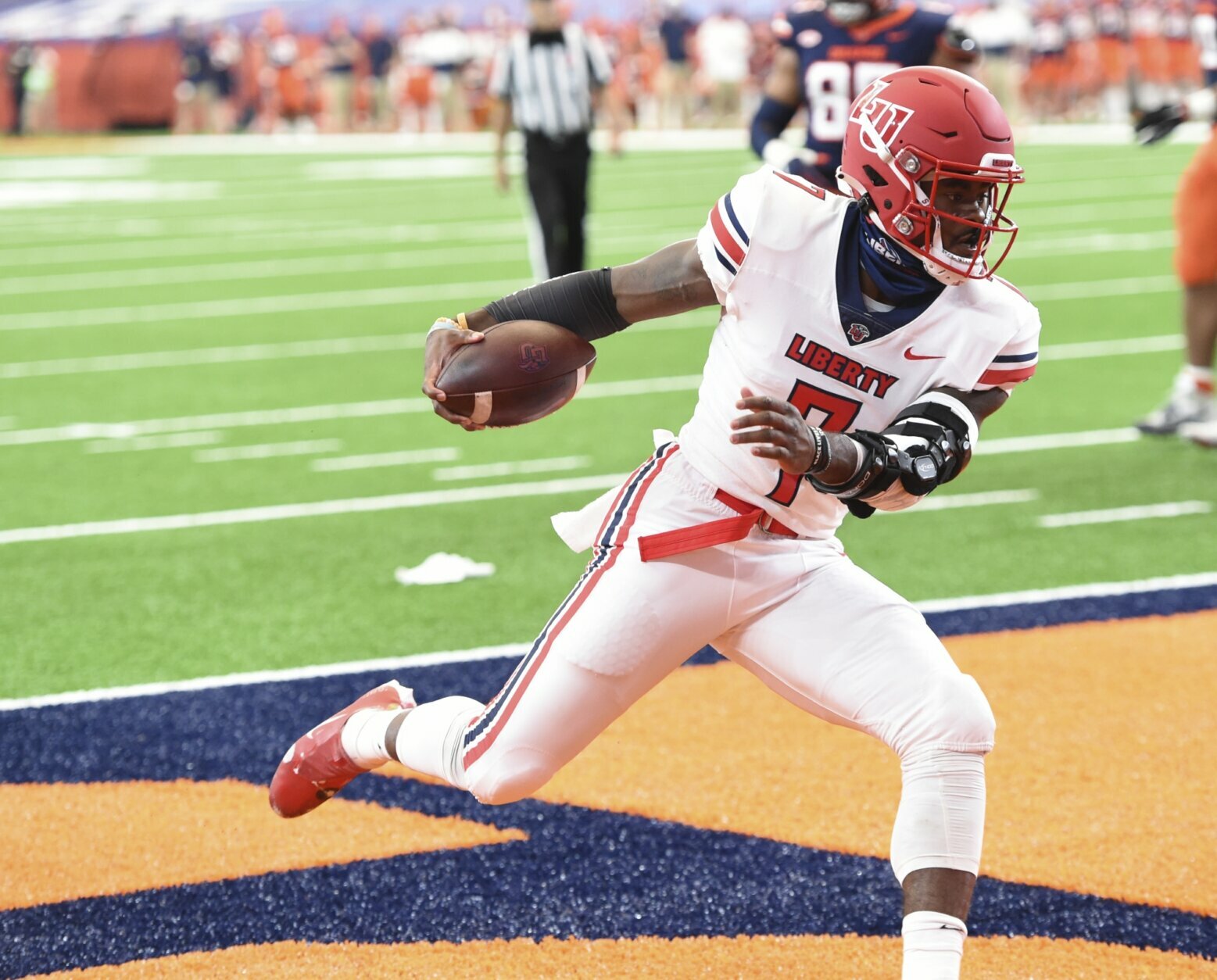 2/8
Liberty quarterback Malik Willis (7) scores a touchdown against Syracuse during the first half of an NCAA college football game against Liberty on Saturday, Oct 17, 2020, at the Carrier Dome in Syracuse, N.Y. (Dennis Nett/The Post-Standard via AP)

This is a dream pick for two reasons: 1) I doubt he’ll still be on the board here and 2) Washington seems to have fooled themselves into thinking Wentz has solved their problems at quarterback. Willis is considered a bit of a project but he’s got the highest ceiling of any of the QB prospects in this draft. If the Commanders punt on taking him at No. 11, it could be an infamous “what if” scenario of Mahomes-like proportions. 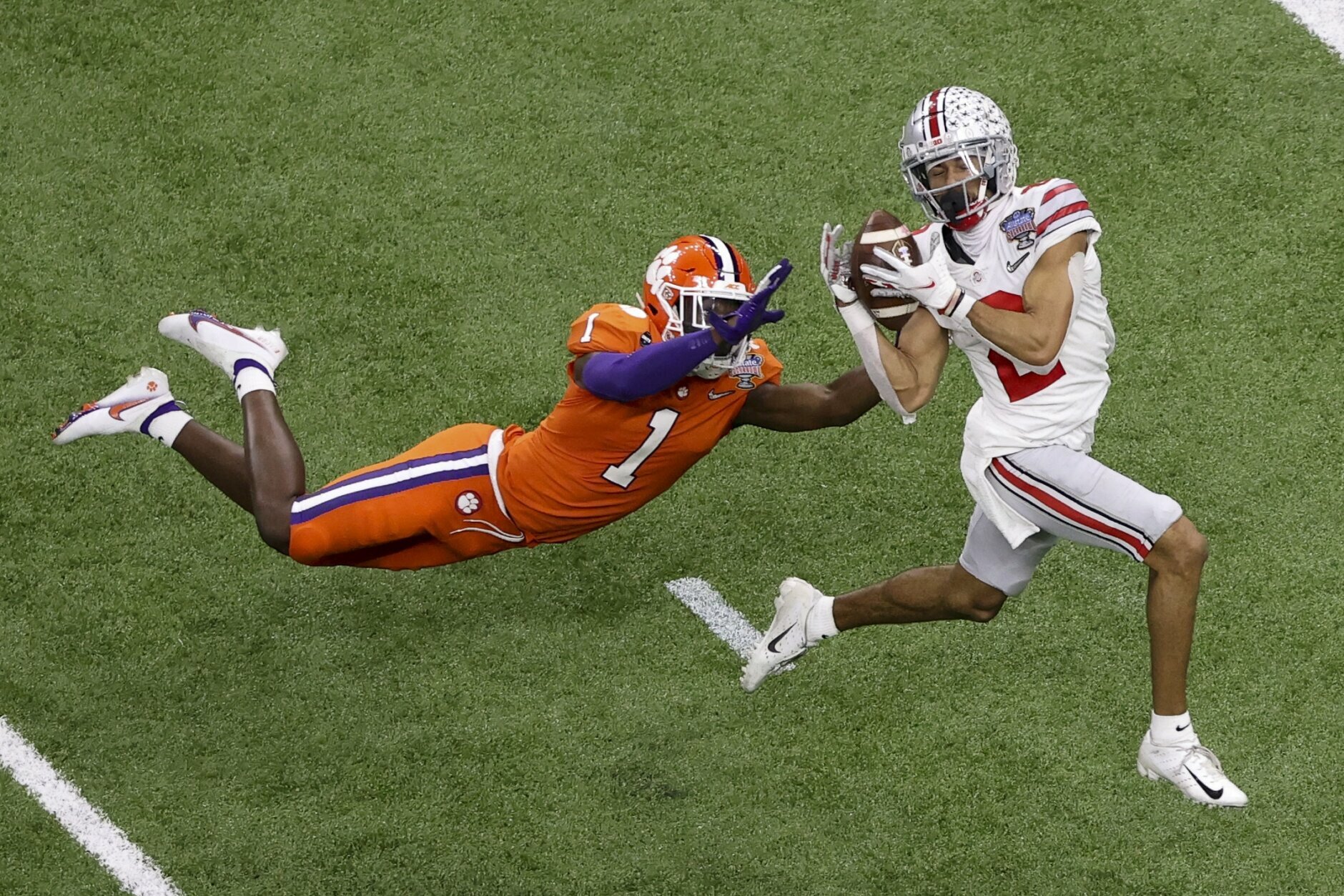 Between Terry McLaurin and Curtis Samuel, Washington has shown a slight obsession with Buckeye receivers — but this one is worth the symmetry if he doesn’t get picked in the top 10.

Full disclosure: I’m firmly in the camp that it would be a bad move for the Commanders to take a receiver at No. 11. This draft is considered deep enough at the position that Washington could get a good one in later rounds, plus I don’t believe the Burgundy and Gold need a WR as badly as many seem to think. McLaurin is on the brink of superstardom (assuming Wentz won’t be a total trainwreck), Samuel will almost certainly be better than his injury-riddled 2021 season implies and this coaching staff likes second-year speedster Dyami Brown.

But the only receiver I think is worth Washington’s while at No. 11 is Olave, an elite route-runner with all the tangibles and intangibles to be a difference-maker in the pros if he can bulk up his 6-foot, 187-pound frame. Also, Olave’s closest NFL comparison happens to be McLaurin so if Washington botches the contract negotiations with the latter, the former would be the perfect — and significantly cheaper — replacement. 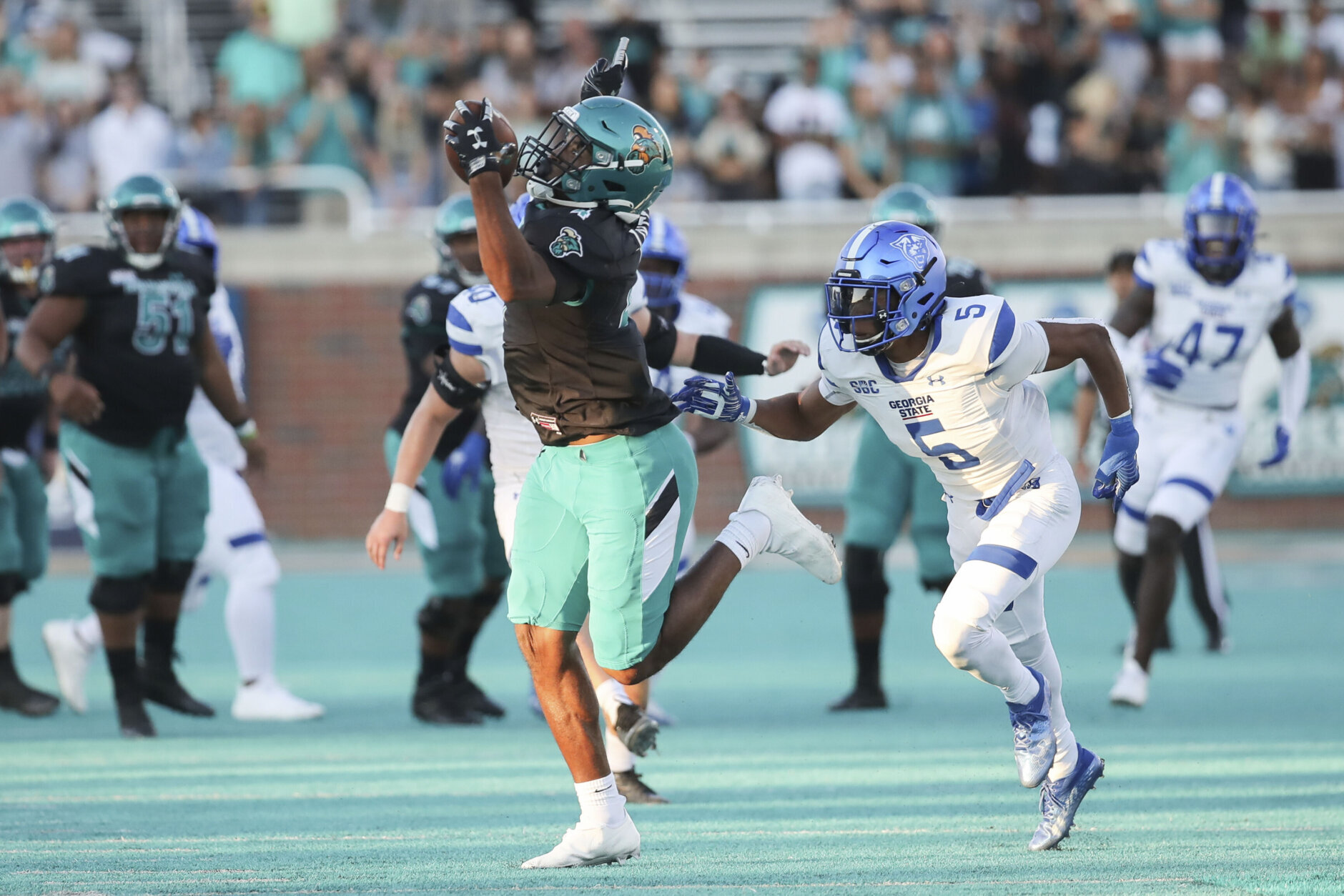 This comes off as a reach because he’s seen by some as a bit of a project. Likely’s size and/or blocking ability may be in question at the next level but his intangibles and character fall in line with the kind of player Rivera covets. Likely never had fewer than five touchdown catches in a college season so he could also serve as a strong red-zone alternative to Logan Thomas.

One caveat: Assuming they don’t get a QB in Round 1, don’t rule out Washington taking one here if, for some reason, one of the bigger names falls hard (though I seriously doubt any of them will). If Desmond Ridder is still available at No. 47, I’m enthusiastically sprinting (borderline frolicking, really) to the podium with his name on it, giggling like a schoolgirl the whole way. But I can’t see him lasting past Pittsburgh at No. 20 or Detroit at No. 32. 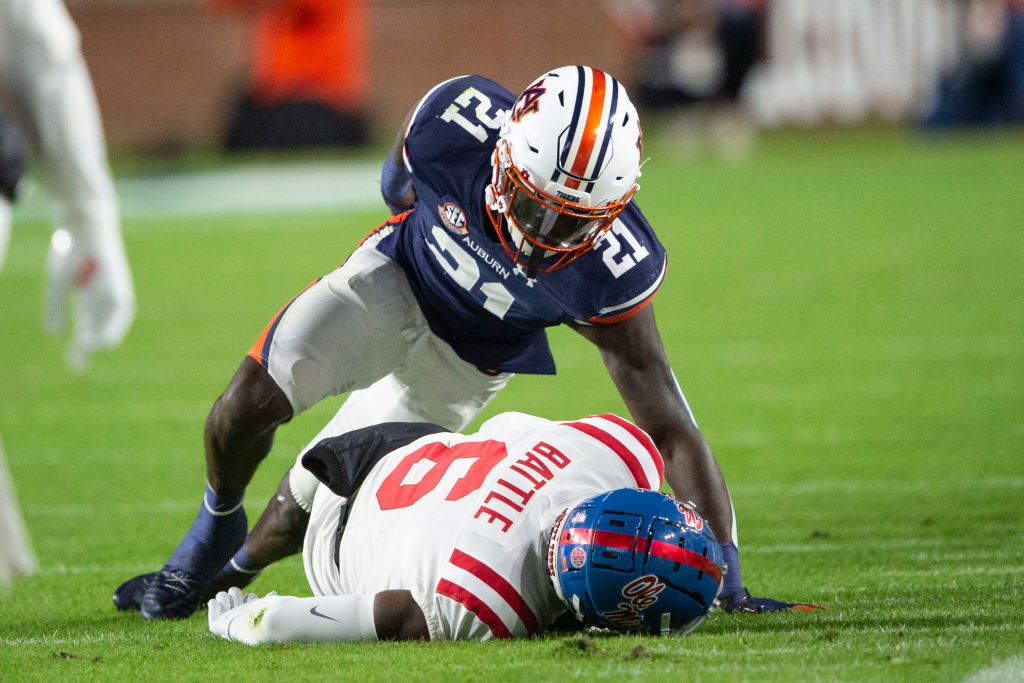 5/8
AUBURN, ALABAMA – OCTOBER 30: Safety Smoke Monday #21 of the Auburn Tigers tackles defensive back Miles Battle #6 of the Mississippi Rebels during the second quarter of play at Jordan-Hare Stadium on October 30, 2021 in Auburn, Alabama. (Photo by Michael Chang/Getty Images)

Aside from having a perfect name for a football player (and an ironic one should he play for a team that’s historically struggled so mightily in the primetime franchise that shares part of his name), Monday brings the kind of hard-hitting toughness ideal for the safety position. Given his talents are best utilized closer to the line of scrimmage, this could be nice depth for the “Buffalo nickel” position — or even a surprise rookie starter, a la Kam Curl two years ago. 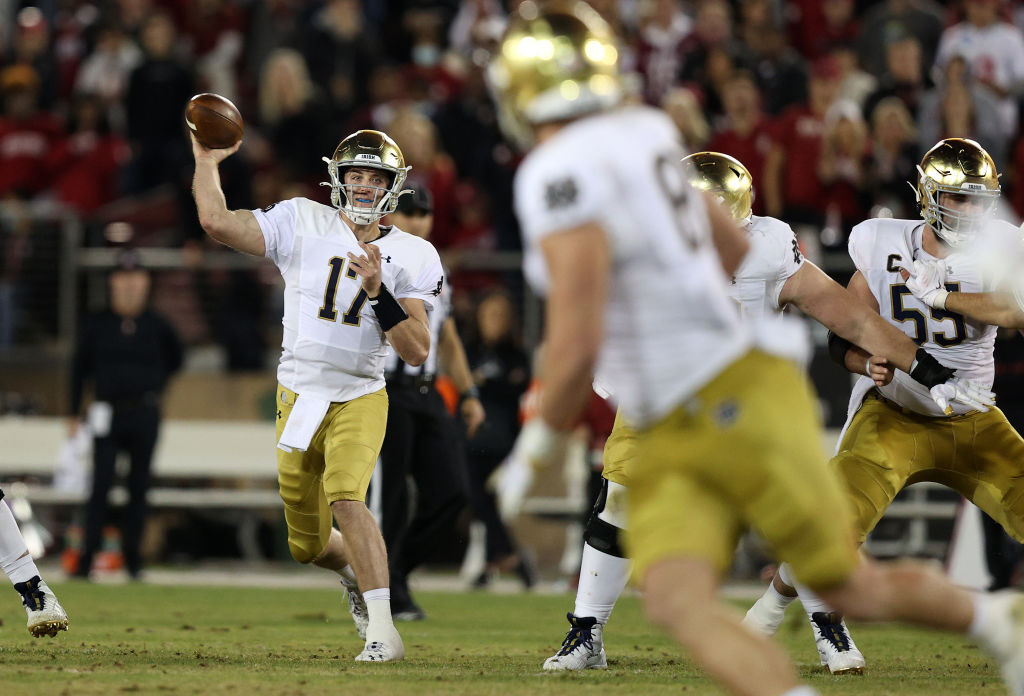 Could this be Washington’s Tom Brady tale?

Probably not — but Coan has two stats that signal a nice transition to the pro game: A 66.8 career completion percentage and a touchdown-to-interception ratio of 48:15, much of which he did in the Big Ten before his transfer from Wisconsin to Notre Dame. Under the right tutelage, Coan could be a developmental QB-turned-solid-starter like Kirk Cousins — which Washington will need when the Carson Wentz project inevitably blows up. 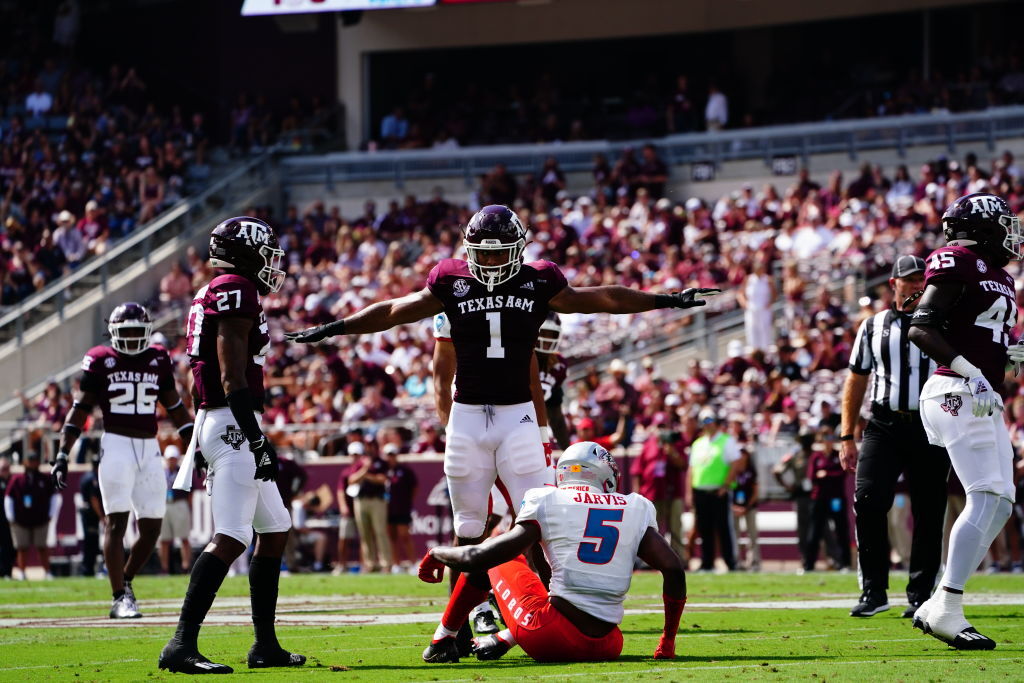 If this local product out of St. John’s College High School in Washington, D.C., is still on the board here, it could prove to be another fine late-round steal for Washington. Hansford’s speed and tackling ability translates to the pros but the Commanders’ defensive leadership — Rivera and defensive coordinator Jack Del Rio — is comprised of former linebackers uniquely suited to get the most out of a talent like Hansford. 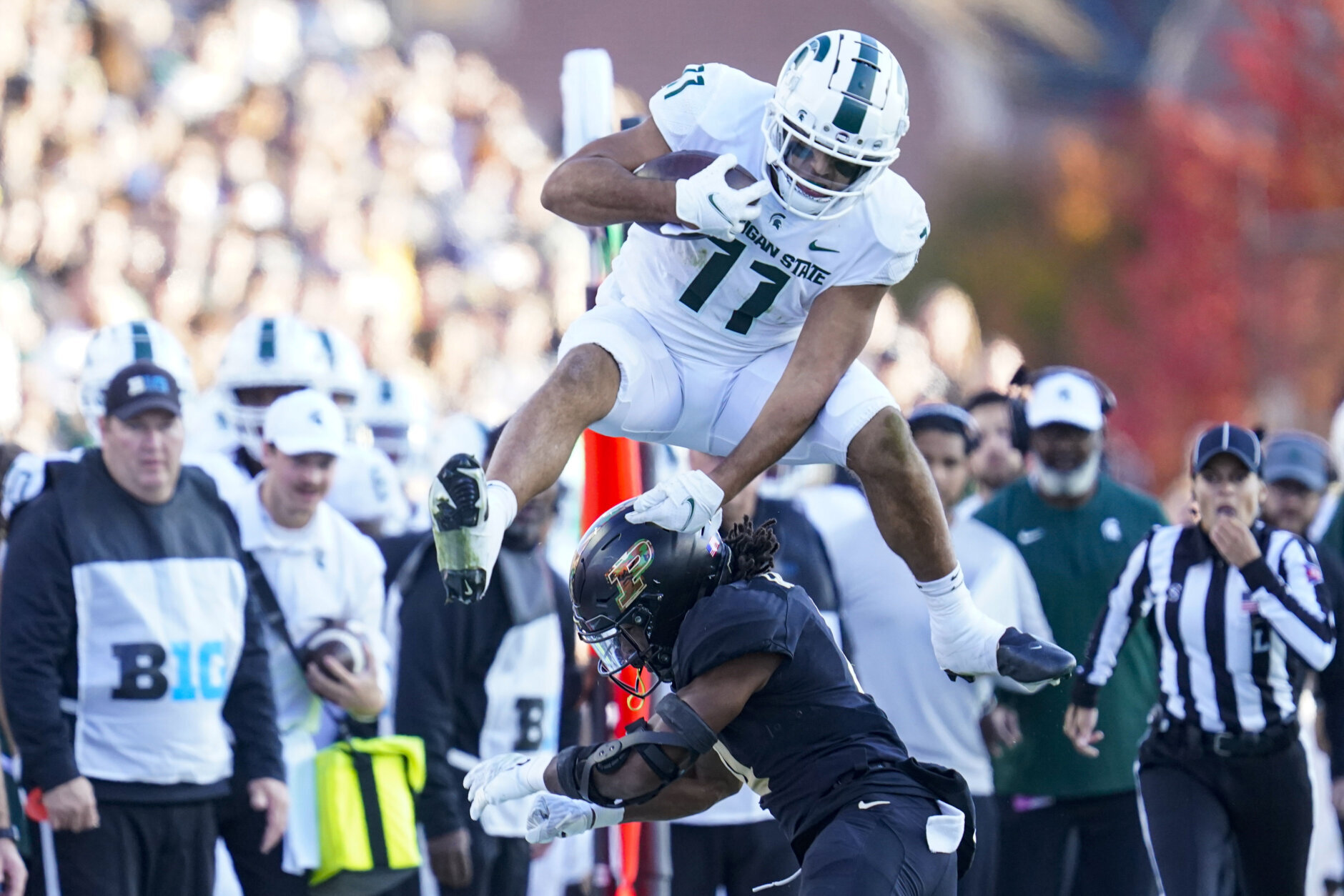 Heyward lacks the size (a top-heavy 5-foot-11, 233 pounds is the antitype for a tight end) and speed (4.72 in the 40-yard dash) to be anything more than a draft day afterthought — but he has the one thing Rivera loves in his players: Versatility.

Heyward is a former running back who can play in the backfield and at the line of scrimmage and comes from a famed football family (his brother is Steelers All-Pro Cameron Heyward and their father is the late Craig “Ironhead” Heyward). This would be Commanders fans’ new favorite training camp player. 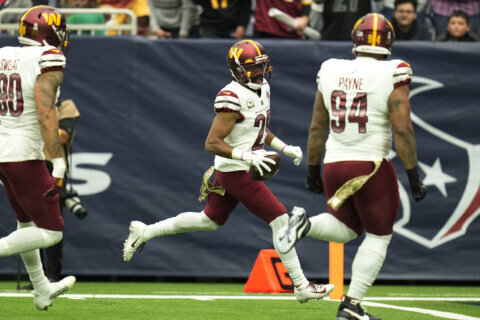 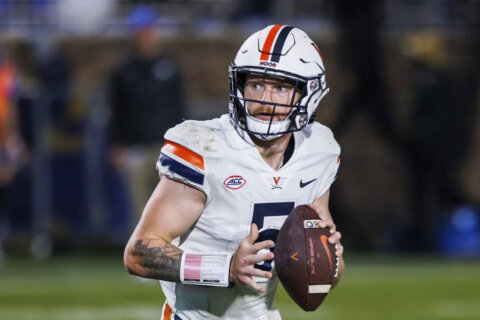