The pandemic pushed the 2020 Olympics into Summer 2021, leaving athletes to compete well outside of their comfort zone to realize lifelong dreams.

The D.C. area has no shortage of Olympians. In fact, this is considered a capital region for rowing, swimming and basketball — just to name a few sports. There are dozens of Olympic-caliber athletes in virtually every part of the D.C. area, and this gallery seeks to give them a spotlight heading into the games so we can root on our neighbors while they compete in Tokyo.

You already know Kevin Durant and Katie Ledecky (the latter was featured in a similar story in 2012 before her meteoric rise). Now meet some of their fellow D.C.-area Olympians. 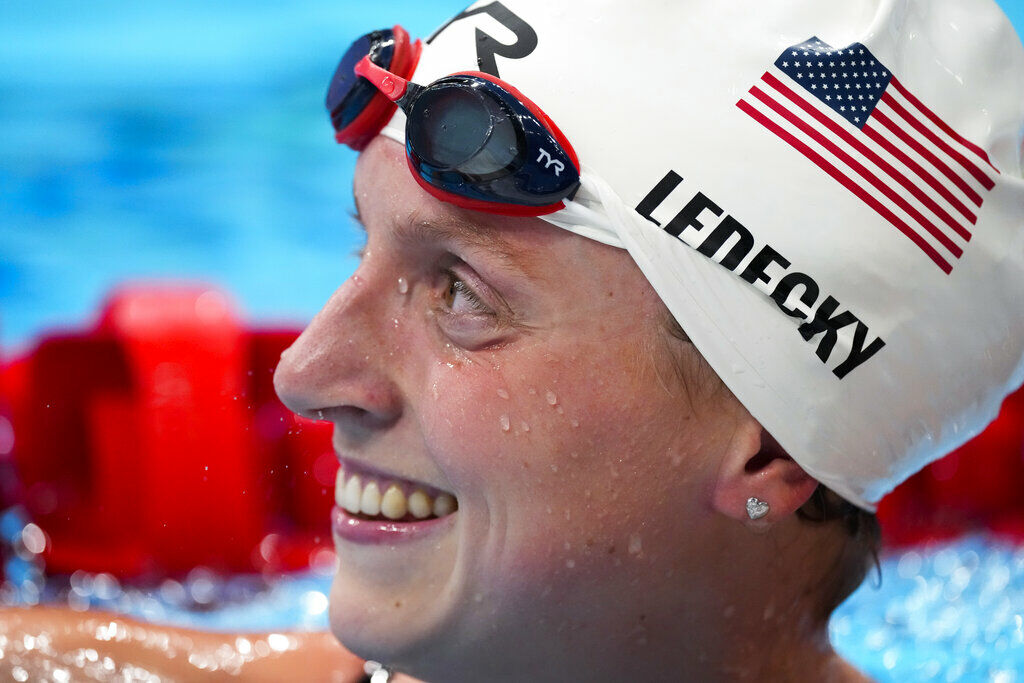 Notable facts: Ledecky was a teenage phenom on WTOP’s radar before she became the face of United States swimming. In Ledecky’s 2012 Olympic profile, Yuri Suguiyama, her coach at the Curl-Burke Swim Club, wasn’t surprised she made it to the Summer Games at age 15.

“I think Katie possesses a lot qualities that make her a successful swimmer, but it’s really the qualities … you can’t see,” he said. “She’s got a tremendous drive about her. She’s incredibly self-motivated. She’s a very hard worker and she’s very competitive, as well.”

Since then, Ledecky collected five gold medals and one silver across two Olympic appearances. Now, she’s one of the biggest Olympic stars in the world and a favorite to earn multiple medals again. 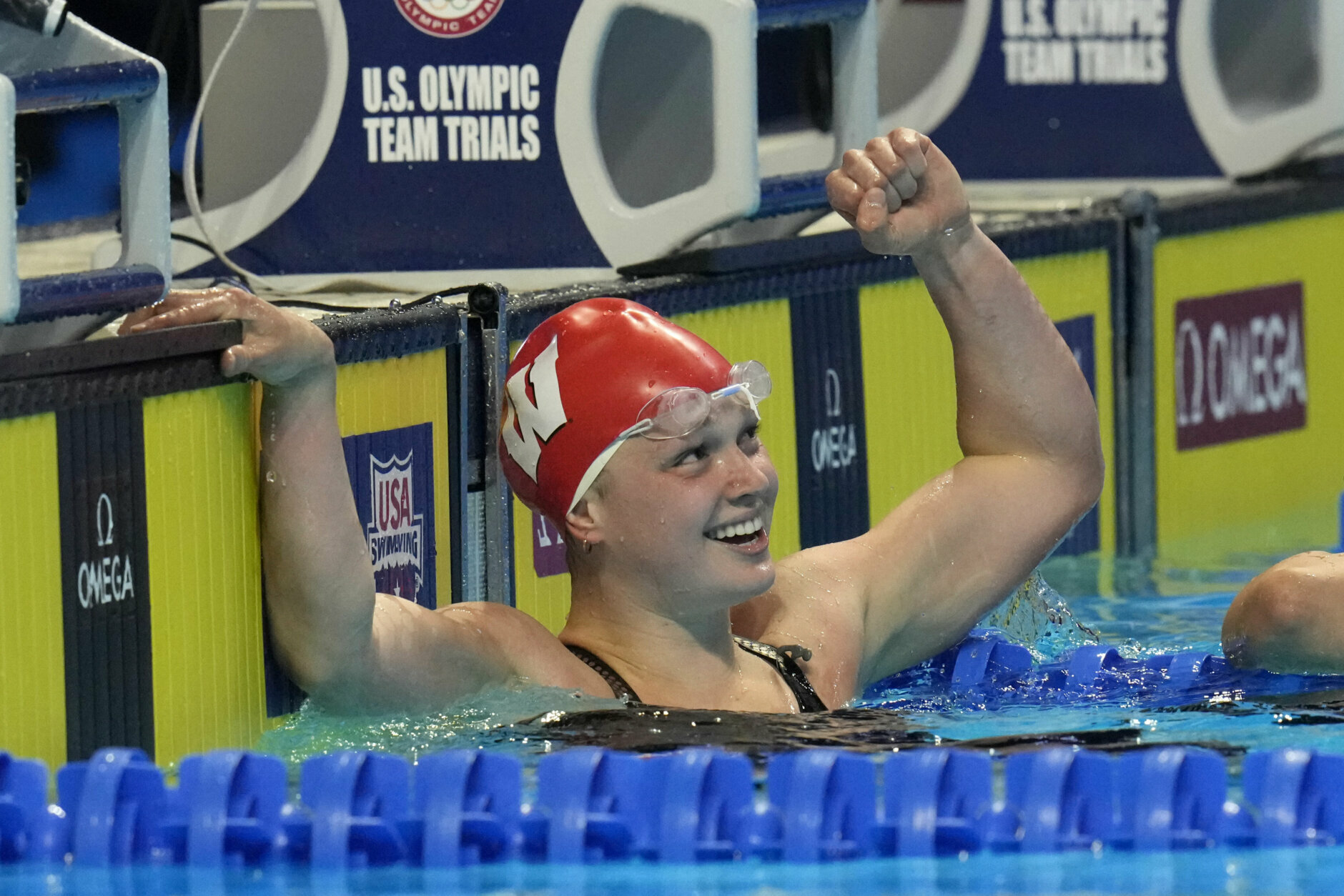 Notable facts: Bacon, 18, has quite a bit in common with her swimming mentor and fellow Olympian Katie Ledecky — both graduated from Stone Ridge School of the Sacred Heart, and now both can say they were teenage Olympians. Bacon’s second-place finish in the 200 meter backstroke earned her a spot in her first Summer Games, and again like Ledecky, it’s probably the beginning of a long, successful Olympic career. 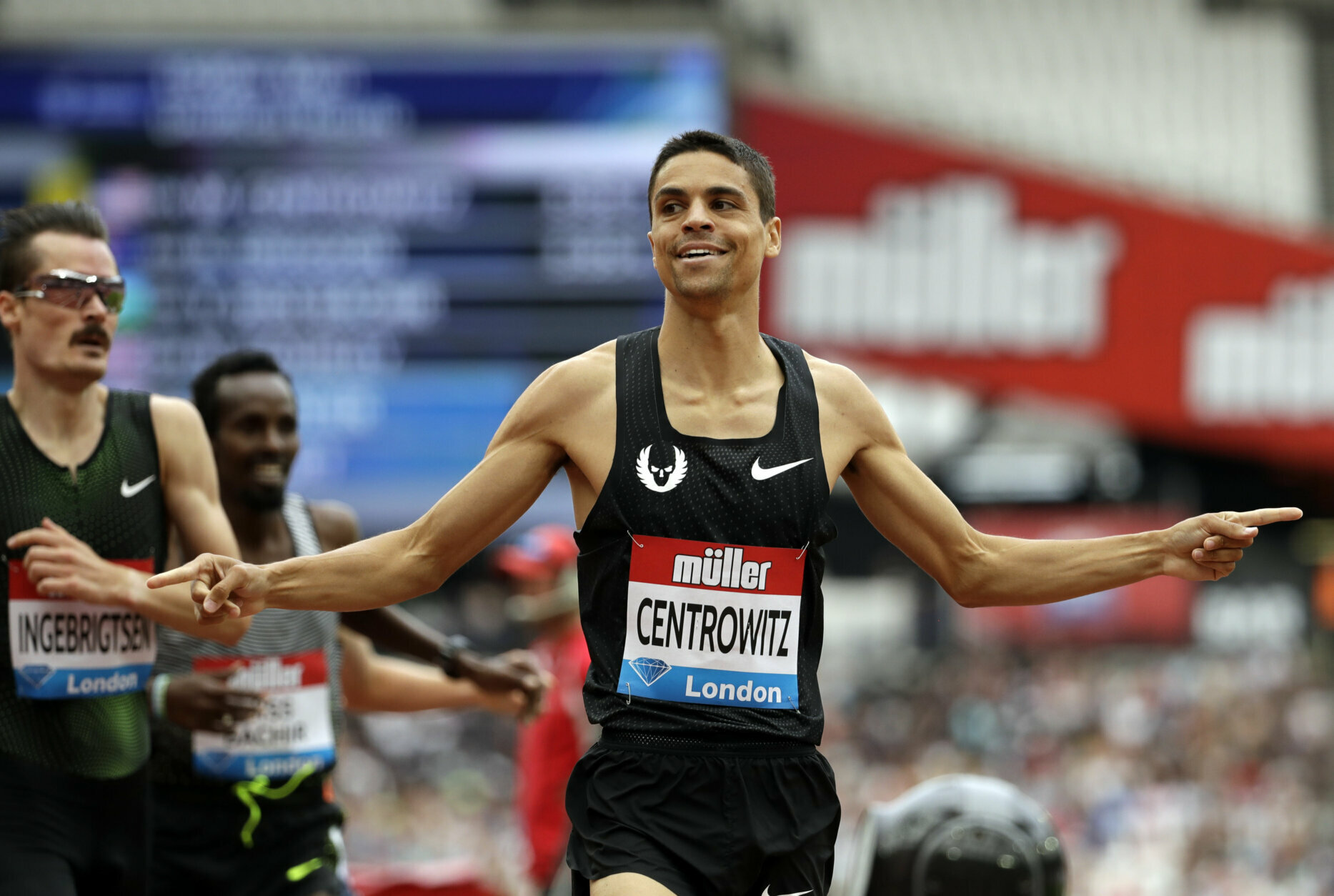 Notable facts: Centrowitz, who was profiled by WTOP in 2016, is making his third trip to the Summer Games and is a second-generation Olympian (his father is two-time Olympian Matt Centrowitz Sr.).

The younger Centrowitz took home a gold medal in the 1,500 meters in Rio five years ago, the first American to do so since 1908. He also came a fraction of a second from a medal in the same race in London in 2012. 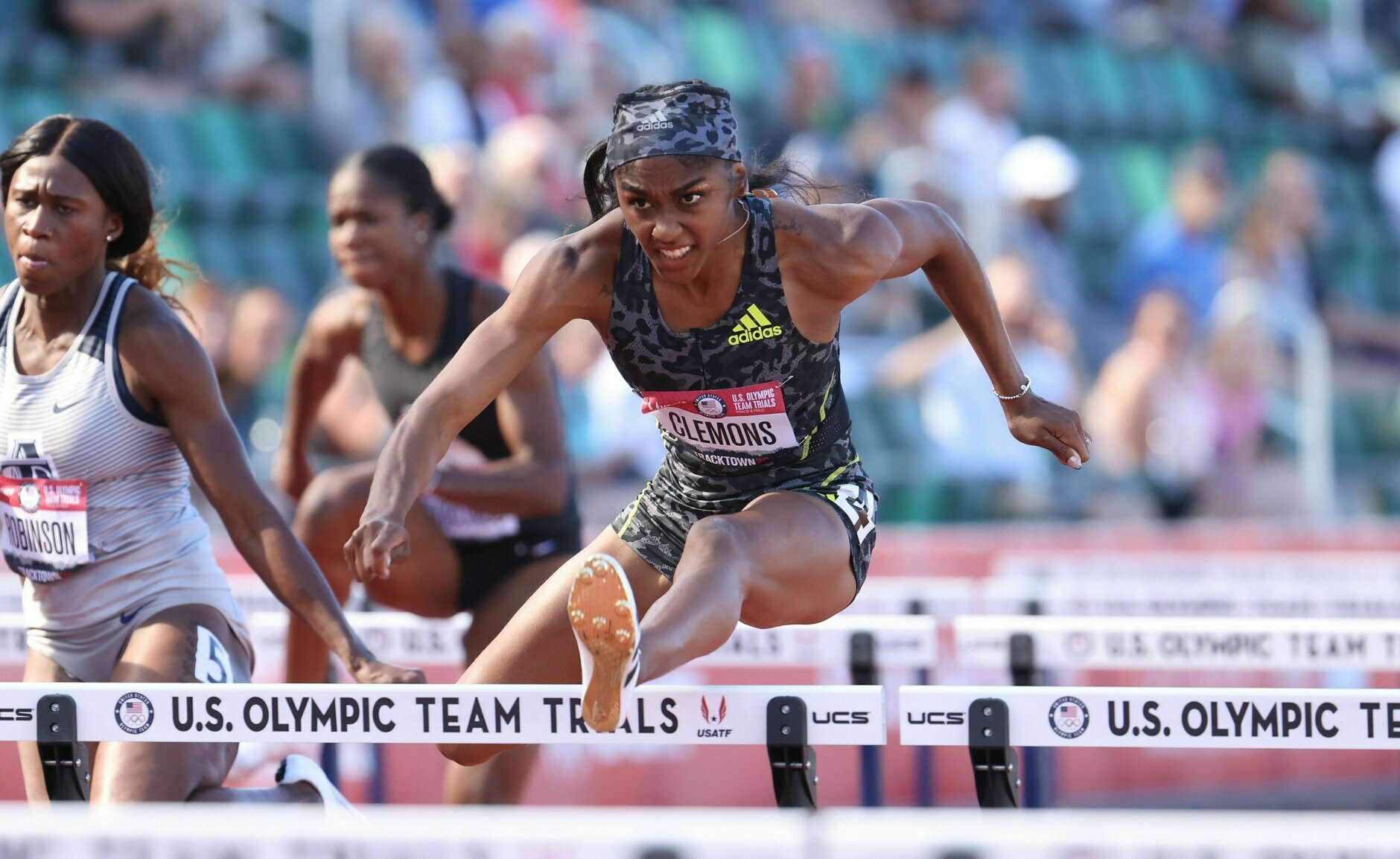 Notable facts: The Westlake High School grad went on to have a record-setting collegiate career at Ohio State, where she won two NCAA championships and 10 Big Ten conference championships. Now, after overcoming several obstacles, she’s headed to Tokyo for her first Olympics. Oh, by the way … her husband, Kyle Clemons, brought home gold from the Summer Games in Rio, winning the 4×400 meter relay.

Notable facts: Collins has three silver medals and one bronze in international competition. The Princeton grad is a three-time All-American and four-time All-Ivy recipient. 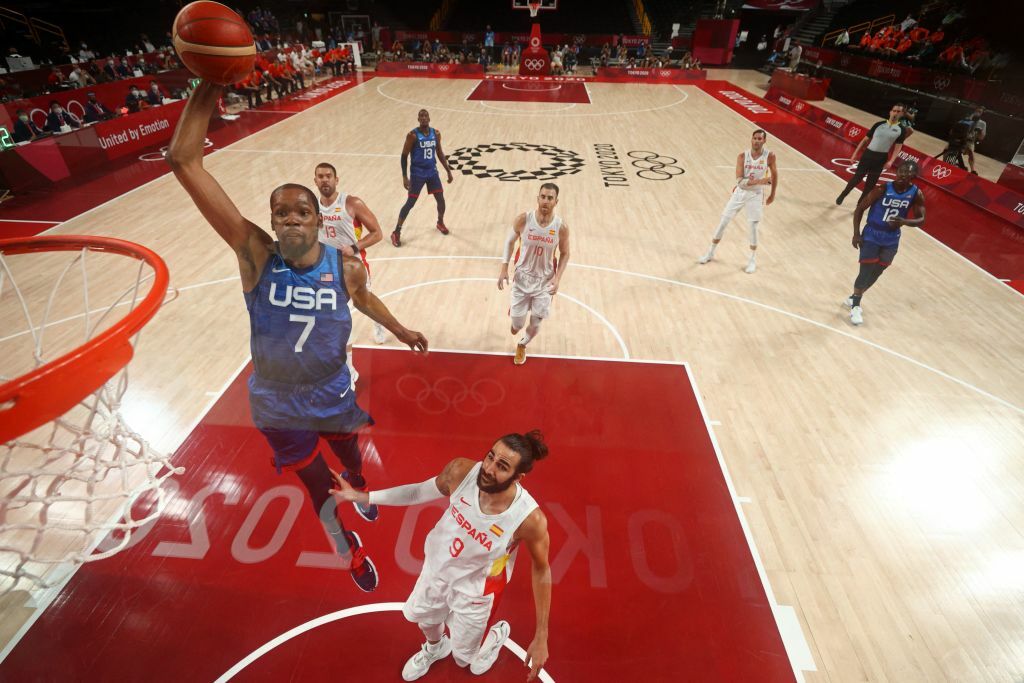 6/23
Kevin Durant #7 of the 2021 USA Basketball Men’s National Team dunks during a practice at the Mendenhall Center at UNLV as the team gets ready for the Tokyo Olympics on July 6, 2021 in Las Vegas, Nevada. (Photo by Ethan Miller/Getty Images)

Notable facts: Does he really need introduction? Durant is perhaps the biggest basketball star to come out of the D.C. area since Elgin Baylor. Durant — an 11-time All-Star, four-time scoring champion and two-time NBA Finals MVP, just to name a few honors — is playing in his third Olympics and has yet to lose a game in international competition. 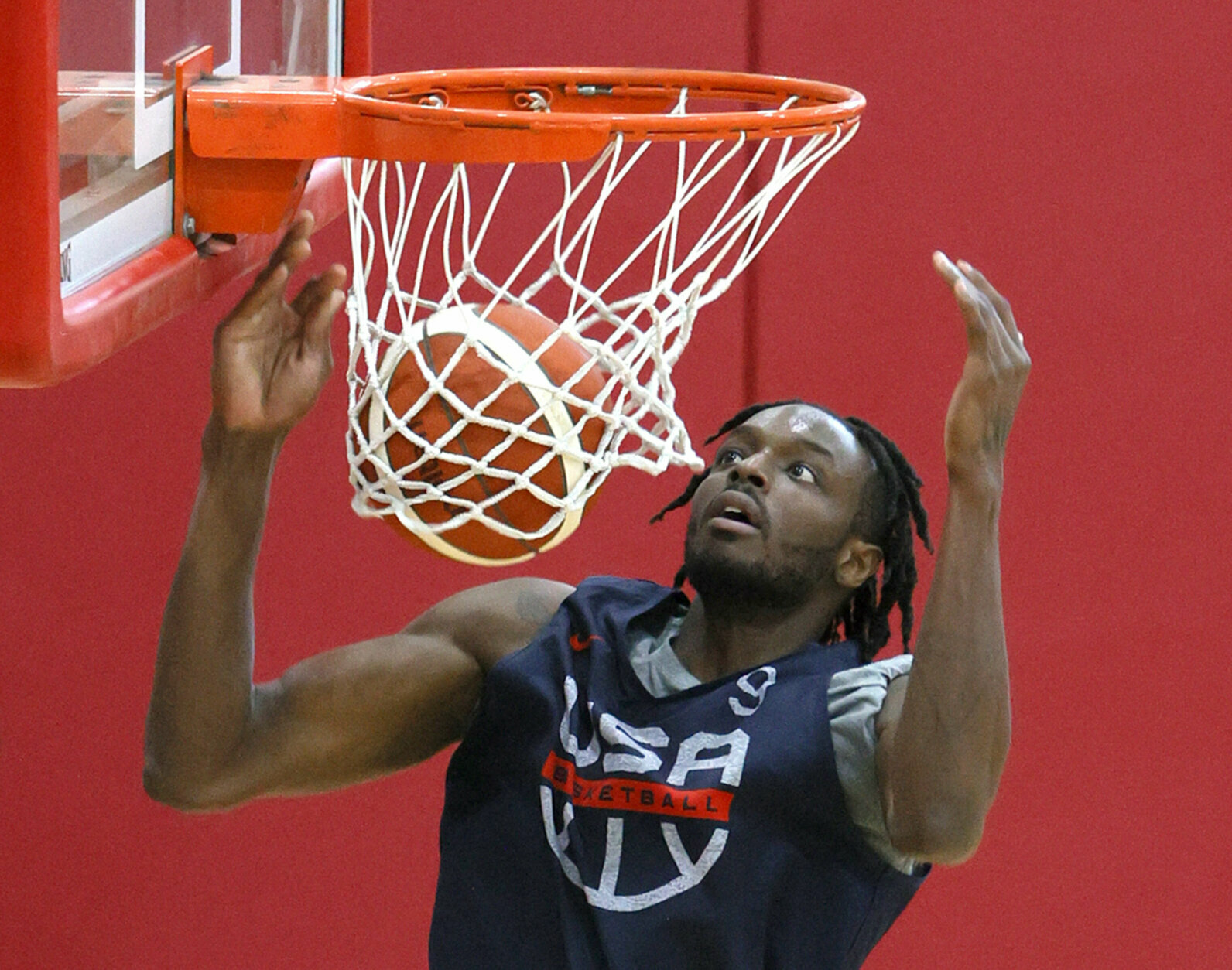 7/23
Lerami Grant #9 of the 2021 USA Basketball Men’s National Team dunks as he practices at the Mendenhall Center at UNLV as the team gets ready for the Tokyo Olympics on July 6, 2021 in Las Vegas, Nevada. (Photo by Ethan Miller/Getty Images)

Notable facts: The former four-star recruit from sports powerhouse DeMatha Catholic High School went on to star at Syracuse and was drafted in the second round of the 2014 NBA draft. Grant, who is playing for his fourth NBA team, is the son of former Bullets forward Harvey Grant. 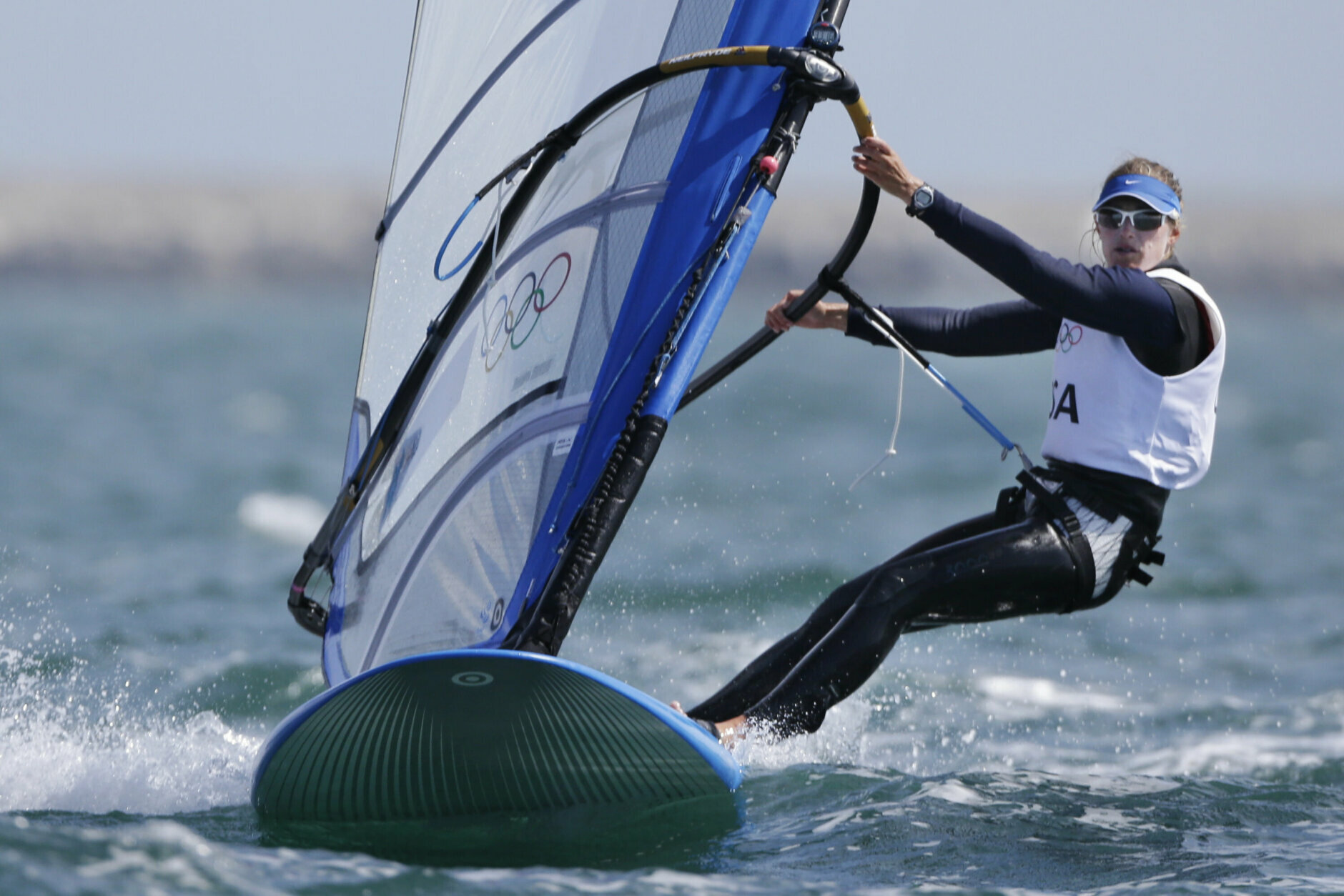 Notable facts: Hall is competing in her second Olympics after a disappointing finish in 2012, but told WTOP that this time around, “I’m really, really happy with how I’m sailing right now and I really don’t think I’ve sailed better than right now.”

Hall, who found windsurfing as a youth along the Magothy River in Cape St. Claire, is confident in a good result in Tokyo because she’s refined her technique in the nine years since the London Olympics and “I’m an experienced athlete now. I was more on the rookie side in 2012.”

9/23
Eric Harrison Jr. (Waldorf, Maryland) — Track and Field
Notable facts: Harrison was born in the United States and starred at Ohio State but will run for Trinidad and Tobago in the Summer Games. The communications major racked up several Big Ten honors over the course of his collegiate career and will now represent his mother’s home country in his first Olympics.
Competition: Men’s 4 x 100 relay team — Aug. 6 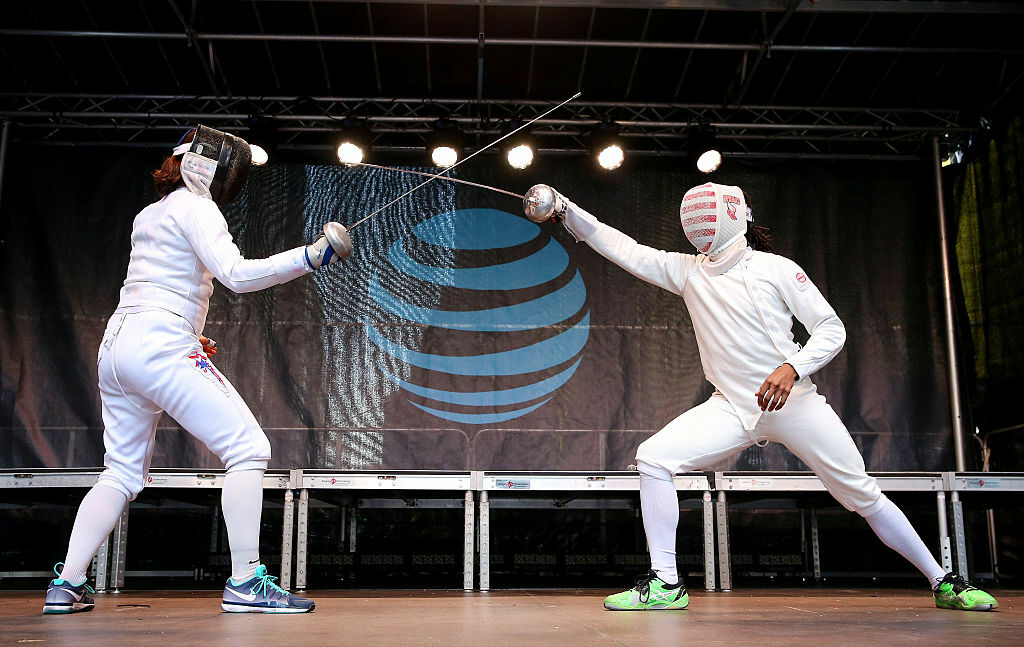 10/23
Jason Pryor and Kat Holmes take part in a fencing demonstration during Team USA’s Road to Rio Tour presented by Liberty Mutual on April 27, 2016 in New York City. The event marks 100 days until the Opening Ceremony of the Rio 2016 Olympic Games. (Photo by Ed Mulholland/Getty Images for USOC)

Notable facts: Holmes was profiled by WTOP before competing in the 2016 Olympics, where she placed fifth with the U.S. Women’s Epee Team and 25th individually at the Summer Games in Rio. Holmes made history in 2018 by anchoring Team USA to a gold medal, the first U.S. Women’s Epee Team to medal at the Senior World Championships. 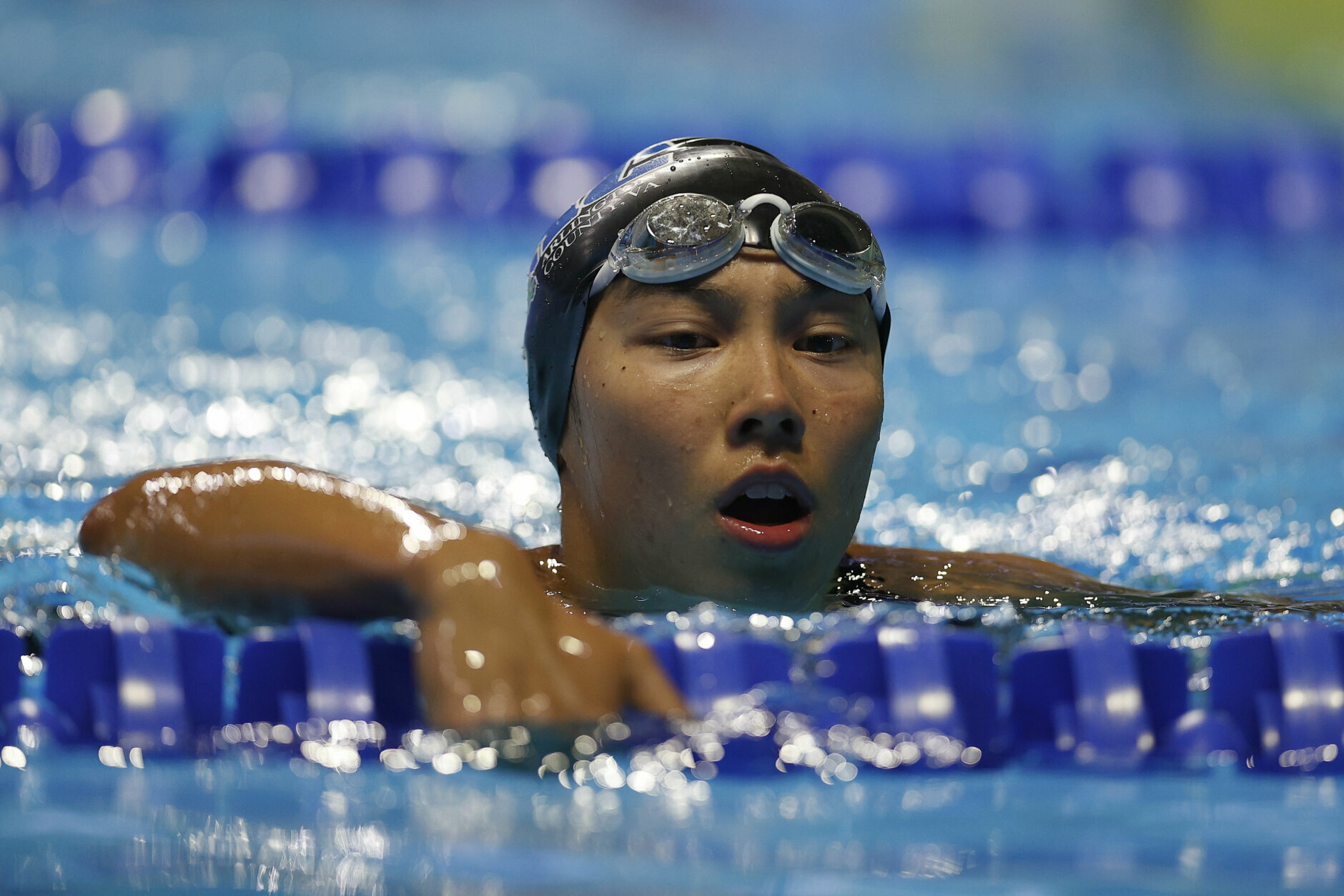 11/23
Torri Huske of the United States competes in a semifinal heat for the Women’s 100m freestyle during Day Five of the 2021 U.S. Olympic Team Swimming Trials at CHI Health Center on June 17, 2021 in Omaha, Nebraska. (Photo by Maddie Meyer/Getty Images)

Notable facts: Huske could be the latest in a long line of D.C.-area swimming greats. The 18-year-old Yorktown High School grad is fresh off setting the American women’s record for 100-meter butterfly — twice. She’s also the first freshman swimmer, male or female, to be awarded The Washington Post All-Met Swimmer of the Year. 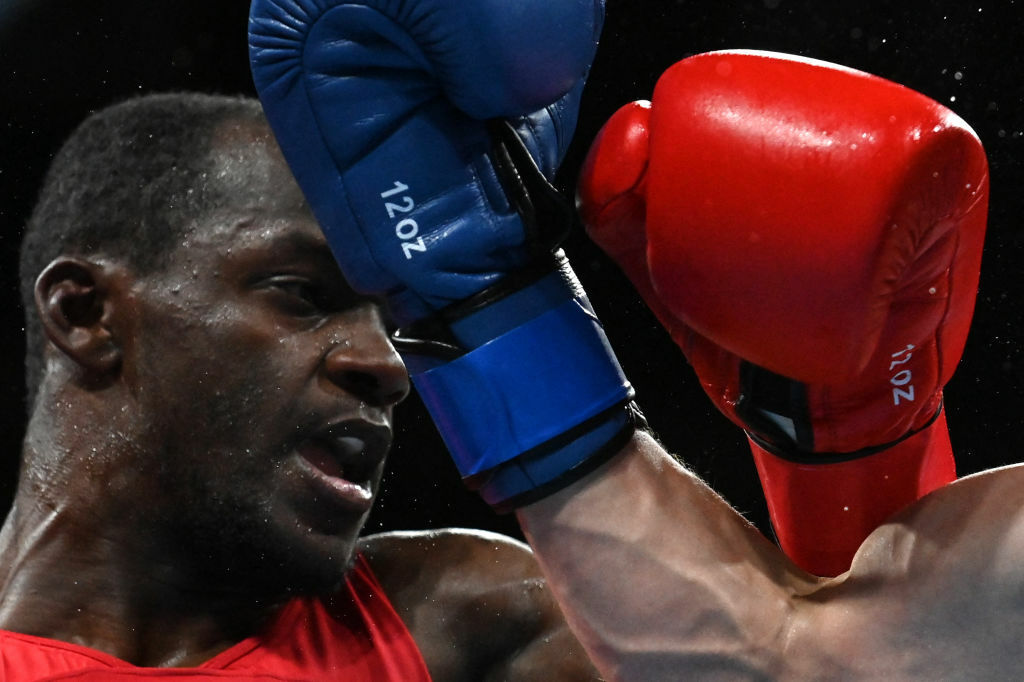 Notable facts: Isley seeks to become the first middleweight boxer to win gold for the United States since 2004. The Alexandria City High School (formerly T.C. Williams High School) graduate enters his first Summer Games with bronze medals in the 2019 Pan Am Games and the 2017 World Championships.

Results: Isley lost to Russian Gleb Bakshi via split decision in the Round of 16.

Notable facts: The 23-year-old Sidwell Friends graduate won gold at the 2021 World Triathlon Championship Series to become the youngest woman to ever qualify for the U.S. Olympic Triathlon Team. In addition to triathlons, Knibb was on her high school cross-country team and swam for Nation’s Capital Swim Club. 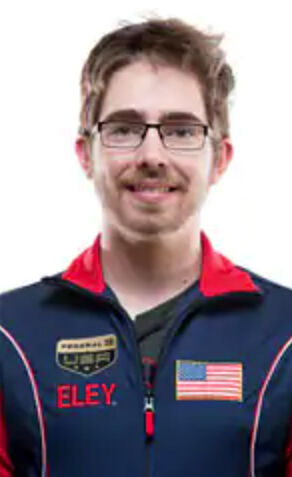 Notable facts: Kozeniesky is a 2013 graduate of Robinson Secondary in Fairfax, where he led the Rams rifle team to a 2012 national championship. 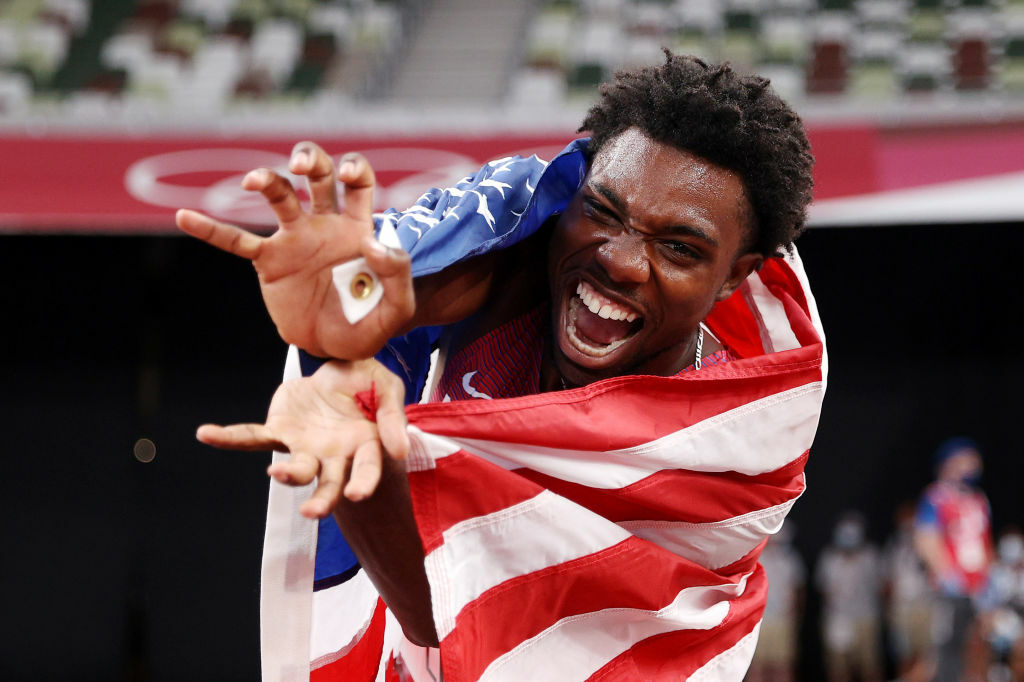 15/23
Noah Lyles of Team United States celebrates after winning the bronze medal in the Men’s 200m Final on day twelve of the Tokyo 2020 Olympic Games at Olympic Stadium on August 04, 2021 in Tokyo, Japan. (Photo by Patrick Smith/Getty Images)

Notable facts: The Alexandria City High School (formerly T.C. Williams High School) graduate fell short of the 2016 Olympics but won a pair of gold medals in the Under 20 Championships that year. Lyles also brought home gold in the 2019 World Athletic Championships, in both the 200- meter event and the 4×100 relay. His varied interests off the track make him a potential star in the making.

Keep an eye out for his younger brother, Josephus, as well — he’s an award-winning sprinter in his own right. 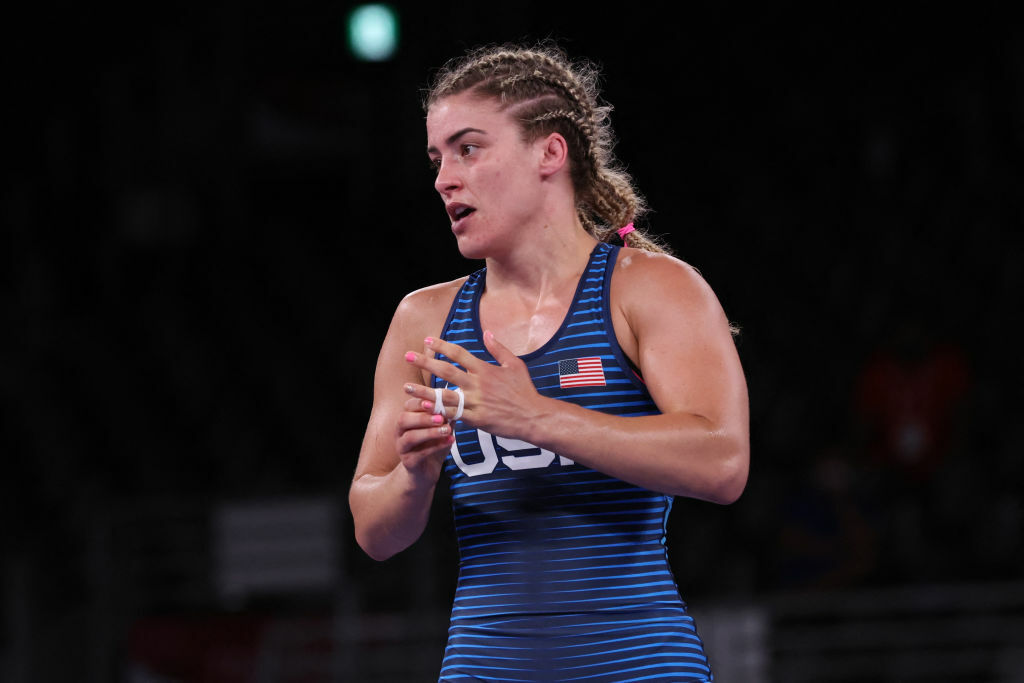 16/23
USA’s Helen Louise Maroulis reacts after being defeated by Japan’s Risako Kawai in their women’s freestyle 57kg wrestling semi-final match during the Tokyo 2020 Olympic Games at the Makuhari Messe in Tokyo on August 4, 2021. (Photo by Jack GUEZ / AFP) (Photo by JACK GUEZ/AFP via Getty Images)

Notable facts: In 2016, Maroulis became the first U.S. woman to win an Olympic wrestling gold medal, beating Saori Yoshida — a three-time gold medalist for Japan and a 13-time world champion considered the most dominant wrestler of all-time. Now, the 29-year-old is attempting another storybook Olympic moment; her wrestling career was derailed by a 2018 concussion severe enough to prompt Maroulis to consider retirement. 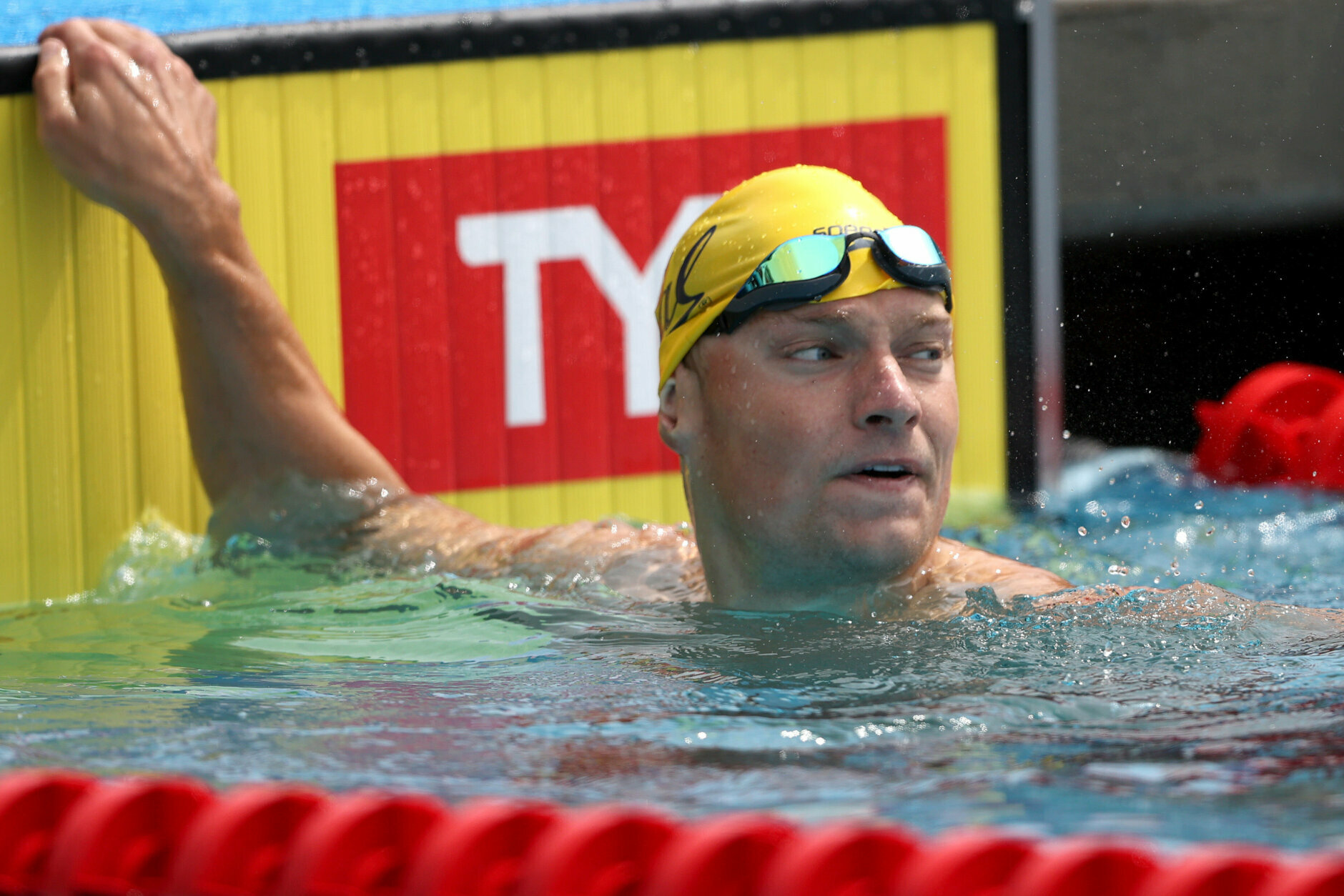 Notable facts: At age 24, Seliskar heads to his first Olympics as a highly decorated swimmer, earning 2019 NCAA Male Swimmer of the Year honors after a year in which he won an NCAA title in the 200 freestyle as a senior at the University of California, one of his four championships for the Golden Bears. Seliskar, a Thomas Jefferson High School graduate, earned his spot in Tokyo with his fourth-place finish in 200-meter freestyle at the Olympic Trials. 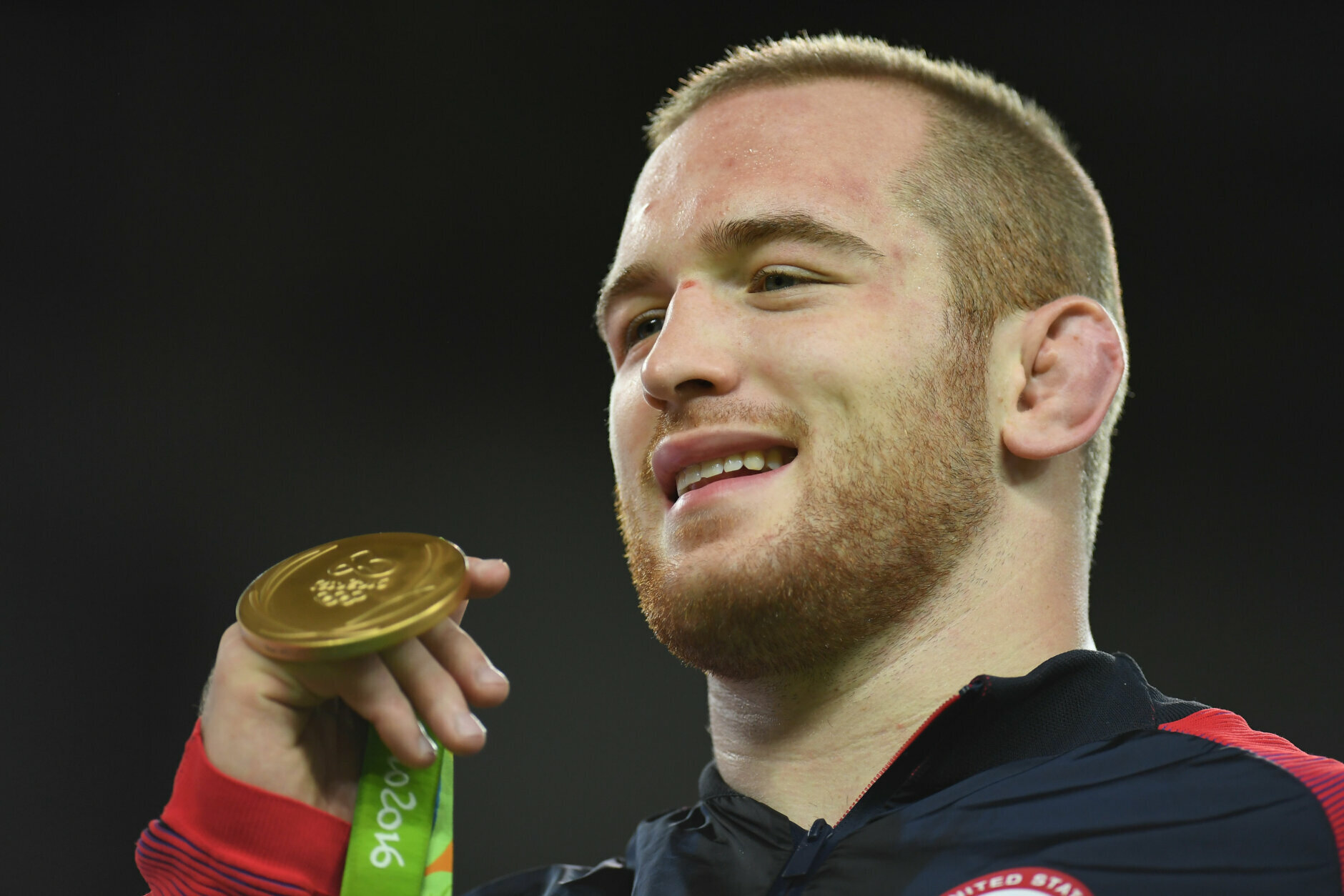 18/23
Gold medalist Kyle Frederick Snyder of the United States stands on the podium during the medal ceremony for the Men’s Freestyle 97kg on Day 16 of the Rio 2016 Olympic Games at Carioca Arena 2 on Aug. 21, 2016 in Rio de Janeiro, Brazil. (Photo by Laurence Griffiths/Getty Images)

Notable facts: The man known as “Captain America” has a wrestling resume that reads a lot like the fictional super soldier. After going undefeated in 179 high school matches at Our Lady of Good Counsel, Snyder went on to earn a gold medal in the 2016 Summer Games in Rio, becoming the youngest wrestler to win the NCAA, World and Olympic titles in the same year. He’s also the first Olympic gold medalist to return to college to win an NCAA title, earning two more championships at Ohio State. (Click here to read more about Snyder.) 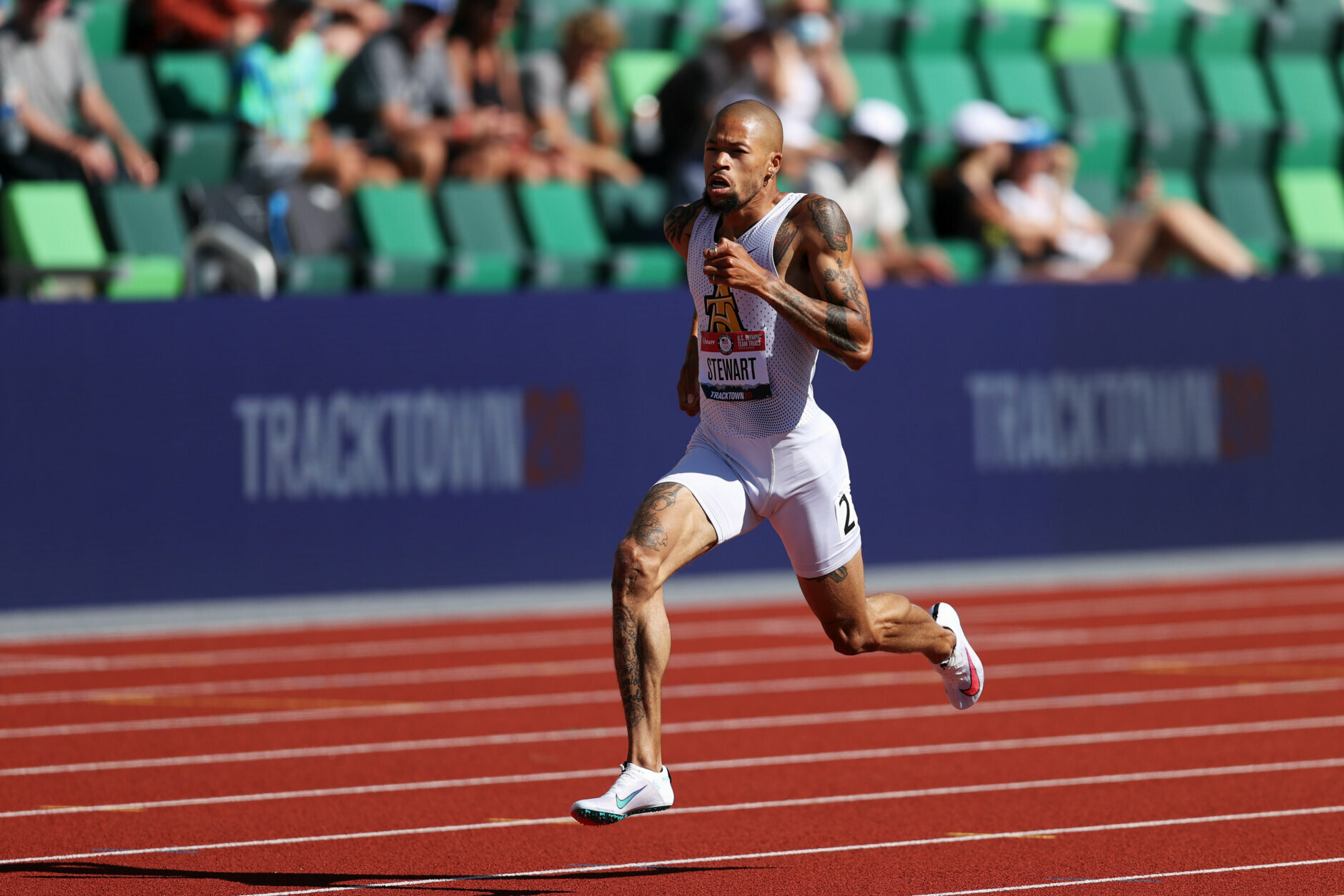 Notable facts: Stewart, a South County High School graduate, is headed to his first Olympics after finishing fourth in the 400-meter event at the Olympic Team Trials. He also runs the 400 for North Carolina A&T — an HBCU in Greensboro, North Carolina — where he finished second in the 2019 NCAA Championships and fourth in the 2021 NCAA Championships. 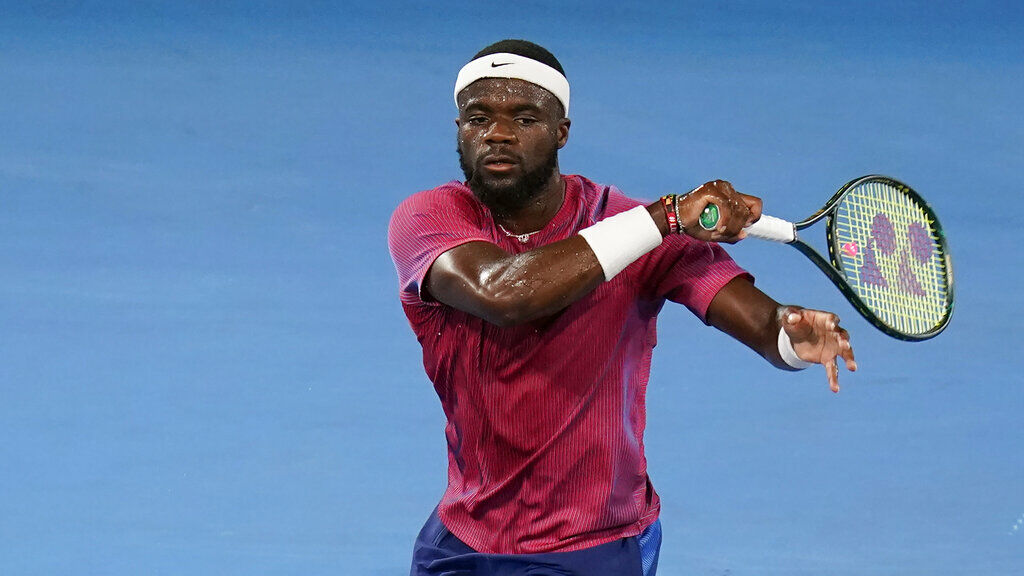 20/23
Frances Tiafoe, of the United States, plays Stefanos Tsitsipas, of Greece, during the second round of the tennis competition at the 2020 Summer Olympics, Tuesday, July 27, 2021, in Tokyo, Japan. (AP Photo/Seth Wenig)

Notable facts: Tiafoe, 23, is considered a tennis prodigy; he only turned pro six years ago yet he’s currently ranked fifth in the United States and 53rd in the world, topping out at a 29th world ranking in 2019 — the year he made a run to the Australian Open quarterfinals. A 17-year-old Tiafoe was the youngest American in the main French Open draw since Michael Chang in 1989. 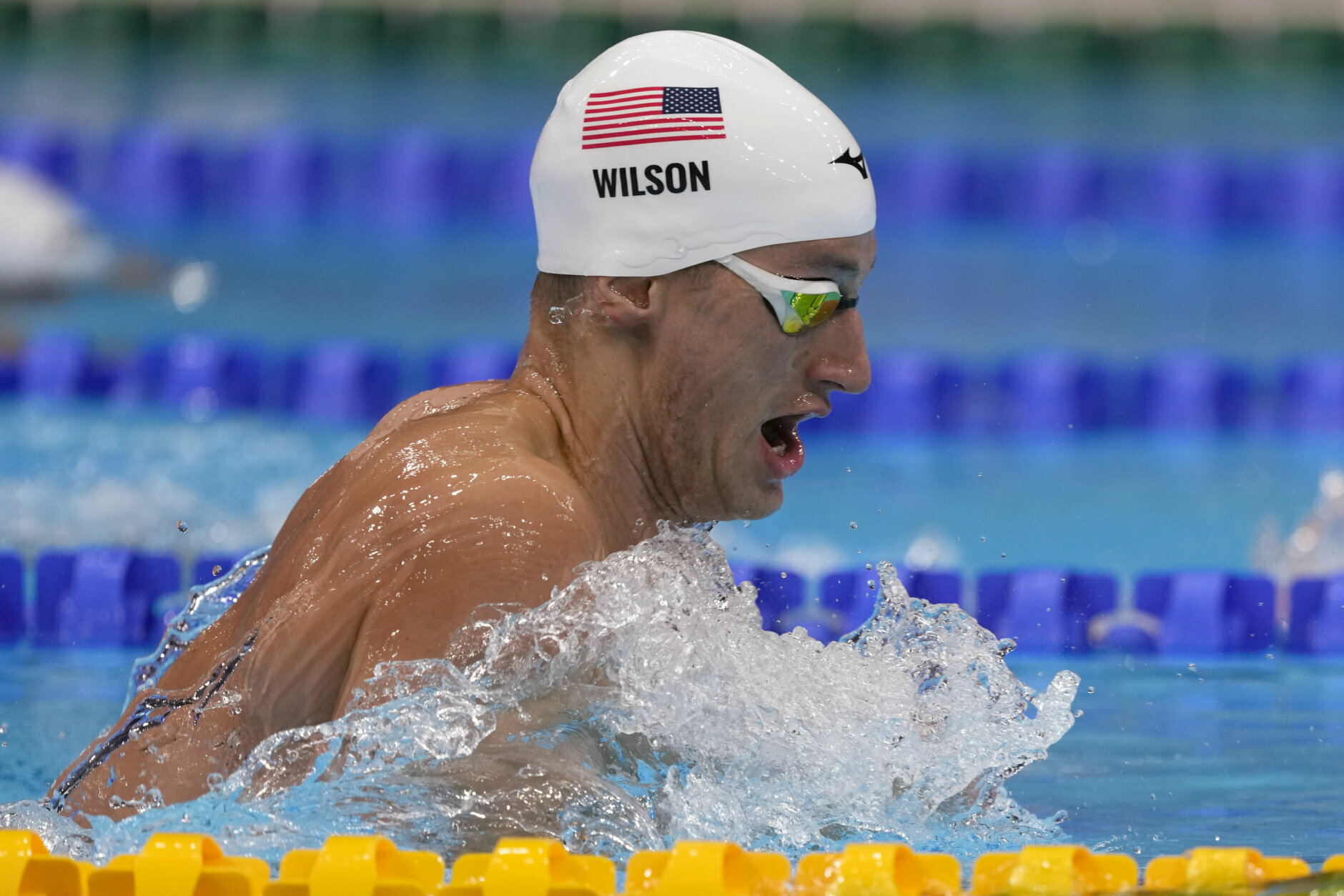 Notable facts: Not to be confused with the older brother of actors Luke and Owen Wilson, this Andrew Wilson made a name for himself at the U.S. Olympic trials with his historic second-place finish in the 100-meter breaststroke. The Emory University graduate is believed to be the first former Division III swimmer to earn a spot on the U.S. Olympic swim team. 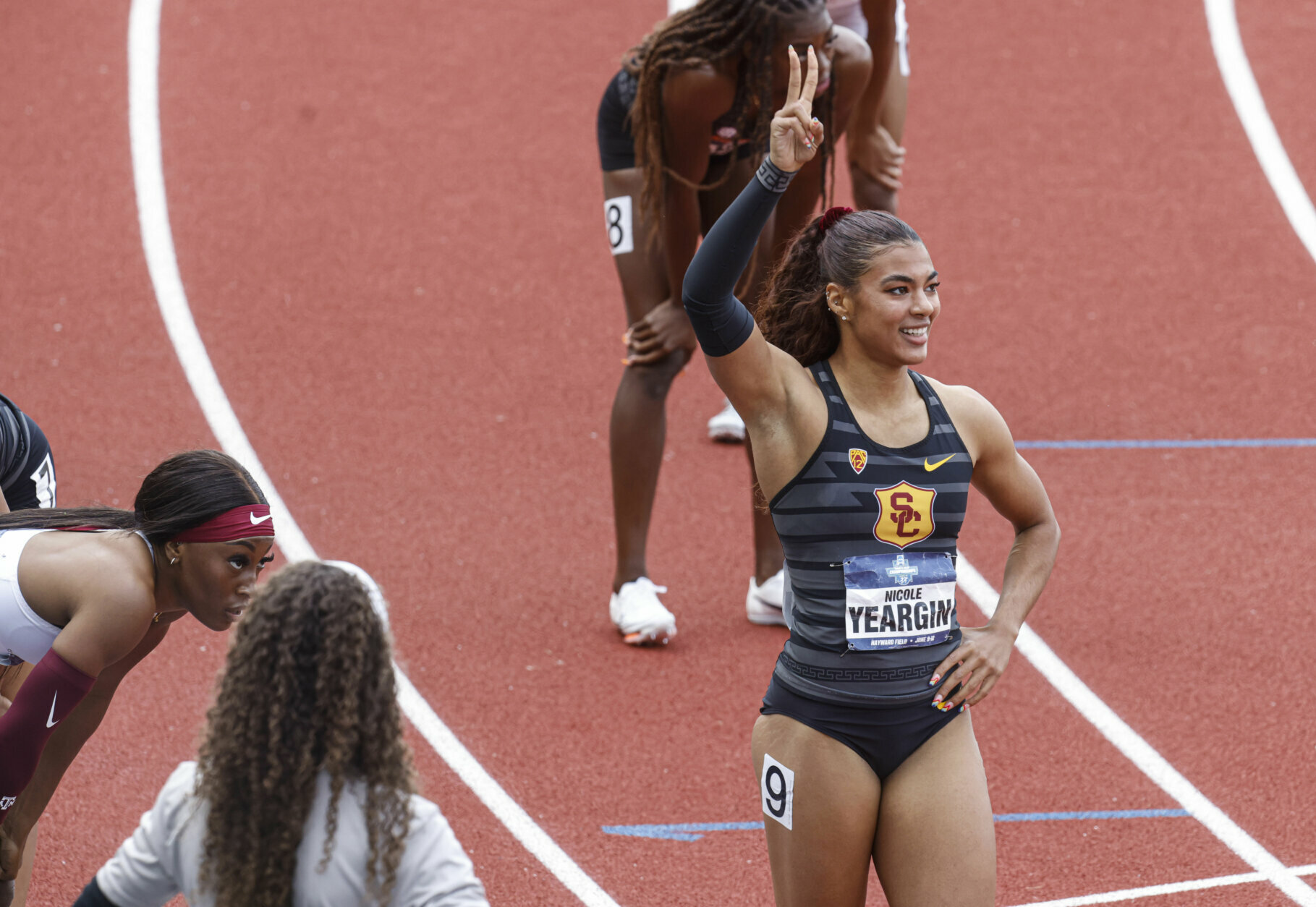 Notable facts: Yeargin, a graduate of Bishop McNamara High School, will run for Great Britain (her mother is Scottish) in the 2020 Olympics. She qualified with a personal best 50.96 in the 400 m and is one of 15 track and field athletes from USC to compete in the Summer Games in Tokyo. 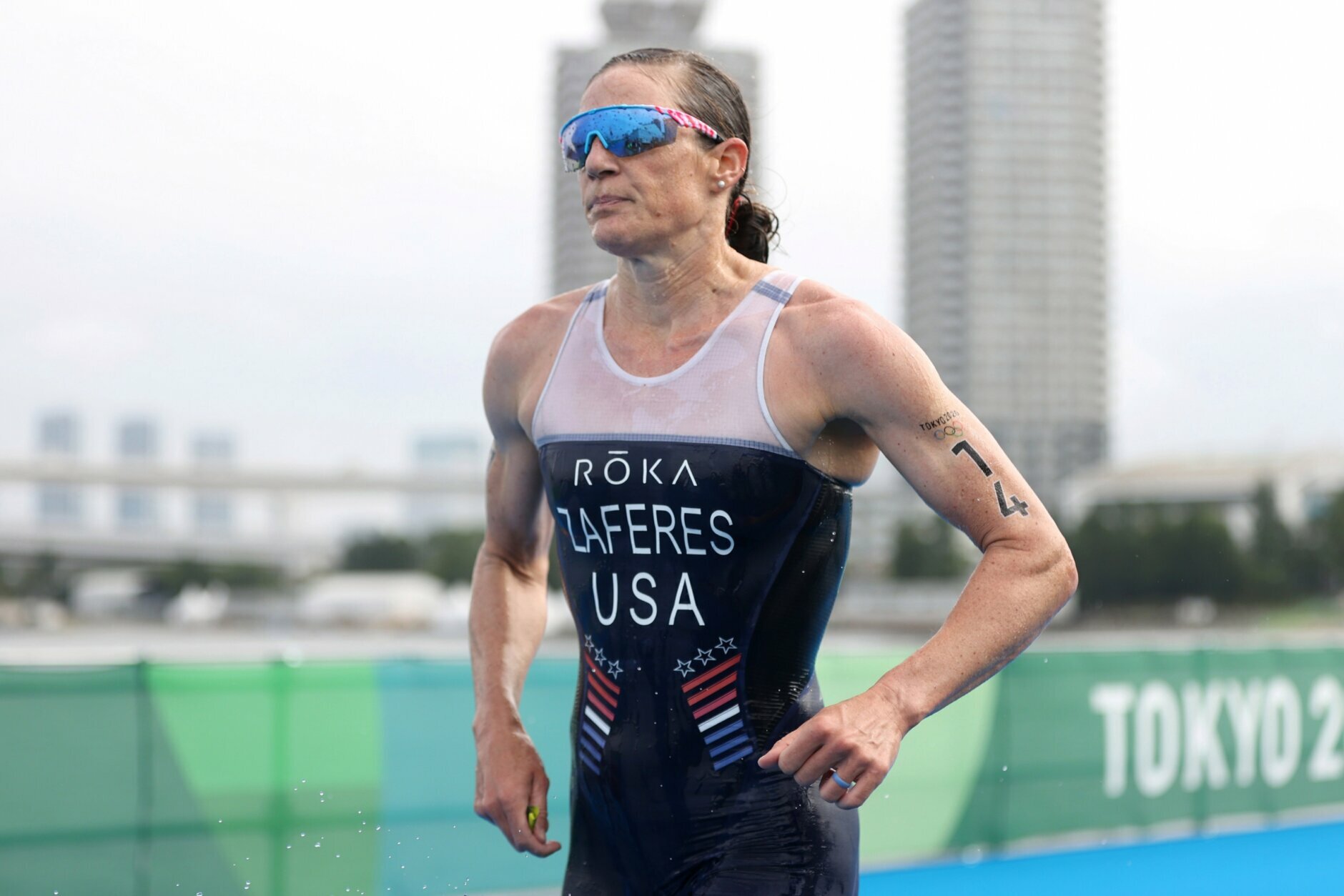 23/23
Katie Zaferes placed third in the women’s triathlon to claim the bronze medal Monday night, posting a time of 1:57:03 in the rainy finish.

Result: Zaferes placed third in the women’s triathlon to claim the bronze medal, posting a time of 1:57:03. 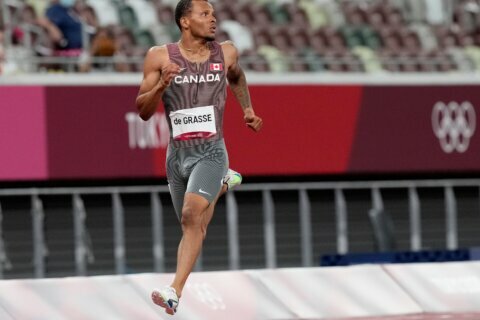 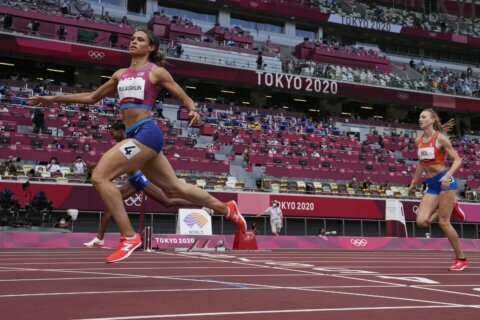