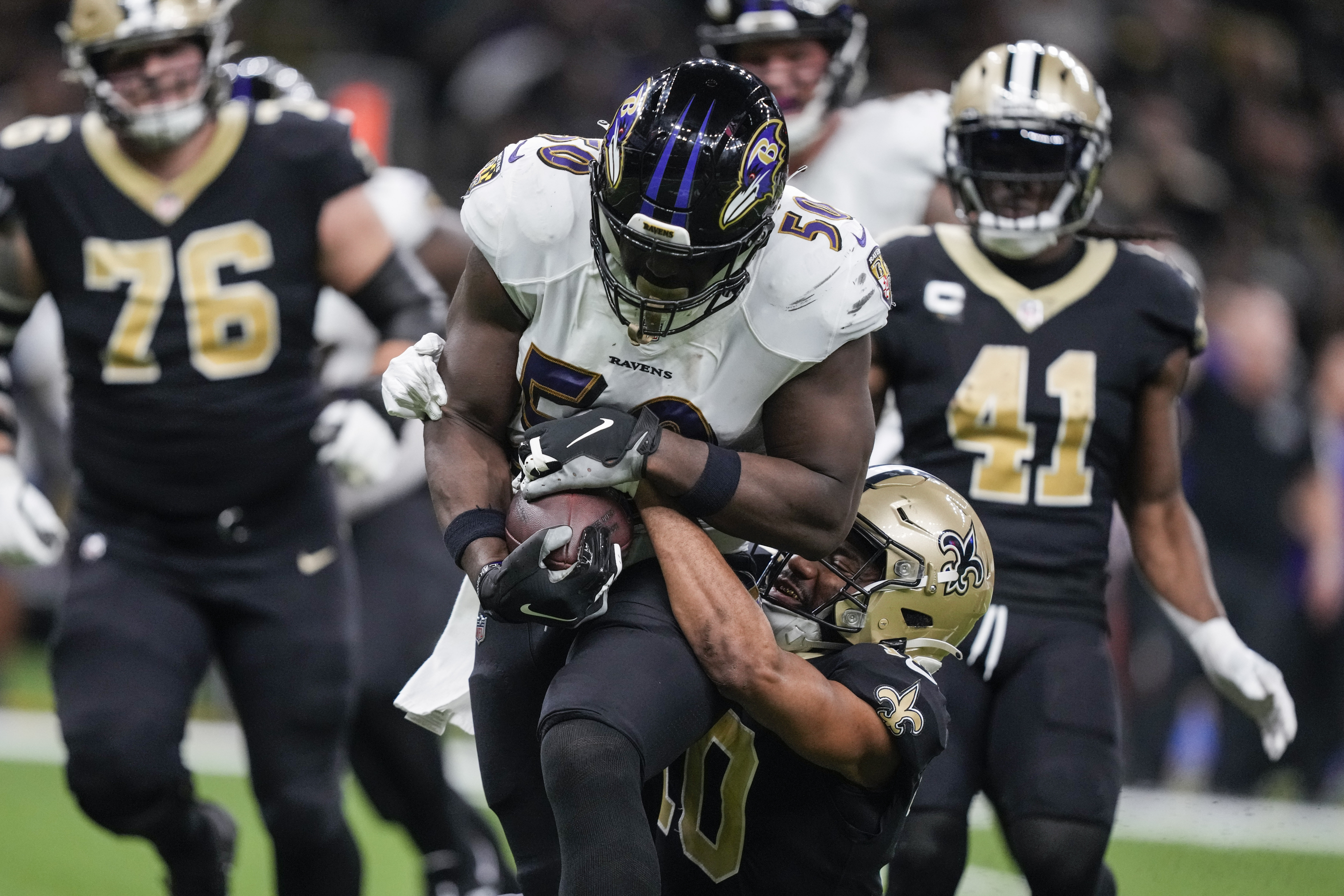 1/13
Baltimore Ravens linebacker Justin Houston (50) runs with his interception as he is tackled by New Orleans Saints wide receiver Tre’Quan Smith (10) in the second half of an NFL football game in New Orleans, Monday, Nov. 7, 2022. (AP Photo/Gerald Herbert)

Lamar Jackson’s 100th career touchdown pass upped his Monday Night Football ledger to 13 touchdowns and no interceptions in five games. However, the Ravens’ first game of the season outscoring the opposition in the fourth quarter was thanks to the defense. If Roquan Smith’s presence opens things up for even old man Justin Houston to go off for 2.5 sacks and a pick, just wait till David Ojabo gets in the mix.

The Ravens are gonna be scary good coming out of their bye week. 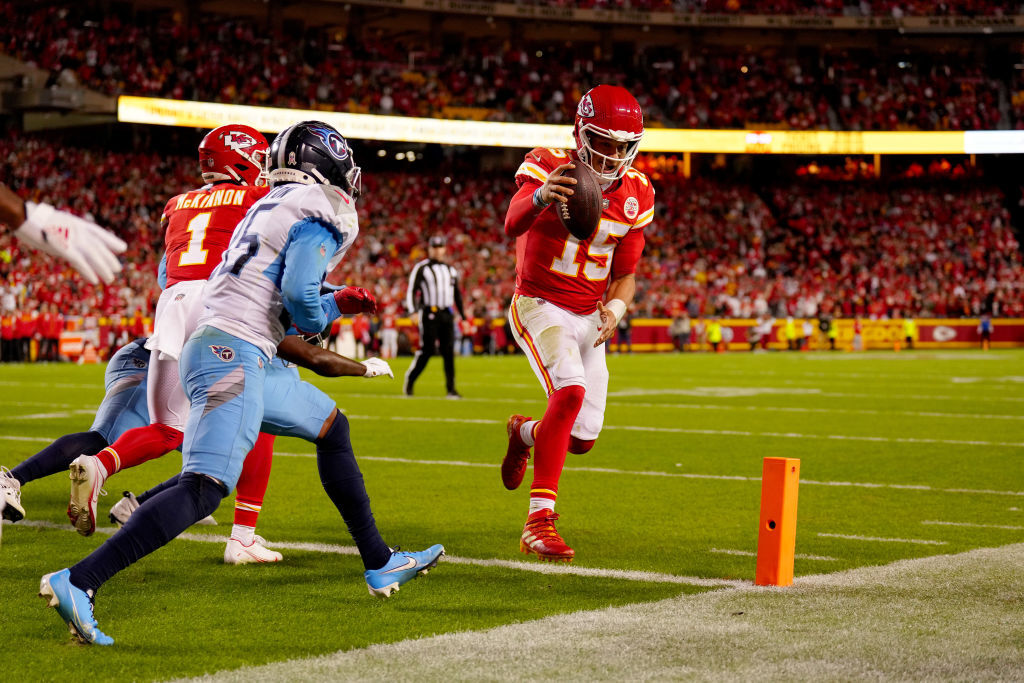 2/13
KANSAS CITY, MISSOURI – NOVEMBER 06: Patrick Mahomes #15 of the Kansas City Chiefs runs in for a two-point conversion to tie their game against the Tennessee Titans in the fourth quarter at Arrowhead Stadium on November 06, 2022 in Kansas City, Missouri. (Photo by Jason Hanna/Getty Images)

Has anyone had a more quiet MVP season than Patrick Mahomes?

Since Tyreek Hill took his talents to South Beach, Mahomes is keeping Kansas City atop the AFC West by shouldering the offensive load. Like, damn near all of it. Give this man his trophy now. 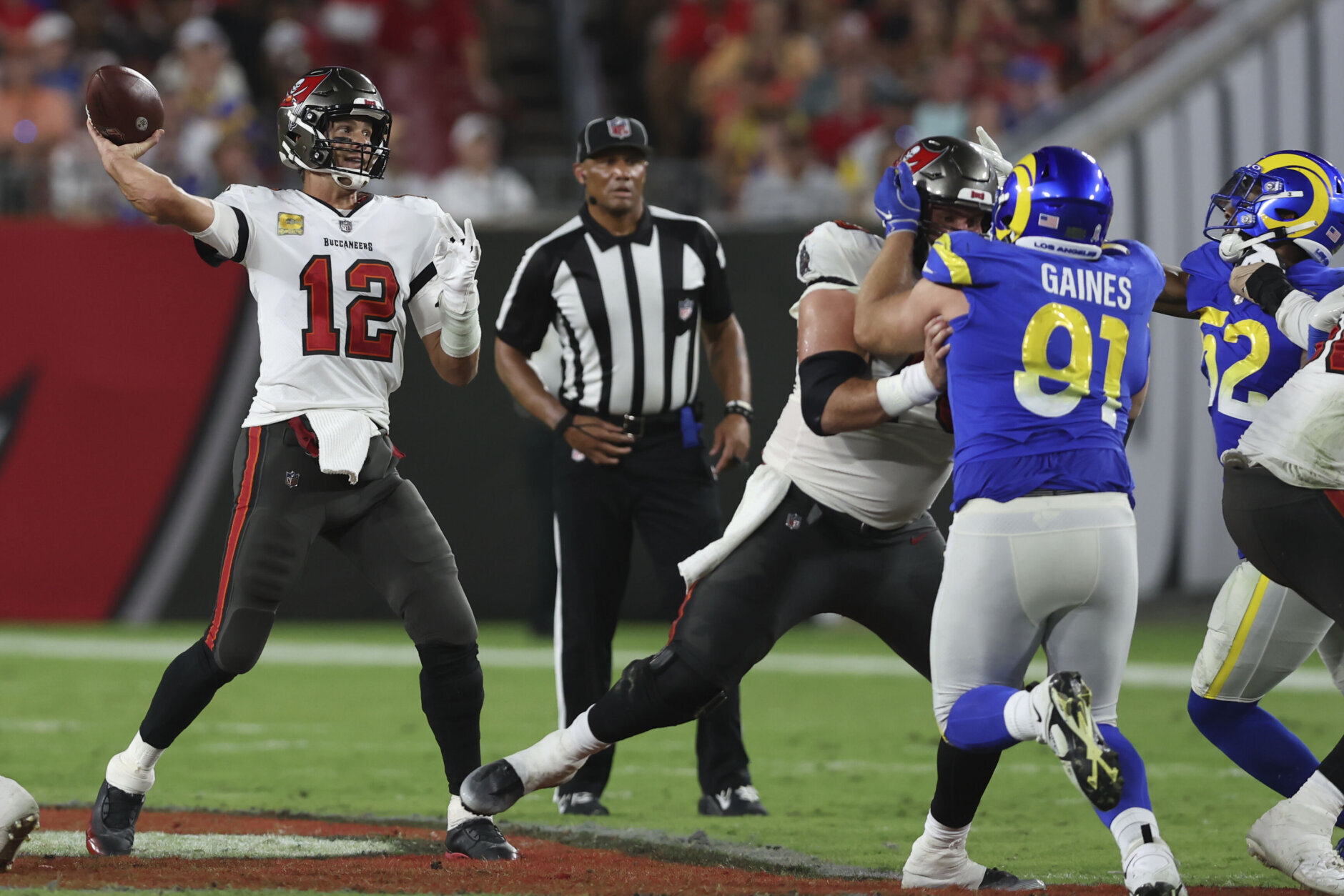 3/13
Tampa Bay Buccaneers quarterback Tom Brady (12) throws a pass during the second half of an NFL football game between the Los Angeles Rams and Tampa Bay Buccaneers, Sunday, Nov. 6, 2022, in Tampa, Fla. Brady become the first player in NFL history with 100,000 career passing yards on his next pass reception. (AP Photo/Mark LoMoglio)

The Rams’ first loss to Brady’s Bucs dropped them to 3-5 may be the beginning of the end of their season. I thought the Super Bowl loser was supposed to have the hangover? 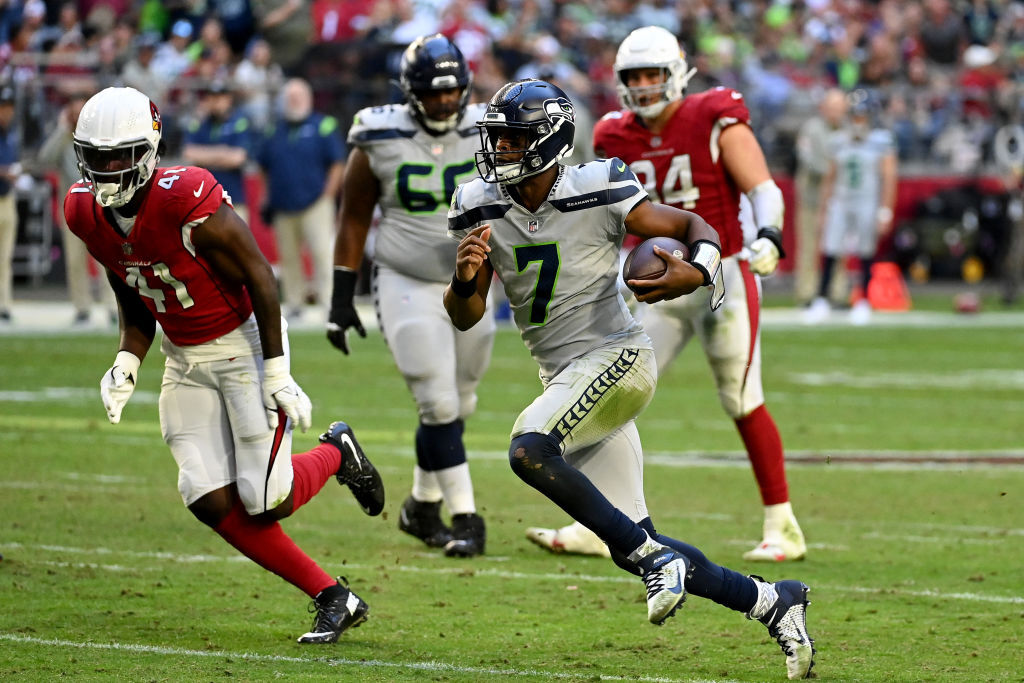 4/13
GLENDALE, ARIZONA – NOVEMBER 06: Geno Smith #7 of the Seattle Seahawks runs the ball during the fourth quarter of the game against the Arizona Cardinals at State Farm Stadium on November 06, 2022 in Glendale, Arizona. (Photo by Norm Hall/Getty Images)

Arizona is who I thought they were but I’m still trying to wrap my head around Seattle being a 6-3 division leader. Biggest surprise of 2022. 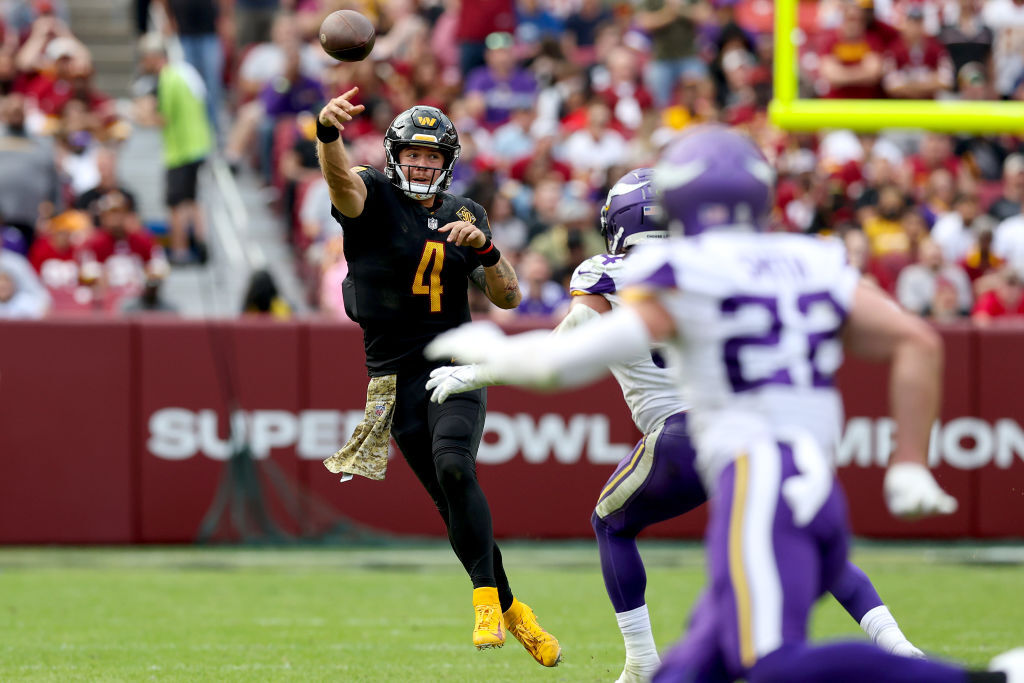 5/13
LANDOVER, MARYLAND – NOVEMBER 06: Taylor Heinicke #4 of the Washington Commanders throws the ball in the second half of the game against the Minnesota Vikings at FedExField on November 06, 2022 in Landover, Maryland. (Photo by Todd Olszewski/Getty Images)

One of the most intriguing matchups of the season was ruined by recycling: Washington’s continued roller coaster ride driven by Taylor “YOLO Ball” Heinicke and Minnesota’s dusting off of Kirk Cousins’ goofy catchphrase. I’d argue the refs blew it on the pick six that wasn’t but the fact remains: the Commanders’ only hope of making a playoff push rests on repeating the 2020 feat of handing an undefeated Pennsylvania team its first loss on home turf. 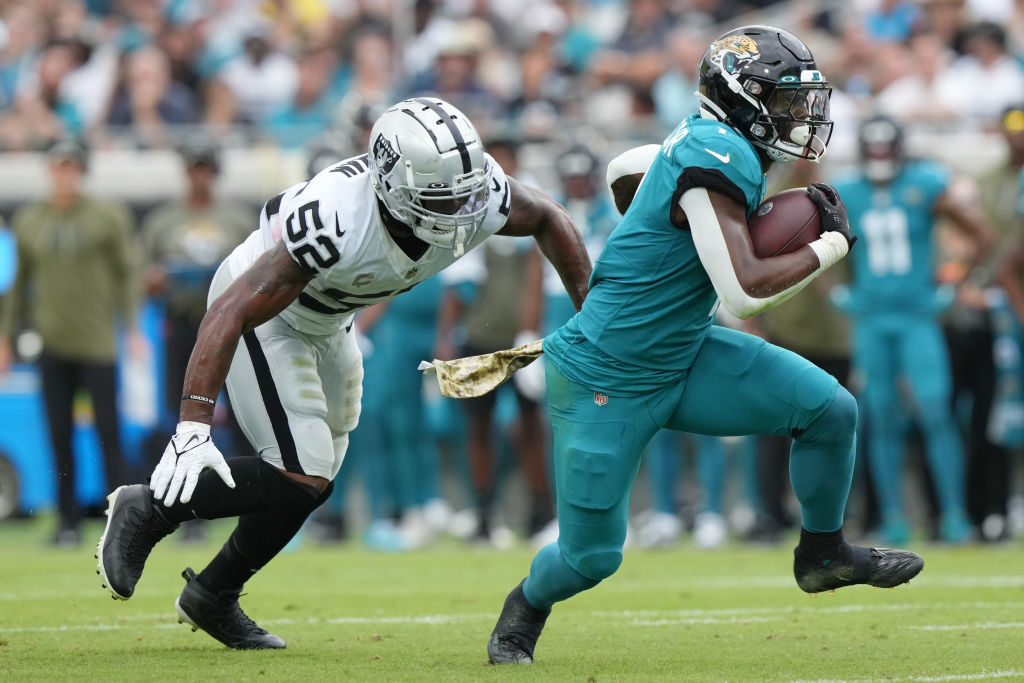 6/13
JACKSONVILLE, FLORIDA – NOVEMBER 06: Travis Etienne Jr. #1 of the Jacksonville Jaguars rushes the football as Denzel Perryman #52 of the Las Vegas Raiders chases him down during the second quarter of the game at TIAA Bank Field on November 06, 2022 in Jacksonville, Florida. (Photo by Eric Espada/Getty Images)

Look, back-to-back 1 p.m. kickoffs for Vegas is brutal, but a rare shutout-followed-by-blown-lead performance begs the question: Why was Josh McDaniels ever assumed to be better than Rich Bisaccia? 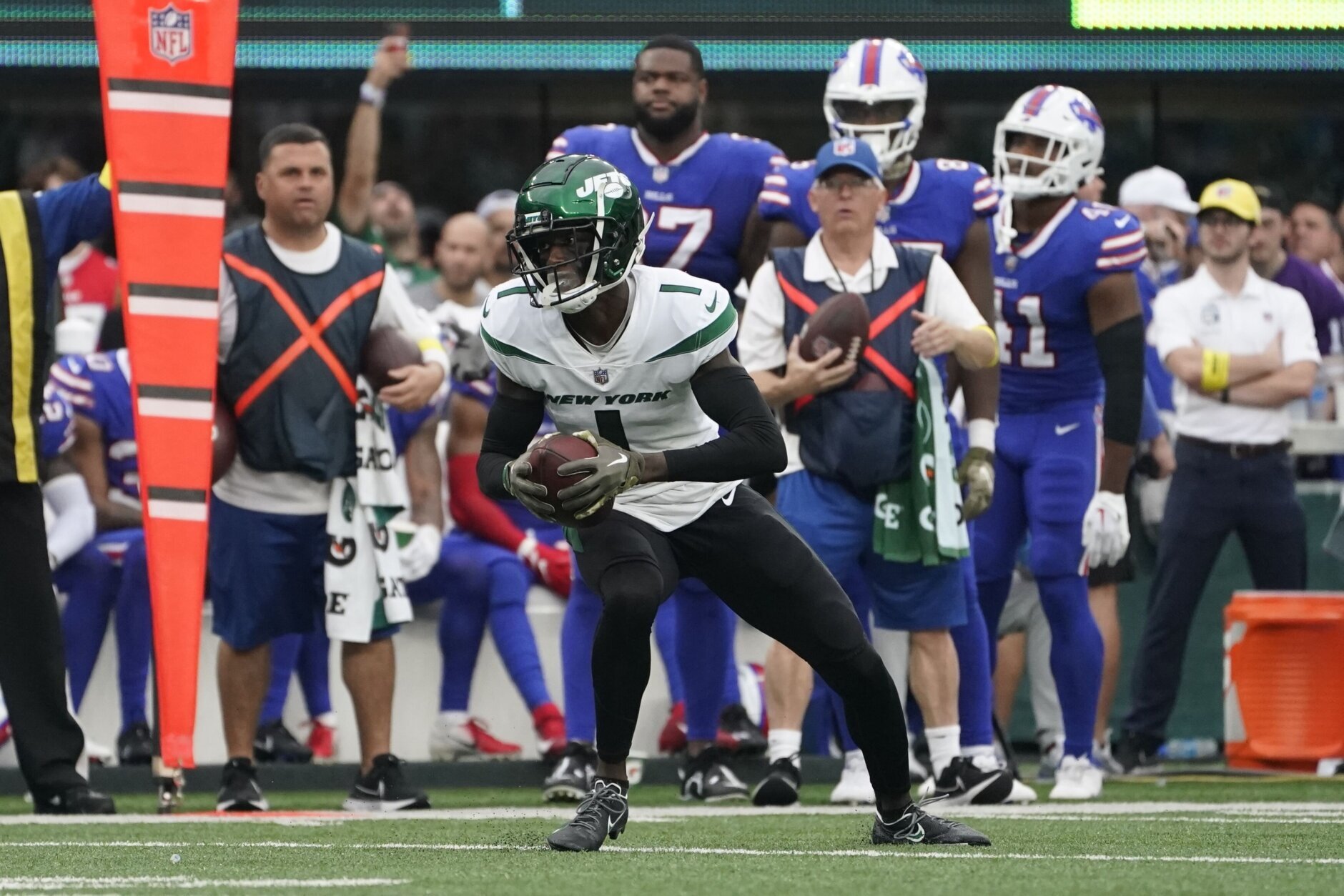 7/13
New York Jets cornerback Sauce Gardner (1) runs back an interception during the second half of an NFL football game against the Buffalo Bills, Sunday, Nov. 6, 2022, in East Rutherford, N.J. (AP Photo/John Minchillo)

Two takeaways from this game: The Jets are for real (4-0 against teams that enter the game with a winning record) and Josh Allen needs to shave that trash mustache. 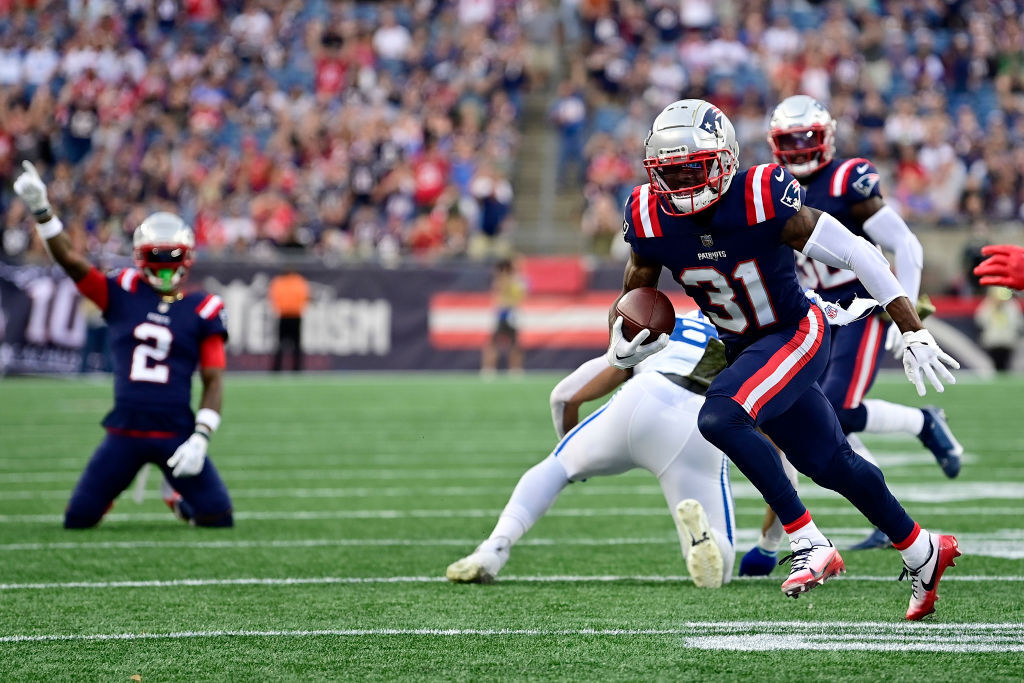 8/13
FOXBOROUGH, MASSACHUSETTS – NOVEMBER 06: Jonathan Jones #31 of the New England Patriots runs with the ball during the second half of a game against the Indianapolis Colts at Gillette Stadium on November 06, 2022 in Foxborough, Massachusetts. (Photo by Billie Weiss/Getty Images)

Indy’s unacceptable offense is almost certainly going to get Frank Reich fired — even though the Colts’ musical chairs at QB isn’t entirely his fault. Here’s an idea: Bring the former Terp back inside the Beltway to coach the Commanders’ sagging offense! 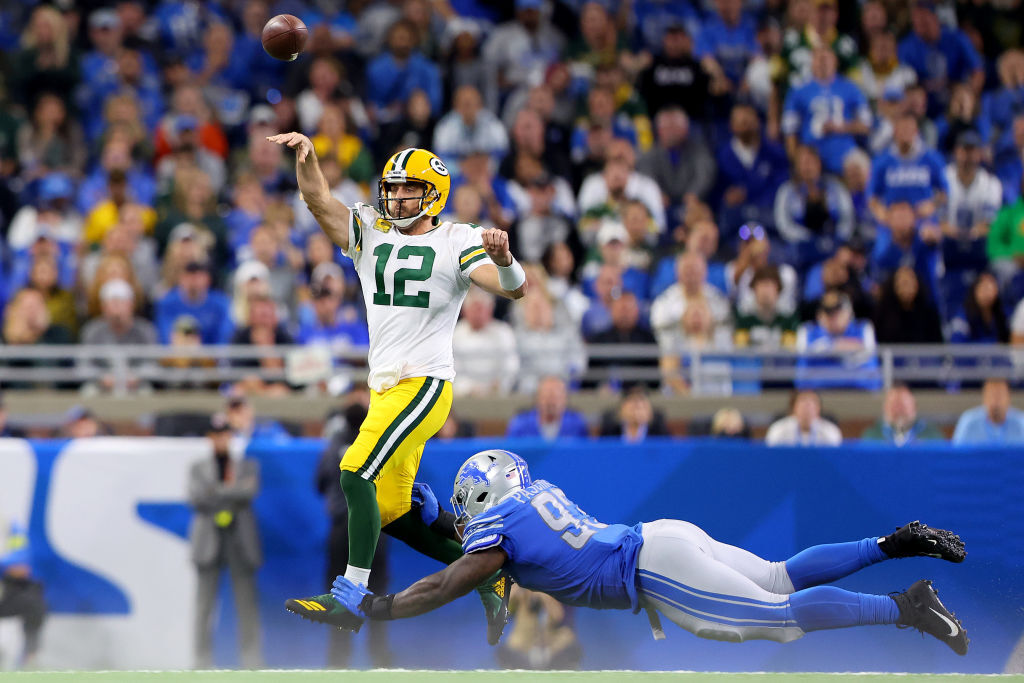 9/13
DETROIT, MICHIGAN – NOVEMBER 06: Aaron Rodgers #12 of the Green Bay Packers throws a pass in the fourth quarter as Josh Paschal #93 of the Detroit Lions dives for a tackle at Ford Field on November 06, 2022 in Detroit, Michigan. (Photo by Rey Del Rio/Getty Images)

Aaron Rodgers had his first career game with two red zone interceptions and his first 3-interception game since 2017. Green Bay’s issues aren’t all his fault, but he should have just walked away after last season. 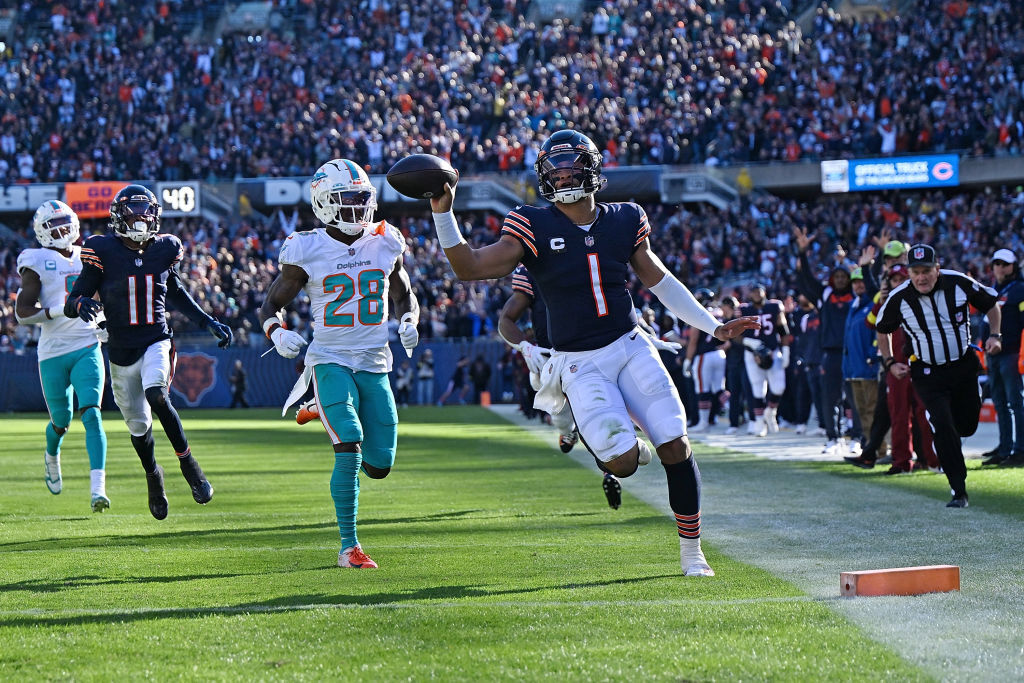 10/13
CHICAGO, ILLINOIS – NOVEMBER 06: Justin Fields #1 of the Chicago Bears scores a touchdown during the second half in the game against the Miami Dolphins at Soldier Field on November 06, 2022 in Chicago, Illinois. (Photo by Quinn Harris/Getty Images)

Tua had more passing yardage but Justin Fields was the better player in Chicago, posting a significantly higher QBR (95.4 to 81.4) and his 178 rushing yards were the most by a quarterback in a single game since 1950. Adding Chase Claypool is nice, but the Bears’ offseason focus has to center on giving Fields some help before it’s too late. 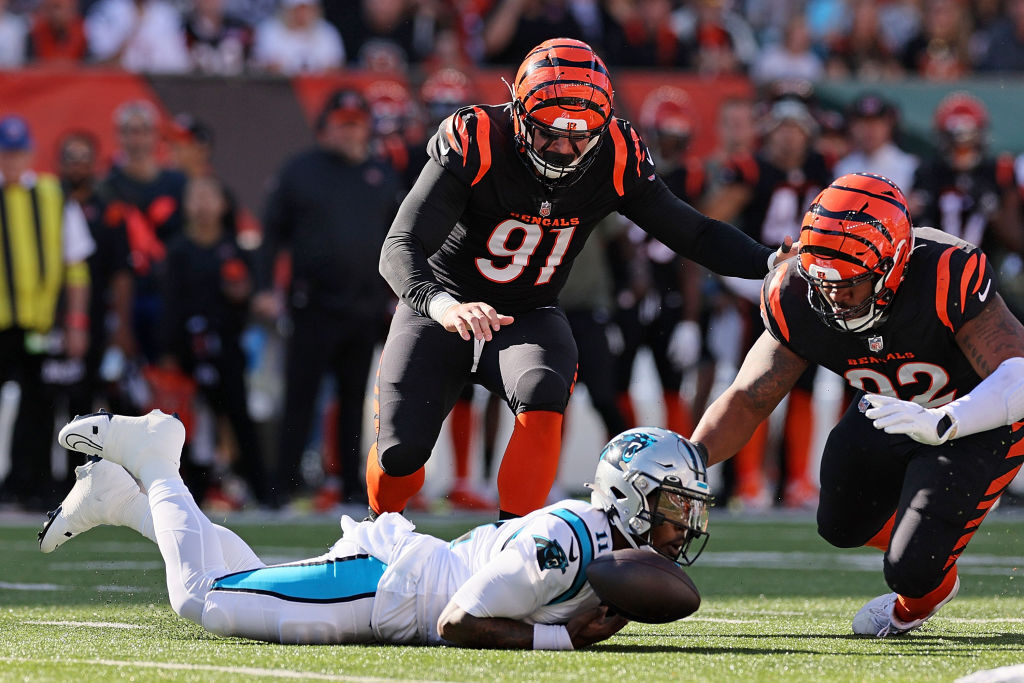 11/13
CINCINNATI, OHIO – NOVEMBER 06: PJ Walker #11 of the Carolina Panthers recovers a fumble during the first half in the game against the Cincinnati Bengals at Paycor Stadium on November 06, 2022 in Cincinnati, Ohio. (Photo by Andy Lyons/Getty Images)

This game hadn’t even reached halftime and Josh Mixon won fantasy games across the nation, while P.J. Walker reverted back to XFL form to all but ensure Baker Mayfield will again be the starter in Carolina. This game was like watching a kid in Cincinnati play Madden on rookie — right down to the celebrations. 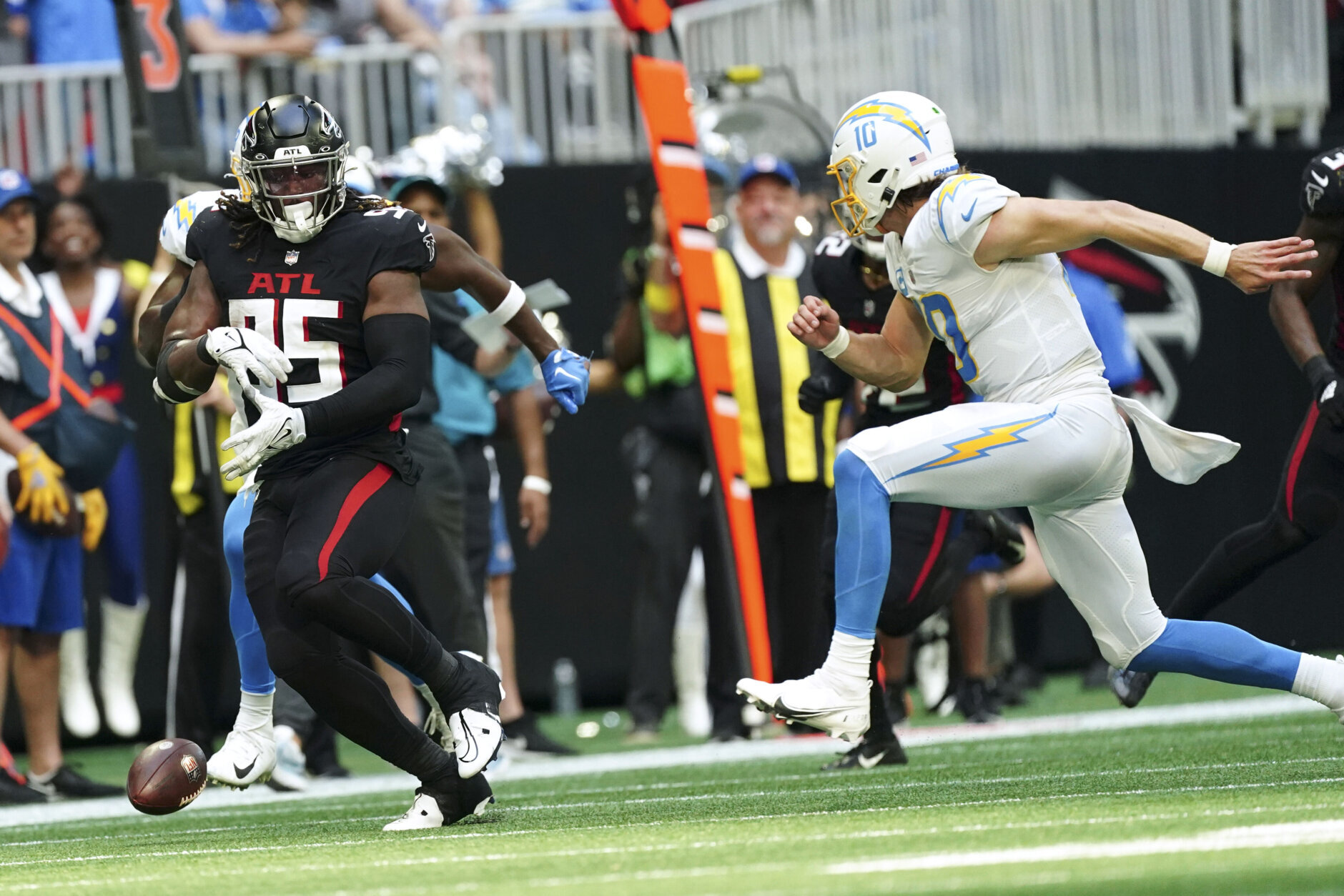 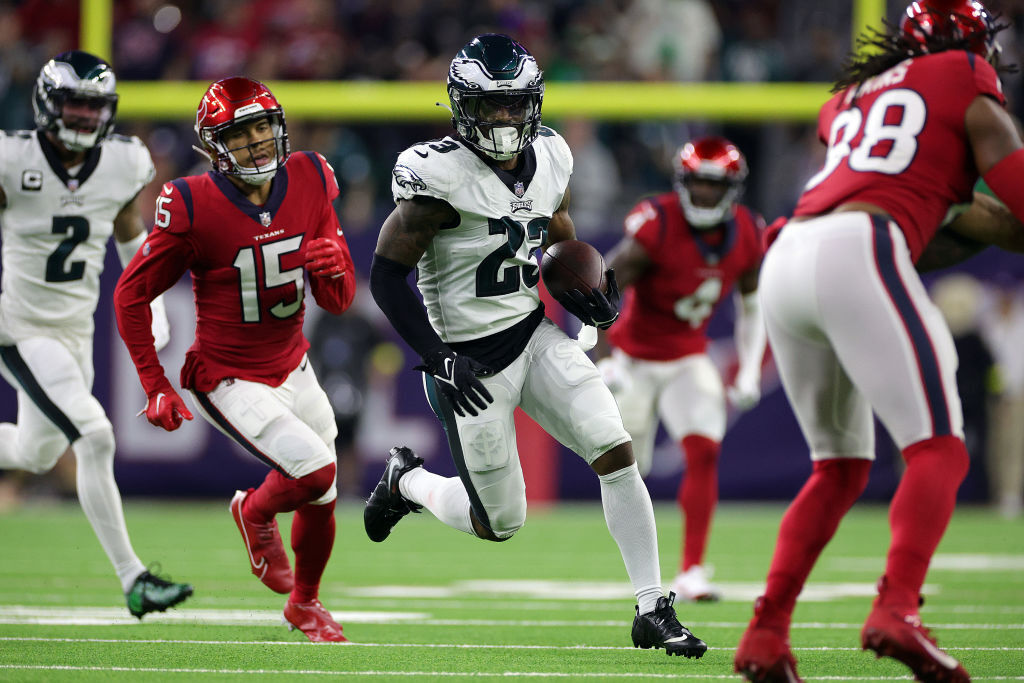 13/13
HOUSTON, TEXAS – NOVEMBER 03: C.J. Gardner-Johnson #23 of the Philadelphia Eagles runs a pass interception against the Houston Texans in the third quarter at NRG Stadium on November 03, 2022 in Houston, Texas. (Photo by Carmen Mandato/Getty Images)

Philadelphia is the first team since the 1972 Steelers with a positive turnover differential in each of the first eight games of a season. Washington’s only hope next Monday night is to reverse that trend in a major way.