A scary good contender, a vexing hex and trade winds blow in an NFL Week 8 Recap worthy of Halloween. 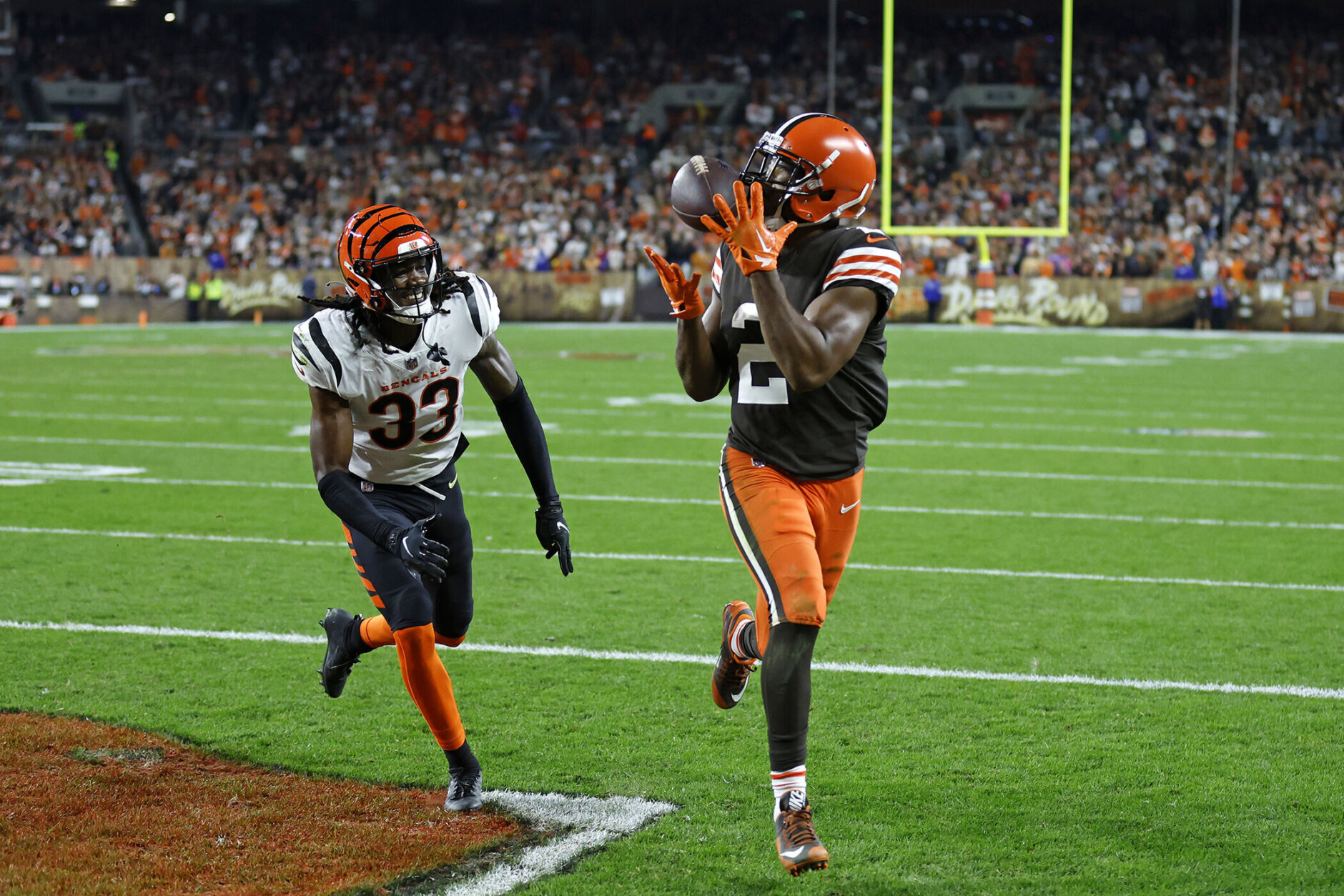 This eyesore now means Cincinnati has an NFL-record 13 straight road primetime losses and has dropped their last five games to rival Cleveland. Why, other than the Bengals having the most Halloween-looking uniforms, would this lousy matchup be scheduled for a Monday night? 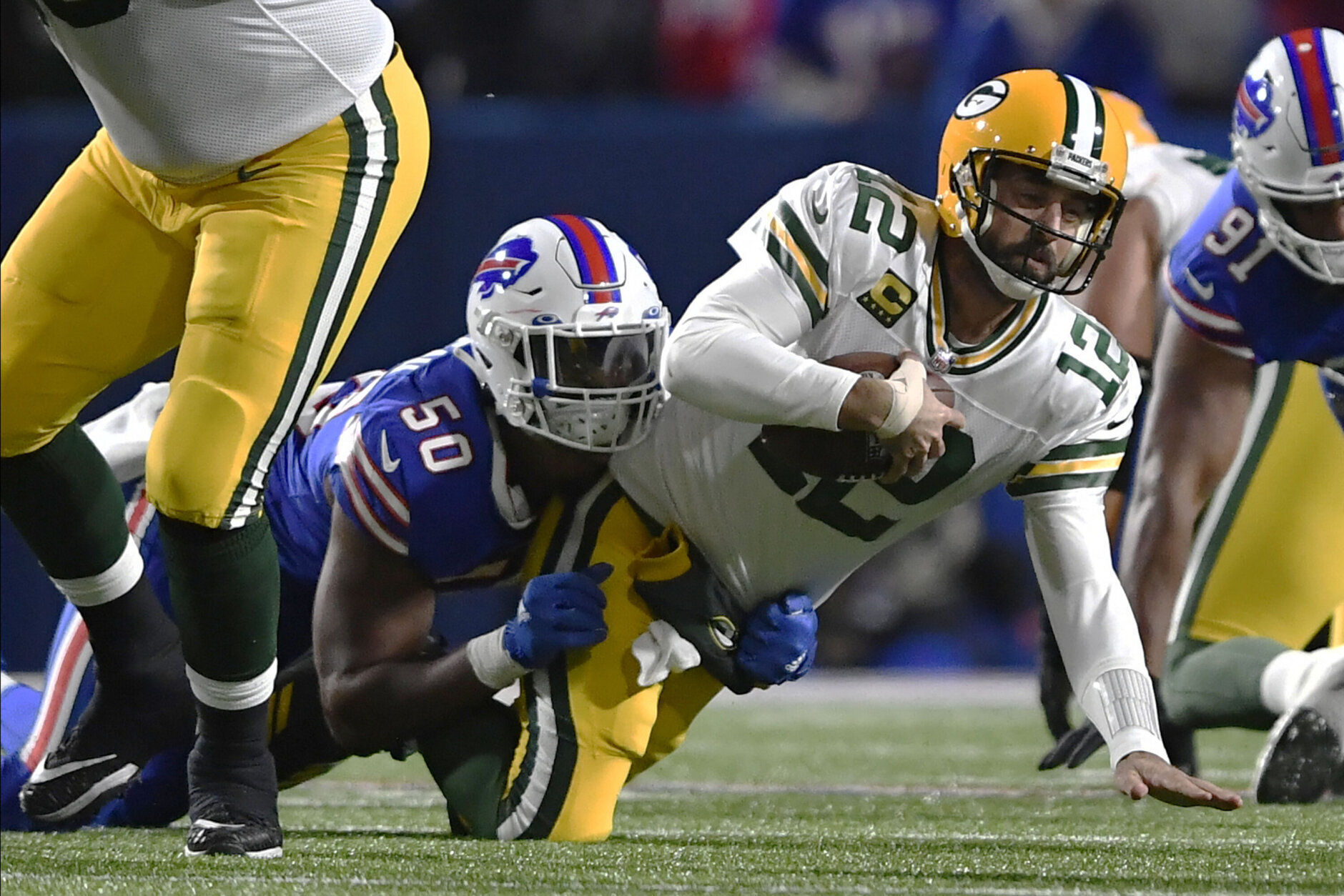 If you thought Aaron Rodgers was calling out the Packers before, just wait till his next therapy session with Pat McAfee.

Buffalo should feel good about this because they played a C-level game and still beat a future Hall of Fame QB by double digits. The Bills are scary good. 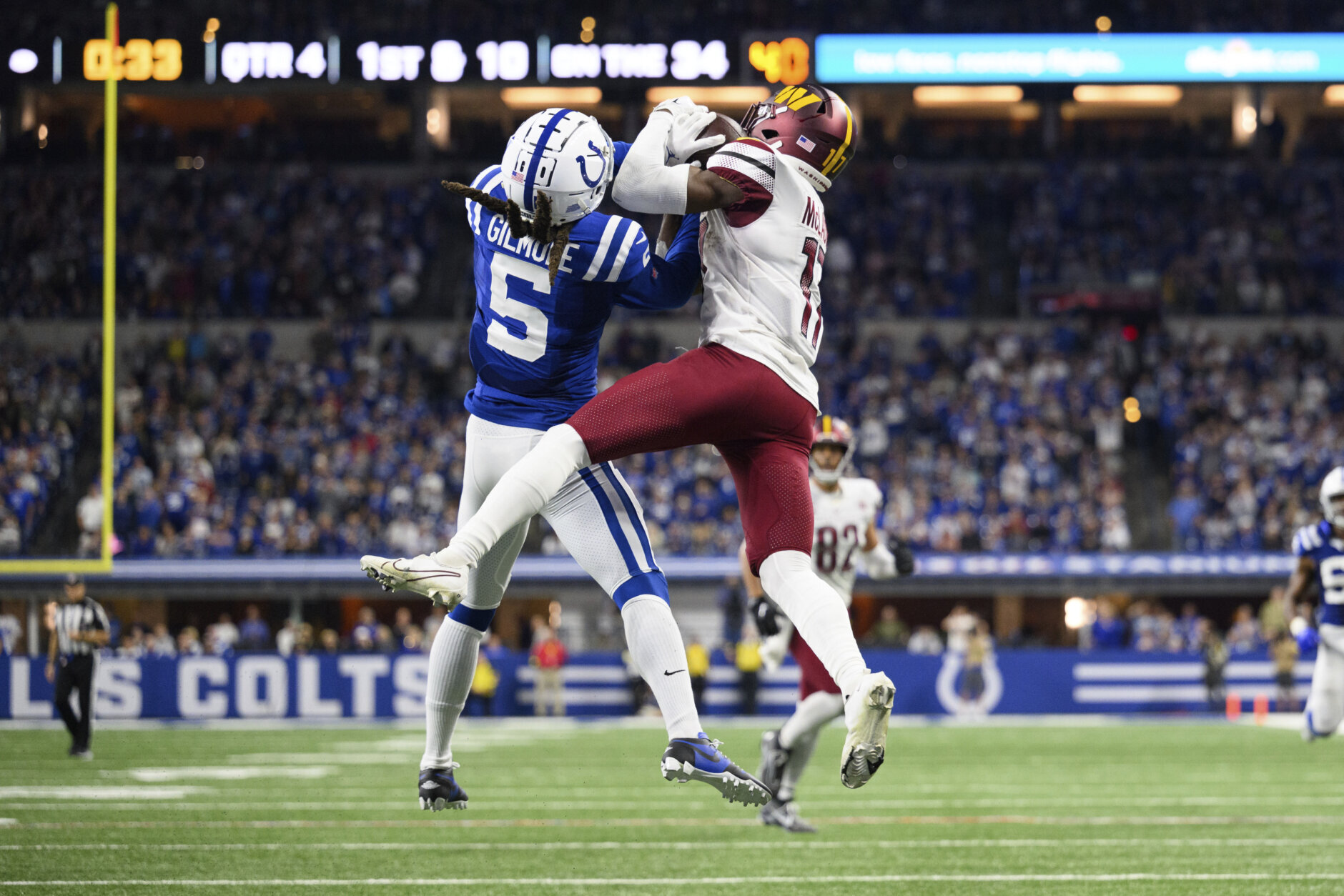 Washington’s first win over the Colts in 20 years and first in Indy since 1994 was brought to you by Indianapolis’ own Terry McLaurin, “that dude” who is now 5-0 whenever he steps foot on the turf at Lucas Oil Stadium. Matt Ryan will never set foot there again, and this latest dose of Heinicke magic should ensure the same is true for Carson Wentz in Washington. 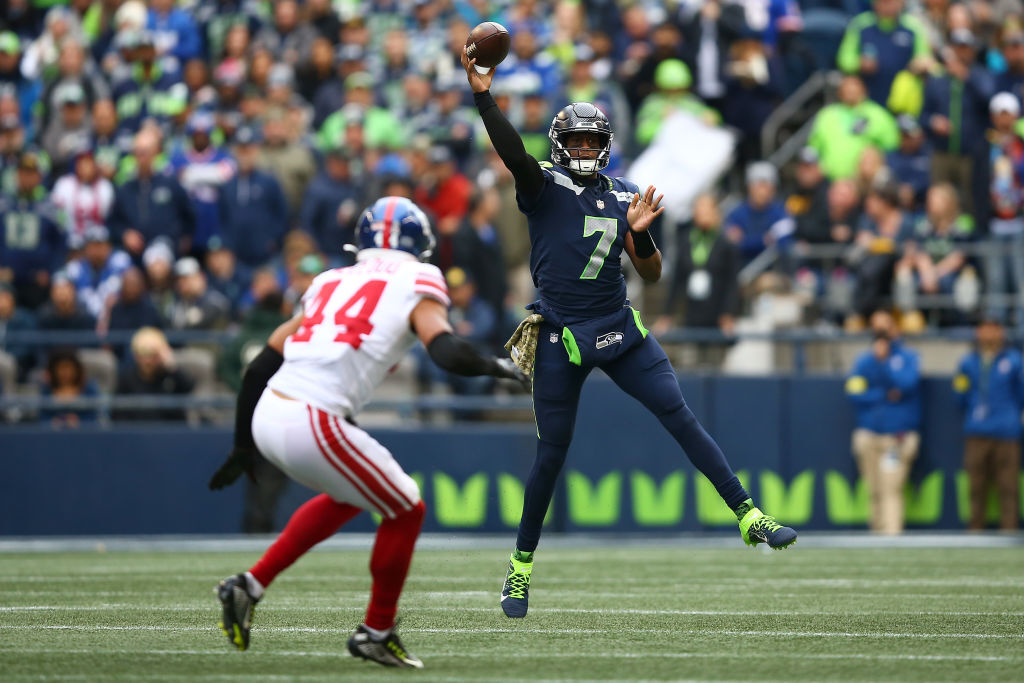 4/15
SEATTLE, WASHINGTON — OCTOBER 30: Geno Smith #7 of the Seattle Seahawks passes against the New York Giants during the first half at Lumen Field on October 30, 2022 in Seattle, Washington. (Photo by Lindsey Wasson/Getty Images)

Remember when Geno Smith was the first Black quarterback to start for the New York Giants?

Nobody saw Seattle sitting atop the NFC West this deep into the season. No. Body. Give Geno Comeback Player of the Year and make Pete Carroll Coach of the Year right damn now. 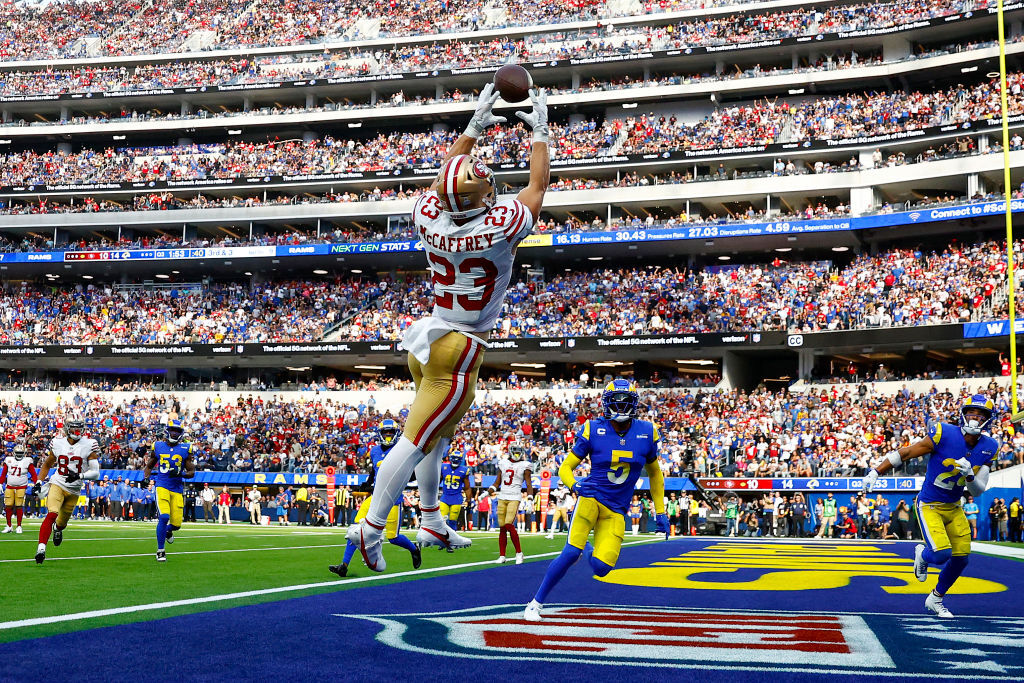 5/15
INGLEWOOD, CALIFORNIA — OCTOBER 30: Christian McCaffrey #23 of the San Francisco 49ers catches the ball for a touchdown as Jalen Ramsey #5 and Taylor Rapp #24 of the Los Angeles Rams defend during the third quarter at SoFi Stadium on October 30, 2022 in Inglewood, California. (Photo by Ronald Martinez/Getty Images)

Christian McCaffrey is the 11th player in NFL history to have a touchdown rushing, receiving and passing in the same game. The only other players to do it since the merger were Walter Payton, David Paten and LaDainian Tomlinson.

But the Niners still made a desperation move that will ultimately undermine their ability to field a consistent winner. Never overpay for a running back. 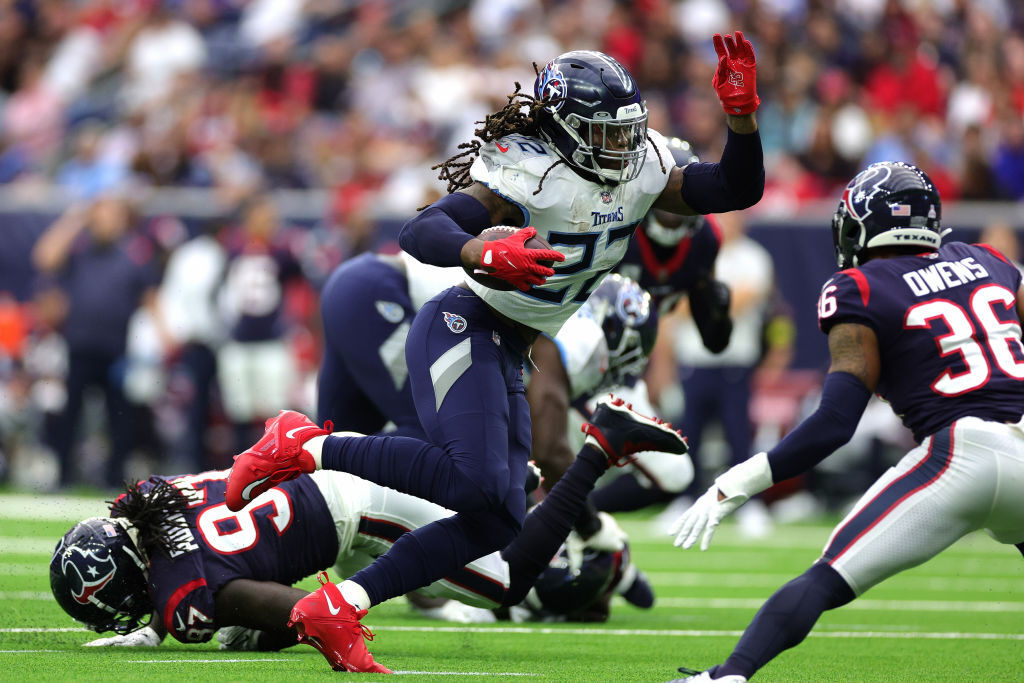 6/15
HOUSTON, TEXAS — OCTOBER 30: Derrick Henry #22 of the Tennessee Titans rushes for a touchdown as Jonathan Owens #36 and Mario Addison #97 of the Houston Texans defend during the second quarter at NRG Stadium on October 30, 2022 in Houston, Texas. (Photo by Carmen Mandato/Getty Images)

Derrick Henry continued his unprecedented run of dominance at Houston’s expense, matching the record with his sixth 200-yard rushing game to help Tennessee overcome a shaky debut by rookie Malik Willis. The Titans will win the AFC South by default. 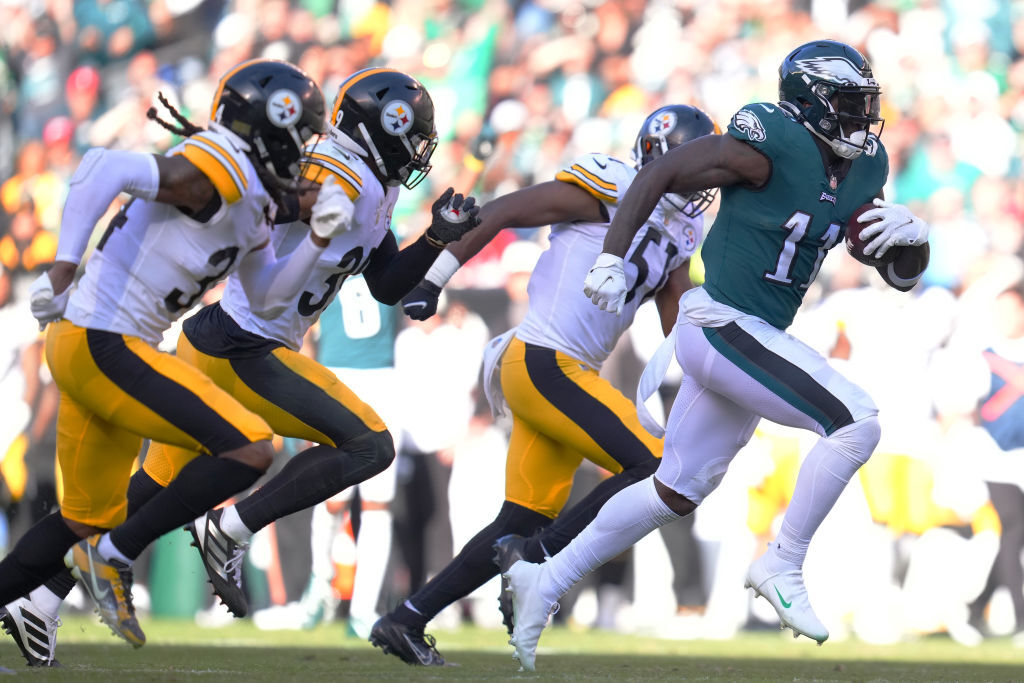 7/15
PHILADELPHIA, PENNSYLVANIA — OCTOBER 30: A.J. Brown #11 of the Philadelphia Eagles runs with the ball after a catch in the fourth quarter of a game against the Pittsburgh Steelers at Lincoln Financial Field on October 30, 2022 in Philadelphia, Pennsylvania. (Photo by Mitchell Leff/Getty Images)

Philadelphia is 7-0 for only the second time in franchise history, joining Andy Reid’s 2004 squad that lost the Super Bowl. Wouldn’t it be something if Eagles history repeats itself — only with Reid beating his former team in the end? 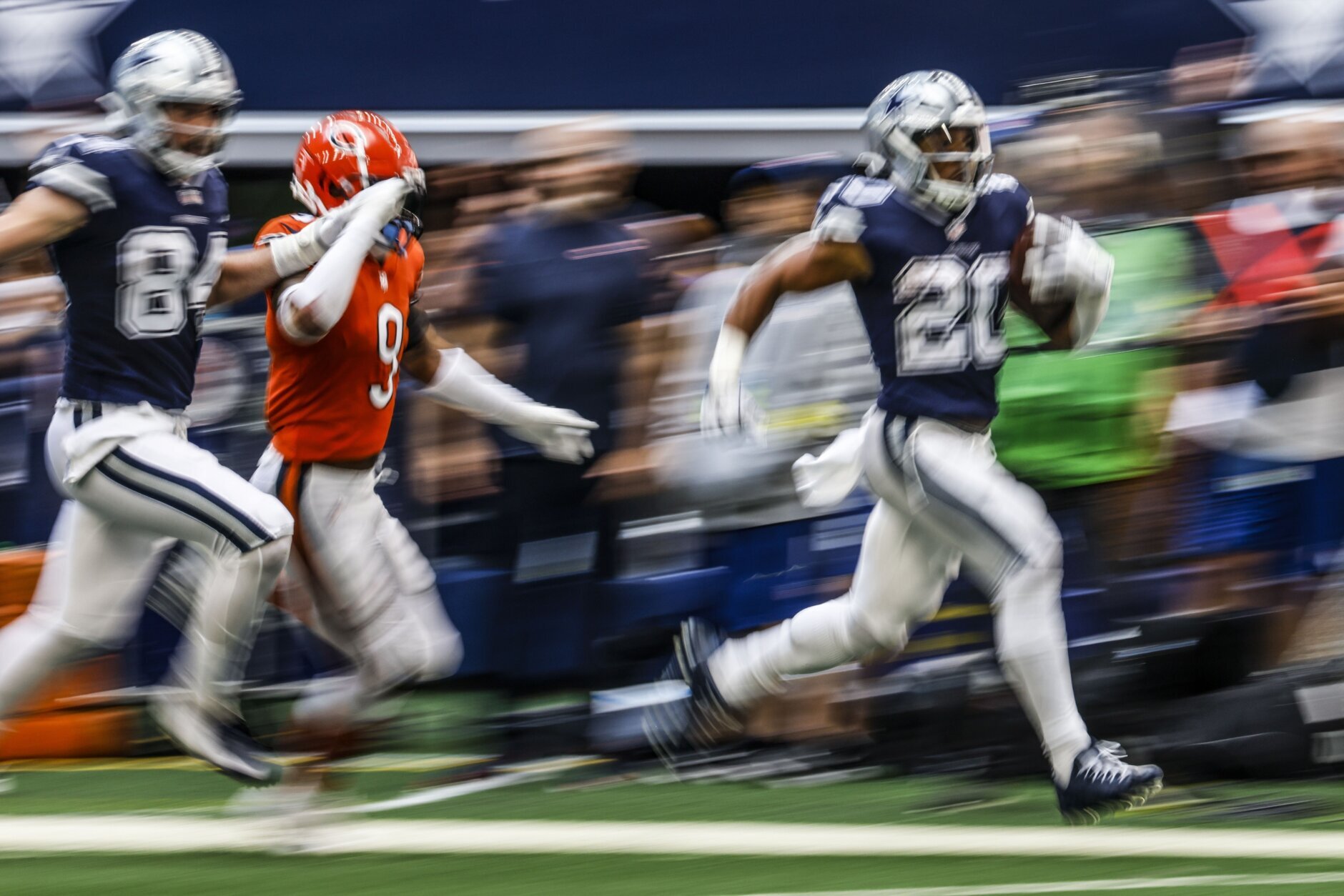 8/15
Dallas Cowboys’ Tony Pollard runs for a touchdown during the second half of an NFL football game against the Chicago Bears Sunday, Oct. 30, 2022, in Arlington, Texas. (AP Photo/Ron Jenkins)

Dallas tried hard to jinx themselves by wearing their navy jerseys at home but there’s no greater hex than the one in the owner’s box.

Jerry Jones continues to push Zeke, even though it’s been clearly demonstrated that the Cowboys’ offense runs better with Tony Pollard as the lead horse: Dallas is 8-0 and averages 37 points per game when Pollard gets 15 or more touches.

Here’s hoping Jerry continues to undermine his own best effort at “gloryhole.” 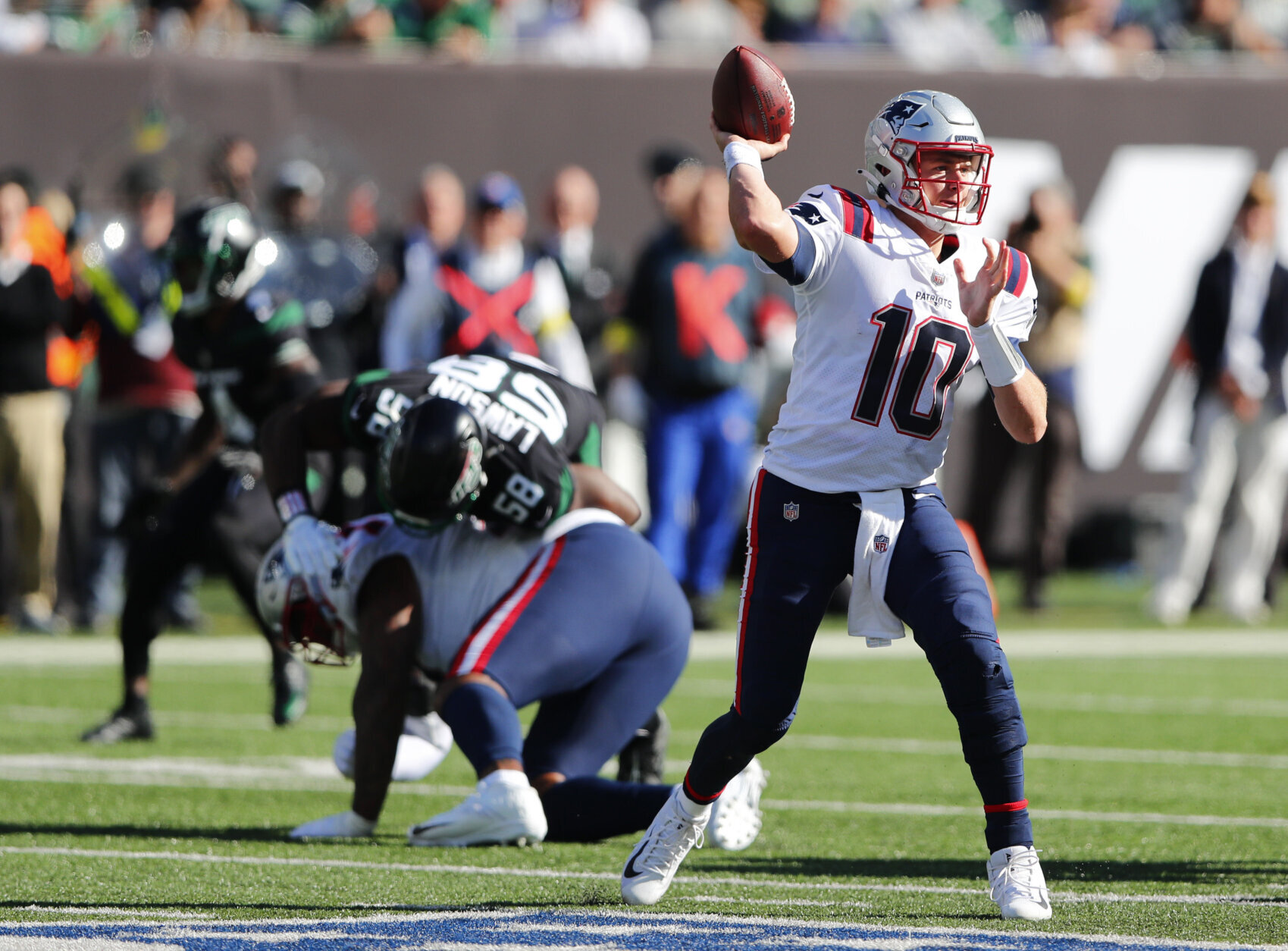 It’s a week later than expected, but Bill Belichick got milestone career win No. 325 thanks to New England’s 13th straight victory over the New York Jets. As surprisingly good as Gang Green has been (this was the first time in 21 years they entered this matchup as the better team!), their 1-3 home record leads me to believe that they are who we thought they were. 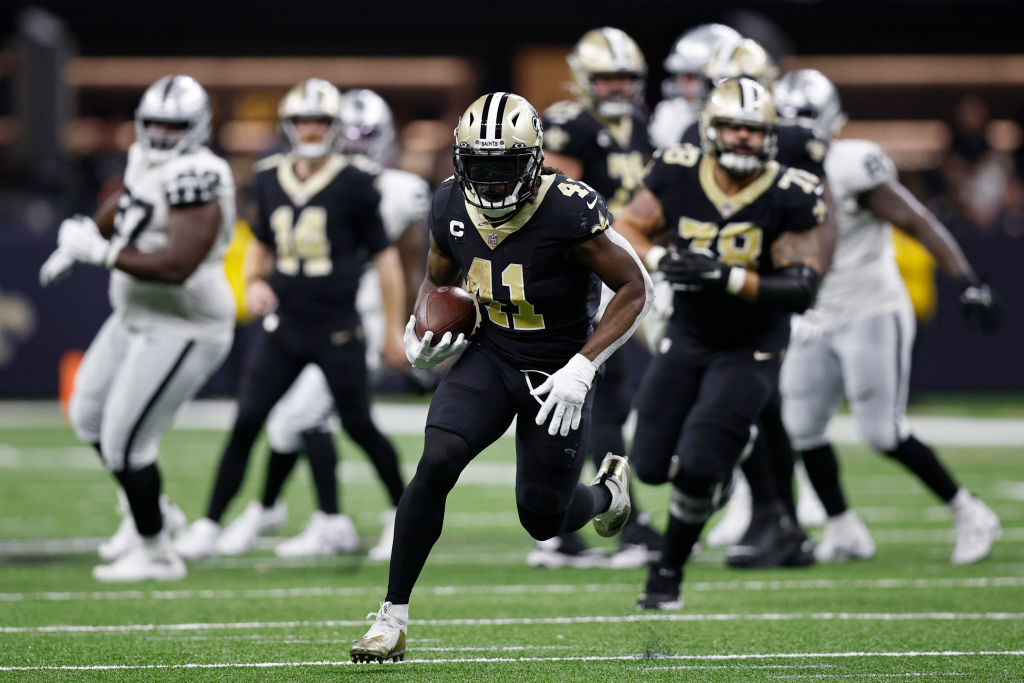 10/15
NEW ORLEANS, LOUISIANA — OCTOBER 30: Alvin Kamara #41 of the New Orleans Saints runs for a touchdown in the third quarter of a game against the Las Vegas Raiders at Caesars Superdome on October 30, 2022 in New Orleans, Louisiana. (Photo by Sean Gardner/Getty Images)

Las Vegas has to come east for a 1 p.m. kickoff and the Raiders suffer their first shutout loss since 2014 — and against the team that allowed the second-most points in the NFL entering the day. Coincidence? Nah, just the Dave Preston Corollary striking again.

But watch New Orleans leading up to Tuesday’s trade deadline — Alvin Kamara’s monster game felt a lot like a showcase to see if a RB-needy contender (*cough* BUFFALO *cough*) bets the farm that he’s the missing piece to their championship puzzle. 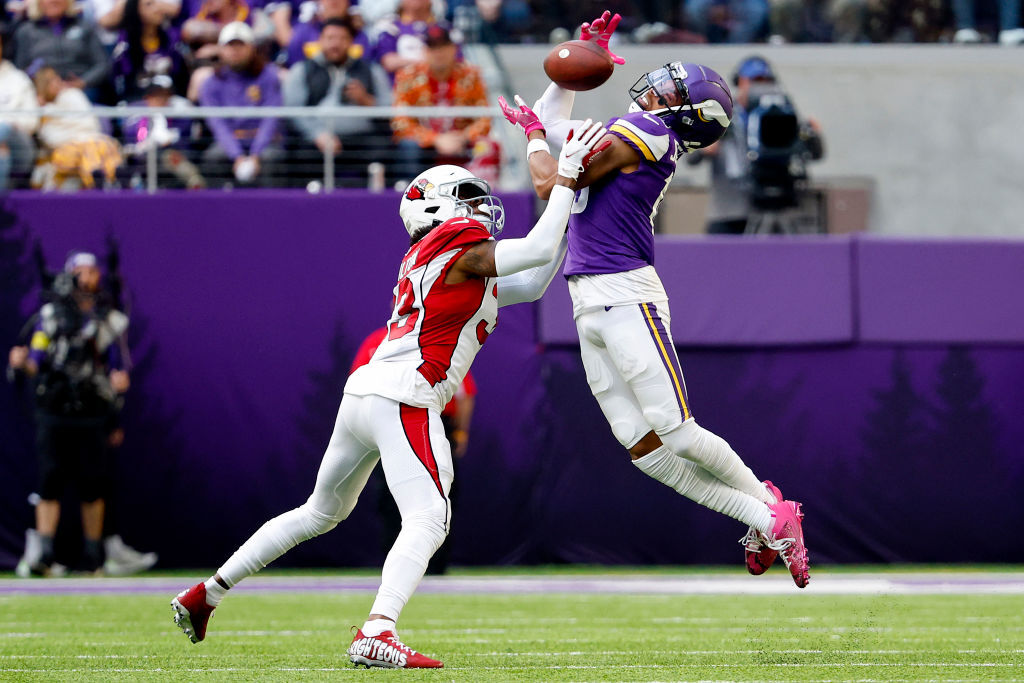 11/15
MINNEAPOLIS, MINNESOTA — OCTOBER 30: Justin Jefferson #18 of the Minnesota Vikings catches the ball over Antonio Hamilton #33 of the Arizona Cardinals during the third quarter at U.S. Bank Stadium on October 30, 2022 in Minneapolis, Minnesota. (Photo by David Berding/Getty Images)

If Arizona’s struggles are character building, Kliff Kingsbury should be a refreshing addition to literally any political ballot. 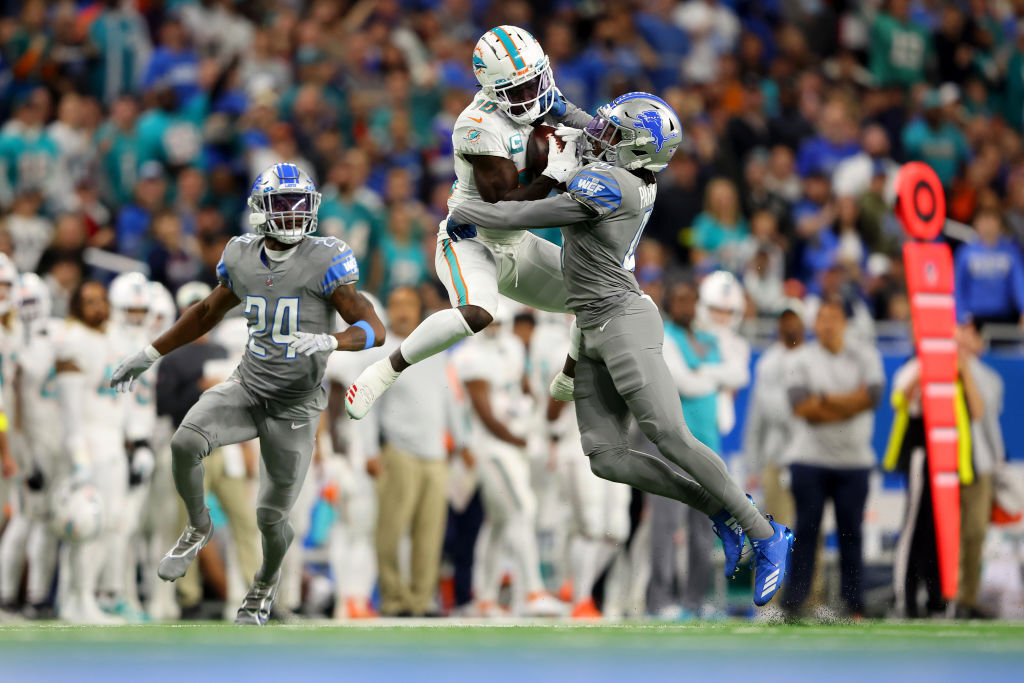 12/15
DETROIT, MICHIGAN — OCTOBER 30: Tyreek Hill #10 of the Miami Dolphins catches a pass against AJ Parker #41 of the Detroit Lions at Ford Field on October 30, 2022 in Detroit, Michigan. (Photo by Rey Del Rio/Getty Images)

Detroit had a rare 27-point first half and still found a way to lose. Never forget, the Lions fired Jim Caldwell following three winning seasons in four years and the woebegone franchise’s last trip to the postseason in 2016. Compared to what Detroit is now, that should get Caldwell a damn statue next to the one coming for Barry Sanders. 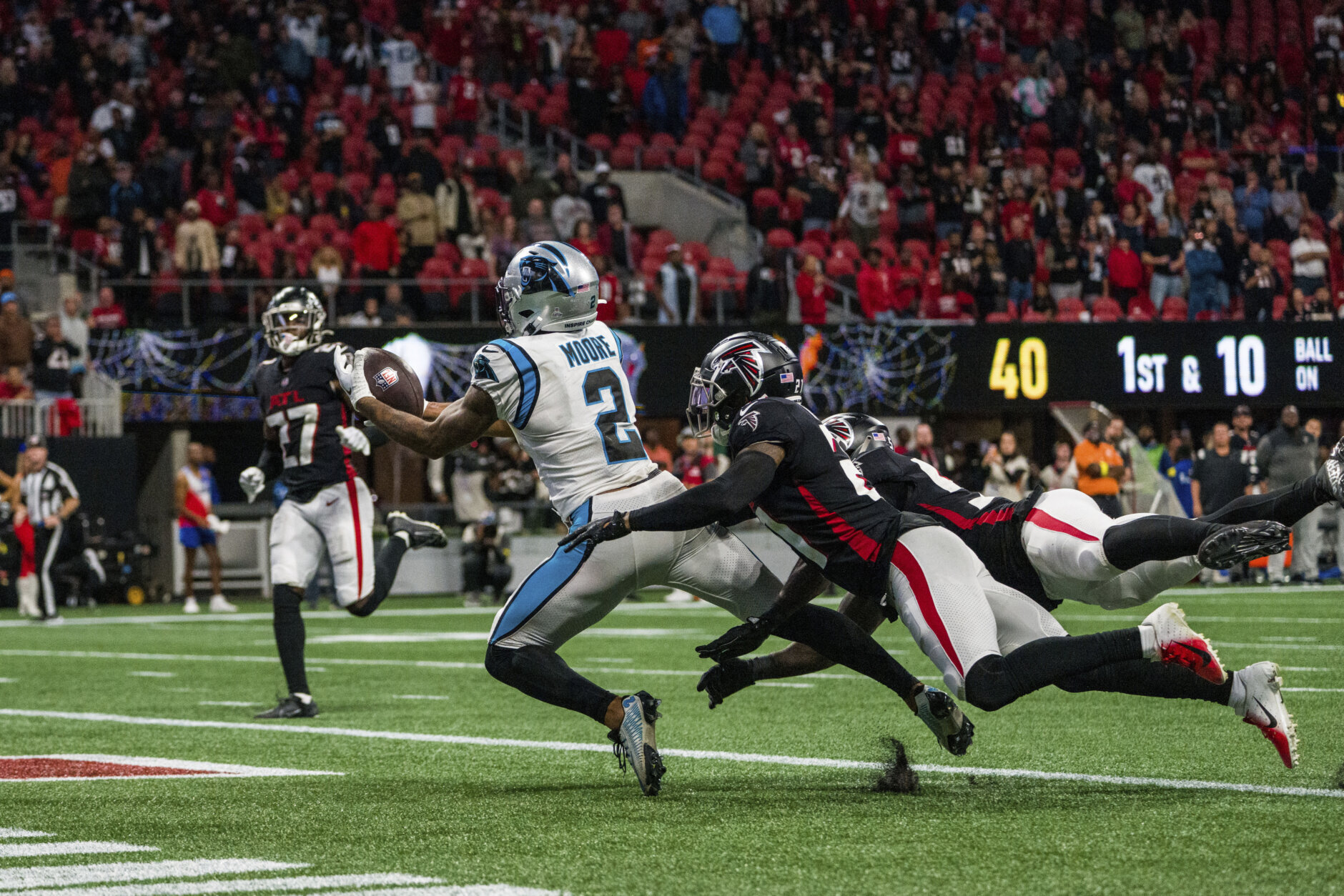 Atlanta has three straight home wins for the first time since 2017-18 and sits atop the worst division in football. Considering how Carolina kicked this one away, neither will last for much longer. 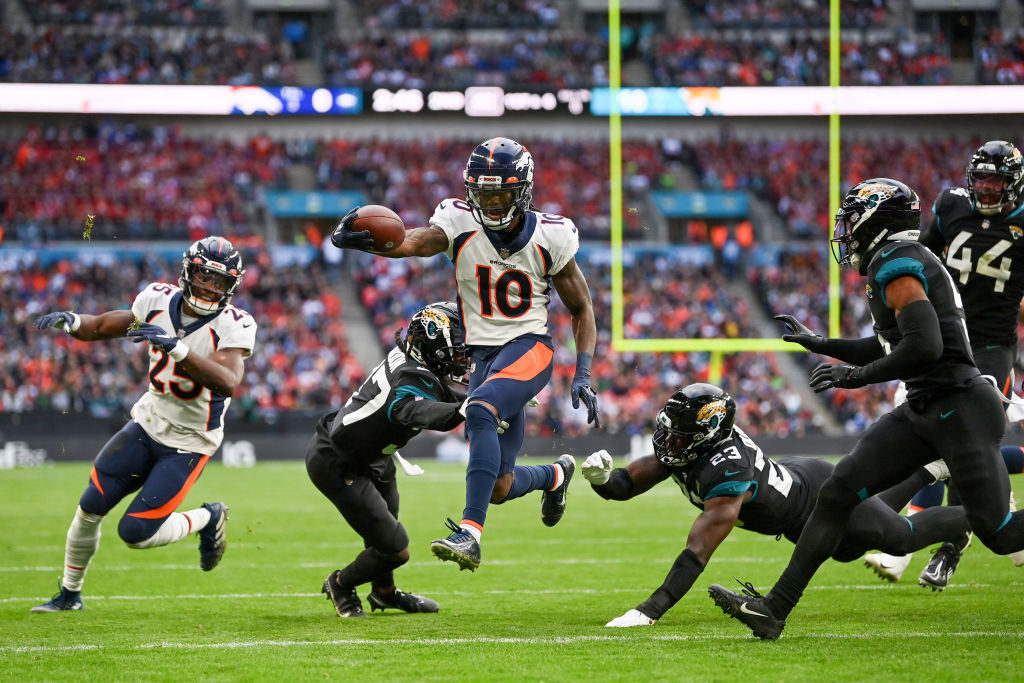 Somehow, this lousy matchup generated the largest crowd in the history of NFL international games (86,215) and increased the likelihood that Bradley Chubb stays in Denver. Can’t wait to see what Russell “Mr. High Knee” Wilson does to celebrate. 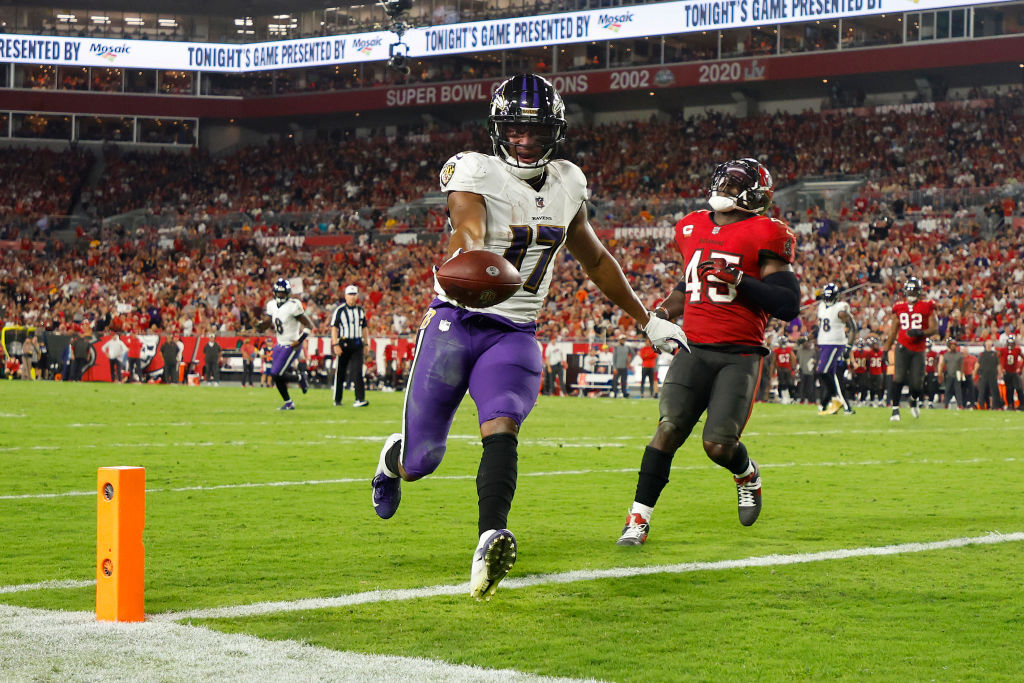 15/15
TAMPA, FLORIDA — OCTOBER 27: Kenyan Drake #17 of the Baltimore Ravens scores a touchdown against the Tampa Bay Buccaneers during the third quarter at Raymond James Stadium on October 27, 2022 in Tampa, Florida. (Photo by Mike Ehrmann/Getty Images)

Tom Brady’s in the midst of his first 3-game slide since 2002 and Todd Bowles is uncharacteristically swearing up a storm — but the reality is, Tampa is still pretty damn dangerous.

But so is Baltimore. Regardless of opponent, rushing for 231 yards in an NFL game — 204 in the second half — on the road, on a short week, is impressive. If the Ravens can get even close to healthy, this could be the team to beat in the AFC.