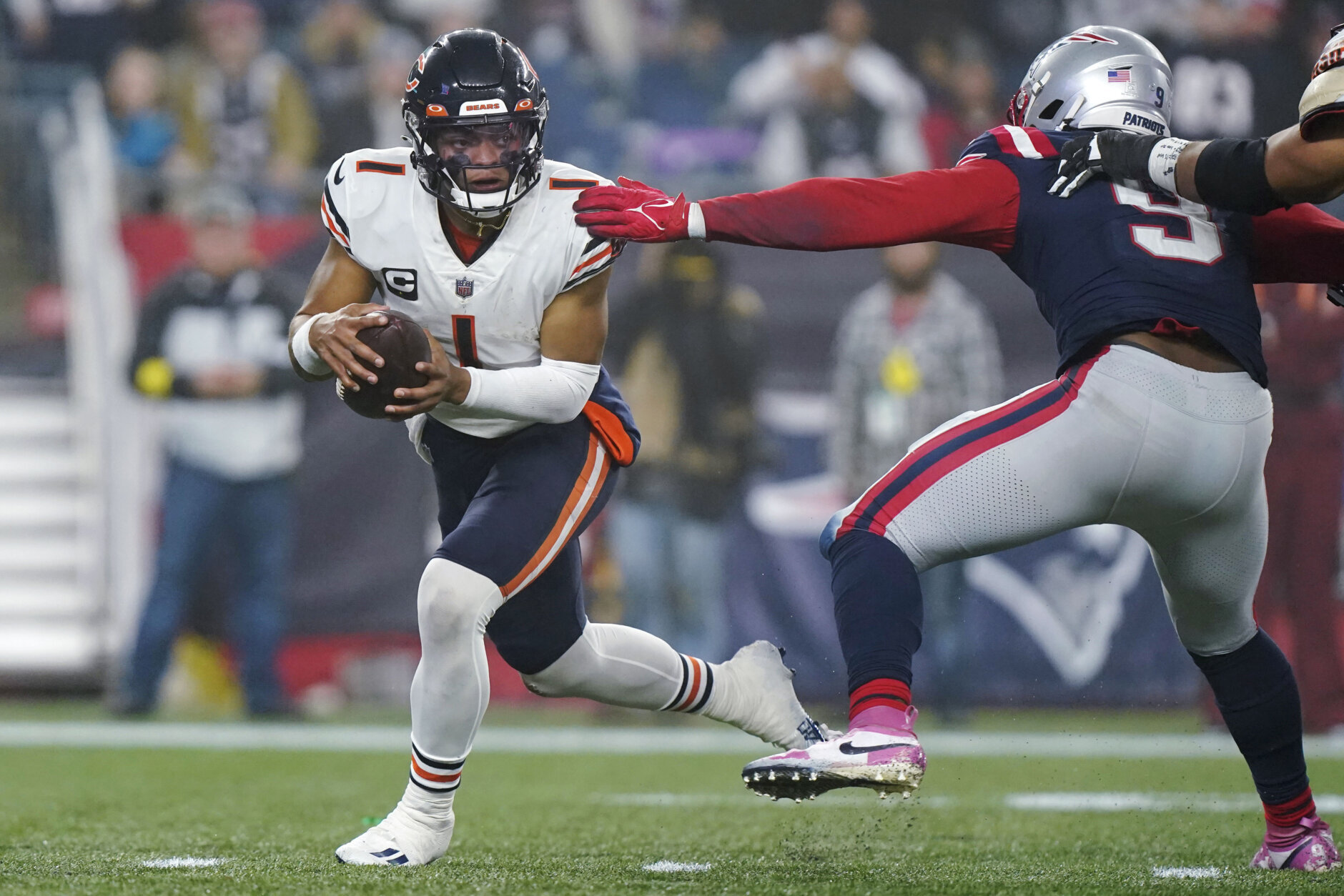 Either way, Bill Belichick was going to make history against the Bears. It just wasn’t the history he wanted.

Belichick missed out on passing George “Papa Bear” Halas for second on the all-time coaching victories list at the expense of Halas’ old team but it was Chicago’s first-ever win in Foxborough and the highest-scoring game of Justin Fields’ career. If only for one night, the Bears have a better QB situation than the Patriots. 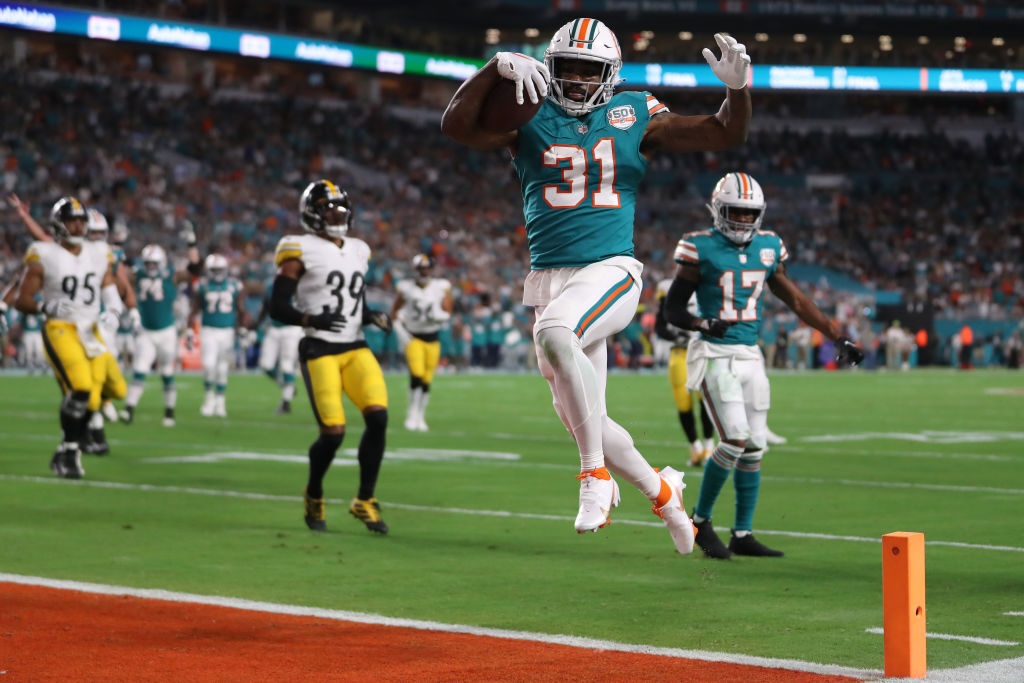 2/14
Raheem Mostert #31 of the Miami Dolphins scores a touchdown during the first quarter against the Pittsburgh Steelers at Hard Rock Stadium on October 23, 2022 in Miami Gardens, Florida. (Photo by Megan Briggs/Getty Images)

As part of the celebration of the 50th anniversary of the NFL’s only perfect season, Miami marked down the concessions to 1972 prices — and apparently discounted the football too. The Dolphins defense bailed out a rusty Tua-led offense and spoiled the return of former Fins Brian Flores and Minkah Fitzpatrick to stay in the AFC East race. 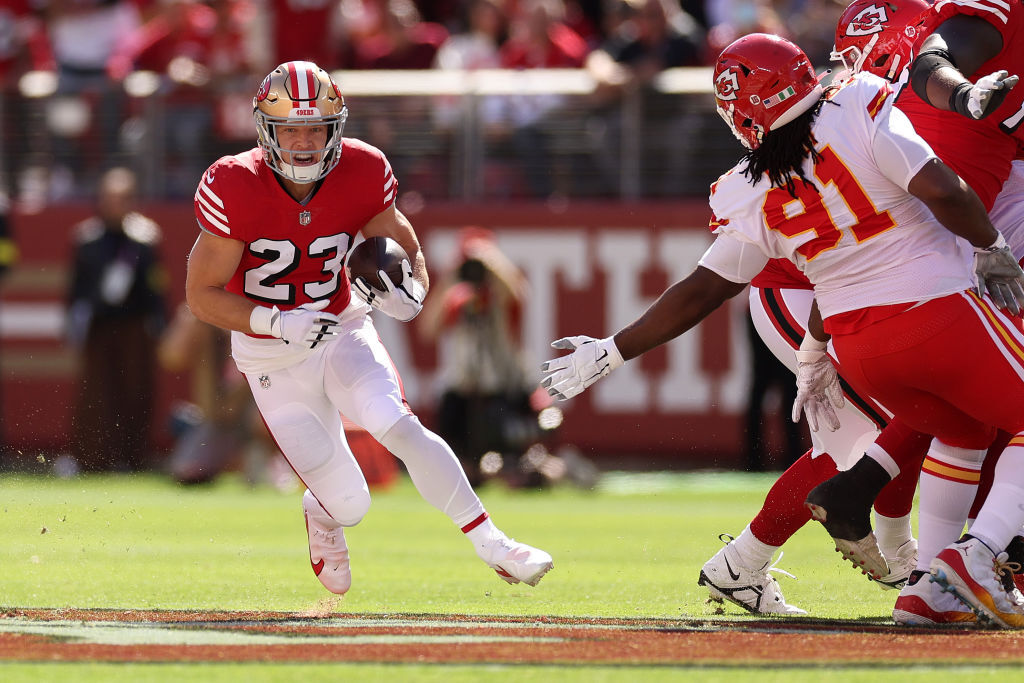 3/14
Christian McCaffrey #23 of the San Francisco 49ers rushes the ball in the first quarter against the Kansas City Chiefs at Levi’s Stadium on October 23, 2022 in Santa Clara, California. (Photo by Ezra Shaw/Getty Images)

San Francisco demonstrated a reckless level of desperation by trading for Christian McCaffrey, which is a luxury the Niners can’t afford at the price they paid. We’re about to find out how much job security Shanahan and John Lynch really have. 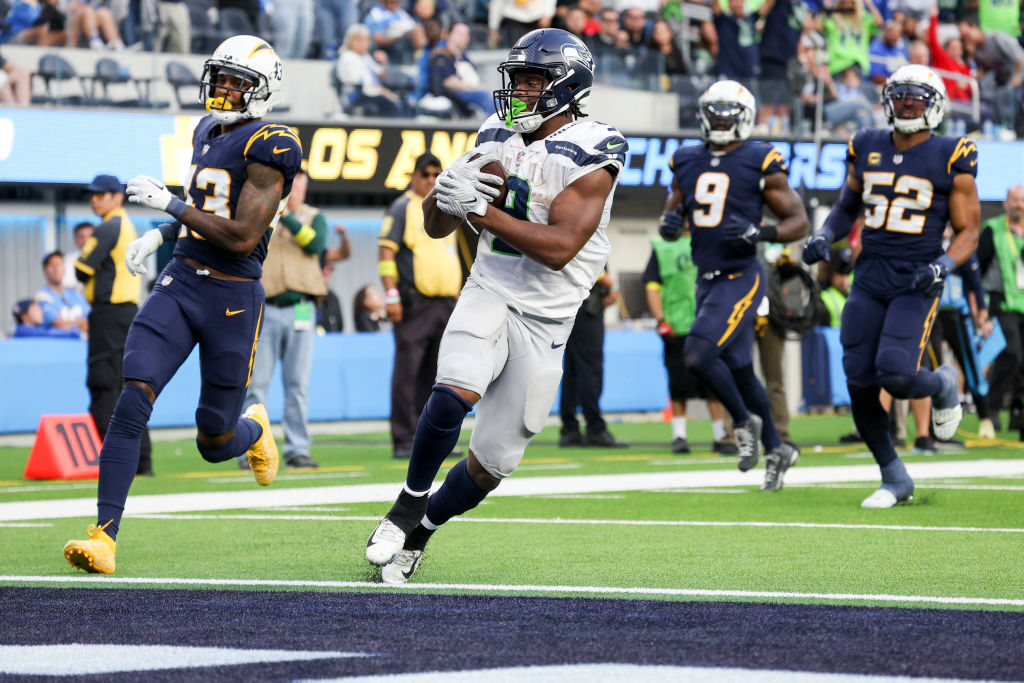 4/14
Kenneth Walker III #9 of the Seattle Seahawks scores a touchdown in the fourth quarter of the game against the Los Angeles Chargers at SoFi Stadium on October 23, 2022 in Inglewood, California. (Photo by Harry How/Getty Images)

Here’s a fine example of 4-3 starts not being equal: Seattle is one of the most pleasant surprises in the NFL and looking like a sneaky contender in a division widely expected to be decided by the two teams in California. Meanwhile, the L.A. Chargers still look like the talented underachievers they’ve been for years — even with the AFC West not shaping up to be as historically great as previously thought. 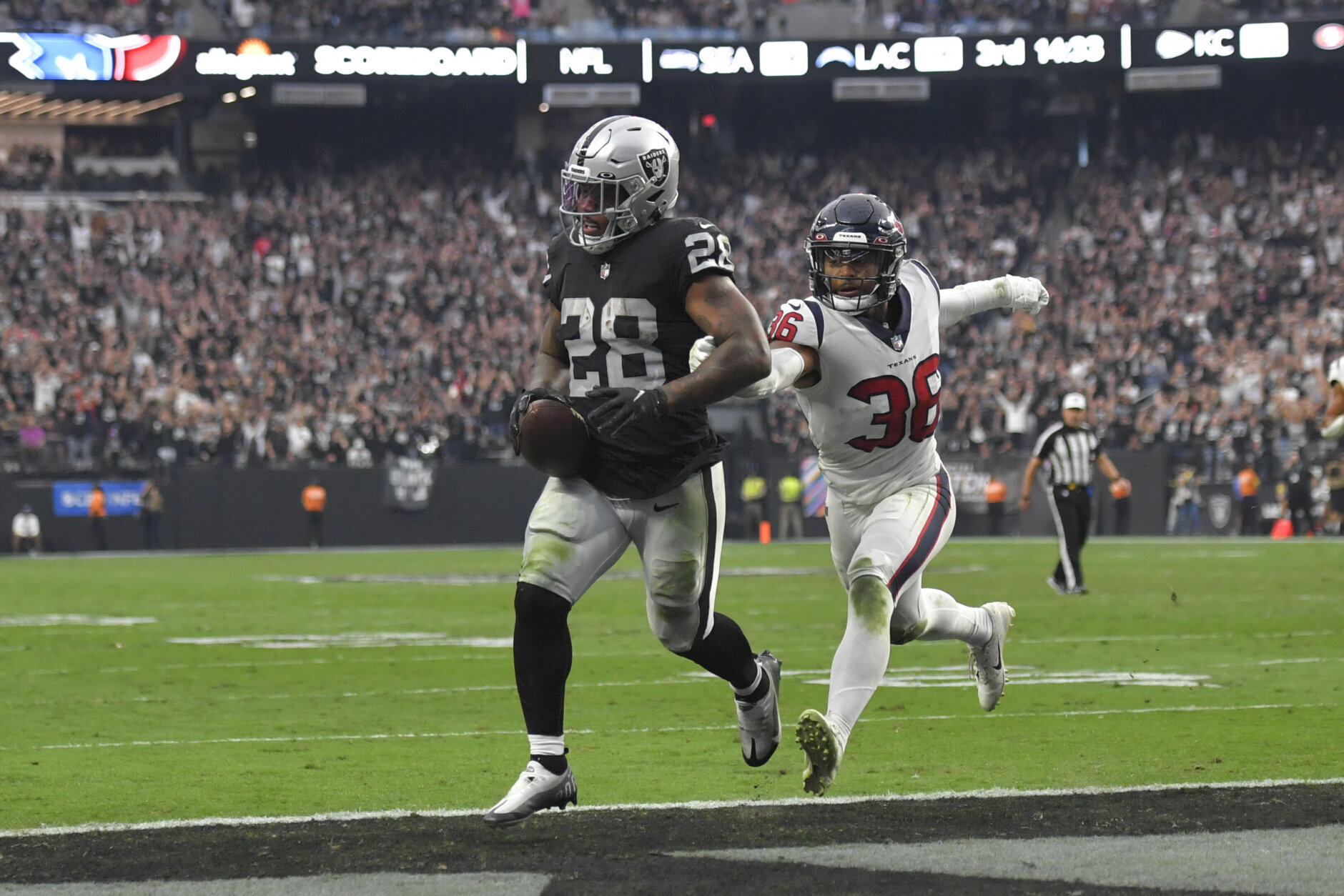 Josh Jacobs is the first Raider with three straight 100-yard rushing games since Napolean Kaufman in 1997. If Las Vegas doesn’t want to throw down a few chips to keep him, he’s going to be a nice pick up elsewhere. Put my money on Buffalo. 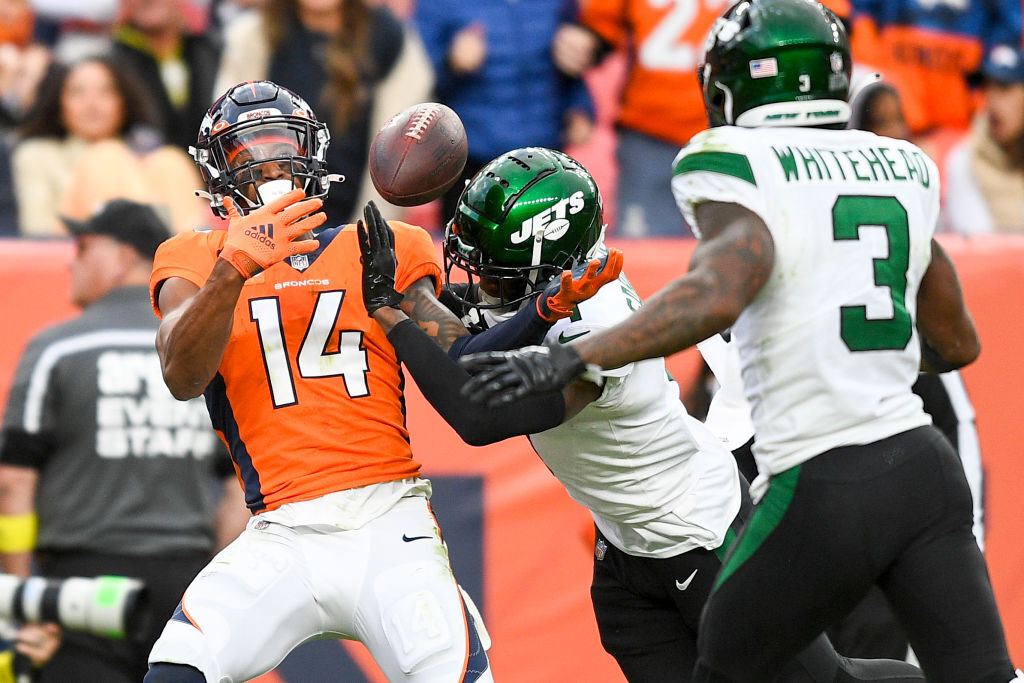 6/14
Sauce Gardner #1 of the New York Jets breaks up a pass intended for Courtland Sutton #14 of the Denver Broncos during the second half at Empower Field At Mile High on October 23, 2022 in Denver, Colorado. (Photo by Dustin Bradford/Getty Images)

No matter who plays quarterback, Denver’s offensive is historically putrid. At this point, the only question about this Broncos offense is whether Russell Wilson will finish the season with the most ridiculous stat of 2022 still intact. 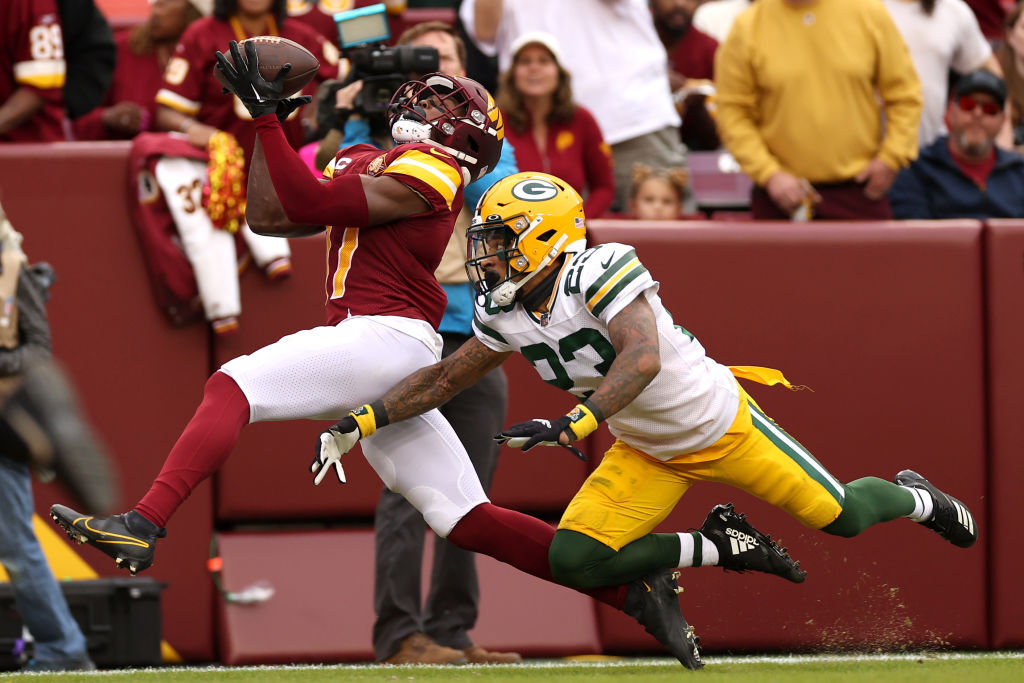 7/14
Terry McLaurin #17 of the Washington Commanders catches a touchdown pass during the third quarter of the game against the Green Bay Packers at FedExField on October 23, 2022 in Landover, Maryland. (Photo by Scott Taetsch/Getty Images)

Taylor Heinicke honored his late father by beating the team of his youth to get hella paid, the defense had the rare distinction of holding Green Bay to no third down conversions and Washington won in front of a bunch of alumni as part of the 90th anniversary celebration — but here goes Tanya Snyder dropping the old ‘R’ word as if it’s still 1983 when Mark Moseley won MVP and now can’t get his name spelled right. Even in victory, this franchise will continue to rob Washington of any joy as long as a Snyder — any Snyder, not just Dan — is at the top of its hierarchy.

Tanya Snyder: “Hail to the Redskins.” 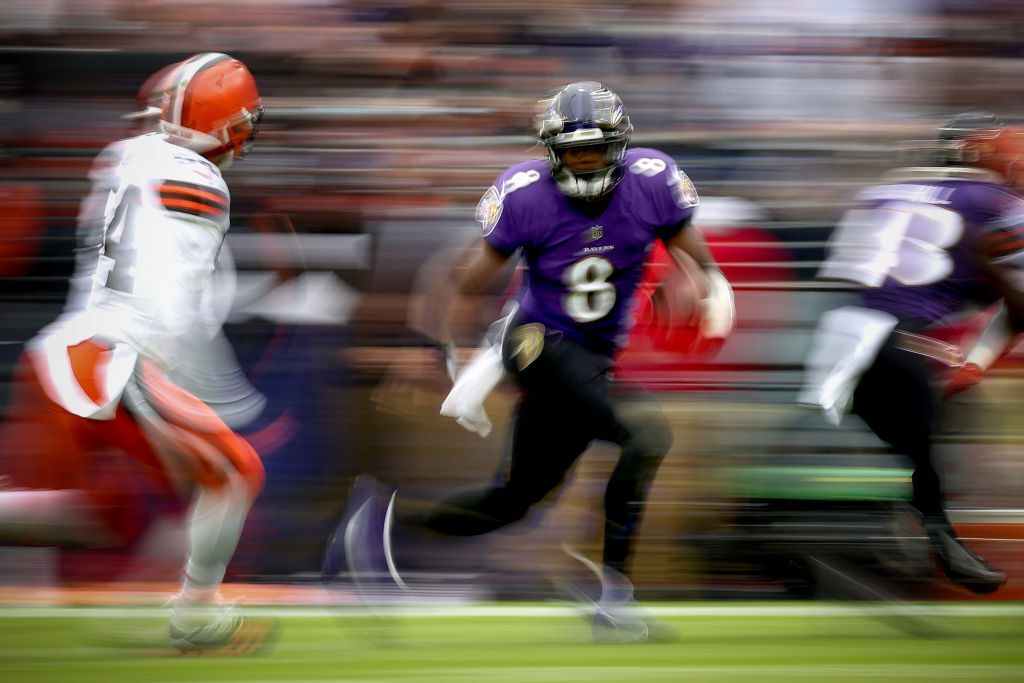 8/14
Lamar Jackson #8 of the Baltimore Ravens scrambles with the ball during the second half of the game against the Cleveland Browns at M&T Bank Stadium on October 23, 2022 in Baltimore, Maryland. (Photo by Patrick Smith/Getty Images)

Now this is what Washington used to be: Baltimore celebrated the 10th anniversary of its last Super Bowl and then went out and kept current championship aspirations alive by beating an AFC North rival to stay atop a competitive division. Things get really interesting if the Ravens can shrug off a short week to keep Tampa in a downward spiral on Thursday Night Football. 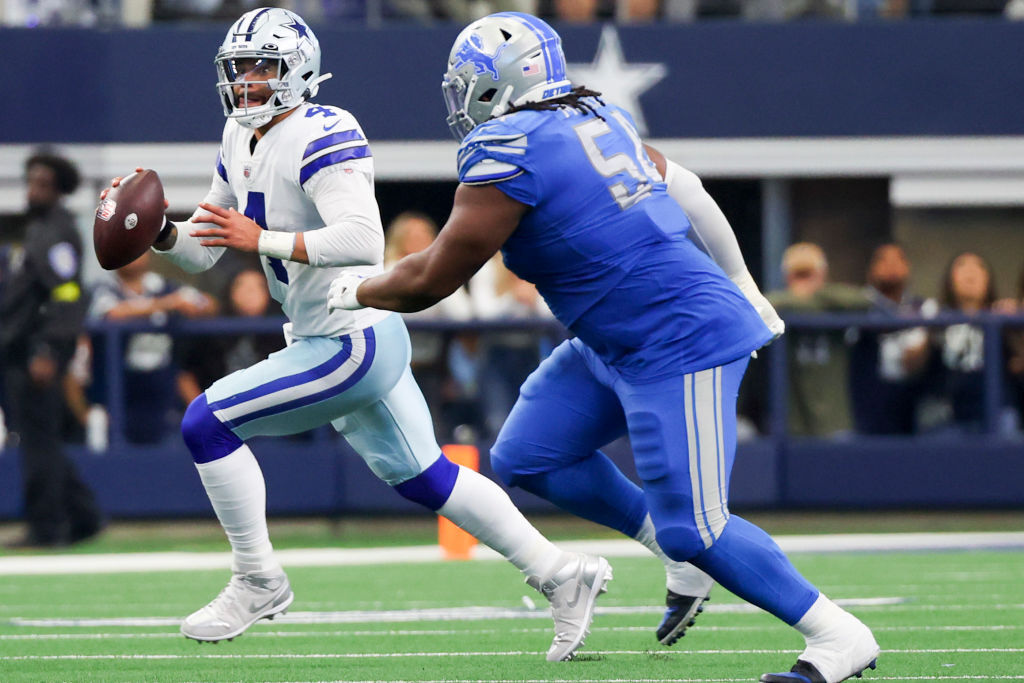 9/14
Dak Prescott #4 of the Dallas Cowboys runs with the ball while defended by Alim McNeill #54 of the Detroit Lions during the second half at AT&T Stadium on October 23, 2022 in Arlington, Texas. (Photo by Richard Rodriguez/Getty Images)

If Detroit’s response to rock bottom (coming off a bye!) is having nearly as many turnovers (five) as points against a team breaking in a rusty QB, Dan Campbell is as good as gone. 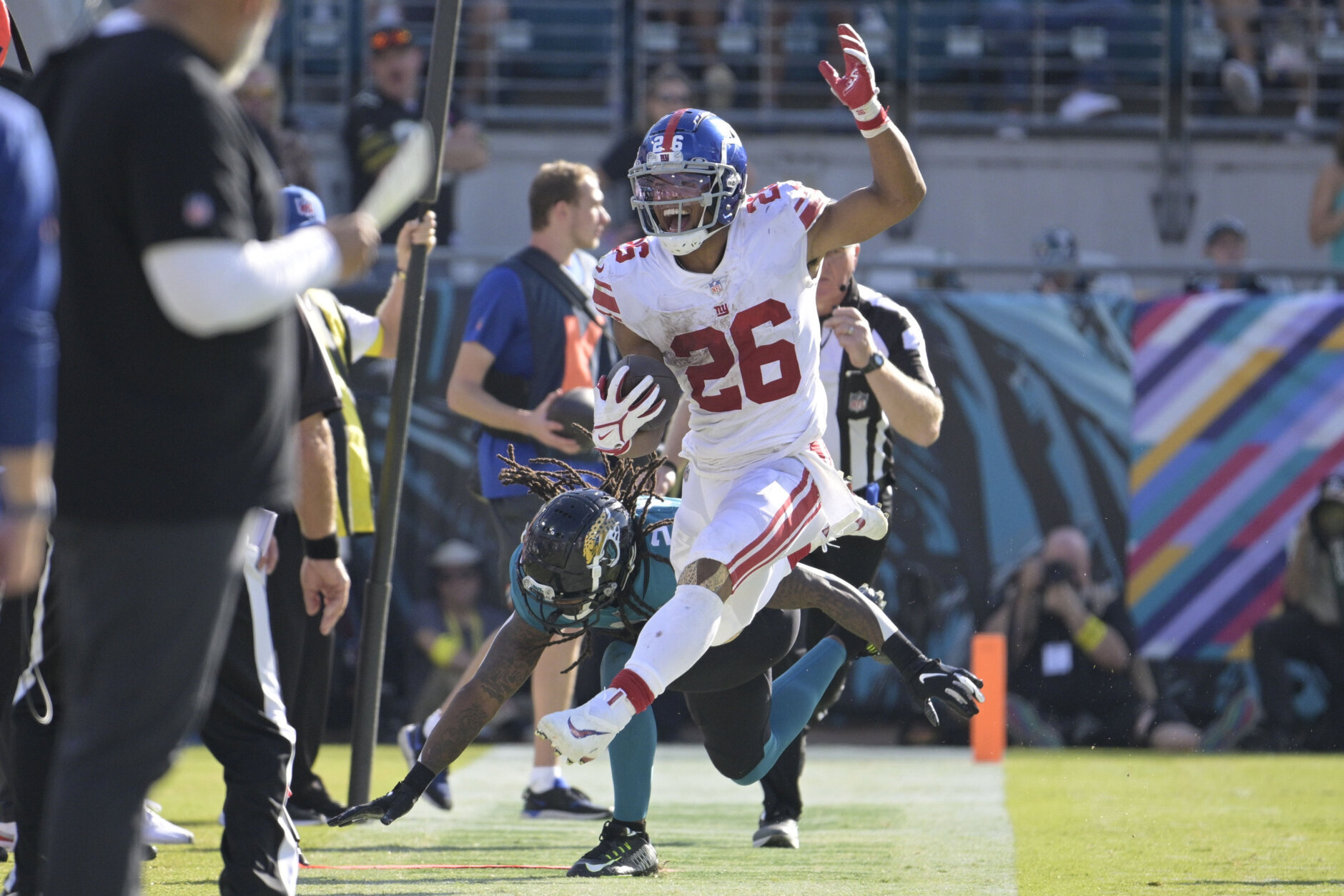 Not that beating a Jacksonville squad that’s lost 19 straight cross-division games is a big deal, Big Blue finding a way to win on the road in comeback fashion to improve to 6-1 (the Giants’ best start since 2008) shows this team just might be for real after all. 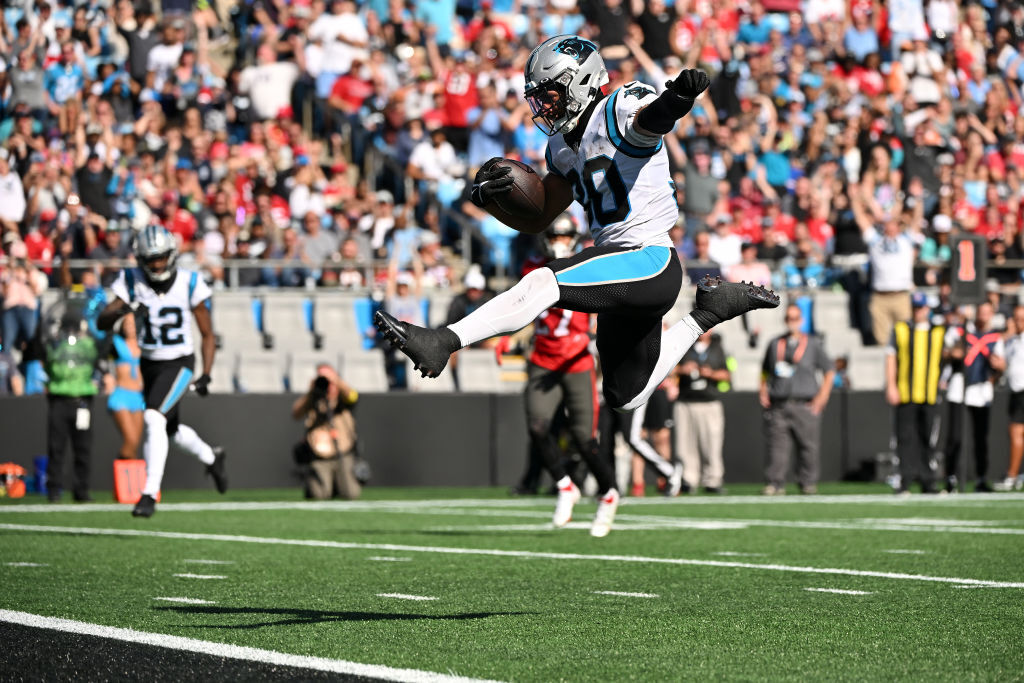 11/14
Chuba Hubbard #30 of the Carolina Panthers celebrates into the endzone to score a touchdown in the third quarter against the Tampa Bay Buccaneers at Bank of America Stadium on October 23, 2022 in Charlotte, North Carolina. (Photo by Grant Halverson/Getty Images)

Football gods indeed. We live in a world where this is true. Incredible.

I know it’s not all on Brady … but wow pic.twitter.com/NRT4G4BBQW

PJ Walker and Taylor Heinicke were members of the XFL a few years ago.

Today they both started in the NFL and won games over Tom Brady and Aaron Rodgers. 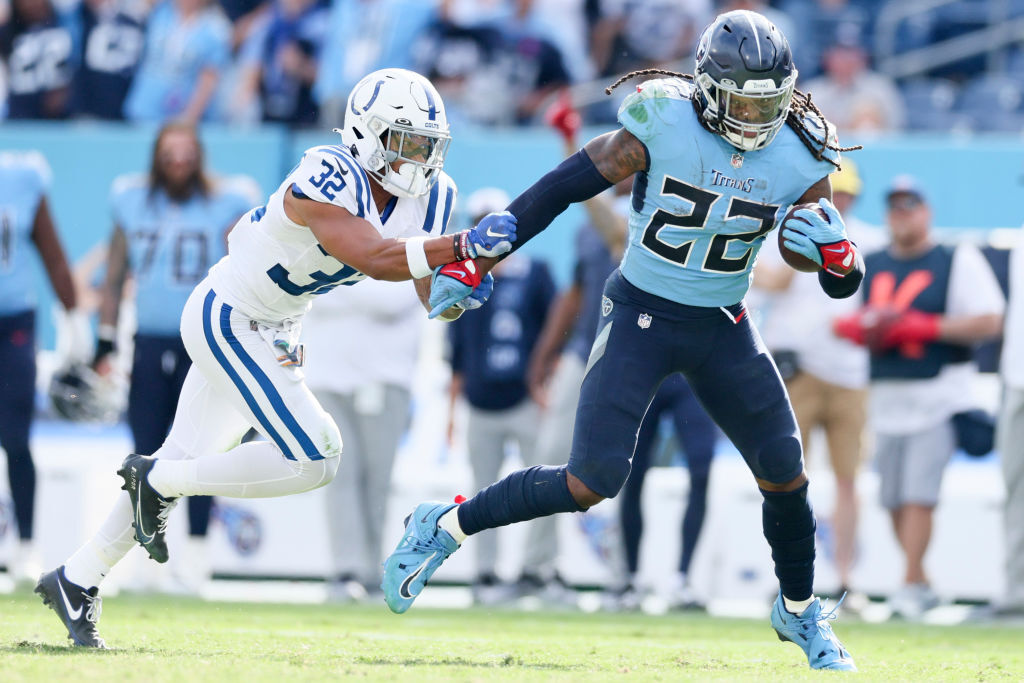 12/14
Derrick Henry #22 of the Tennessee Titans runs with the ball against Julian Blackmon #32 of the Indianapolis Colts during the second half at Nissan Stadium on October 23, 2022 in Nashville, Tennessee. (Photo by Andy Lyons/Getty Images)

Because apparently, Alumni Weekend is magic, Tennessee swept Indy for the second straight year to regain control of the division they were expected to win anyway. The Colts better throw together an Alumni Weekend next week if they want to counter Washington’s Heinicke magic. 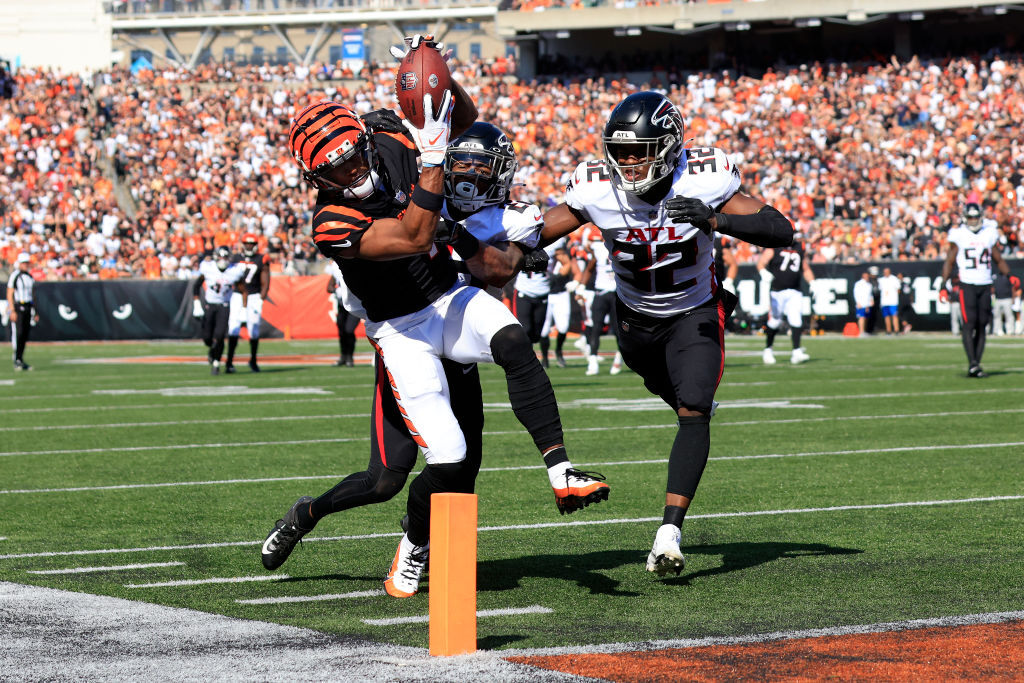 13/14
Ja’Marr Chase #1 of the Cincinnati Bengals reaches for a touchdown after making a catch while defended by Cornell Armstrong #22 (C) and Jaylinn Hawkins #32 (R) of the Atlanta Falcons during the second quarter at Paul Brown Stadium on October 23, 2022 in Cincinnati, Ohio. (Photo by Justin Casterline/Getty Images)

Just in case some of y’all really thought Atlanta was good … here you go.

The shot of the season so far pic.twitter.com/hhijvSxVGW

We could play an 18-game season and not get a better shot than this Pick 6.

Hang this gif in the damn Louvre.