The NFL Week 6 Recap is all about playing the dozens (and losing), age over beauty (and winning), and some surprise cheese Sauce. 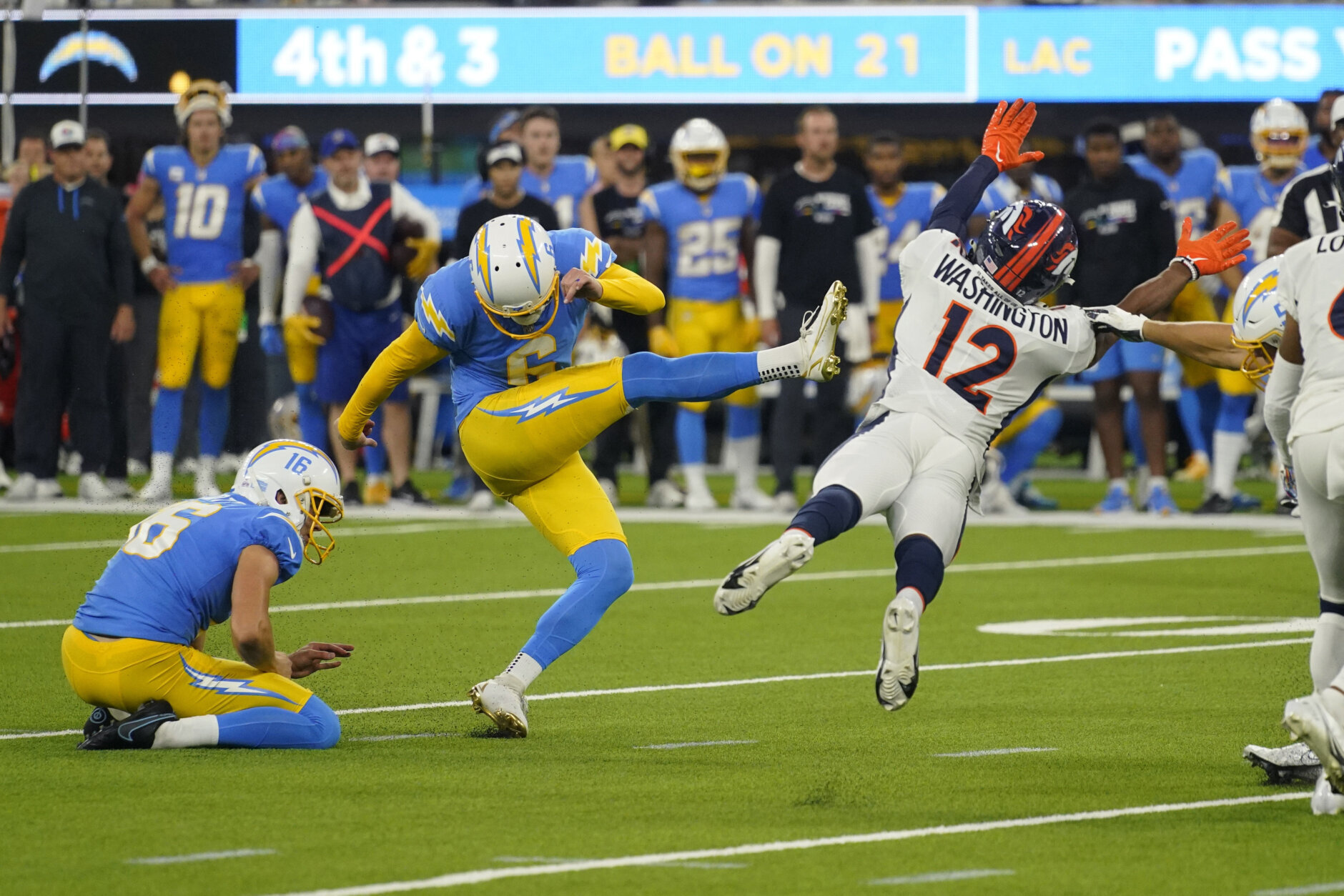 All hail Dustin Hopkins, the former Washington kicker who shrugged off a hamstring injury to make all four of his field goals — including the game-winner in overtime to save us from another minute of this eyesore. His performance, along with that of fellow Washington alum DeAndre Carter, is yet another example of the Ron Rivera regime moving on from the wrong players.

And Denver … after a primetime flop to open last week, this week they capped Week 6 with another primetime turd in which the two teams combined to commit 19 penalties totaling 240 yards (for context, the Broncos’ “franchise” QB went backwards after halftime and threw for only 188 yards). The NFL needs to alter Denver’s schedule and keep this clown car parked in the 1 p.m. Sunday slot for the rest of the season. 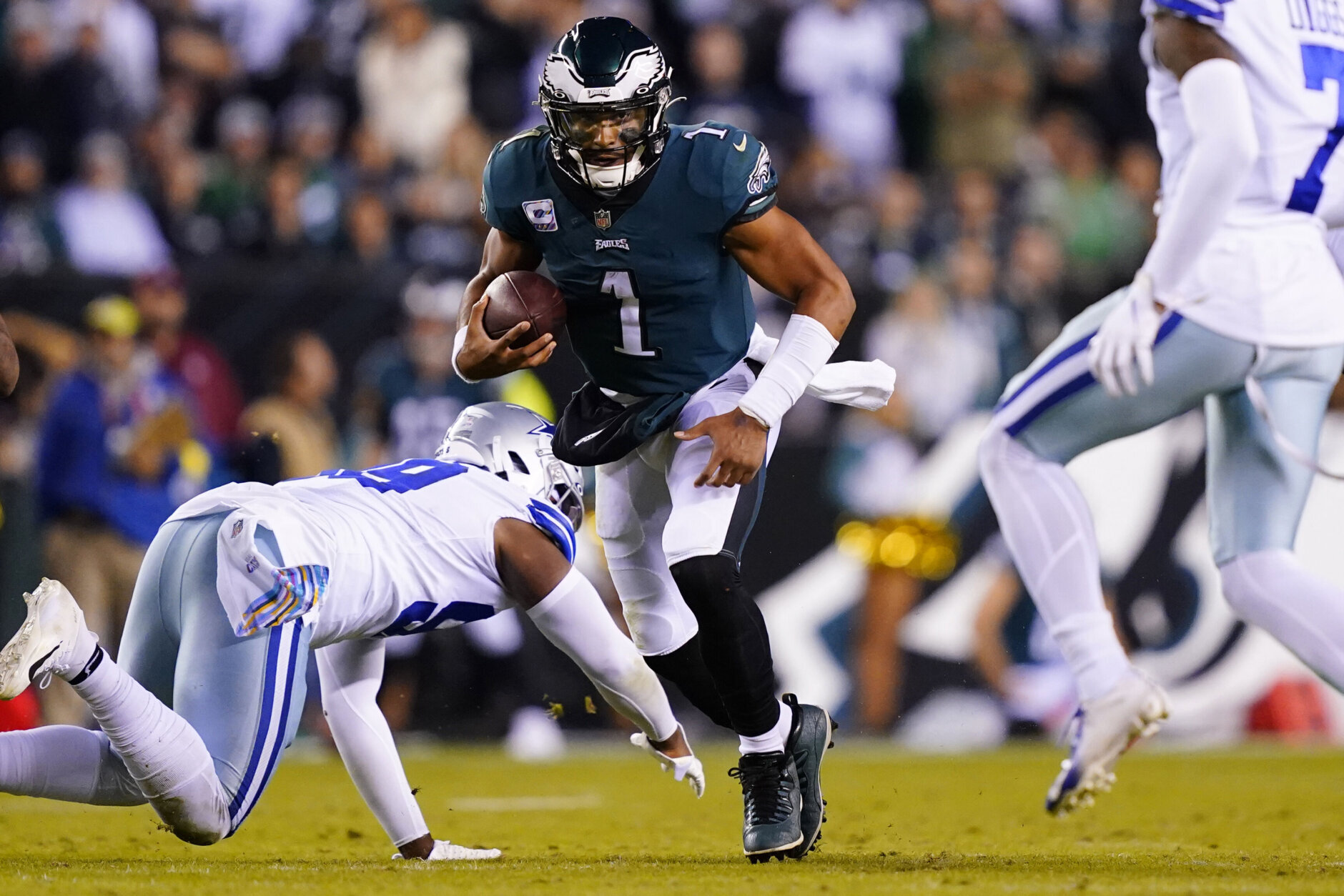 2/13
Philadelphia Eagles’ Jalen Hurts runs with the ball during the second half of an NFL football game against the Dallas Cowboys on Sunday, Oct. 16, 2022, in Philadelphia. (AP Photo/Matt Rourke)

Hurts is Philly’s third QB to start a season 6-0, joining Ron Jaworski and Donovan McNabb — both of whom reached Super Bowls. It’s starting to look like Hurts will do the same.

And you see why Cooper Rush is a backup. Dallas is still Dak’s team. 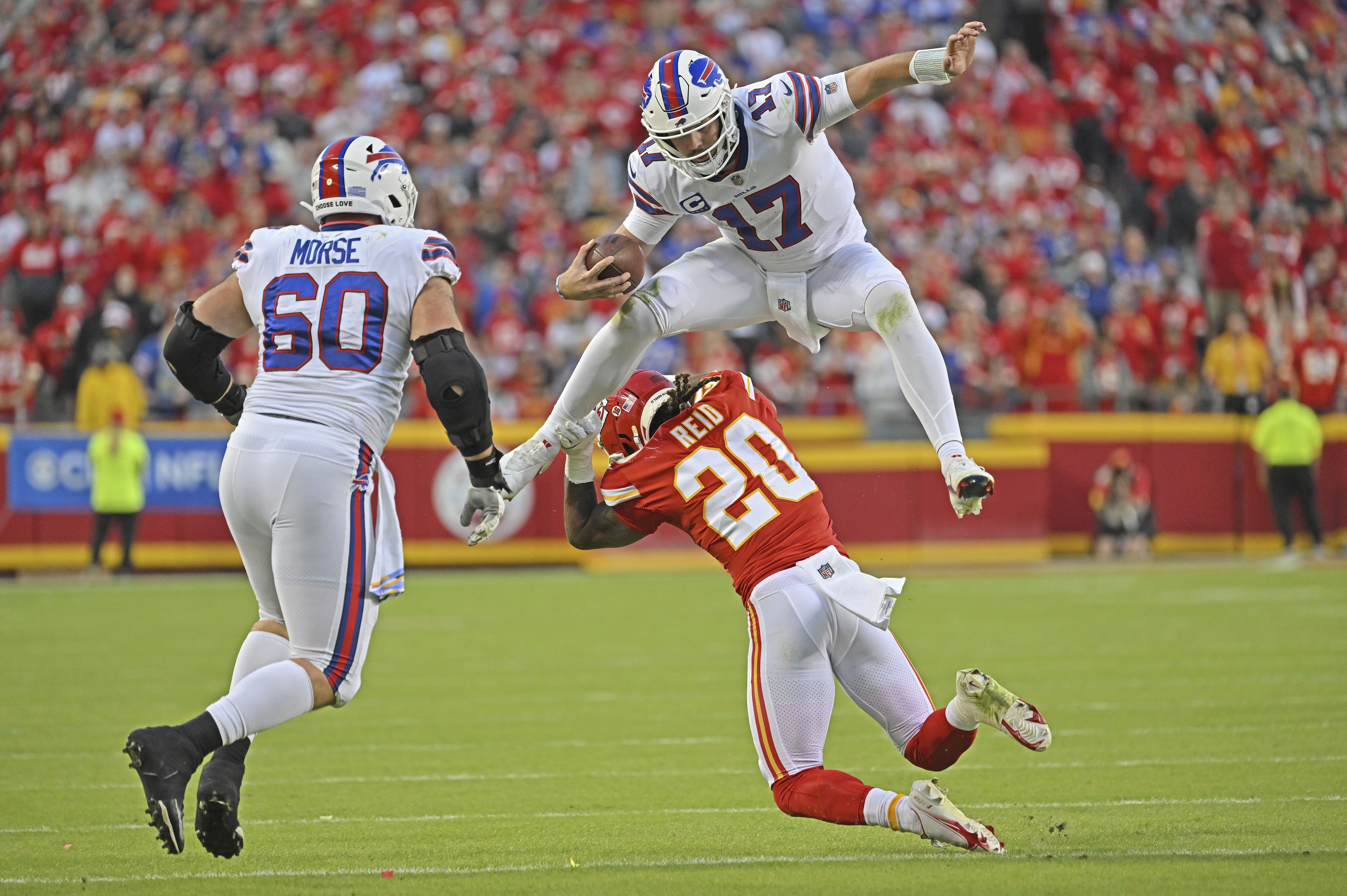 In what has been a ridiculously even matchup, Josh Allen outdueled Patrick Mahomes and became the first to do so twice at Arrowhead Stadium. Buffalo seized a much-needed win — both for their confidence and their ability to force the road to the Super Bowl to come through Western New York. This result matters more than any other in Week 6. 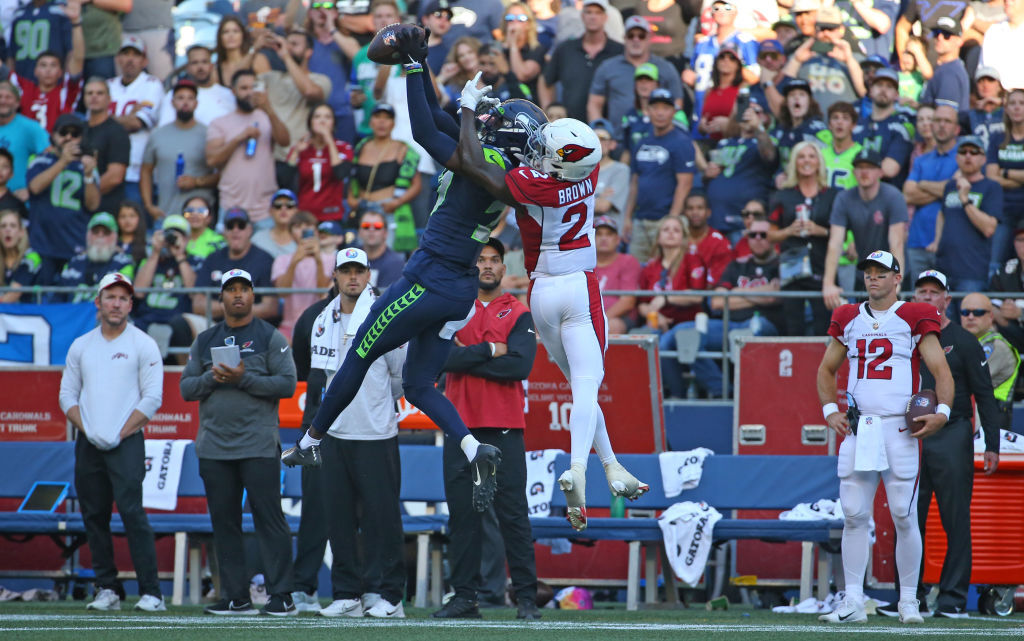 4/13
SEATTLE, WASHINGTON – OCTOBER 16: Tariq Woolen #27 of the Seattle Seahawks intercepts a pass intended for Marquise Brown #2 of the Arizona Cardinals during the fourth quarter at Lumen Field on October 16, 2022 in Seattle, Washington. (Photo by Lindsey Wasson/Getty Images)

Tariq Woolen has four interceptions in his first six NFL games. Kenneth Walker III is mauling people on the ground. Nobody rebuilds like Seattle. 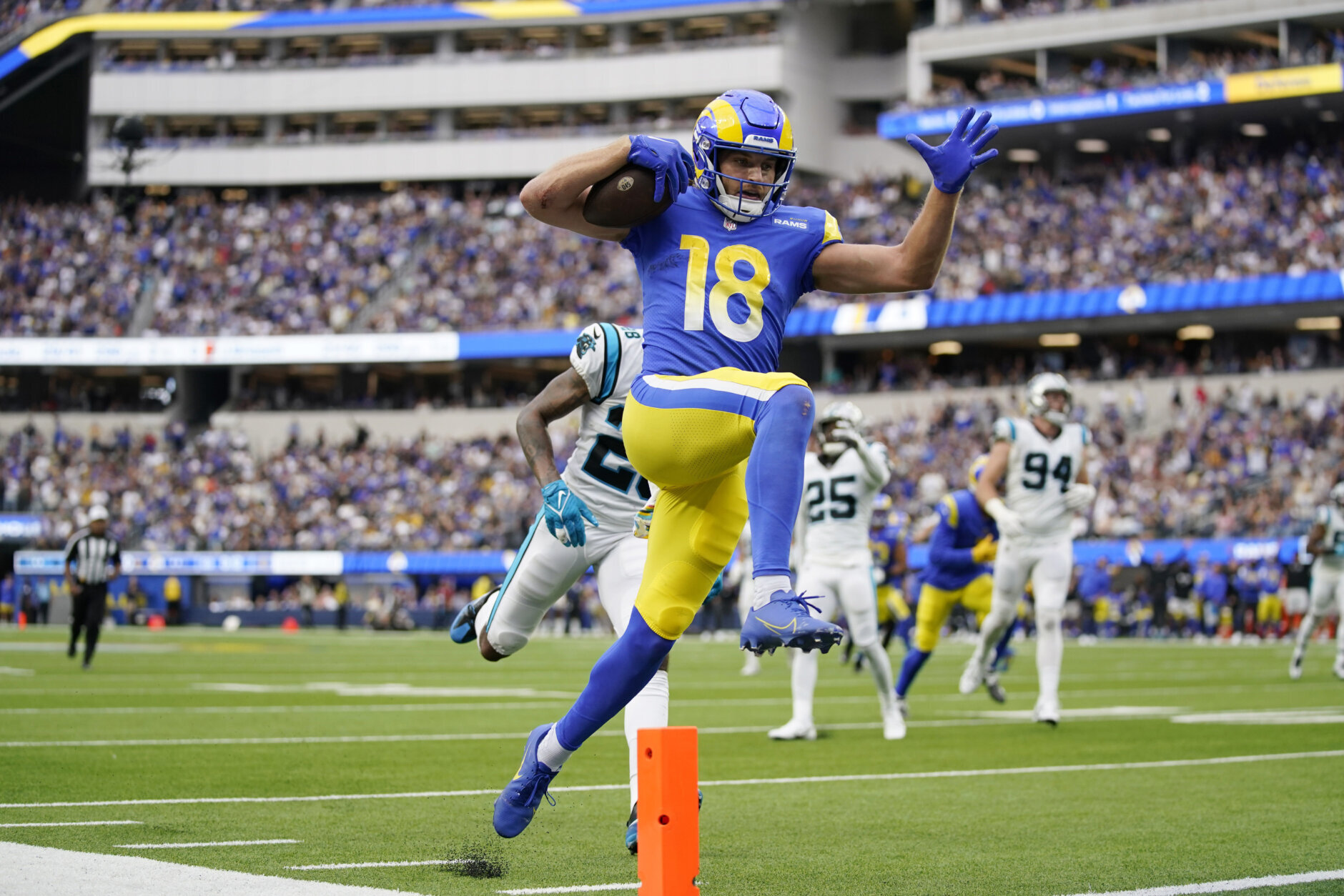 Look, Matt Rhule absolutely had to go (and probably never should have been hired, to be honest), but all I can see here is yet another example of an organization rolling out a Black interim coach to bail it out of a bad spot and ruin his chances of getting another head coaching job for real. This feeling was confirmed the minute I saw Robbie Anderson’s shenanigans.

Here’s the video of Robbie Anderson getting in the face of Joe Dailey. pic.twitter.com/TR9agsvaFr 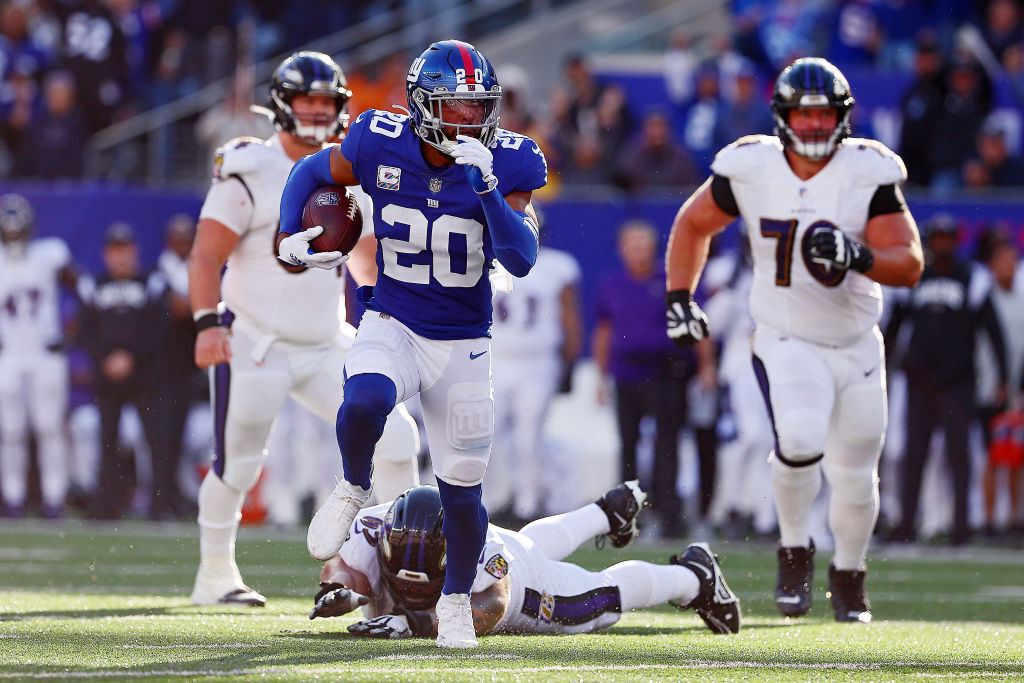 6/13
EAST RUTHERFORD, NEW JERSEY – OCTOBER 16: Julian Love #20 of the New York Giants runs the ball after recovering it during the second half against the Baltimore Ravens at MetLife Stadium on October 16, 2022 in East Rutherford, New Jersey. (Photo by Elsa/Getty Images)

The only thing worse than this camera angle is Baltimore’s late-game execution this season. Though usually the fault of the defense — all three losses were blown double-digit, fourth-quarter leads — this time Lamar Jackson got in on the act with a late-game pick that spoiled his own 12-0 record against NFC foes. The Ravens could easily be 6-0 but this 3-3 disappointment might just be who they are in 2022.

Meanwhile, this is definitely who the Giants are in 2022, outscoring their opponents 78-32 in the second half of their five wins this season. Brian Daboll should be the cinch Coach of the Year. 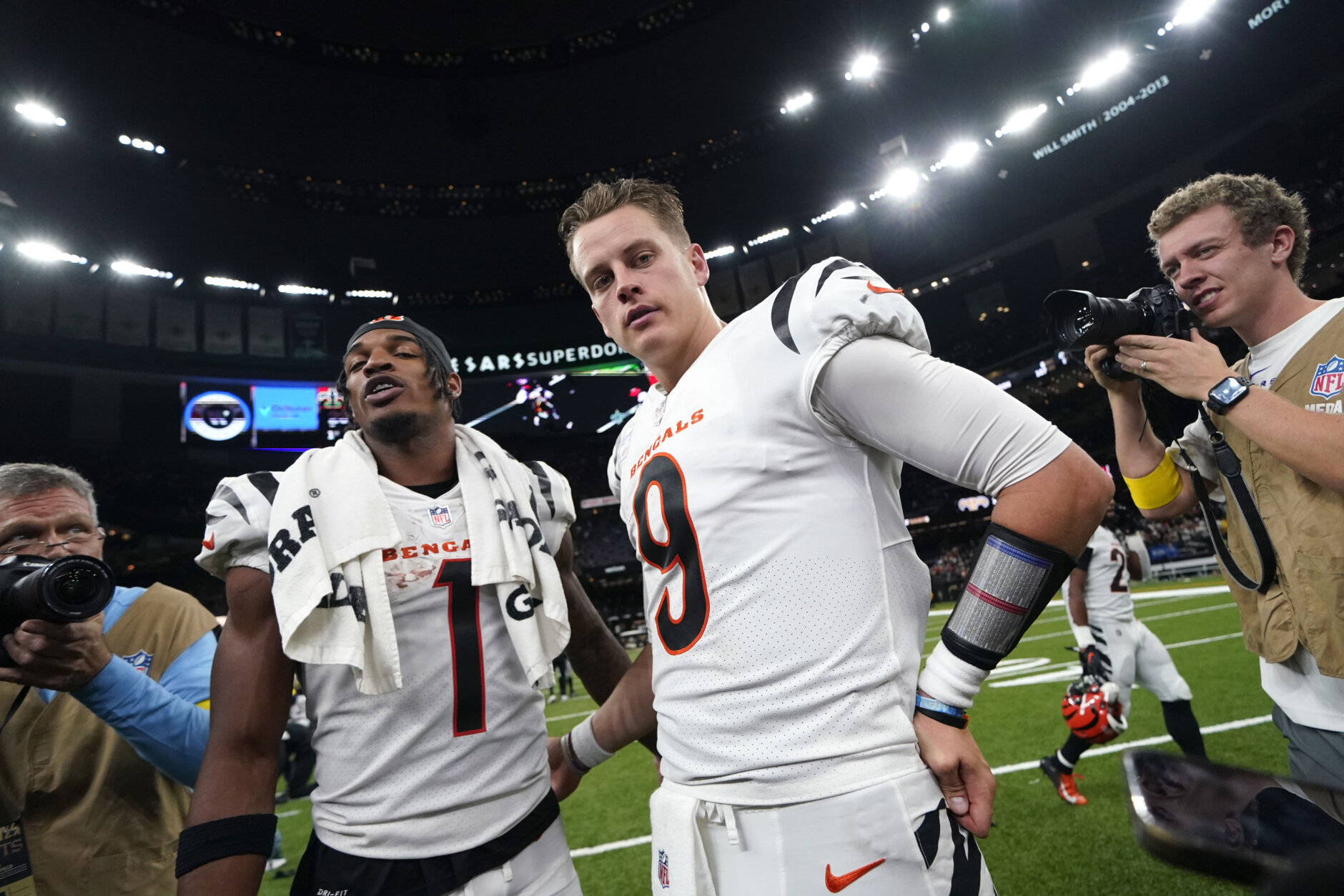 Of course the Bayou Boys (former LSU greats Joe Burrow and Ja’Marr Chase) teamed up to hand former Bengal Andy Dalton the ‘L’ that could cost him his last, best chance to be a starting QB. 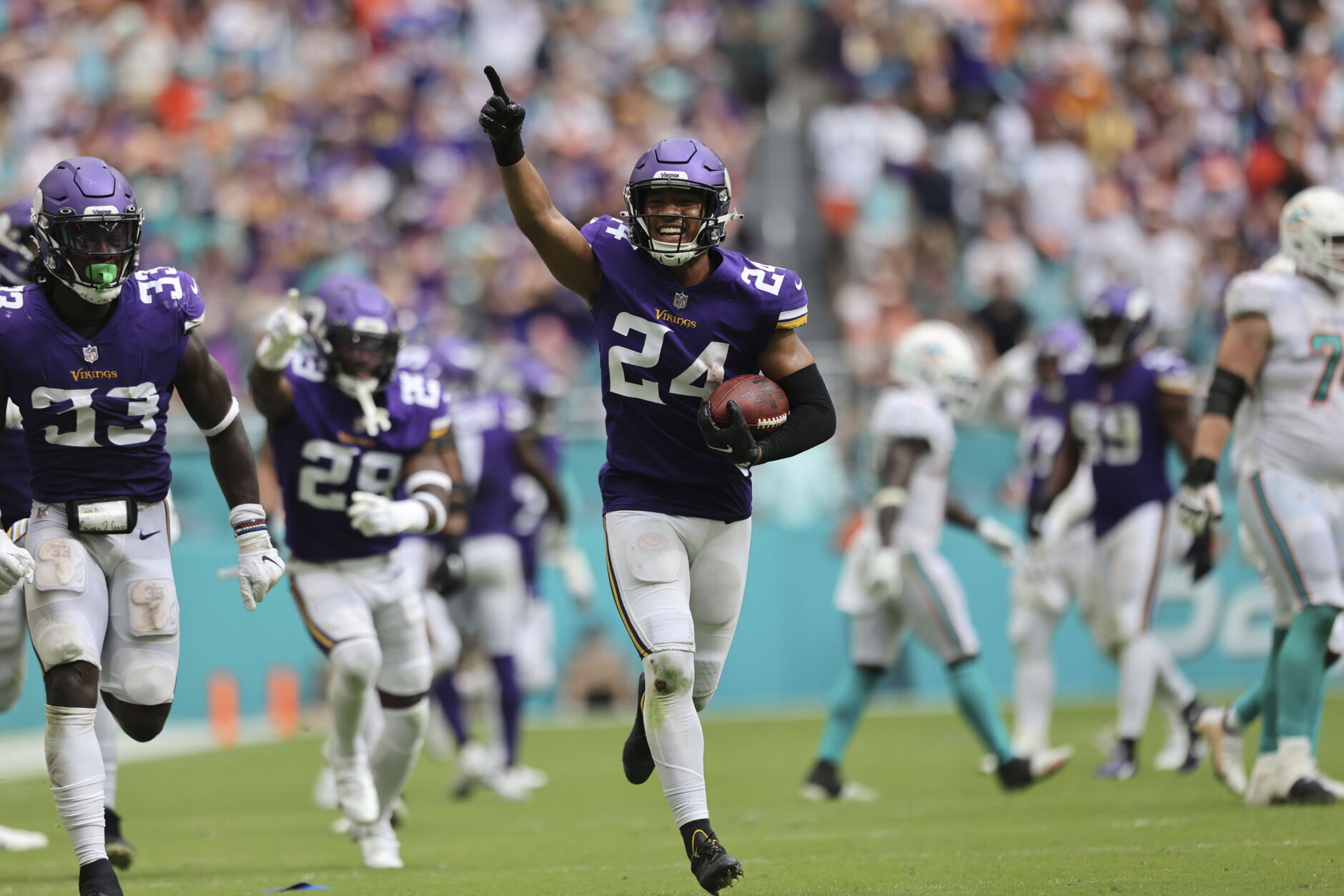 Props to Minnesota for beating the heat and starting 5-1 — but this has to be the softest 5-1 start I’ve ever seen. The Vikings’ schedule sets them up to win the NFC North, and maybe even have a gaudy record, but I can’t take this team seriously unless and until they can beat the likes of the Bills and Cowboys in November. 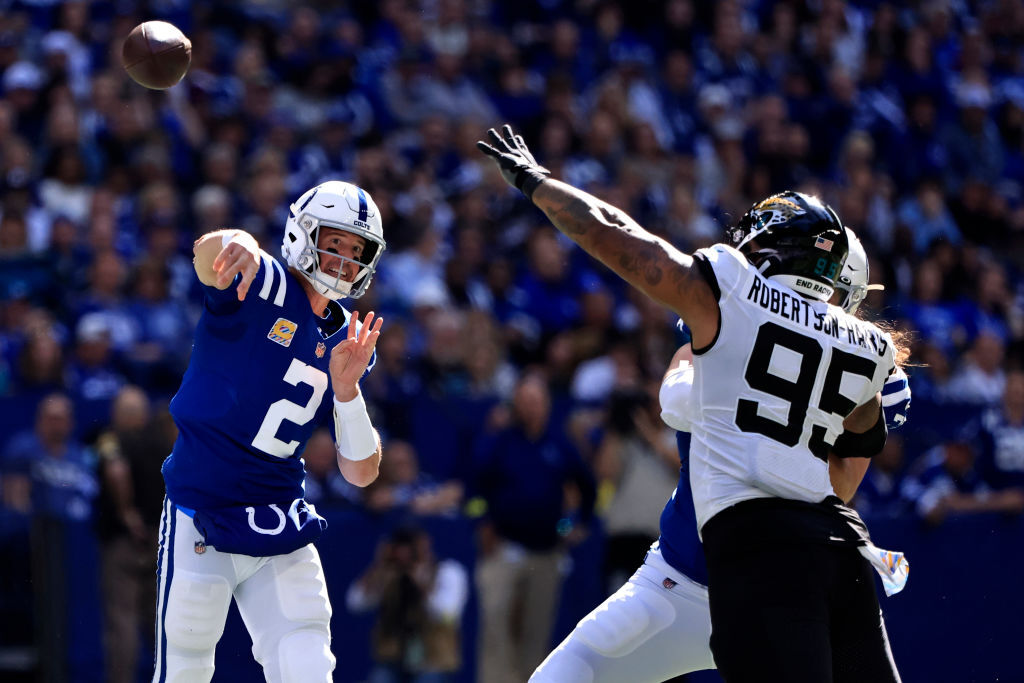 9/13
INDIANAPOLIS, INDIANA – OCTOBER 16: Matt Ryan #2 of the Indianapolis Colts passes against the Jacksonville Jaguars during the second quarter at Lucas Oil Stadium on October 16, 2022 in Indianapolis, Indiana. (Photo by Justin Casterline/Getty Images)

Indy put it all on old man Matt Ryan and he delivered with a franchise-record 42 completions to lead the Colts back into the thick of the AFC South division race. Jacksonville showed they’re probably not quite ready for that race. 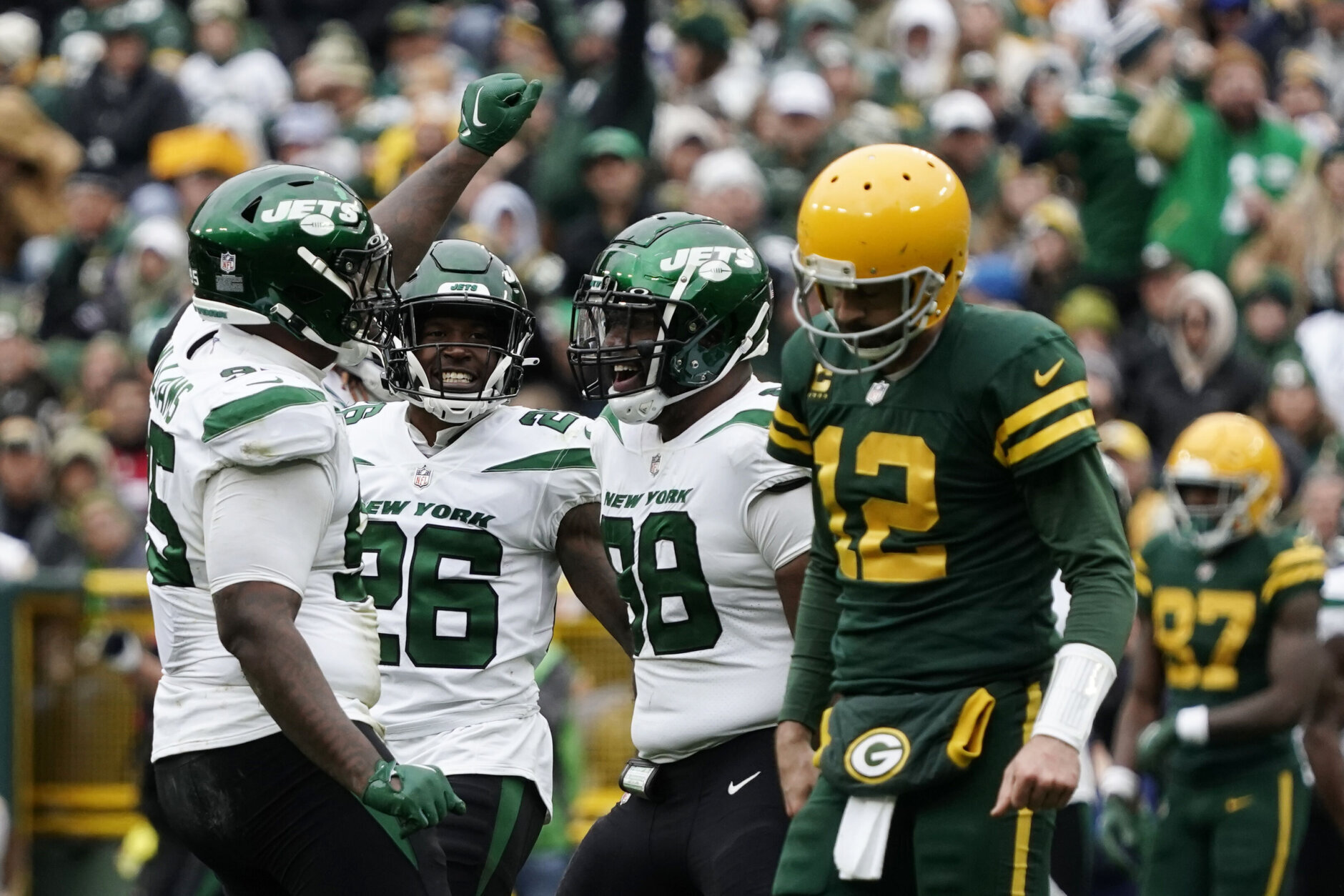 One could make the case Green Bay spoke this loss into existence but the Packers are off to their worst start since 2012 because they’re a team in dire need of a rebuild that can’t happen while Aaron Rodgers is holding them hostage. Weird as it is to say, Green Bay will regret re-signing Rodgers to that lucrative extension. 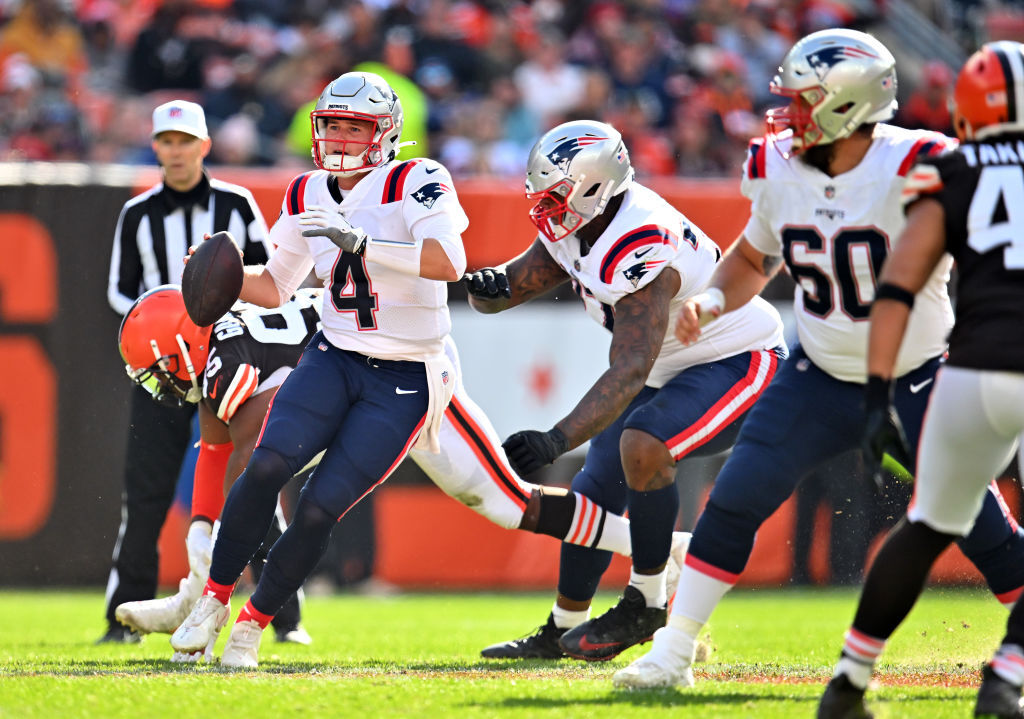 11/13
CLEVELAND, OHIO – OCTOBER 16: Bailey Zappe #4 of the New England Patriots attempts a pass during the fourth quarter against the Cleveland Browns at FirstEnergy Stadium on October 16, 2022 in Cleveland, Ohio. (Photo by Jason Miller/Getty Images)

Did the Patriots really just fall into the next Tom Brady?

Bailey Zappe is the first rookie QB in the Super Bowl era to win and post a 100+ passer rating in each of his first two starts (Washington fans should be pleased to know the last player to do that was Sonny Jurgensen in 1957). Mac Jones ain’t getting his job back.

Also, New England’s victory tied Bill Belichick with George Halas for the second-most wins all-time by a head coach — and he can surpass Papa Bear Halas … next week against the Bears on Monday Night Football against a team that’s lost nine straight prime-time games. Some stories just write themselves. 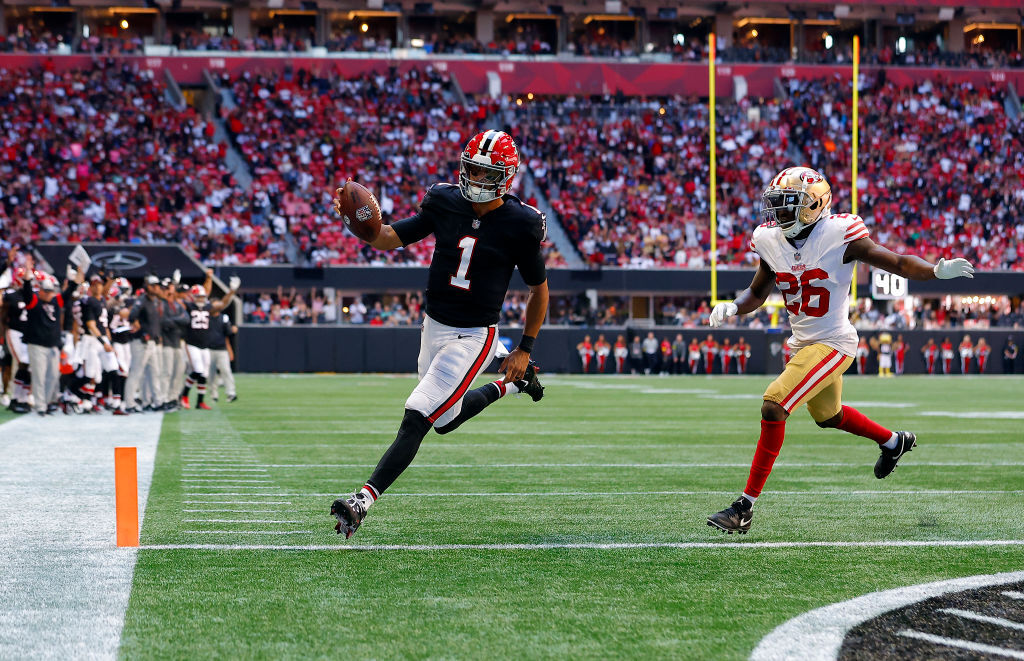 12/13
ATLANTA, GEORGIA – OCTOBER 16: Marcus Mariota #1 of the Atlanta Falcons runs past Samuel Womack III #26 of the San Francisco 49ers while scoring a touchdown during the second quarter at Mercedes-Benz Stadium on October 16, 2022 in Atlanta, Georgia. (Photo by Todd Kirkland/Getty Images)

So much for happy returns — Kyle Shanahan’s first game back in Atlanta saw his top-ranked defense lit up by Marcus Mariota in a statement win for the former No. 2 overall pick. In a wide-open division, a Mariota resurgence might have the Falcons doing the Dirty Bird on the way to the postseason. 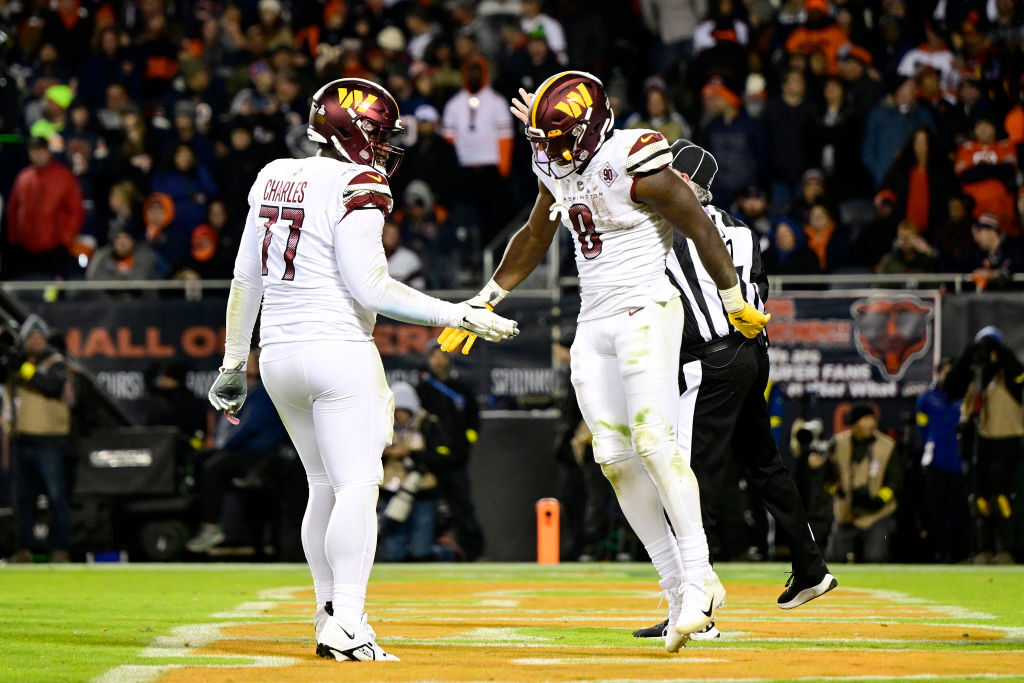 13/13
CHICAGO, ILLINOIS – OCTOBER 13: Saahdiq Charles #77 and Brian Robinson #8 of the Washington Commanders celebrate after a touchdown during the fourth quarter against the Chicago Bears at Soldier Field on October 13, 2022 in Chicago, Illinois. (Photo by Quinn Harris/Getty Images)

Carson Wentz may have a sterling record on Thursdays but Washington’s long, no-good-very-bad day was capped by Tress Way punting for more than three times as many yards (307) as Wentz threw for (99) in what amounts to a pyrrhic “not loss” (I can’t in good conscience call this a win). Even if the Commanders get on a run — and it’s certainly possible if Wentz stays sidelined — this season feels soooo over.