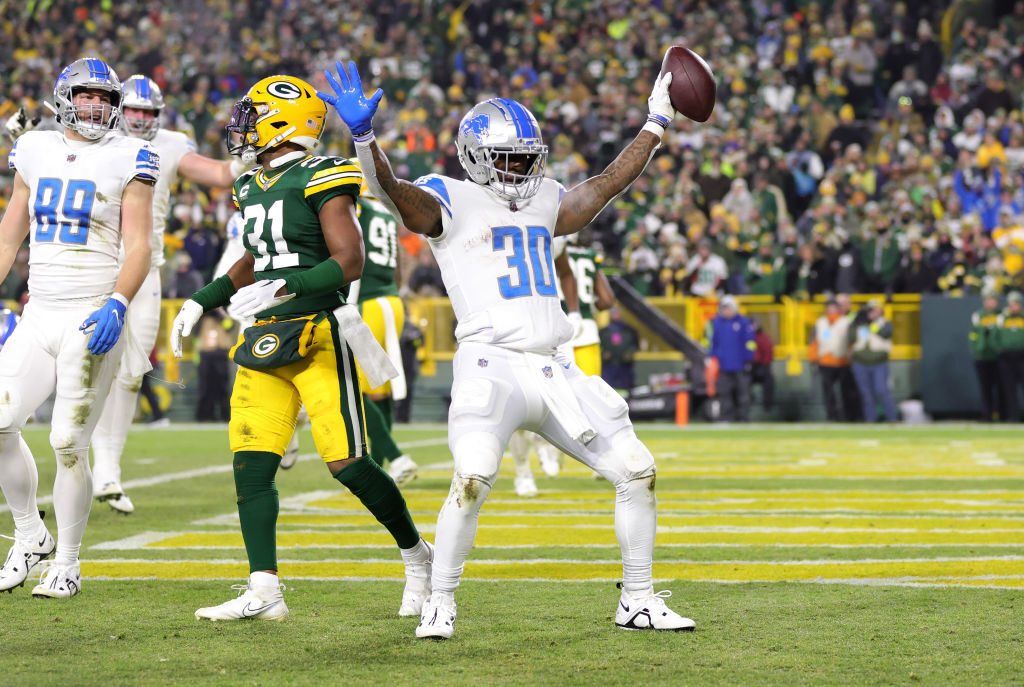 1/16
GREEN BAY, WISCONSIN – JANUARY 08: Jamaal Williams #30 of the Detroit Lions celebrates with teammates after a touchdown during the third quarter against the Green Bay Packers at Lambeau Field on January 08, 2023 in Green Bay, Wisconsin. (Photo by Stacy Revere/Getty Images)

Aiden Hutchinson’s historic rookie season fell a half-sack shy of a double-digit campaign but his two-sack night helped Detroit play spoiler in Green Bay. If the Lions can get Hutch some help on defense and get my new favorite player Jamaal Williams more touches, this franchise won’t come up short of the playoffs in 2023.

As for Green Bay — BWAHAHAHAHAHA! Aaron Rodgers and his idiot teammates deserve every piece of this season-ending gut punch. 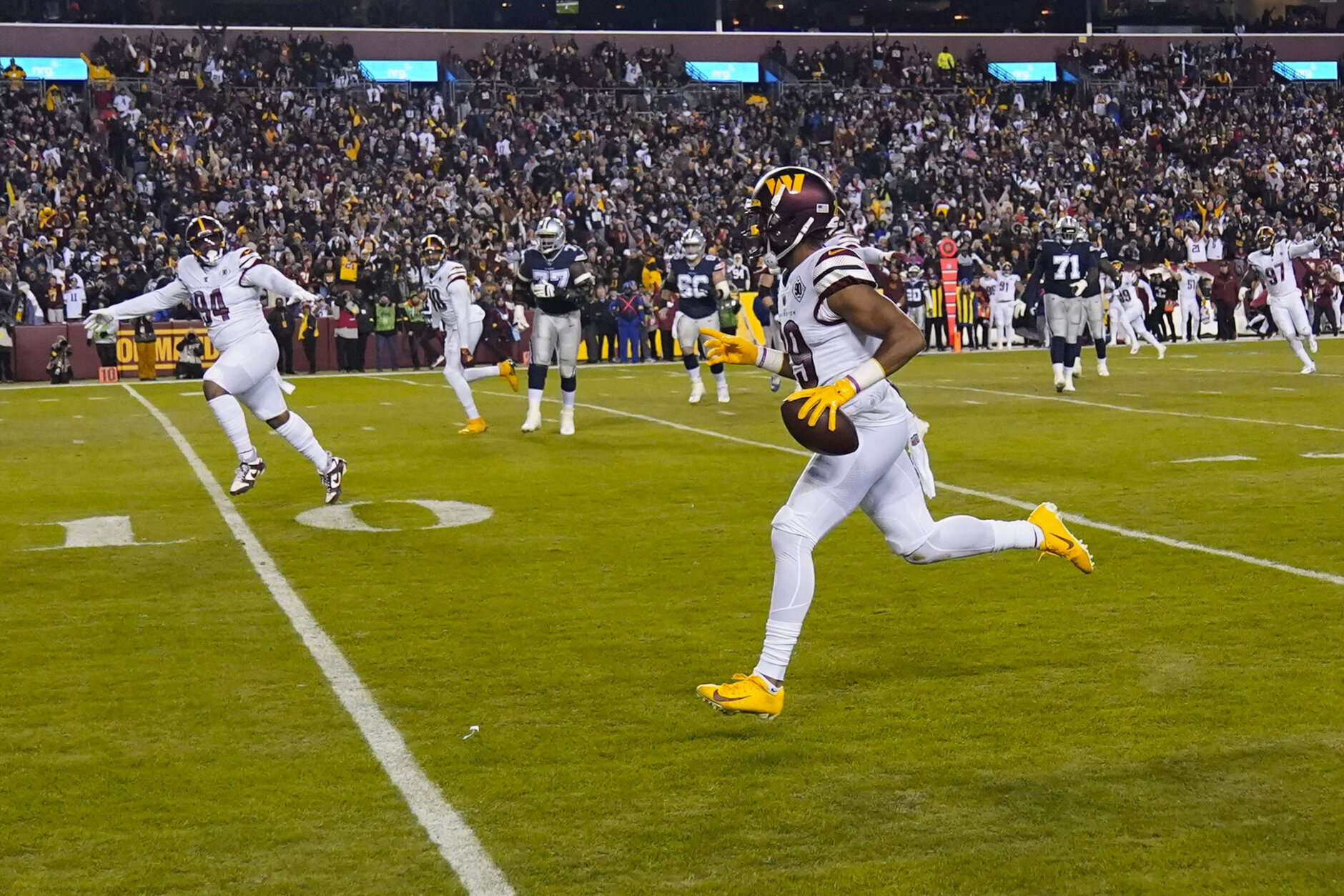 2/16
Washington Commanders cornerback Kendall Fuller (29) running towards the end zone to score a touch down after his interception against the Dallas Cowboys during the first half an NFL football game, Sunday, Jan. 8, 2023, in Landover, Md. (AP Photo/Alex Brandon)

Taylor Heinicke’s jersey choice was appropriate because what was left of Washington’s roster pulled off the upset of Week 18 with its most impressive performance of the season. Sam Howell may or may not be the long-term answer at quarterback but he showed why he should be the only one currently on the roster to return in 2023.

Dallas’ second-ranked scoring offense matched an NFL-high with 10 three-and-out drives and was actually outscored by Washington’s injury-riddled defense (7-6, thanks to local product Kendall Fuller’s Pick 6). Expect the Bucs to blow out the Cowboys in a battle of disappointing teams. 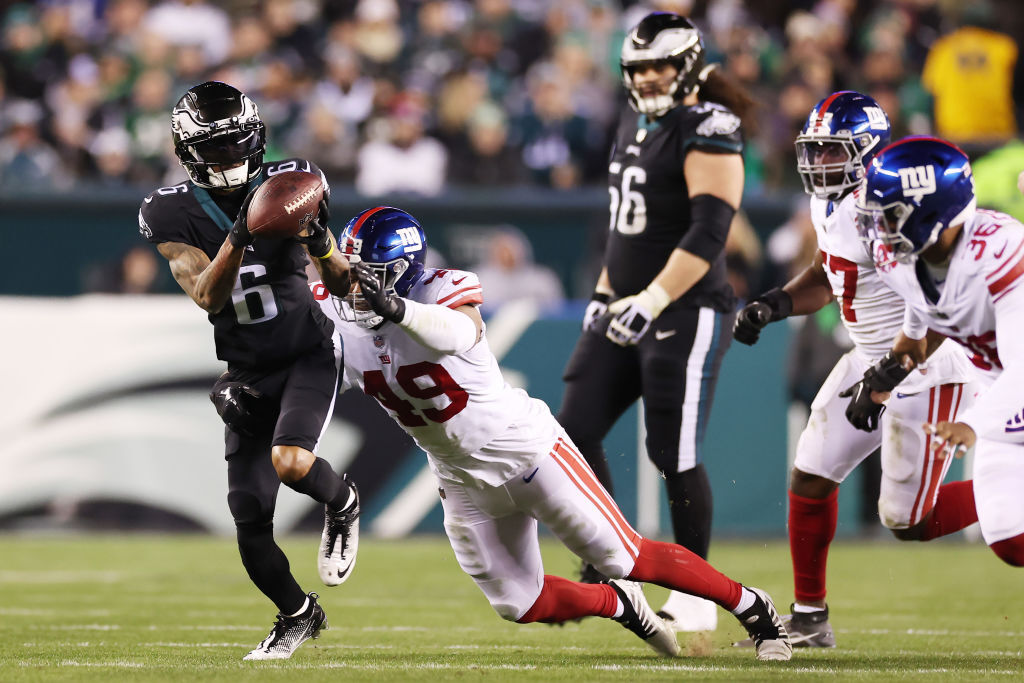 3/16
PHILADELPHIA, PENNSYLVANIA – JANUARY 08: DeVonta Smith #6 of the Philadelphia Eagles catches a pass in front of Tomon Fox #49 of the New York Giants during the third quarter at Lincoln Financial Field on January 08, 2023 in Philadelphia, Pennsylvania. (Photo by Tim Nwachukwu/Getty Images)

Philadelphia barely held on to victory at home against a Giants team sitting out damn near every one of their players that mattered. This should be worrisome for Eagles fans dreaming of another Super Bowl run and a vote of confidence for Big Blue fans eyeing a repeat of their last postseason trip to Minnesota.

JJ WATT WITH 2 SACKS IN HIS FINAL CAREER GAME 👑 pic.twitter.com/trKZzPLTuM

J.J. Watt closing out his first-ballot Hall of Fame career with two sacks in a loss is sadly apropos for a career in which he was singularly great for a lot of bad teams. I wish he would have taken better advantage of his free agency two years ago and signed with either the Ravens or his hometown Packers instead of wasting his final two seasons on a bad organization like Arizona.

San Francisco is the team to beat the NFC. Period. Brock Purdy is dealing and that defense is as ferocious as it gets. Nobody wants to see the 49ers this postseason. 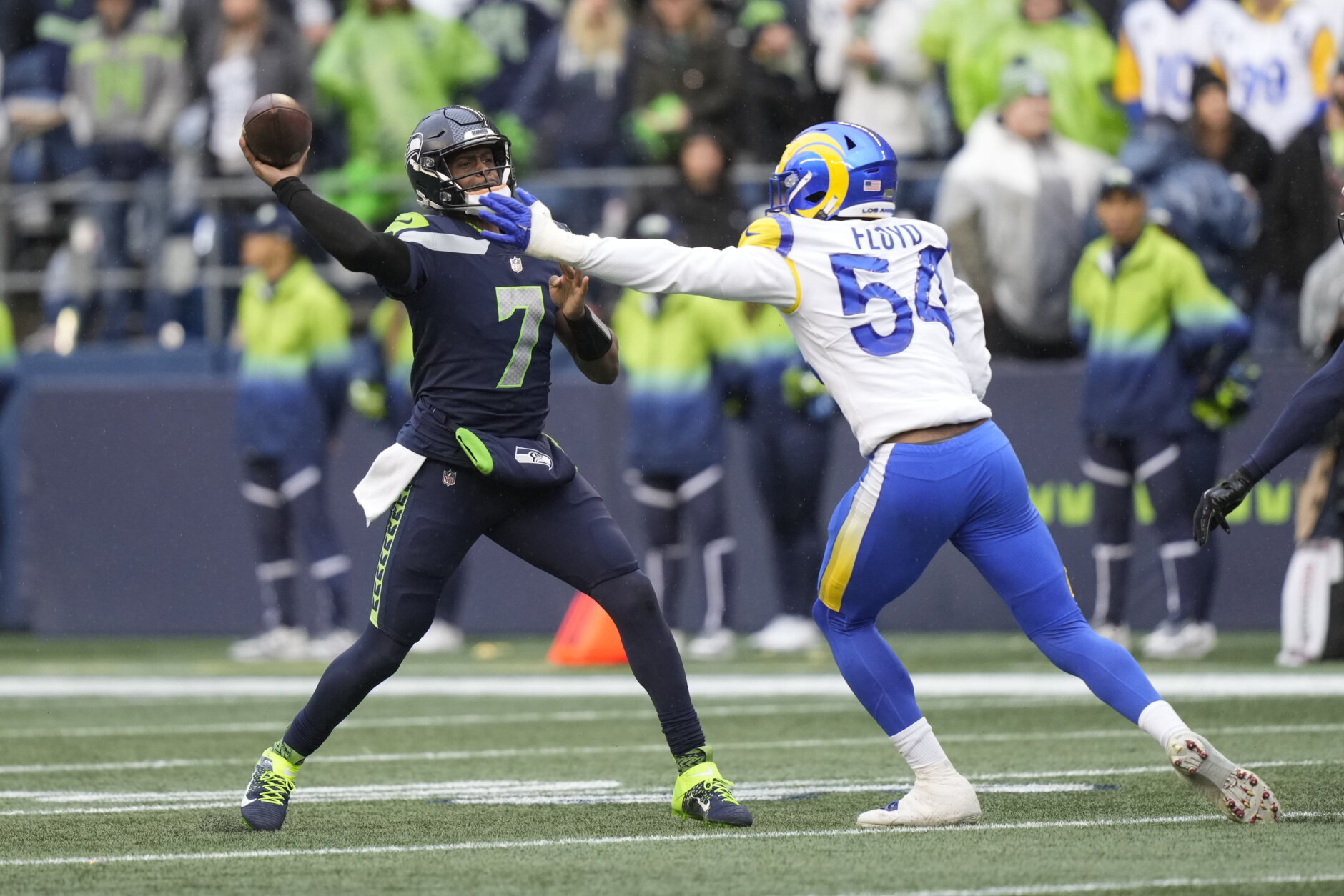 Seattle making the playoffs by the slimmest of margins is just icing on a delicious 2022 season cake: Geno Smith broke the Seahawks’ franchise passing record to further drive a stake in Denver’s heart after an all-time fleecing in the Russell Wilson trade that sets Seattle up with a draft pick high enough to select their QB of the future while AND enjoy top-shelf play from capable caretaker in Smith. The impact of this trade figures to be seismic.

Meanwhile, Sean McVay’s professional failure might lead him to walk away from coaching to take it easy in a broadcast booth for a while (if not permanently, a la John Madden once upon a time). McVay will likely be good in either role but it’s pretty interesting that a 36-year-old coach seems to already be burned out. 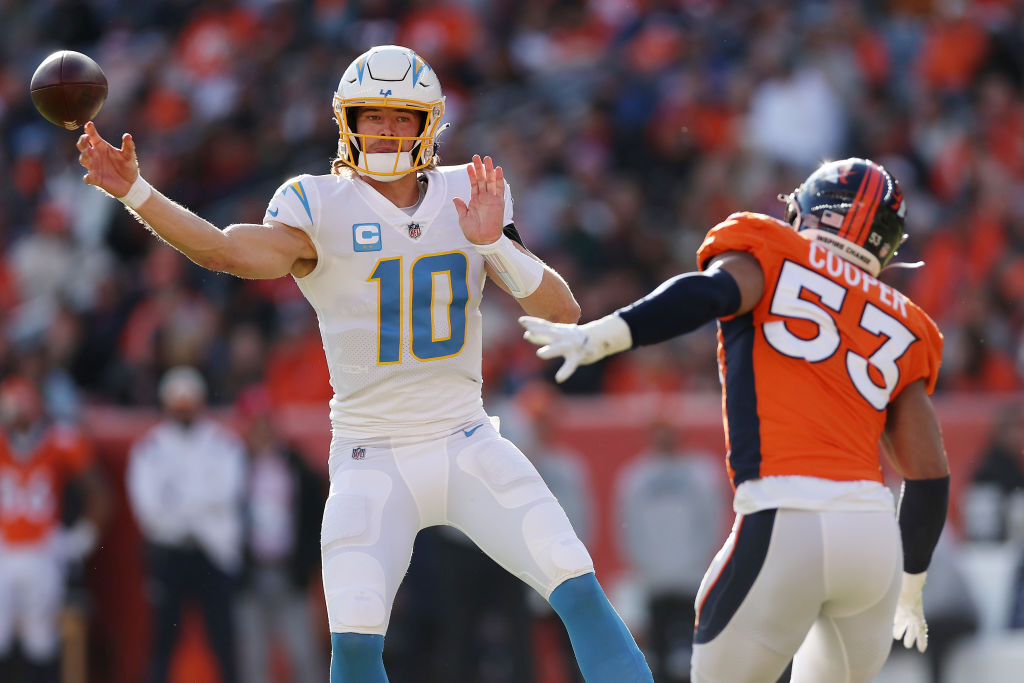 6/16
DENVER, COLORADO – JANUARY 08: Justin Herbert #10 of the Los Angeles Chargers attempts a pass while pressured by Jonathon Cooper #53 of the Denver Broncos during the first quarter at Empower Field At Mile High on January 08, 2023 in Denver, Colorado. (Photo by Matthew Stockman/Getty Images)

Justin Herbert joins Peyton Manning as the only players with 25+ touchdowns in each of his first three seasons. The Chargers have a special QB and Saturday night’s Herbert vs. Trevor Lawrence matchup in Jacksonville is going to be a fun duel for Wild Card Weekend.

Russell Wilson had only his third game with multiple touchdown passes to end Denver’s nine-game division losing skid but Sean Payton would still be crazy to take the Broncos gig. This is a franchise that needs a full control-alt-delete — the kind of project a man with Payton’s resume shouldn’t seek out unless it’s got a lot of that Wal-Mart money attached to it. 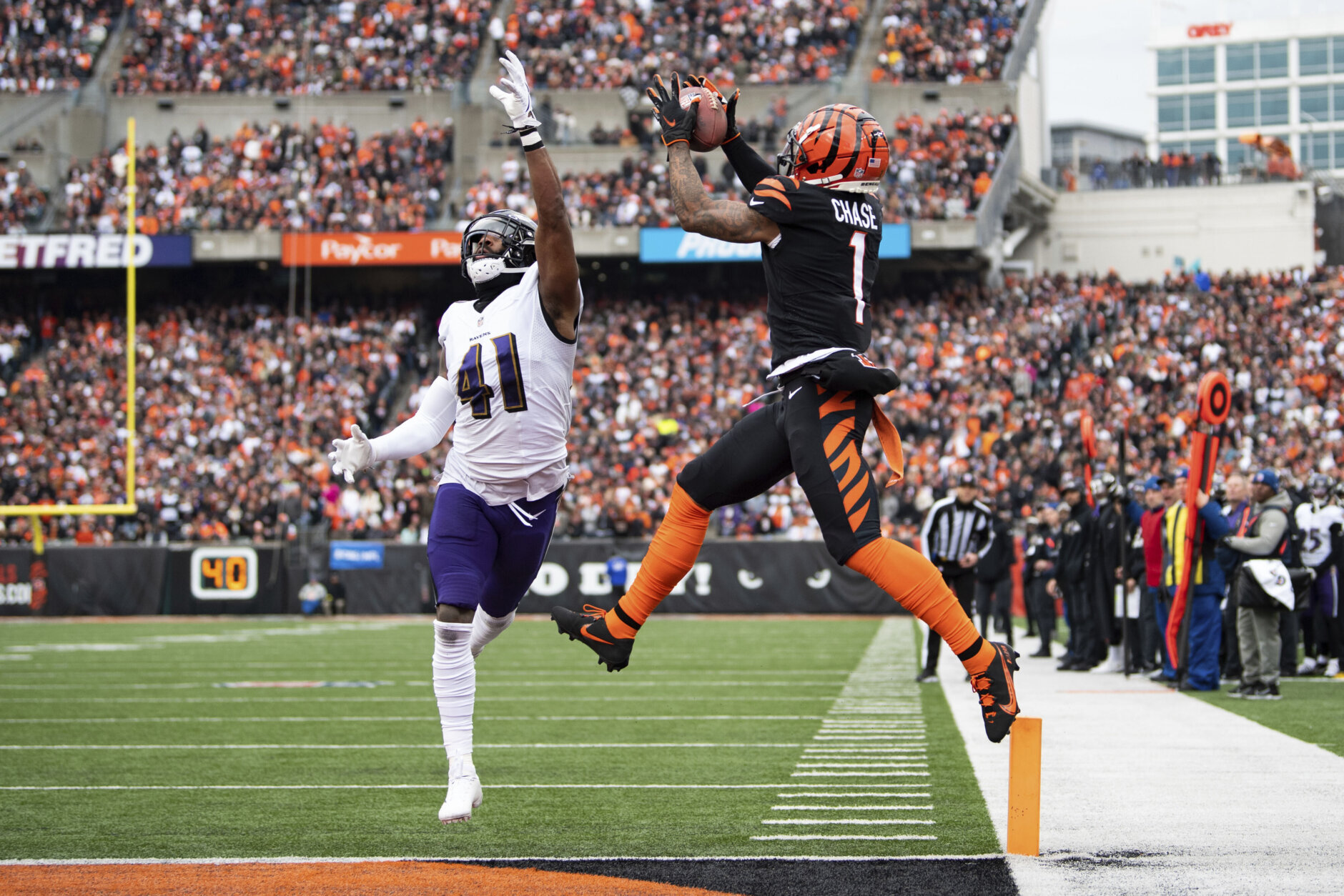 Baltimore gets another crack at Cincinnati but I’m torn on whether that’s good or bad for the Ravens — on the one hand, the only way they’ve ever advanced to a Super Bowl is as a wild card underdog. But on the other hand, even if Lamar Jackson is back in time for the playoffs, Baltimore doesn’t stand a chance.

Why? Because when Cincy is in the midst of a franchise-record eight-game win streak with a QB with the swagger to say things like the Bengals’ championship window is always open because the window is his whole career, methinks that team won’t lose at home to a rusty QB on an injury-riddled roster. 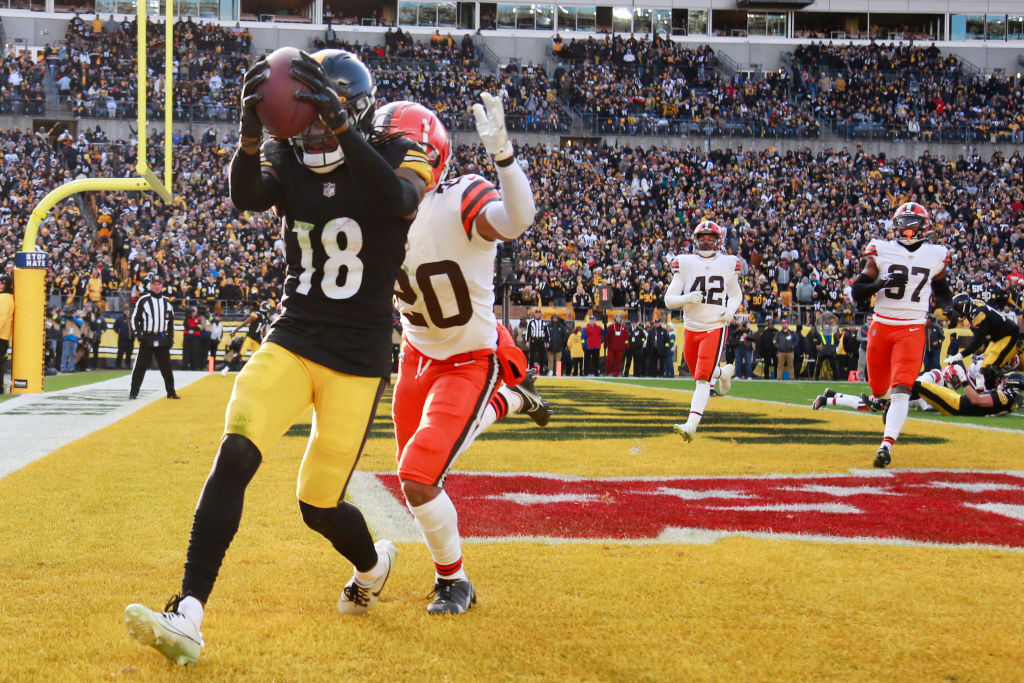 8/16
PITTSBURGH, PENNSYLVANIA – JANUARY 08: Diontae Johnson #18 of the Pittsburgh Steelers scores a two point conversion during the fourth quarter of the game against the Cleveland Browns at Acrisure Stadium on January 08, 2023 in Pittsburgh, Pennsylvania. (Photo by Justin K. Aller/Getty Images)

I don’t care that Pittsburgh ultimately missed the playoffs — it’s an outstanding accomplishment that Mike Tomlin compiled a winning record with this rag-tag group to notch his 16th straight non-losing season and has coached all but one of his 258 games with his team in playoff contention. Nobody finds elite head coaches like the Steelers.

As much as I hate to admit it, Cleveland figures to be back in true playoff contention in 2023 with a defensive shakeup and Deshaun Watson getting a full offseason in Kevin Stefanski’s offense. Watch the Browns this offseason. 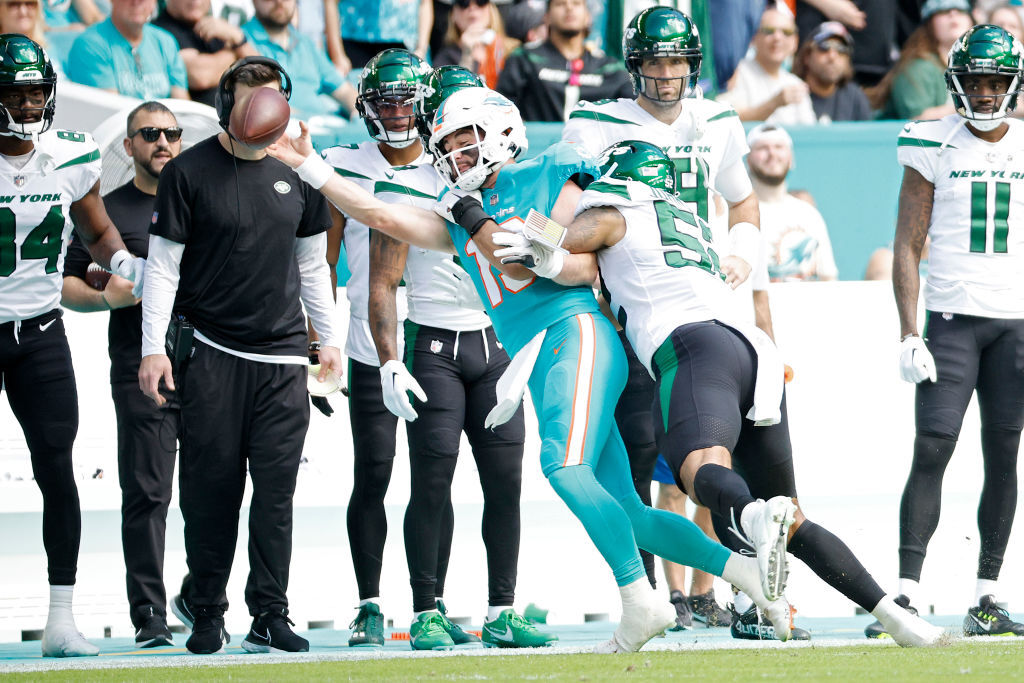 9/16
MIAMI GARDENS, FLORIDA – JANUARY 08: Skylar Thompson #19 of the Miami Dolphins attempts a pass while hit by Jermaine Johnson #52 of the New York Jets during the first quarter at Hard Rock Stadium on January 08, 2023 in Miami Gardens, Florida. (Photo by Cliff Hawkins/Getty Images)

Miami is taking its talents to the playoffs for the first time since 2016 but trotting out Skylar Thompson in Buffalo will get you completely blowed out. Blown out. Blowed out.

Robert Saleh has nothing to apologize for. Getting the QB-less Jets to the cusp of the playoffs is like making the playoffs anywhere else. Watch for Jimmy Garoppolo to land in New York in the offseason to push Gang Green into the postseason. 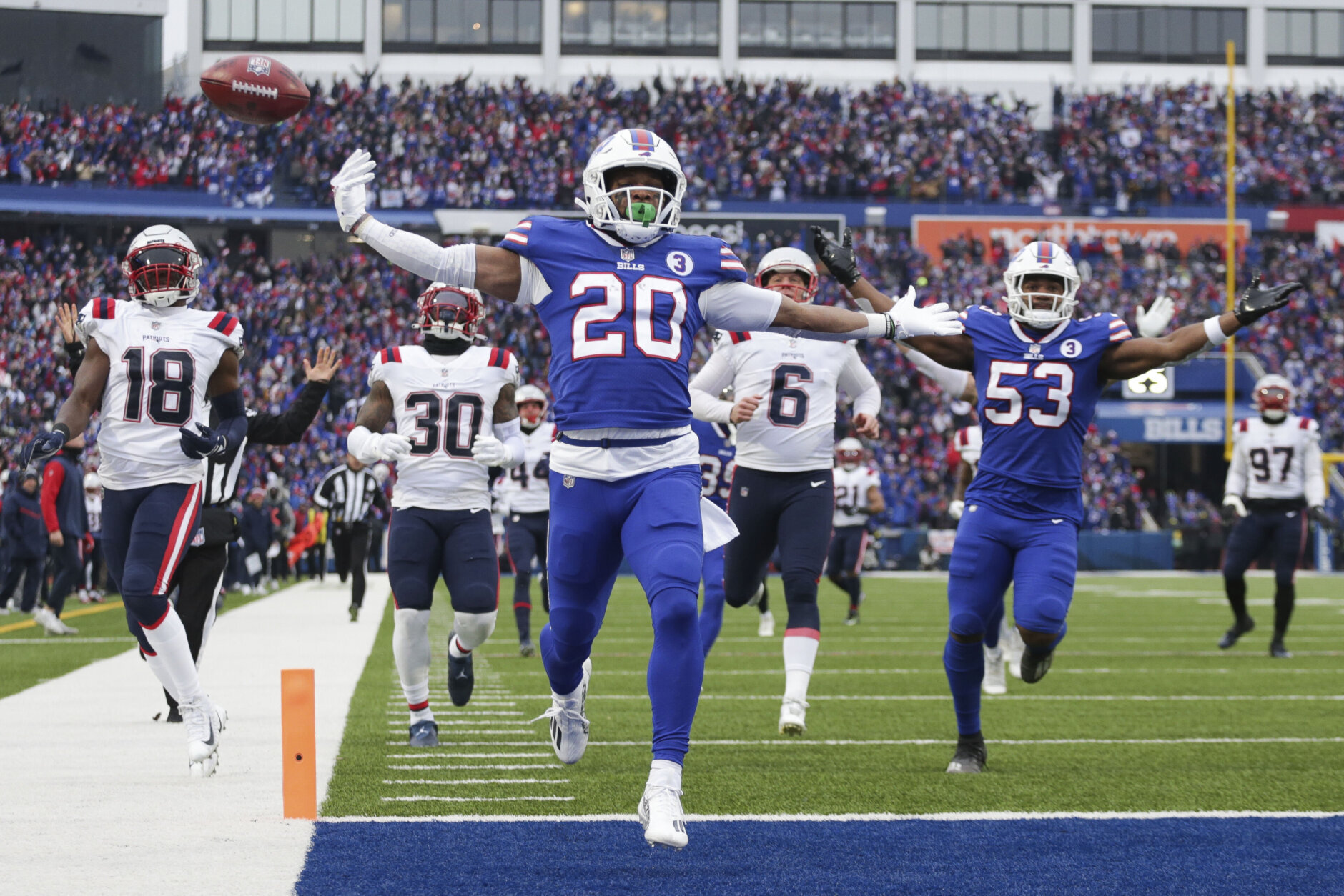 10/16
Buffalo Bills running back Nyheim Hines (20) scores a touchdown on a kickoff return during the first half of an NFL football game against the New England Patriots on Sunday, Jan. 8, 2023, in Orchard Park, N.Y. (AP Photo/Joshua Bessex)

Buffalo returned the opening kickoff for a touchdown in their first action since the Damar Hamlin incident and throttled their hated rival to match franchise records with seven straight wins to reach 13 for the season. I’m feeling pretty good about my preseason Super Bowl pick.

I know what Bill Belichick is historically but New England needs a hard reset. If Mike Vrabel gets fired in Tennessee, the Patriots would do well to turn the page on the Belichick era and hand off to an experienced coach already well-versed in the Patriot Way. 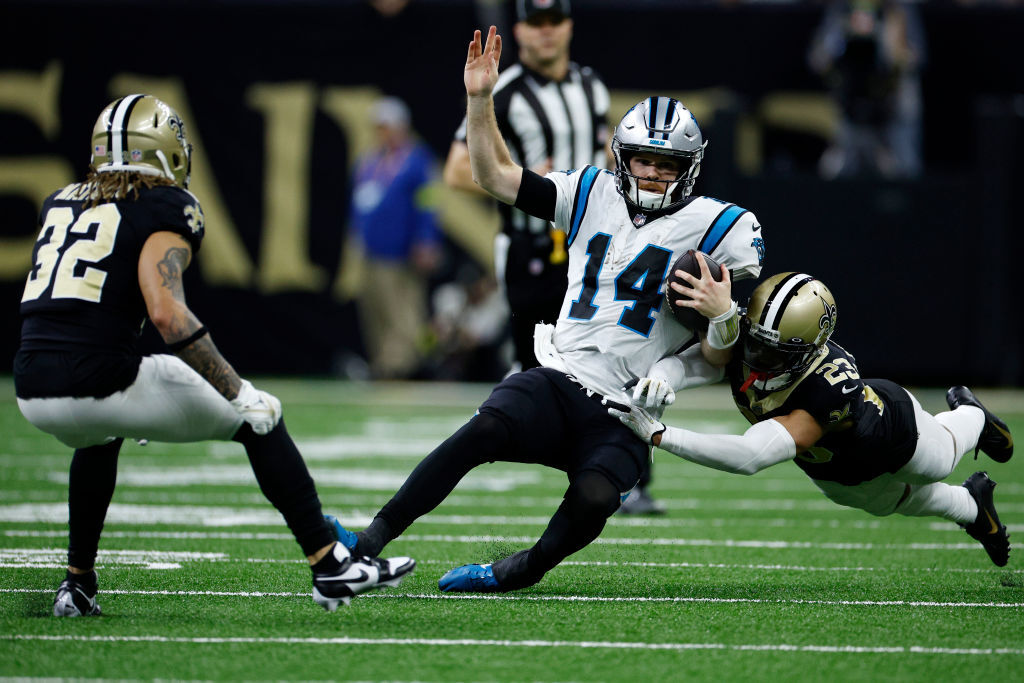 11/16
NEW ORLEANS, LOUISIANA – JANUARY 08: Sam Darnold #14 of the Carolina Panthers is tackled by Marshon Lattimore #23 of the New Orleans Saints during the second half at Caesars Superdome on January 08, 2023 in New Orleans, Louisiana. (Photo by Chris Graythen/Getty Images)

Carolina won a game with Sam Darnold sporting a 2.8 QB rating. If the Panthers don’t give Steve Wilks the full-time head coaching job, it’s Exhibit A in Brian Flores’ lawsuit.

And if Wilks isn’t the choice in Carolina, he should slide down to New Orleans because Dennis Allen ain’t an NFL head coach. Period. 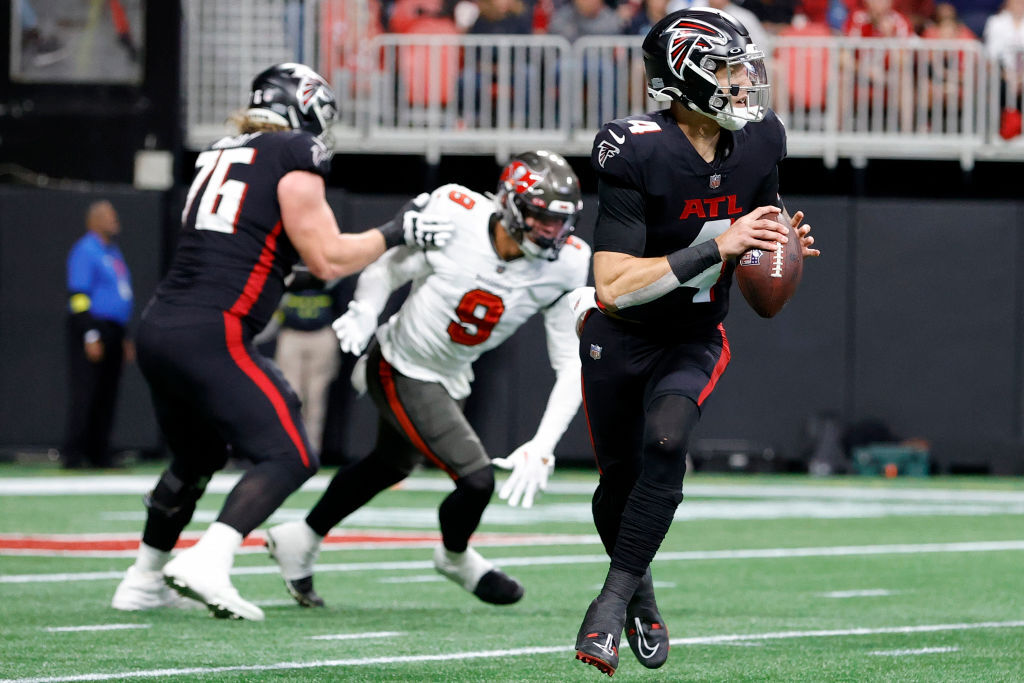 12/16
ATLANTA, GEORGIA – JANUARY 08: Desmond Ridder #4 of the Atlanta Falcons scrambles and looks to throw the ball during the first quarter against the Tampa Bay Buccaneers at Mercedes-Benz Stadium on January 08, 2023 in Atlanta, Georgia. (Photo by Alex Slitz/Getty Images)

Tom Brady stuck around long enough to break one of his seemingly-millions of NFL records and Tampa eases its way into a favorable matchup with the reeling Cowboys (who Brady has beaten all seven times he’s faced them). Would you really bet against a Bucs run?

Desmond Ridder threw his first two NFL touchdowns and has played well enough in this four-game audition for the starting QB gig in Atlanta, where the Falcons went 6-3 at home but just 1-7 on the road. Ridder will need to usher in more winning in 2023 or Arthur Smith may not last into 2024. 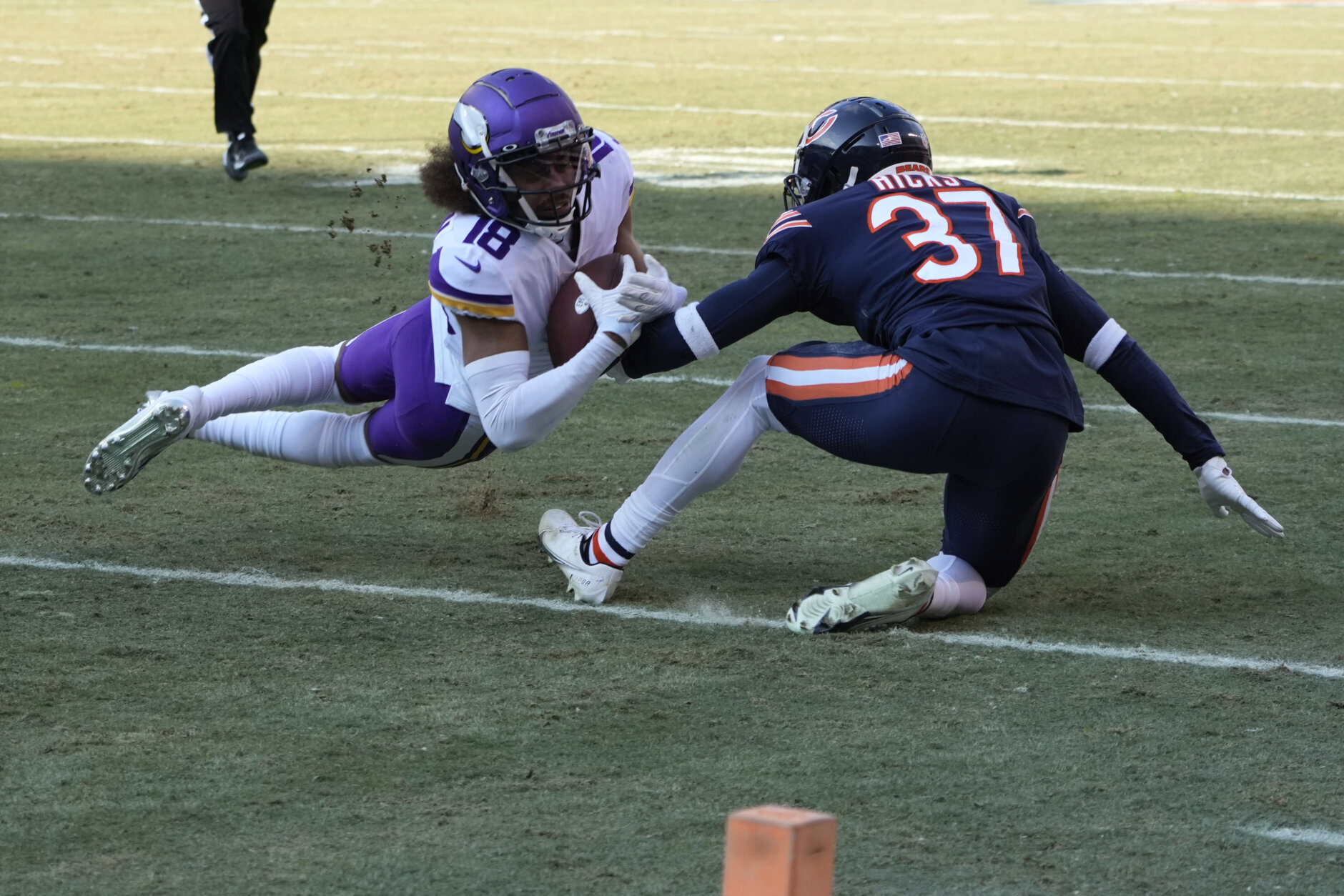 For the first time since 1947, the Chicago Bears are on the clock thanks to undesirable franchise records for consecutive losses (10) and total losses (14) in a season. But fear not, Bears fans — you already have a franchise quarterback so dealing away the No. 1 overall pick to someone who does not will give Justin Fields all the help he needs to get Chicago back to contention.

And even with this blowout victory, Minnesota is a 13-4 team that was actually outscored 424-427 in 2022. It just feels like the Vikings’ stay in the playoffs will be brief. 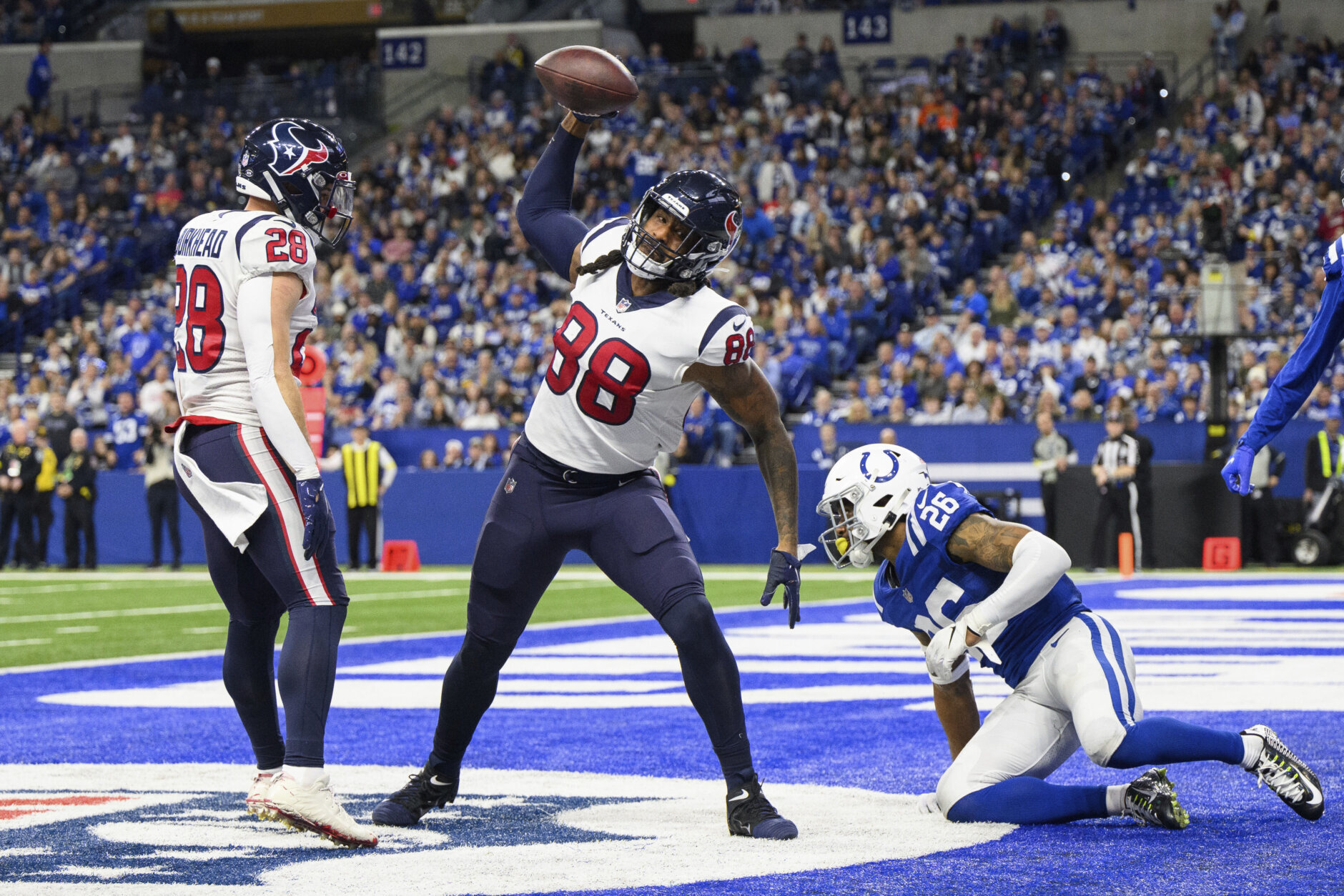 This thrilling finish cost Houston the No. 1 overall pick and Lovie Smith his job. It should also prompt Indy to be fined and docked draft picks for ever making this Jeff Saturday decision. 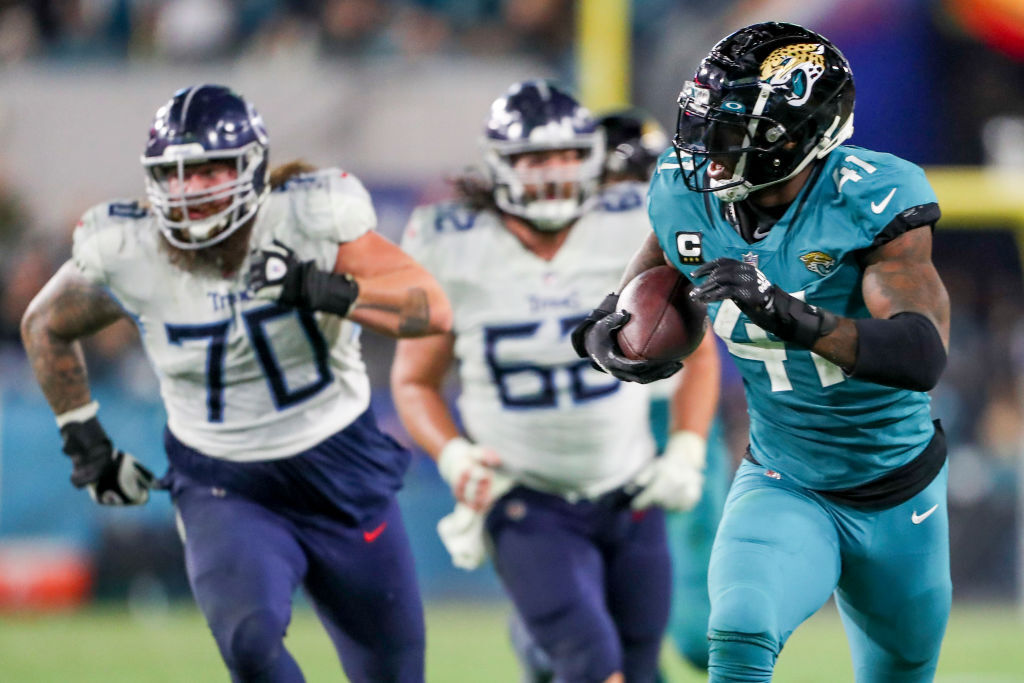 15/16
JACKSONVILLE, FLORIDA – JANUARY 07: Josh Allen #41 of the Jacksonville Jaguars returns a fumble for a go ahead touchdown during the fourth quarter against the Tennessee Titans at TIAA Bank Field on January 07, 2023 in Jacksonville, Florida. (Photo by Courtney Culbreath/Getty Images)

Jacksonville goes from worst in the league to first in the lackluster AFC South, with a Washington-like jump from 3-7 to division champs. Consider this proof that Doug Pederson is as good an NFL coach as Urban Meyer is incompetent at the pro level.

Tennessee has already blown out their general manager so a hard reset probably wouldn’t be a bad thing for a franchise that just went from 7-3 and a sure bet to win its division to 7-10. 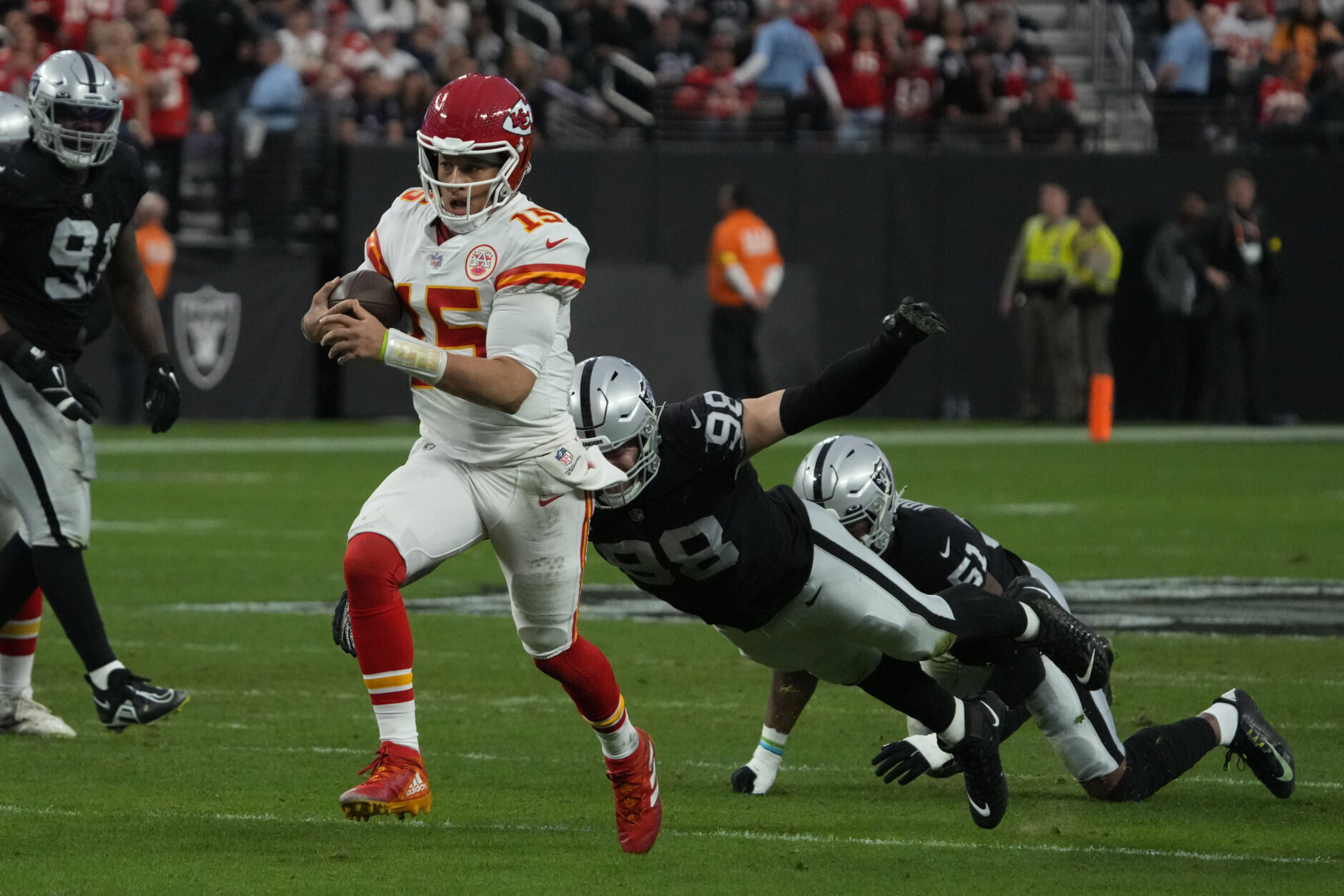 But why waste this on the Raiders? Save it for the playoffs!

And Las Vegas is right. Silver and Black fans deserve better than the purgatory that is Josh McDaniels.

Sports on TV for Sunday, February 5