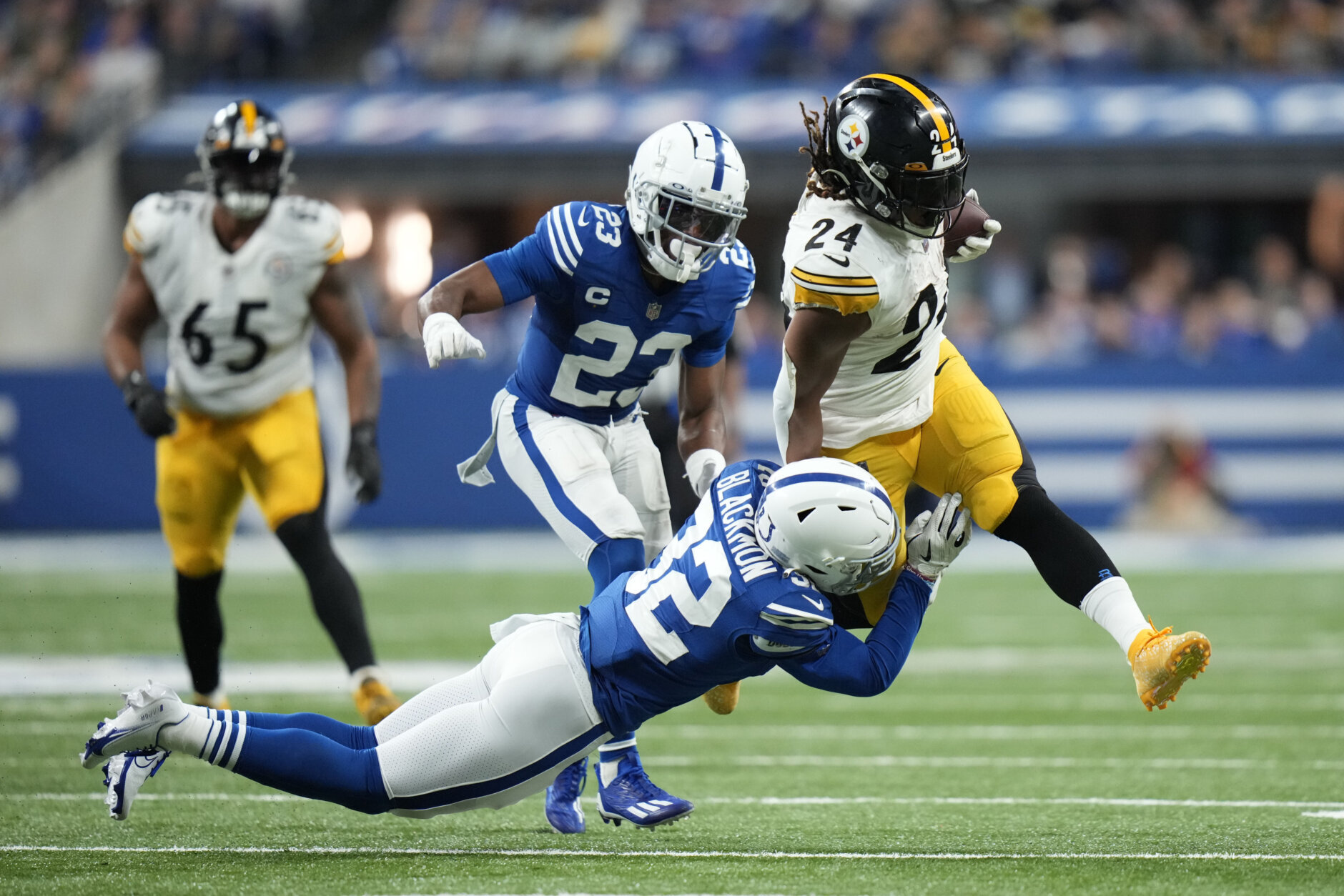 I know it comes in a bad game against an even worse (and embarrassingly inept) offense but Mike Tomlin’s 19-3 record on Monday Night Football is incredibly impressive. If he can lead what is by far his worst Steelers team to a non-losing record to keep his streak alive, name the Coach of the Year award after Tomlin. 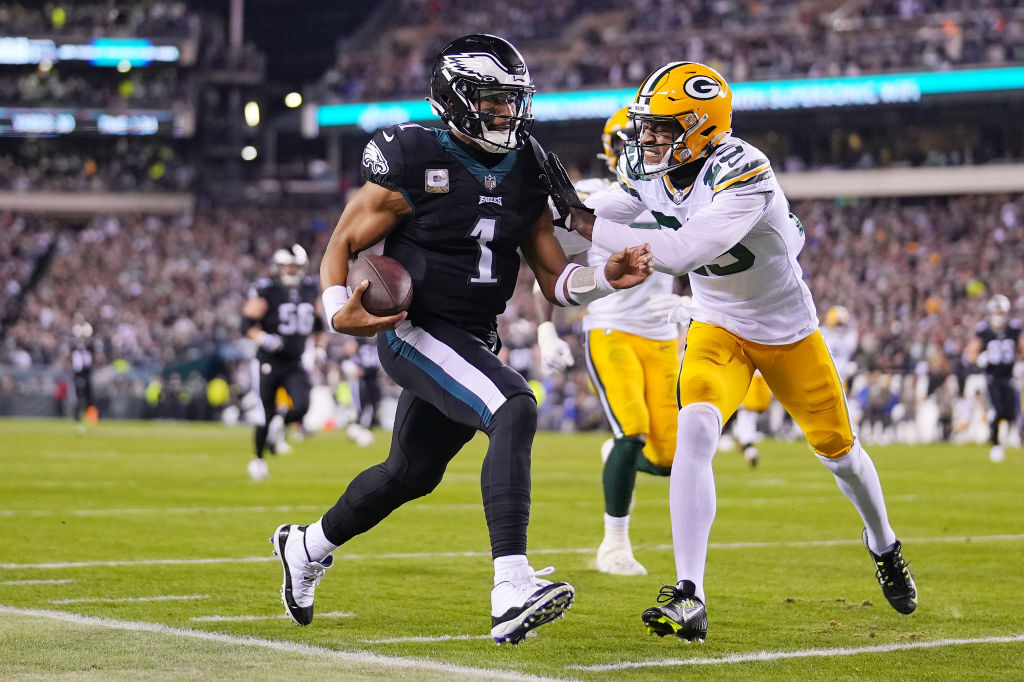 Don’t let the presumed end of the Aaron Rodgers era in Green Bay distract you from this monster performance from Jalen Hurts, who is only the fourth player in the Super Bowl era to tally 150 yards rushing and 150 more passing in the same game. This man should be getting more MVP consideration.

Meanwhile, the reigning two-time MVP is likely done in Titletown. He was already dealing with a broken thumb and last night’s oblique injury should be excuse enough to place him on injured reserve and get an extended look at Jordan Love. If he starts like he finished in Philly, Love is the new face of the Packers. 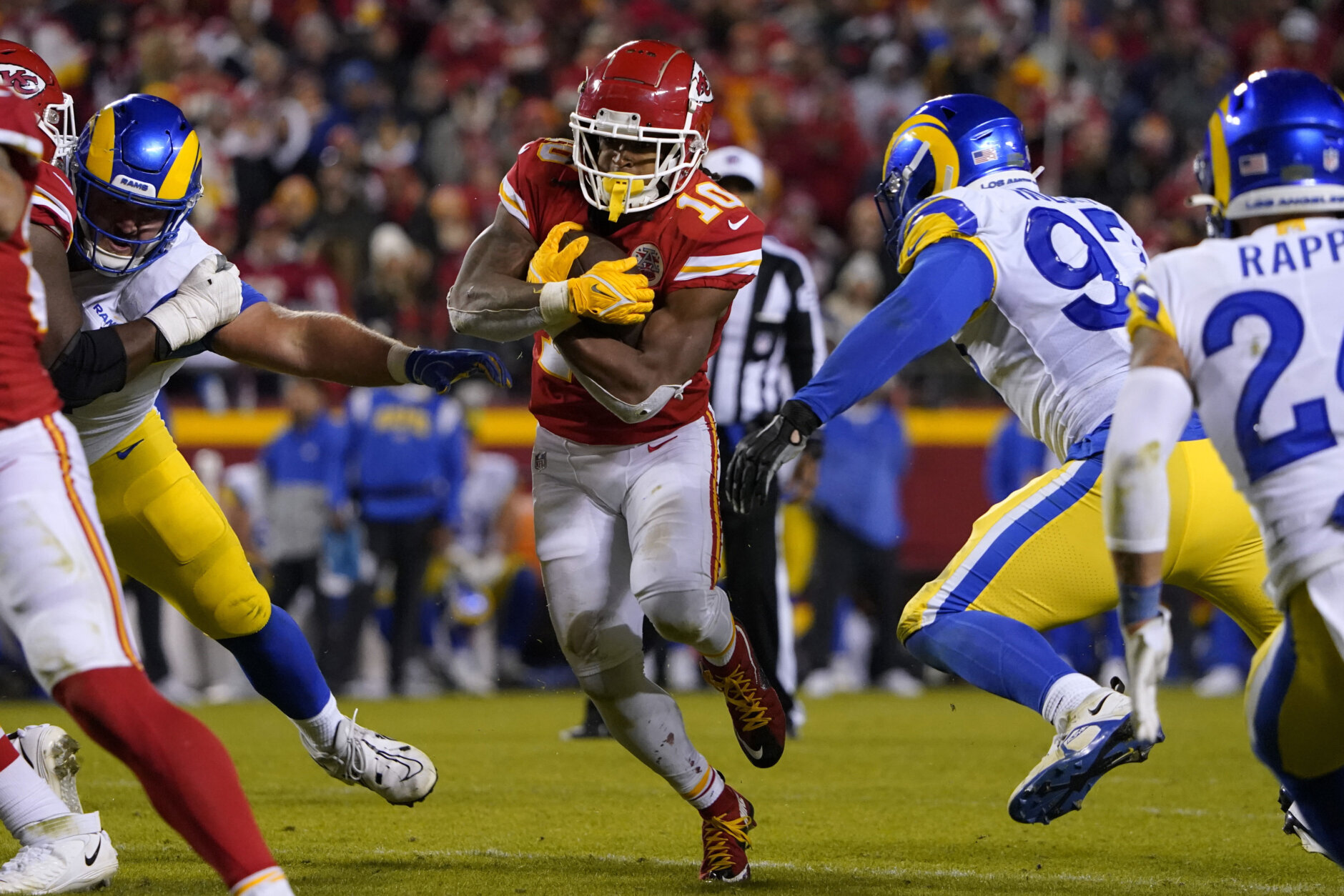 Los Angeles, off to their worst start in 11 years, has it so bad even their coach is a threat to land on injured reserve.

The slow move replay of McVay getting BLASTED 😱 pic.twitter.com/COshFDRHIs

Meanwhile, Kansas City has a win streak of at least five games for the 10th straight season. The Chiefs just ain’t fair. 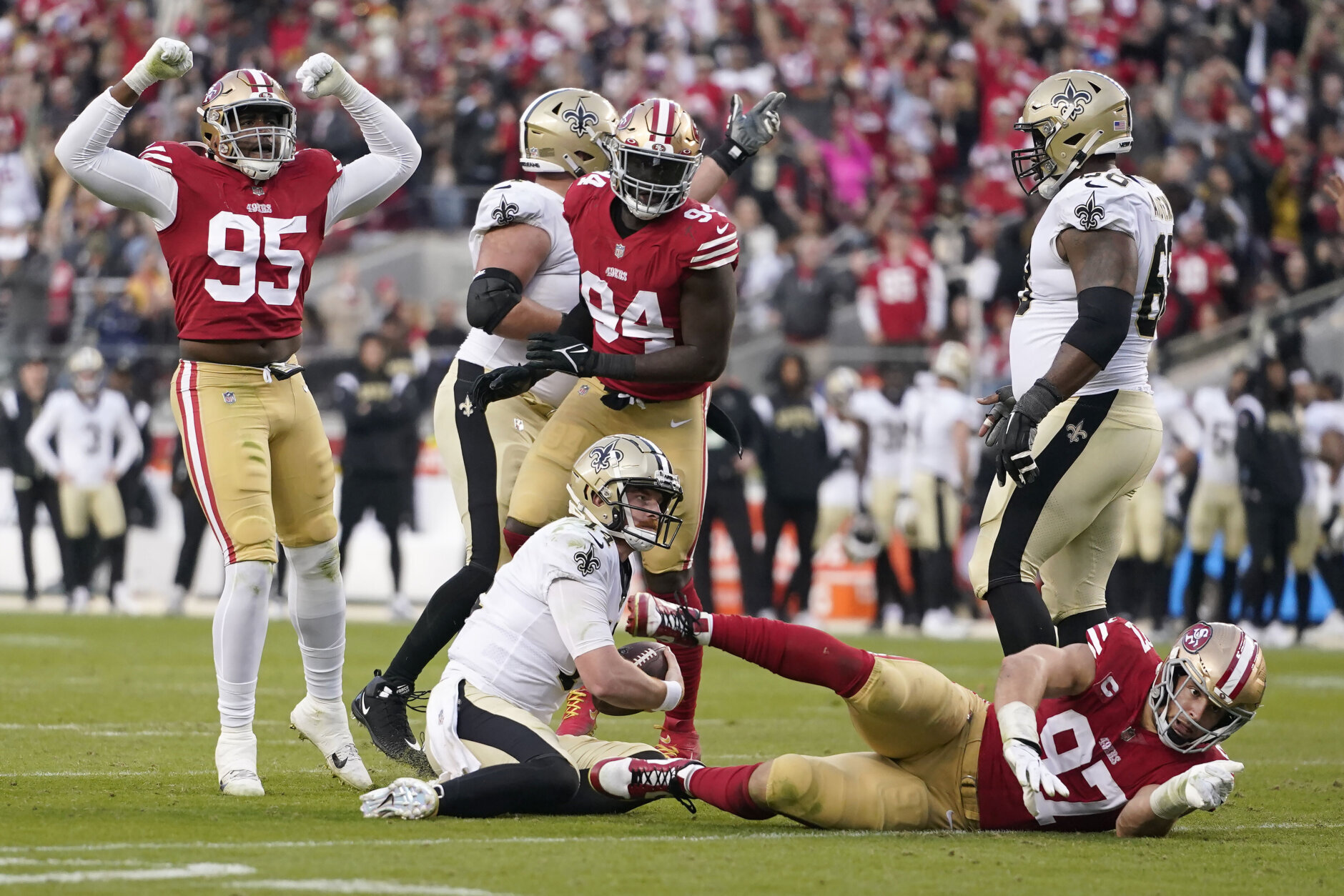 While many focus on San Francisco’s improved QB play and a run game anchored by Christian McCaffrey, I’m more enamored by the Niners’ defense.

This shutout (the first against New Orleans since … the Niners blanked the Saints in 2001) was the fourth straight game the 49ers haven’t given up a single point in the second half, outscoring opponents 57-0 over a span in which they’re allowing only 10 points per game. San Fran has won a league-best six games by double digits. In a wide-open NFC, this is my new Super Bowl favorite. 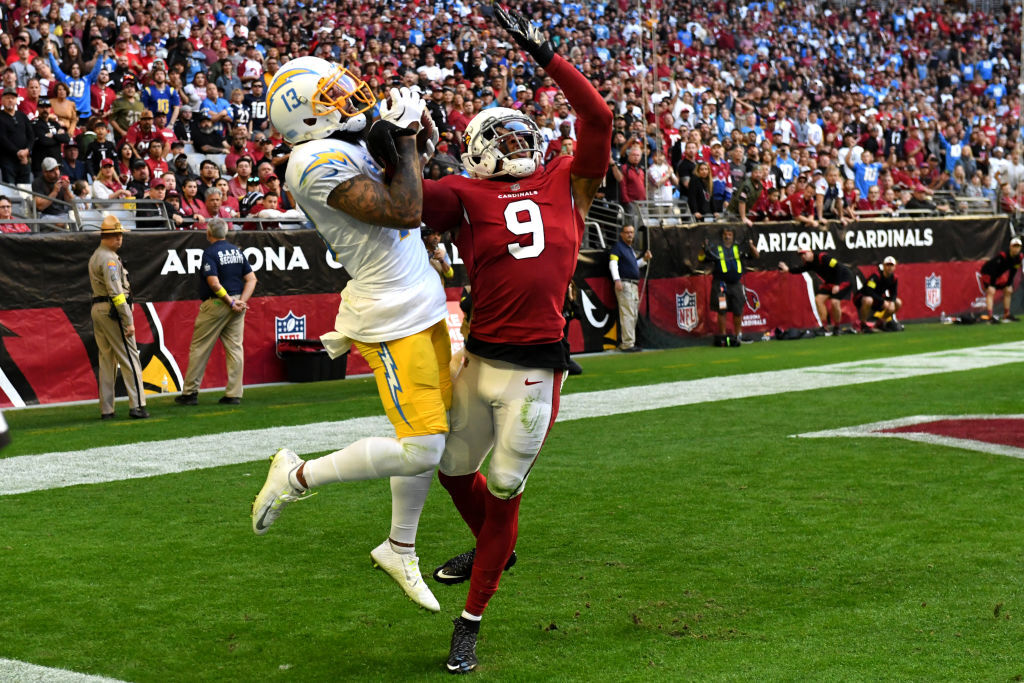 5/16
GLENDALE, ARIZONA – NOVEMBER 27: Keenan Allen #13 of the Los Angeles Chargers works to make a catch while being defended by Isaiah Simmons #9 of the Arizona Cardinals in the fourth quarter at State Farm Stadium on November 27, 2022 in Glendale, Arizona. Allen was marked out of bounds on the play. (Photo by Norm Hall/Getty Images)

If you were holding out hope that Arizona would be the third straight NFL team to play in a Super Bowl on their home field, allow me to give you this dose of reality: the Cardinals are 5-13 in their last 18 games and currently have the most home losses in the NFL (6). Don’t be surprised if Sean Payton is coaching this team in 2023. 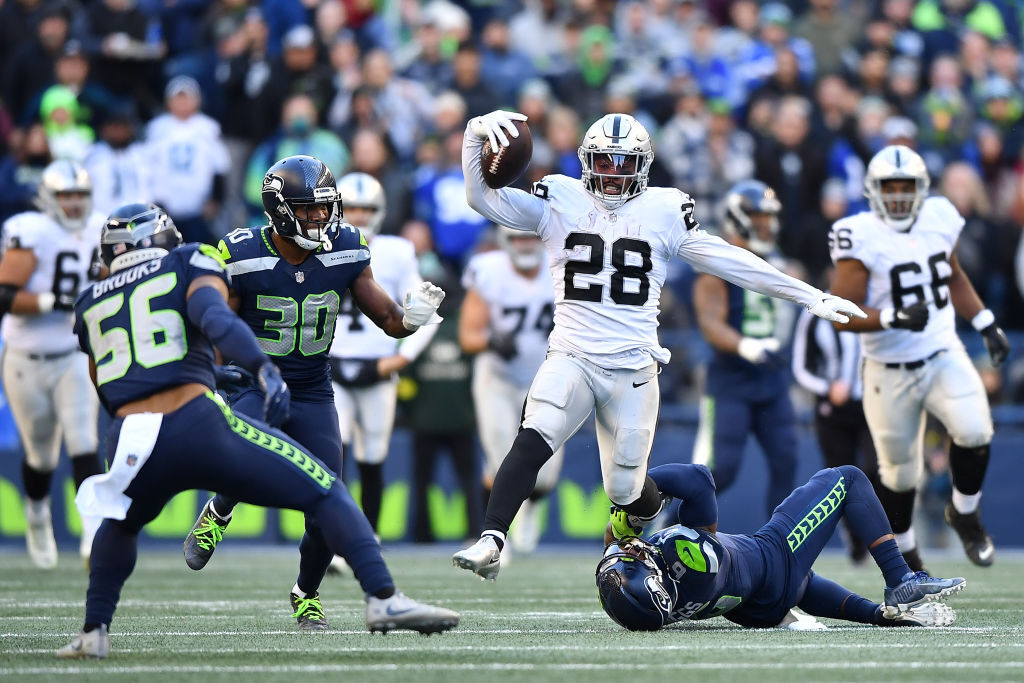 6/16
SEATTLE, WASHINGTON – NOVEMBER 27: Josh Jacobs #28 of the Las Vegas Raiders runs with the ball while being tackled by Quandre Diggs #6 of the Seattle Seahawks in the third quarter at Lumen Field on November 27, 2022 in Seattle, Washington. (Photo by Jane Gershovich/Getty Images)

If Washington makes the playoffs, they should send a holiday ham to Las Vegas for the Raiders helping out the Burgundy and Gold with this thrilling win propelled by Josh Jacobs’ 300-yard outburst, the most scrimmage yards in a game since 2015. This feels like one that will haunt the Seahawks. 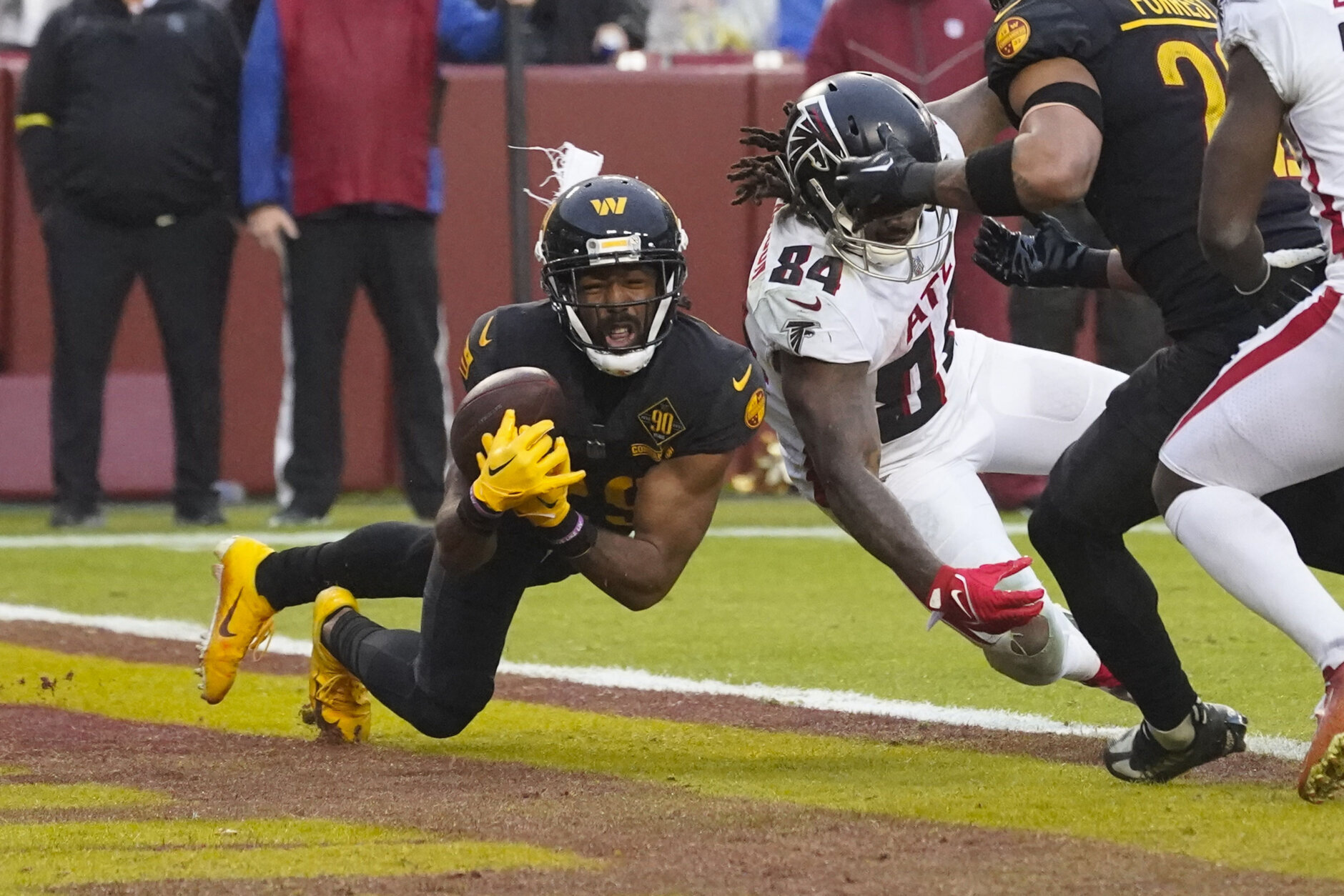 Washington is off to its best start since 2008, Ron Rivera got his 100th win as a head coach (including playoffs) and Brian Robinson notched his first 100-yard rushing game just three months removed from being shot — yet, true to form, the Commanders undermined their own good day with another lazy tribute to Sean Taylor.

Please, Dan Snyder … you’re almost gone. Just keep his name out of your mouth until you leave. 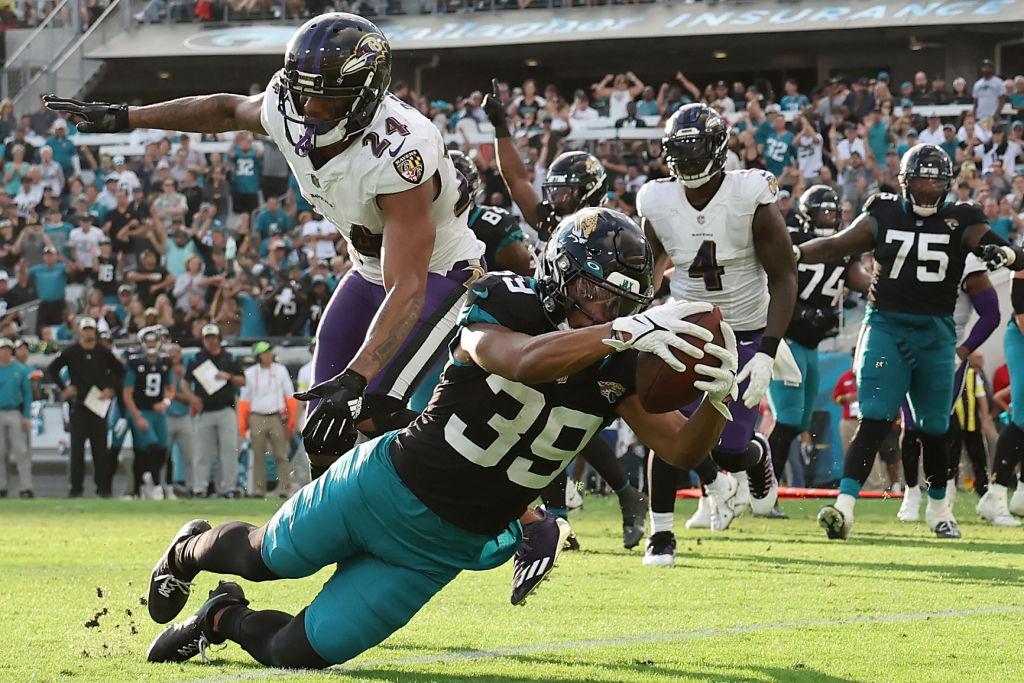 8/16
JACKSONVILLE, FLORIDA – NOVEMBER 27: Jamal Agnew #39 of the Jacksonville Jaguars scores a touchdown during the fourth quarter in the game against the Baltimore Ravens at TIAA Bank Field on November 27, 2022 in Jacksonville, Florida. (Photo by Mike Carlson/Getty Images)

This is weird to say about Baltimore but the Ravens defense, after a historic letdown in Jacksonville, will keep them from being a true playoff contender. If they can’t beat a Jaguars team that has now reached four wins for the first time since 2019, it’s hard to see them hanging with the Bills and/or Chiefs in the postseason. 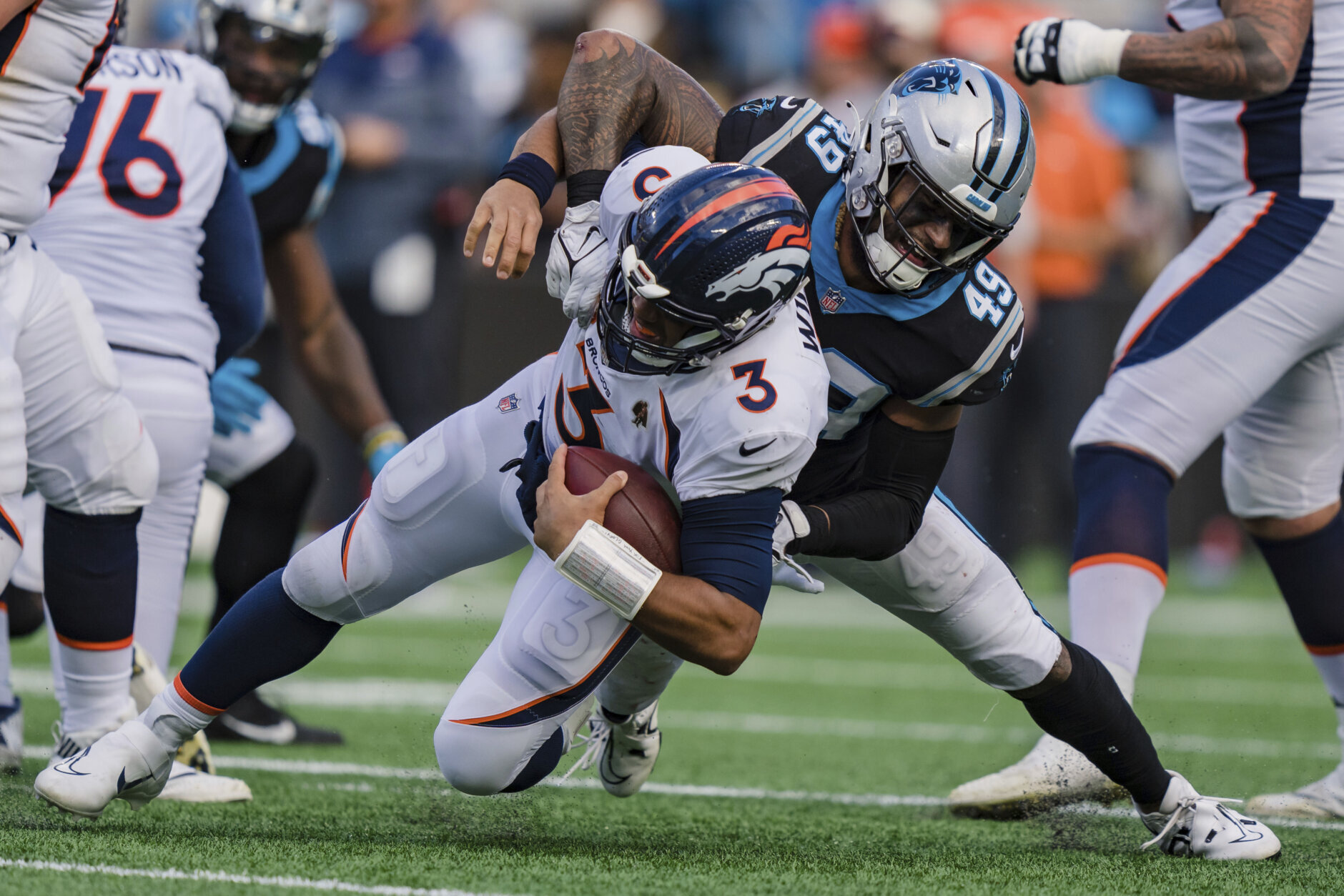 I never thought I’d see the day it’s even plausible that Sam Darnold is better than Russell Wilson.

The latter just had his ninth game with only one touchdown or fewer and Denver has been held to just 12 points per game during this three-game slide. And the outstanding Broncos defense is clearly sick of it.

The Broncos are DONE with Russ pic.twitter.com/HcelVfEvsH 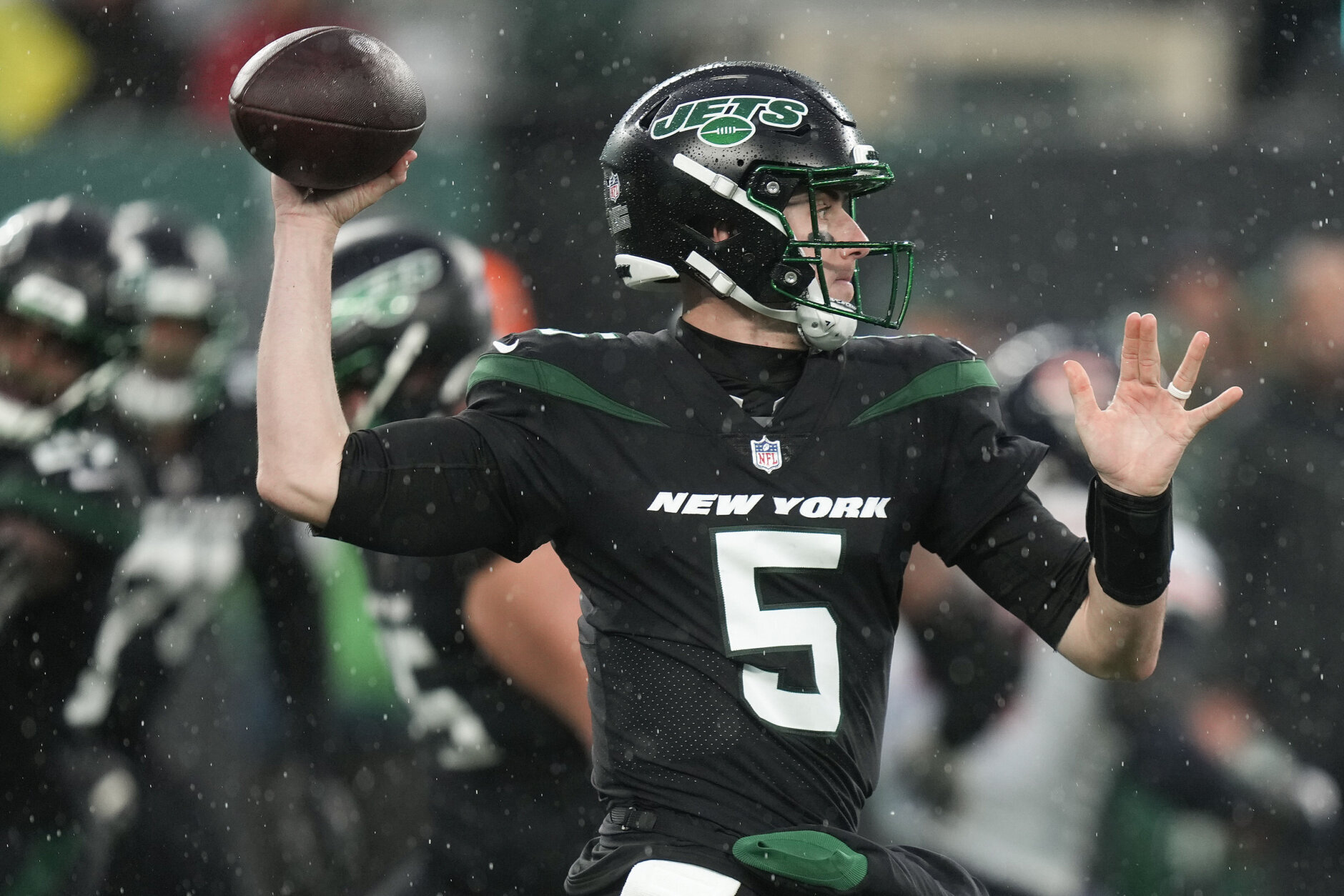 Meanwhile, the Mike White revelation (no, not that Mike White) included the Jets’ most first-half passing yards (235) since 2006 and a season-high 466 total yards. Draft status be damned — Zach Wilson (a.k.a. JaMarcus Russell 2.0) should never see the field for Gang Green again. 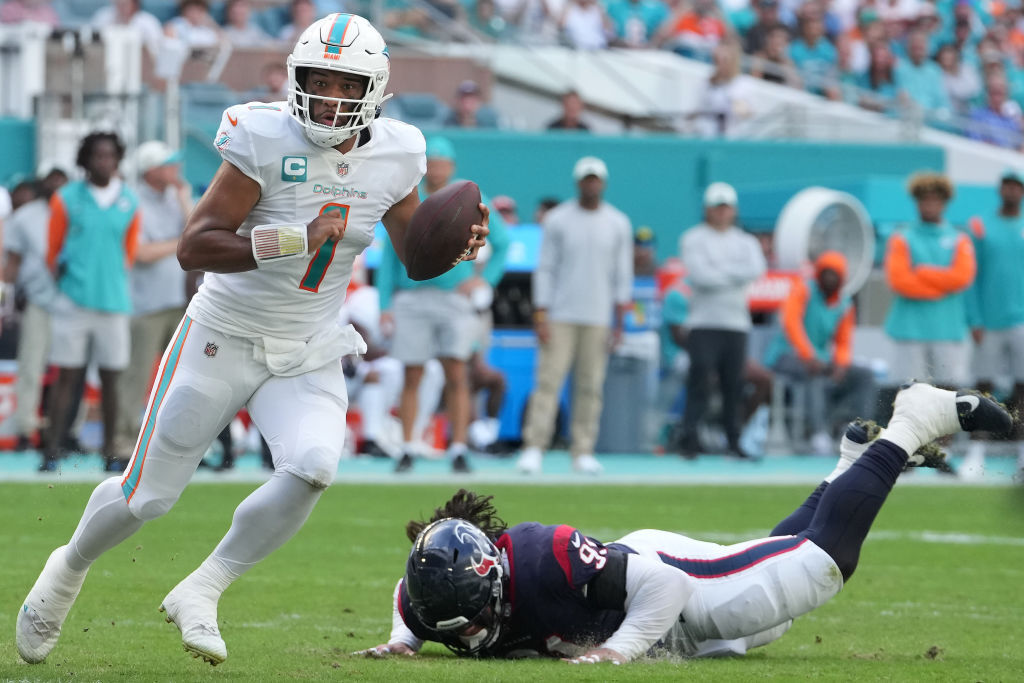 11/16
MIAMI GARDENS, FLORIDA – NOVEMBER 27: Tua Tagovailoa #1 of the Miami Dolphins runs the ball during the first quarter in the game against the Houston Texans at Hard Rock Stadium on November 27, 2022 in Miami Gardens, Florida. (Photo by Eric Espada/Getty Images)

It’s time to put some respect on Tua Tagovailoa’s name.

He’s got a 11-0 TD-to-INT ratio and he’s led Miami to over 30 points per game during this five-game winning streak that has the Dolphins off to their best start since 2001. Buffalo won’t win the AFC East without a fight. 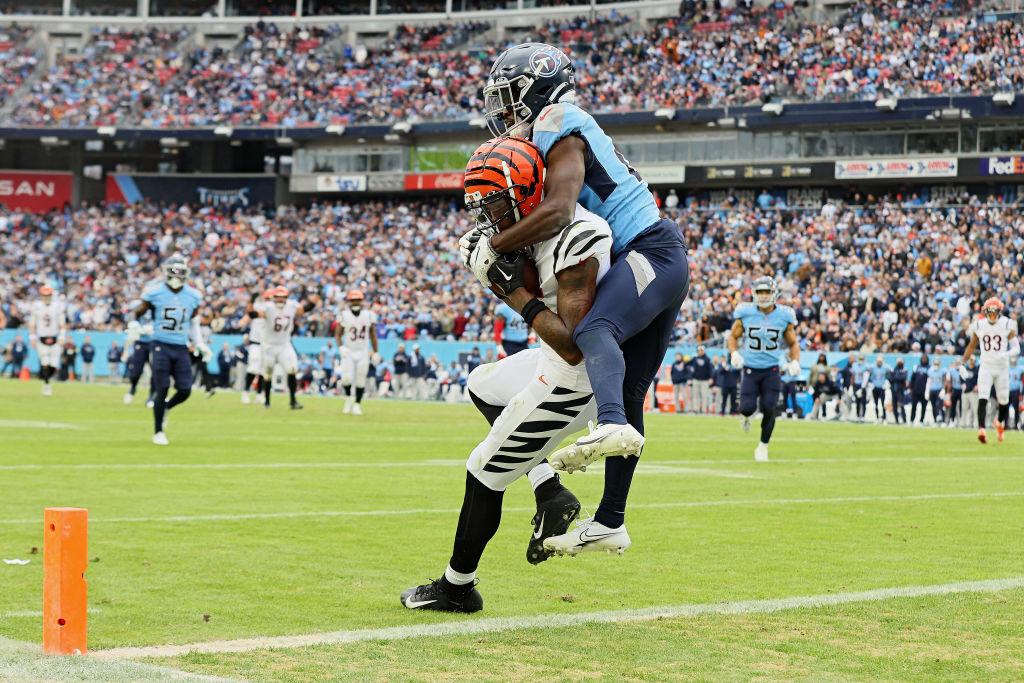 12/16
NASHVILLE, TENNESSEE – NOVEMBER 27: Tee Higgins #85 of the Cincinnati Bengals catches the ball for a touchdown as Roger McCreary #21 of the Tennessee Titans defends during the fourth quarter at Nissan Stadium on November 27, 2022 in Nashville, Tennessee. (Photo by Andy Lyons/Getty Images)

It’s ok not to remember these Titans.

Tennessee is now 1-4 against teams currently with winning records so this game was less about Cincinnati owning Tennessee than the Titans simply not being good enough to beat the NFL’s best. Don’t expect them to do more than win their easy division. 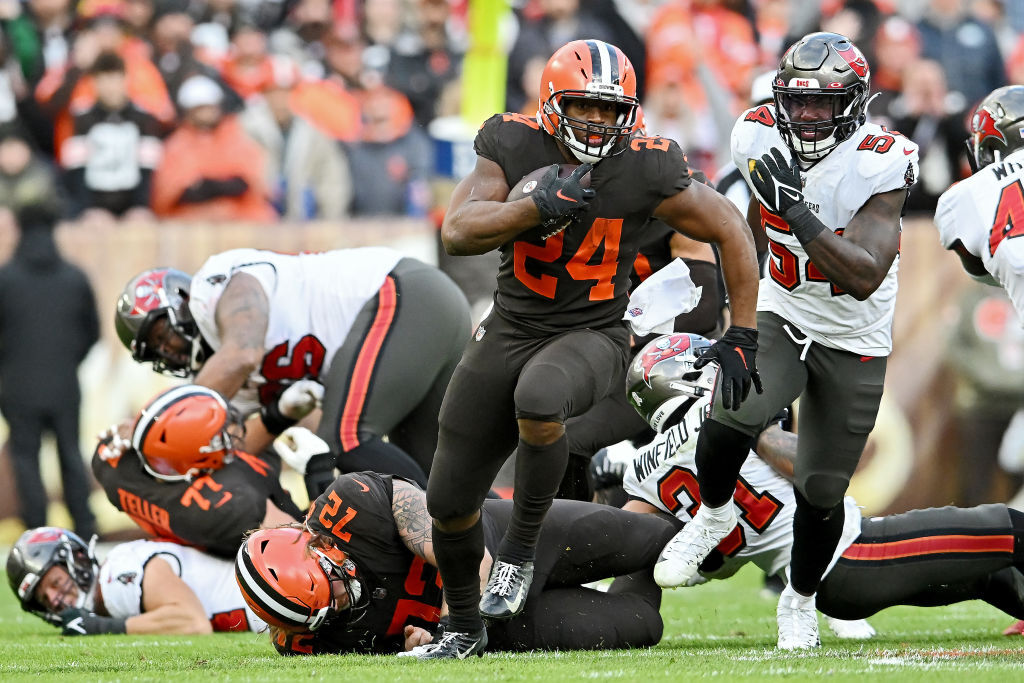 13/16
CLEVELAND, OHIO – NOVEMBER 27: Nick Chubb #24 of the Cleveland Browns runs with the ball as Lavonte David #54 of the Tampa Bay Buccaneers defends during the second half at FirstEnergy Stadium on November 27, 2022 in Cleveland, Ohio. (Photo by Nick Cammett/Getty Images)

How bad is this loss for Tampa? On Cleveland’s trashed turf and stinky stands, the Browns scored their first OT touchdown since 1991 to add to the pile of Tom Brady’s most losses since 2009. Not a bad way to segue to the Deshaun Watson era. 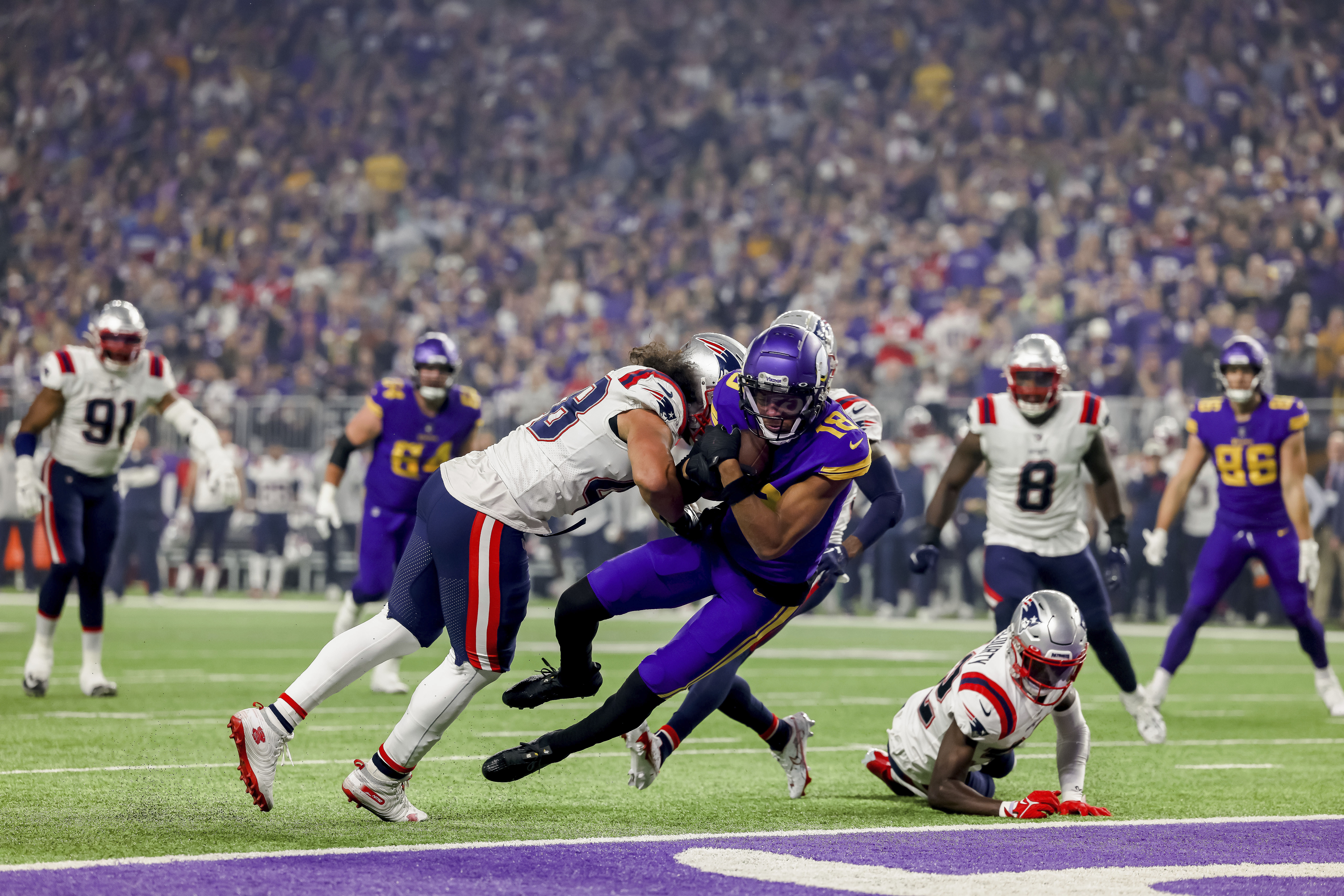 14/16
Minnesota Vikings wide receiver Justin Jefferson (18) falls into the end zone for a touchdown against the New England Patriots during the first half of an NFL football game Thursday, Nov. 24, 2022 in Minneapolis. (AP Photo/Stacy Bengs)

What better way to cap the first Thanksgiving with three one-score games since 1926 than with Minnesota’s franchise-record sixth comeback win of the season? 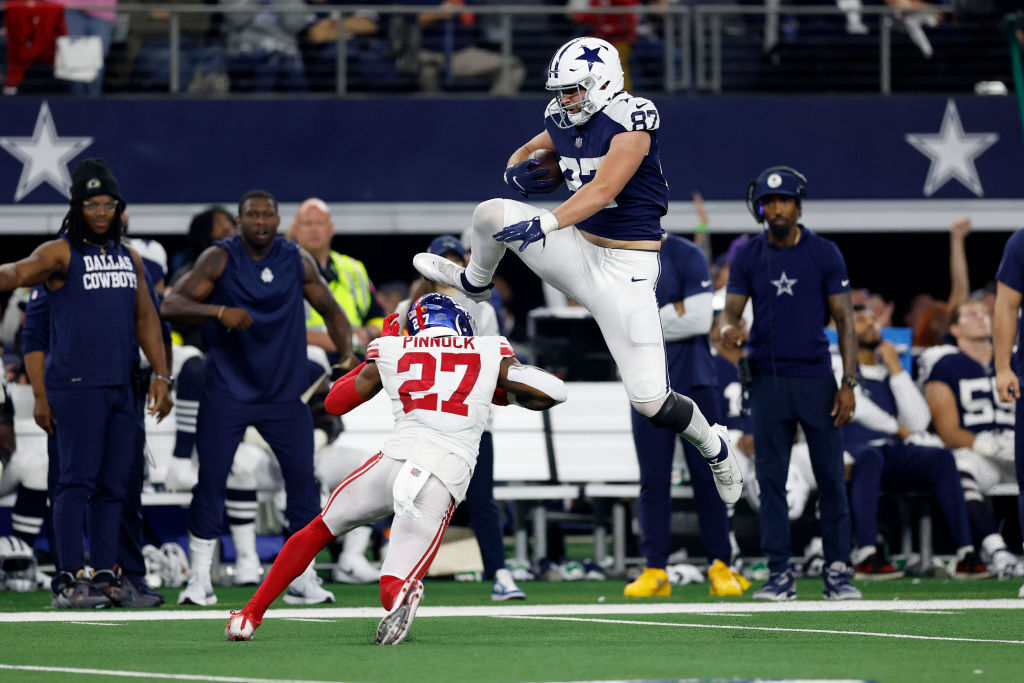 15/16
ARLINGTON, TEXAS – NOVEMBER 24: Jake Ferguson #87 of the Dallas Cowboys jumps over Jason Pinnock #27 of the New York Giants during the second half at AT&T Stadium on November 24, 2022 in Arlington, Texas. (Photo by Wesley Hitt/Getty Images)

In front of a record audience, Dallas grabbed the inside track on second place in the NFC East (and perhaps on the OBJ sweepstakes) by handling an injury-depleted Giants team whose promising season is now on the brink (whether their coach acknowledges it or not).

Oh, and if you’re looking for comment on Jerry Jones’ long-ago misdeeds … what exactly do you expect from an 80-year-old white dude from Arkansas who’s never hired a Black head coach and thumbed his nose at the Rooney Rule since its inception? 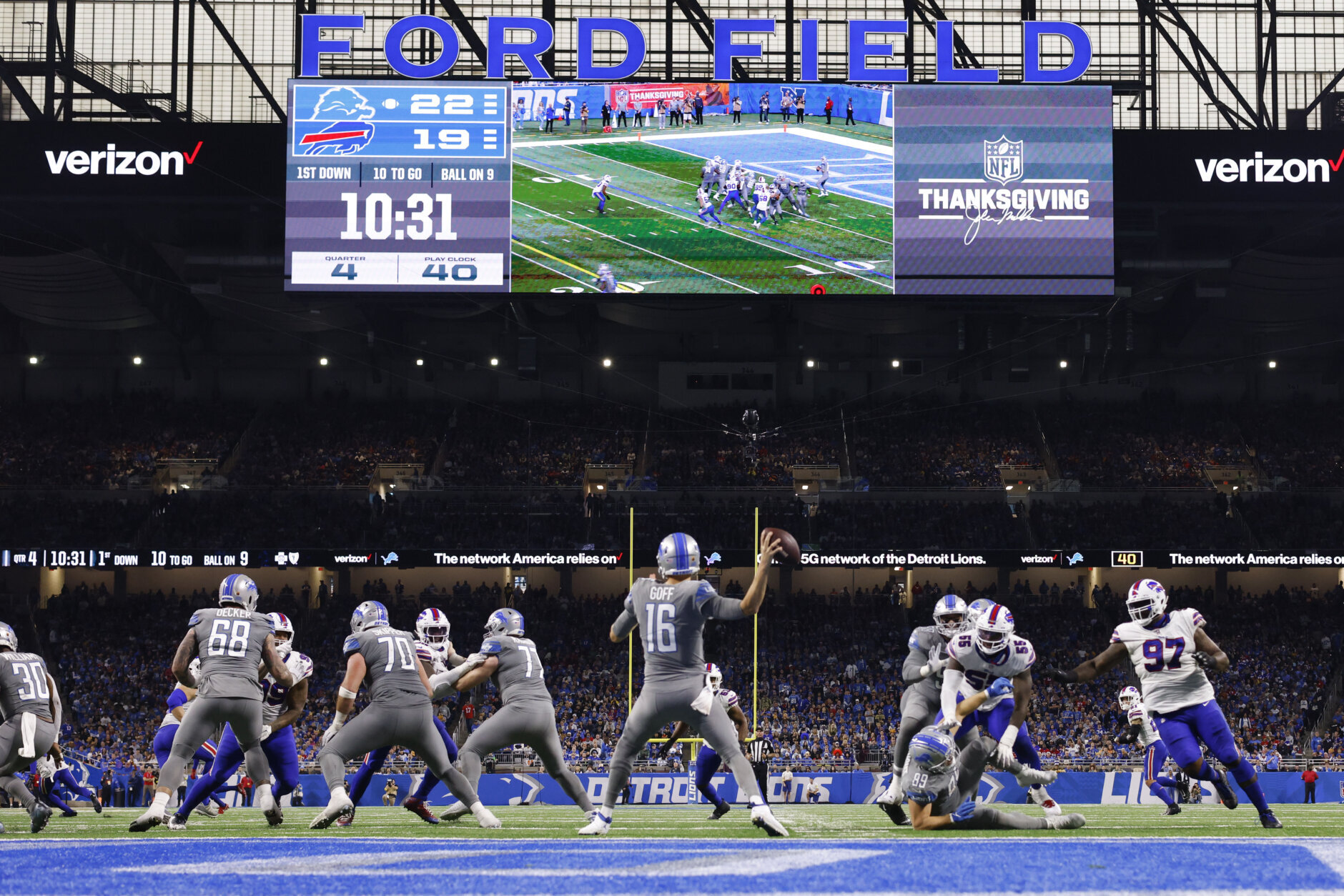 16/16
Detroit Lions quarterback Jared Goff (16) passes in the second half against the Buffalo Bills during an NFL football game, Thursday, Nov. 24, 2022, in Detroit. (AP Photo/Rick Osentoski)

Props to Detroit for keeping this game closer than expected and introducing a beverage that looks as delicious as it is kinda naughty.