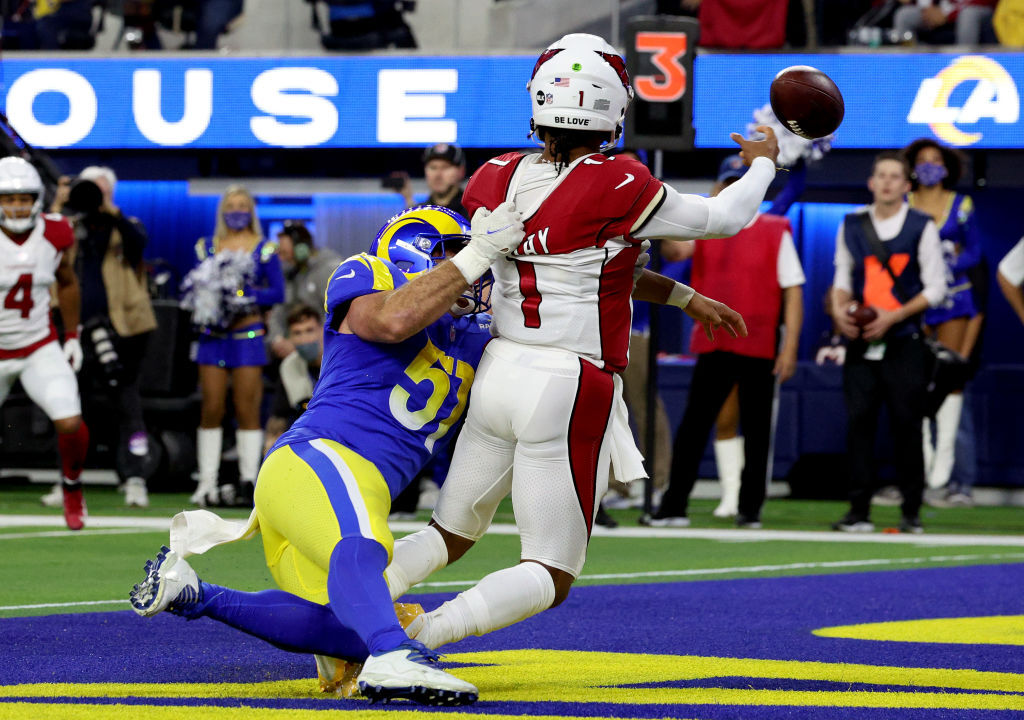 1/6
INGLEWOOD, CALIFORNIA – JANUARY 17: Kyler Murray #1 of the Arizona Cardinals is tackled by by Anthony Hines III #57 of the Los Angeles Rams in the second quarter of the NFC Wild Card Playoff game at SoFi Stadium on January 17, 2022 in Inglewood, California. (Photo by Harry How/Getty Images)

A stifling defense that notched the shortest playoff Pick 6 ever. Matthew Stafford playing the game of his life for his first playoff win in 13 years. Everything went right in L.A. for the Rams and props to them for stepping up … but holler at me when they do this to Tom Brady and not a third-year QB in his first playoff appearance.

Speaking of Kyler Murray, to say he failed to meet expectations is a massive understatement, as his first taste of the postseason should be spit out after what was easily his worst performance. It’s easy to say Arizona’s season ended when DeAndre Hopkins’ season did but the Cardinals were never as good as their record implied. 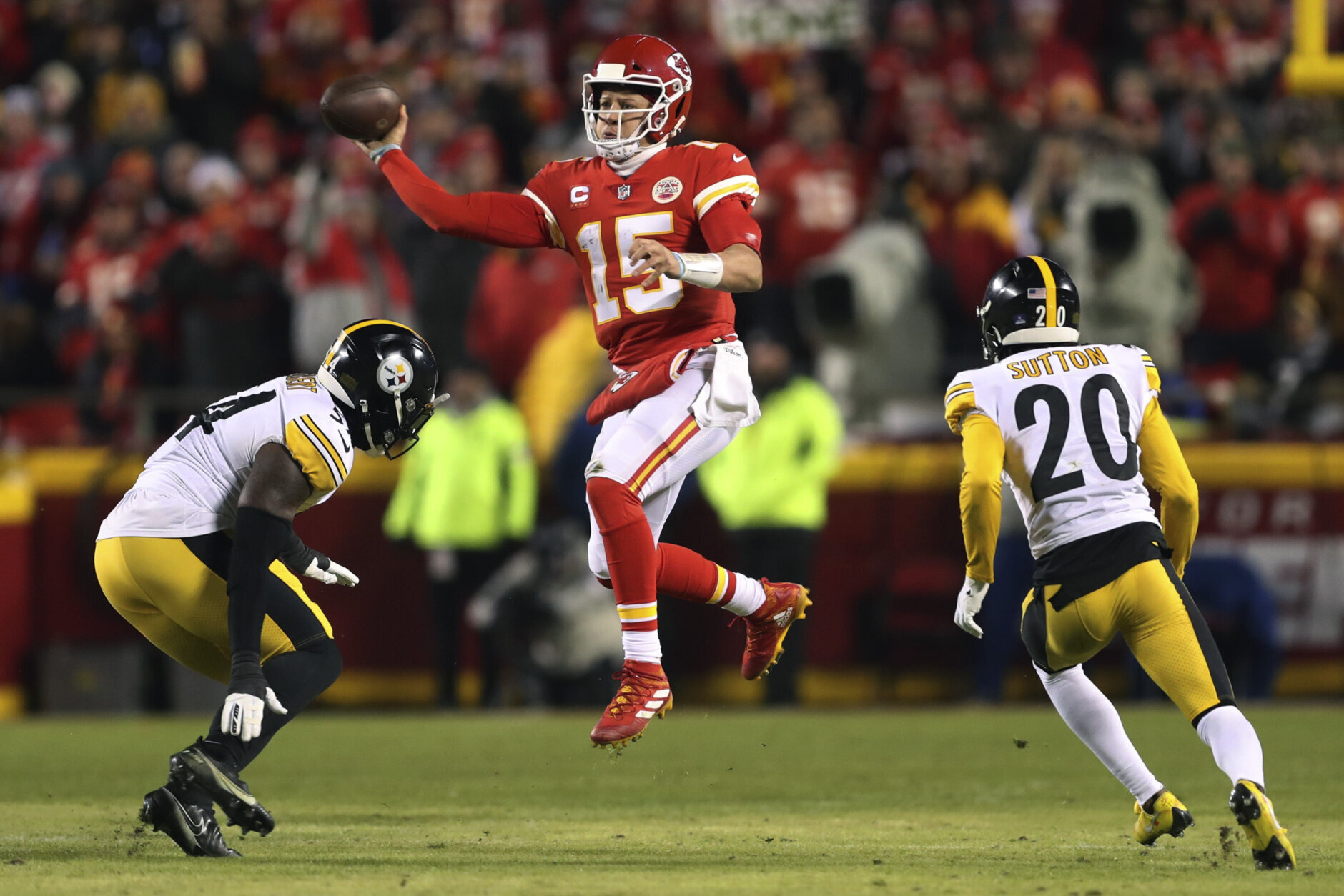 These aren’t your father’s (or even older brother’s) Pittsburgh Steelers.

Ben Roethlisberger’s last game included perhaps his worst first half, and the Steelers surrendered 42 points for the third-straight postseason game. I’m a huge Mike Tomlin fan but there could be some lean years coming to the Steel City if this defense remains inconsistent and the offense doesn’t quickly find an heir apparent to Roethlisberger.

And is there a better show in the sport than Patrick Mahomes? Five straight touchdowns in short order and over 400 yards to upstage Big Ben’s swan song. I can’t wait for the Mahomes-Josh Allen duel next week at Arrowhead Stadium. 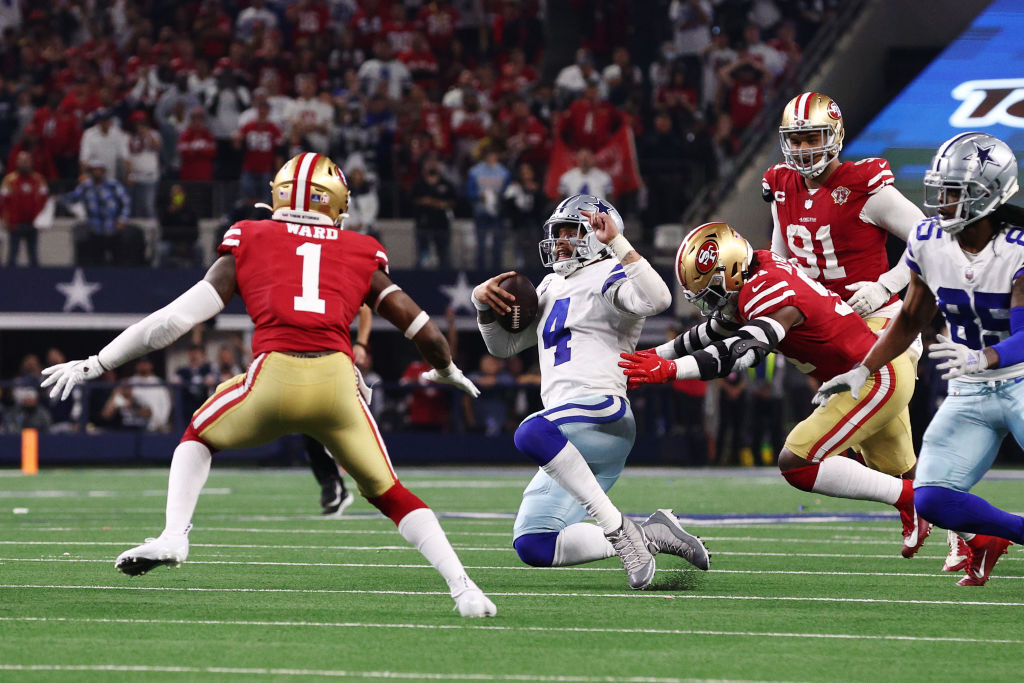 3/6
ARLINGTON, TEXAS — JANUARY 16: Dak Prescott #4 of the Dallas Cowboys scrambles with the ball on the last play of the game against the San Francisco 49ers during the fourth quarter in the NFC Wild Card Playoff game at AT&T Stadium on Jan. 16, 2022 in Arlington, Texas. (Photo by Tom Pennington/Getty Images)

In this classic matchup — the Cowboys-49ers rivalry includes an NFL record-tying eighth postseason meeting, and the first playoff tilt between them since the 1994 NFC Championship Game — San Francisco dominated the first three quarters and looks exactly like the draw Green Bay should be dreading. The Niners’ brand of bully ball travels well, even to Lambeau Field.

Ahem … I laugh in lieu of repeating ‘I told you so’ since I’ve always held the belief that the Mike McCarthy hire was an uninspired choice by Dallas, as evidenced by his chronic late-game failures so bad even a 13-year-old playing Madden would out-strategize him and then doubling down on said failure. Oh, did I mention the postseason franchise-record 14 penalties? The Cowboys aren’t nearly disciplined (or detail-oriented) enough to win a championship, so the beautiful marriage between the most overrated active NFL coach and the league’s most overrated team will keep Big D’s historic drought intact. 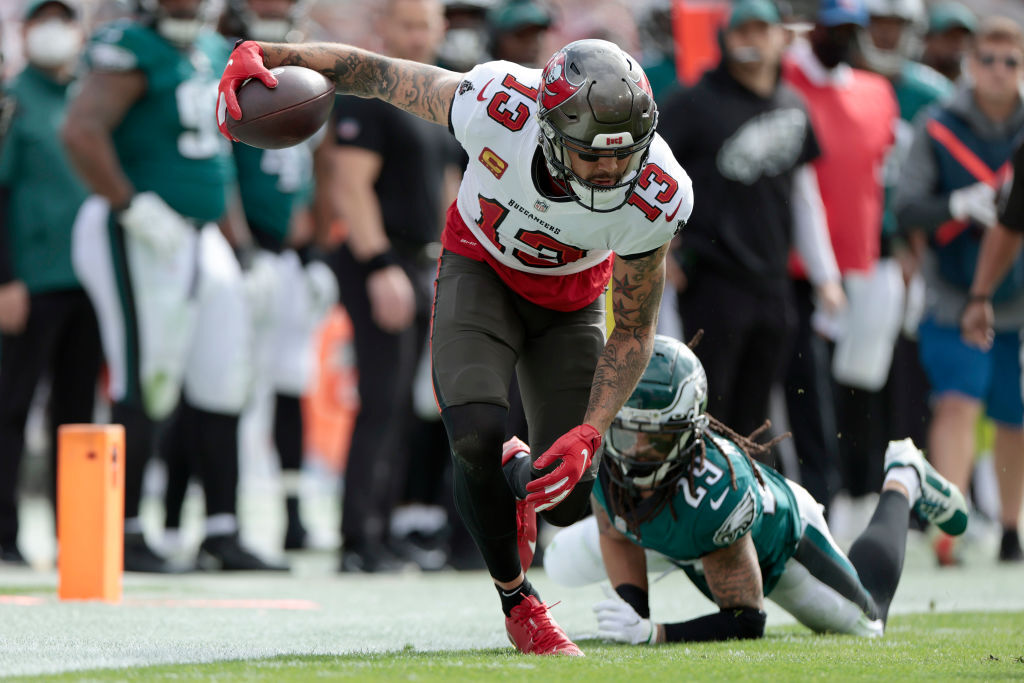 4/6
TAMPA, FLORIDA — JANUARY 16: Mike Evans #13 of the Tampa Bay Buccaneers breaks a tackle against Avonte Maddox #29 of the Philadelphia Eagles during the first quarter in the NFC Wild Card Playoff game at Raymond James Stadium on Jan. 16, 2022 in Tampa, Florida. (Photo by Douglas P. DeFelice/Getty Images)

Is anyone really surprised by this? Philly was 0-6 against playoff teams in the regular season, Jalen Hurts got sonned by the Bucs defense (and quite literally, Tom Brady) and that Eagles rushing attack wasn’t about to get theirs against Tampa a second time. This is Exhibit A in the case against a No. 7 seed in the NFL playoffs. 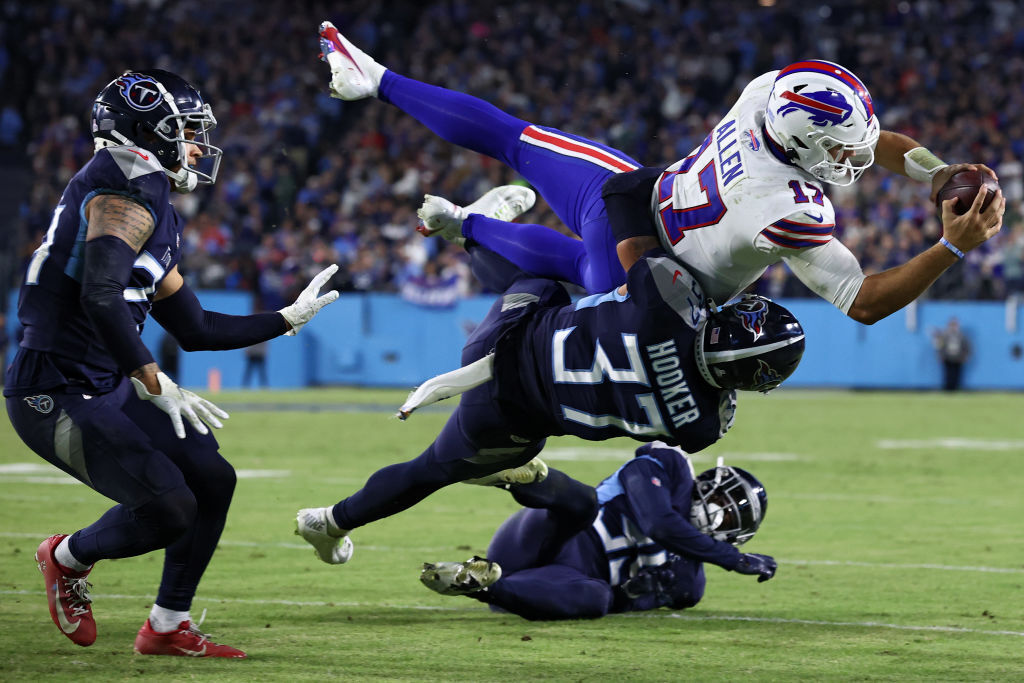 5/6
NASHVILLE, TENNESSEE — OCTOBER 18: Quarterback Josh Allen #17 of the Buffalo Bills is tackled short of the first down marker on third down by safety Amani Hooker #37 of the Tennessee Titans during fourth quarter at Nissan Stadium on Oct. 18, 2021 in Nashville, Tennessee. (Photo by Andy Lyons/Getty Images)

It’s hard to be perfect in pro football … but Buffalo’s offense was just about perfect by scoring touchdowns (some even by accident) on every drive.

The Buffalo Bills just had the NFL’s first ever perfect offensive game.

No punts. No picks. No fumbles lost. No field goals. All touchdowns on every single drive until the kneel downs.

And they did it against a top five defense.

Given all the talk of Viagra before the game and the, um, related paraphernalia thrown on the field during the game, it was stunning to see a Bill Belichick defense so unprecedentedly flaccid. 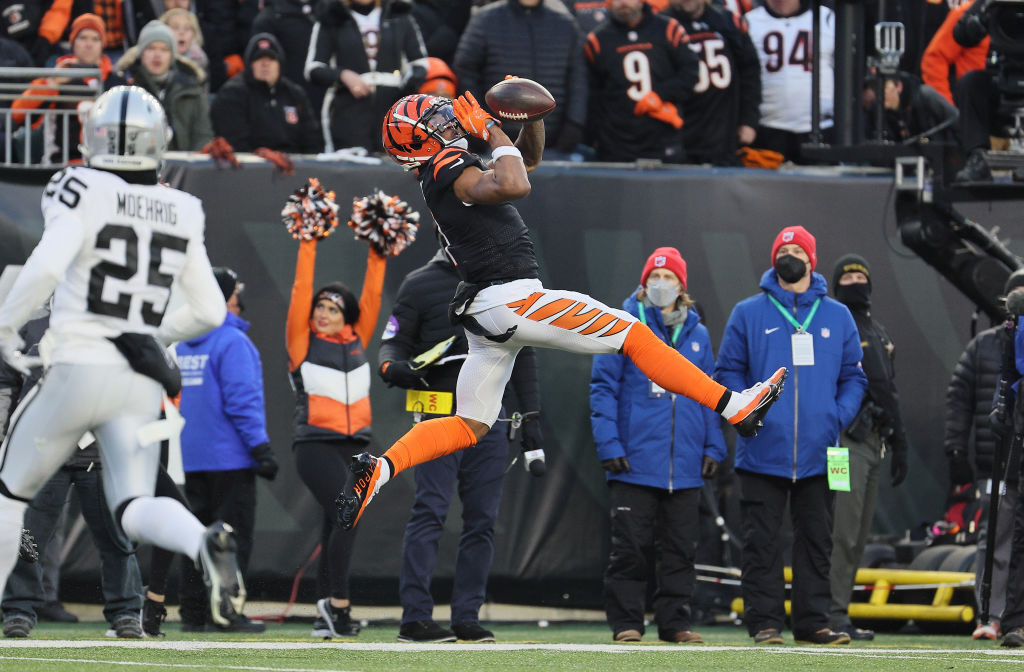 It’s fitting that two main characters from Home Alone were playing this game because that was the top movie in the country the last time Cincinnati celebrated a playoff win.

Seriously though … the beginning of the unstoppable Joe Burrow-Ja’Marr Chase tandem ended the longest active postseason losing streak in professional sports, the first step in the Bengals’ rise from punchline to Super Bowl contender. I doubt that championship run happens this year but bank on it happening in the not-to-distant future.

The only question in Las Vegas is whether head coach Rich Bisacchia gets the interim tag removed. Even with this loss — which guarantees the Raiders will go without a postseason win for 20 years — leading a team that lost its head coach and both of its 2020 first round picks to off-field issues to the playoffs in a loaded AFC deserves to get the gig full time, especially when he’s won over the roster in the process.