You can only find a historic shootout, fitting tributes to legends, questionable tears and dozens of missed kicks in the NFL Week 5 Recap. Trust and believe you’ll be better for it.

On Monday night vs. the Colts, Ravens’ QB Lamar Jackson overcame the largest deficit of his NFL career (19 points) and set the NFL record for completion percentage (86%) in both a 400-yard passing game and a 40-attempt passing game. pic.twitter.com/E5ju49kUWH

Go ahead and give this man the MVP. 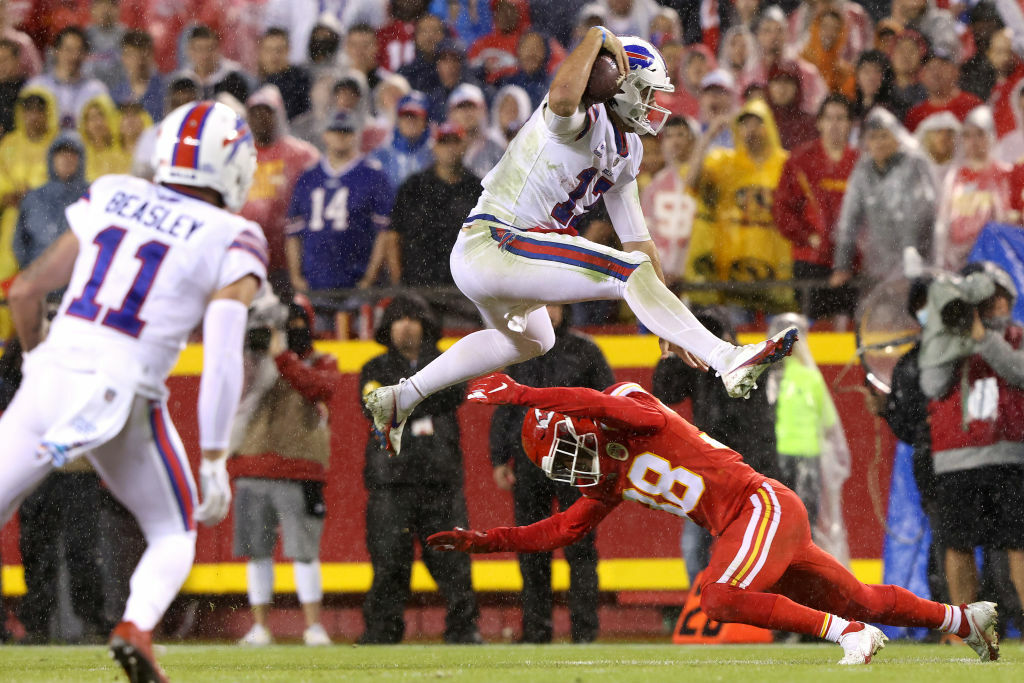 2/16
KANSAS CITY, MISSOURI — Oct. 10: Josh Allen #17 of the Buffalo Bills leaps over the defense of L’Jarius Sneed #38 of the Kansas City Chiefs during the second half of a game at Arrowhead Stadium on Oct. 10, 2021, in Kansas City, Missouri. (Photo by Jamie Squire/Getty Images)

After a start defensively on par with the greatest teams the NFL (and the D.C. area especially) has ever seen, the Buffalo Bills made another statement in stormy Kansas City by steamrolling the Chiefs to avenge their AFC Championship Game loss. They made a clear statement that the best team in the NFL resides in Western New York.

Meanwhile, KC is in some trouble after falling to 2-3. The first place Chargers are red-hot while the Chiefs are the only team in the league to give up 29+ points in every game this season, and the usually superhuman Patrick Mahomes has revealed his mortal nature. We may see a legit shootout at FedEx Field Sunday. 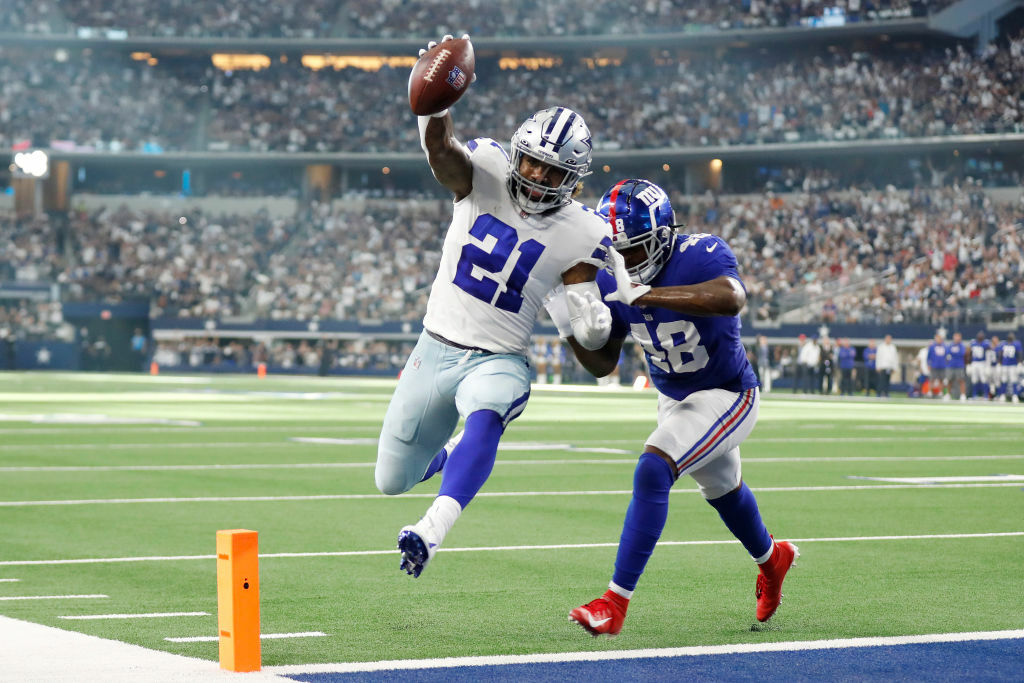 3/16
ARLINGTON, TEXAS — Oct. 10: Ezekiel Elliott #21 of the Dallas Cowboys runs the ball for a touchdown during the third quarter against the New York Giants at AT&T Stadium on Oct. 10, 2021, in Arlington, Texas. (Photo by Wesley Hitt/Getty Images)

I guess Troy Aikman had it right.

Even if the Giants didn’t lose their top three offensive weapons and play like a team in the fourth quarter of a preseason game, Dallas is just that much better than everyone else in the NFC East. It’s not a matter of whether the Cowboys win the division — it’s how early they clinch it and whether they can win enough overall games to get in on the race for home-field advantage. 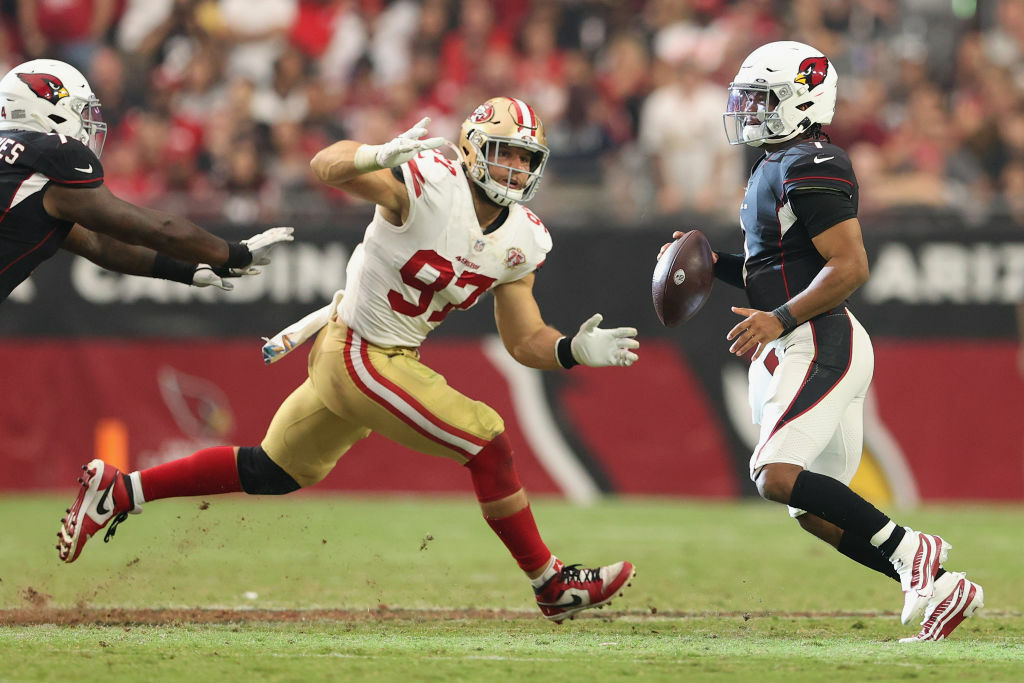 4/16
GLENDALE, ARIZONA — Oct. 10: Quarterback Kyler Murray #1 of the Arizona Cardinals looks to pass under pressure from defensive end Nick Bosa #97 of the San Francisco 49ers during the second half of the NFL game at State Farm Stadium on Oct. 10, 2021, in Glendale, Arizona. The Cardinals defeated the 49ers 17-10. (Photo by Christian Petersen/Getty Images)

Even though this defensive struggle put a dent in Arizona’s record-setting offensive pace, Kyler Murray and the underrated Cardinals defense led the franchise to its first 5-0 start since 1974. If Murray can kick butt like Bruce Lee in Cleveland, it might be time to take this team seriously.

And don’t beat up on Trey Lance, the fourth-youngest QB in the Super Bowl era, for his mediocre performance. The last baby 49er to struggle in his maiden voyage turned out pretty good. 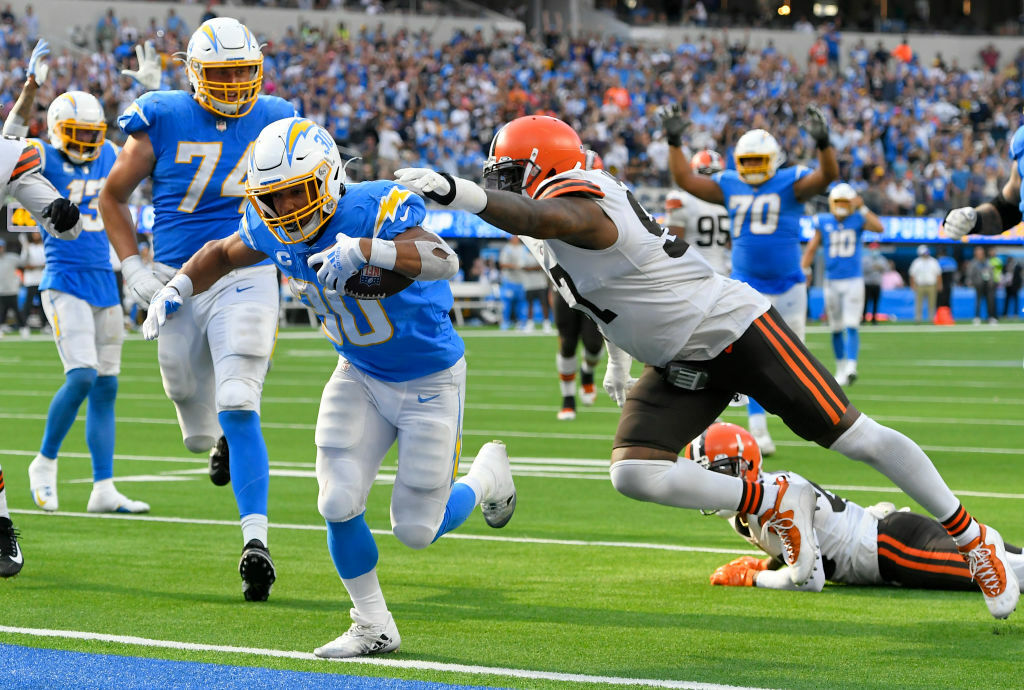 5/16
INGLEWOOD, CALIFORNIA — Oct. 10: Austin Ekeler #30 of the Los Angeles Chargers avoids a tackle by Malik Jackson #97 of the Cleveland Browns to score a touchdown during the fourth quarter at SoFi Stadium on Oct. 10, 2021, in Inglewood, California. (Photo by John McCoy/Getty Images)

Remember when the Chargers were the hard luck team that lost a bunch of close games? Well, if this win to improve to 4-1 for the first time in seven years hasn’t reversed that yearslong trend, I’m not sure what does. Especially given how rare it is to beat a team that was as dominant as Cleveland offensively.

The Browns scored 42 points, had 532 yards with 0 turnovers. 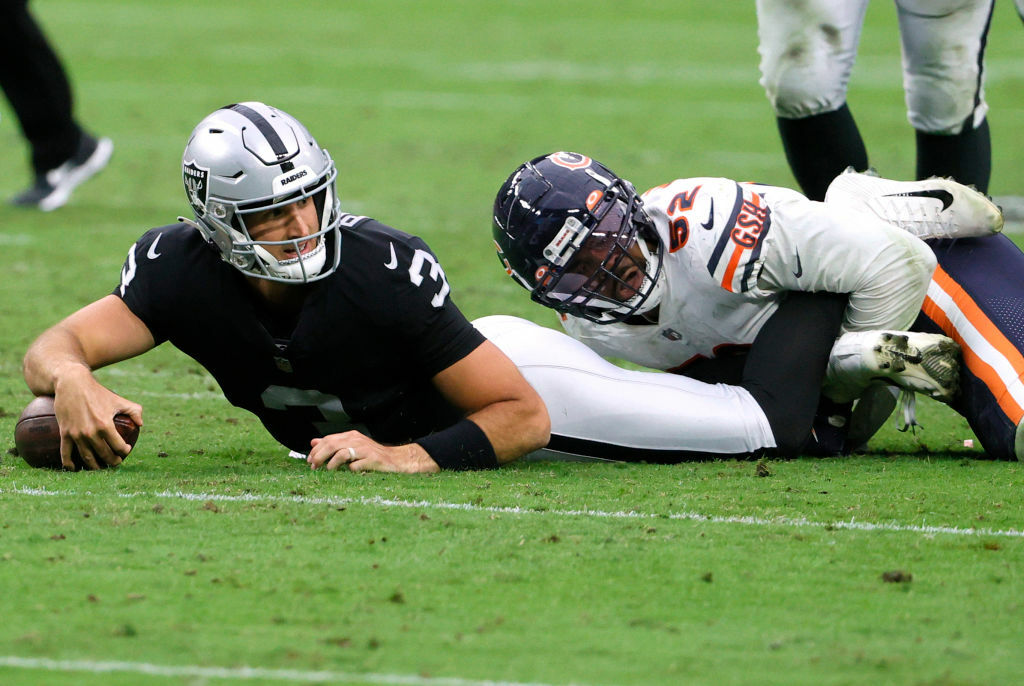 6/16
LAS VEGAS, NEVADA — Oct. 10: Nathan Peterman #3 of the Las Vegas Raiders is tackled by Khalil Mack #52 of the Chicago Bears during the second half at Allegiant Stadium on Oct. 10, 2021, in Las Vegas, Nevada. (Photo by Ethan Miller/Getty Images)

Khalil Mack’s (sort of) return against his former team was a success, notching eight tackles and a sack against the coach, who immediately (and unceremoniously) dealt him upon arrival. So it’s only fitting that Mack was the first to kick Jon Gruden while he was down because of another lousy choice. 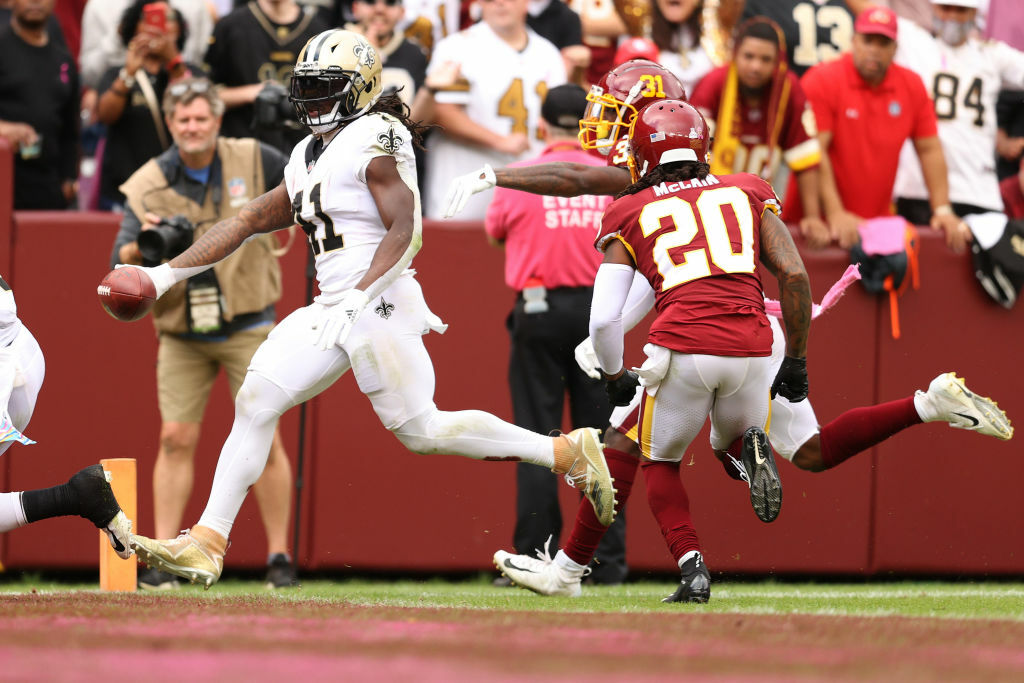 7/16
LANDOVER, MARYLAND — Oct. 10: Alvin Kamara #41 of the New Orleans Saints scores a touchdown during the second half against the Washington Football Team at FedExField on Oct. 10, 2021, in Landover, Maryland. (Photo by Patrick Smith/Getty Images)

If this was the Washington defense getting close to living up to expectations, they’re going loooove what Patrick Mahomes does to them on Sunday. Hopefully, FedEx Field’s scoreboard can accommodate a third digit on the visitor’s side because this could get ugly fast. Bet the over on everything.

Thank you, Jalen Hurts. Carolina and the rest of the NFL needs to remember Cam Newton. 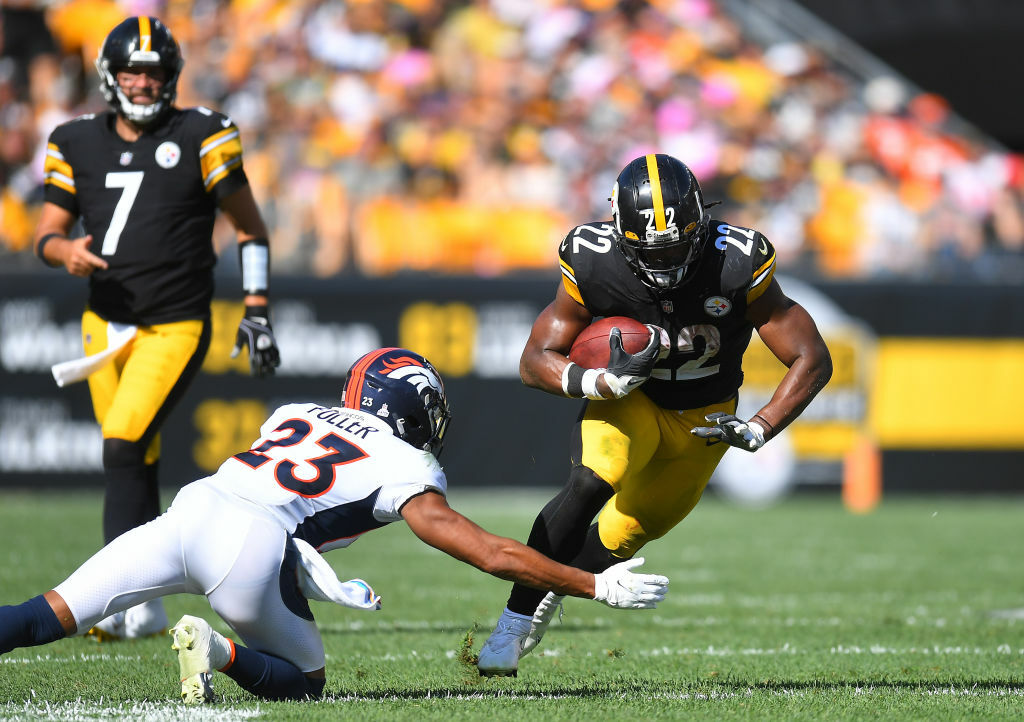 9/16
PITTSBURGH, PENNSYLVANIA — Oct. 10: Najee Harris #22 of the Pittsburgh Steelers runs with the ball during the third quarter at Heinz Field on Oct. 10, 2021, in Pittsburgh, Pennsylvania. (Photo by Joe Sargent/Getty Images)

Pittsburgh finally put together the kind of balanced offensive attack they’ve lacked for years. Another performance like Sunday’s against the Russell Wilson-less Seahawks should get the Steelers right back in the AFC North race. 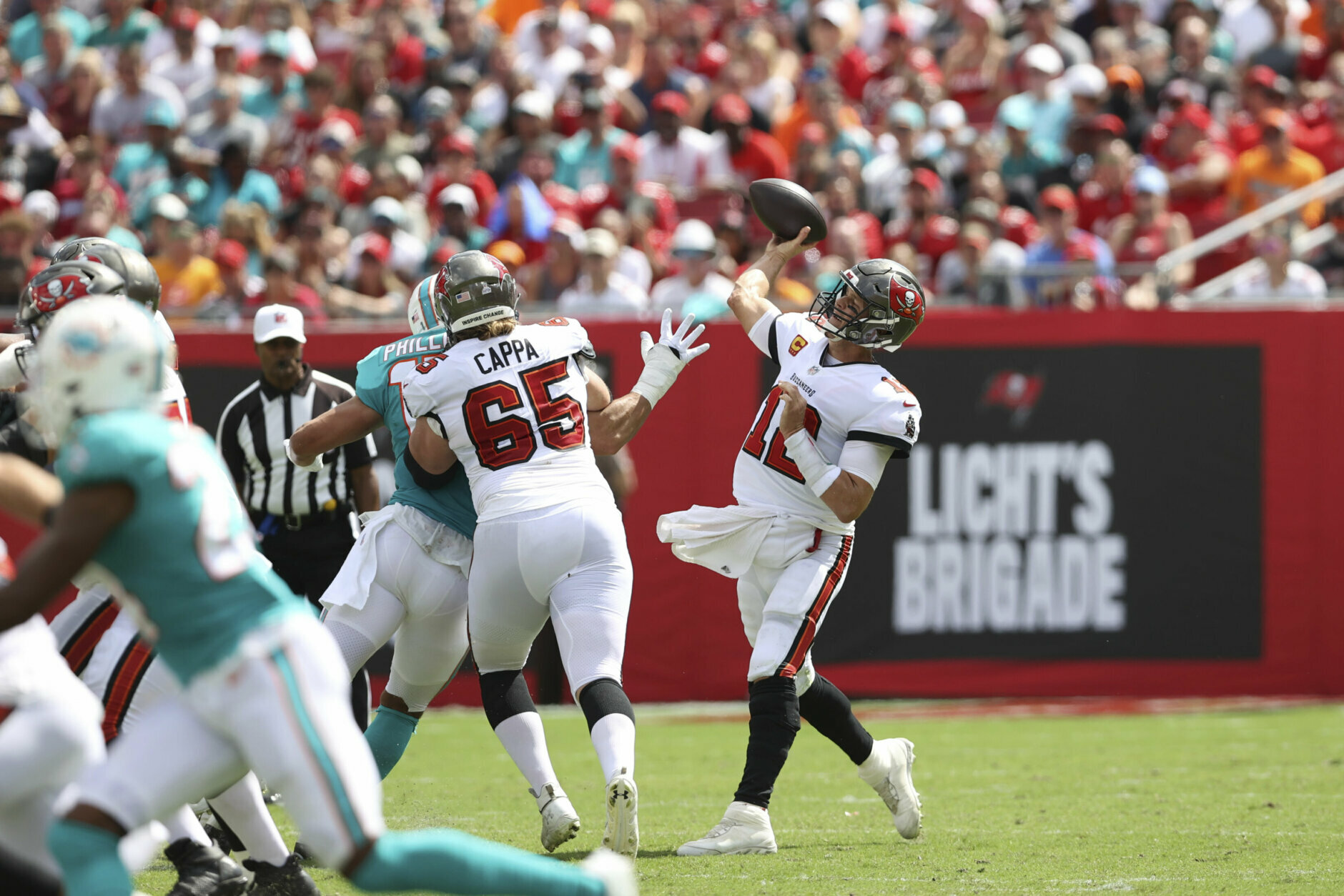 10/16
Tampa Bay Buccaneers quarterback Tom Brady (#12) throws a pass against the Miami Dolphins during the first half of an NFL football game Sunday, Oct. 10, 2021, in Tampa, Fla. (AP Photo/Mark LoMoglio)

I don’t know what’s more incredible: Tom Brady still playing at such a ridiculously high level at age 44, or the fact that he’s still accomplishing stuff he never has before in year 22. Tom Terrific had his first 400-yard, 5-TD game of his career — and did it with a bum thumb. This man ain’t human. 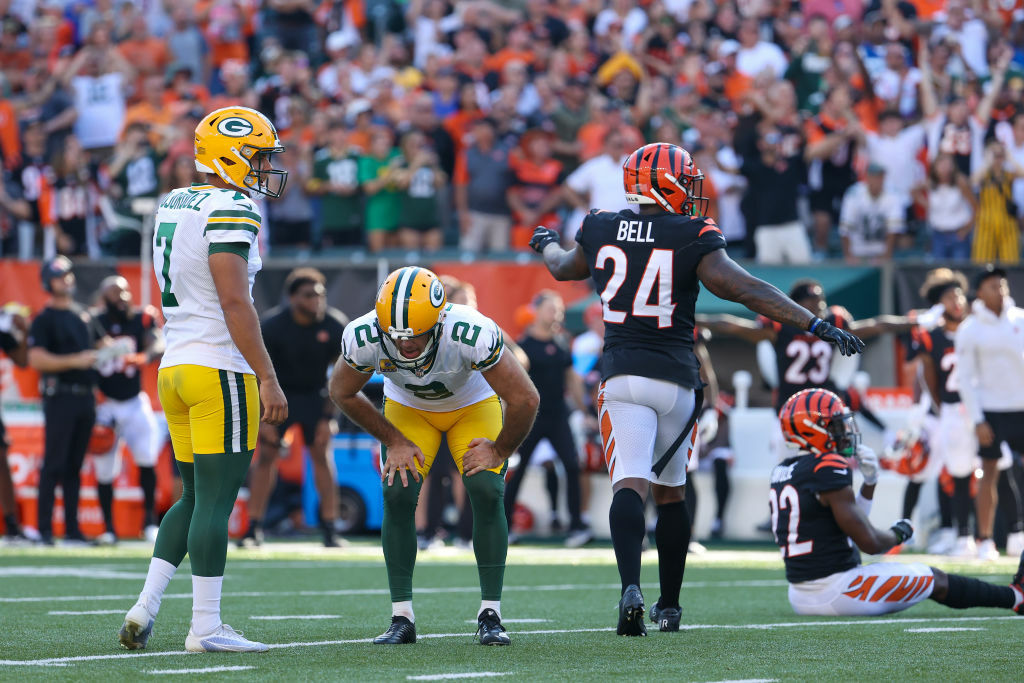 11/16
CINCINNATI, OHIO — Oct. 10: Mason Crosby #2 of the Green Bay Packers reacts after missing a field goal during overtime against the Cincinnati Bengals at Paul Brown Stadium on Oct. 10, 2021, in Cincinnati, Ohio. (Photo by Andy Lyons/Getty Images)

The only thing surprising about Mason Crosby’s “when at first you don’t succeed, try, try (and try, try) again” routine in Cincinnati is that Mason Crosby is somehow still Green Bay’s kicker 15 years running. This game was damn near half the reason for the worst week of kicking in NFL history. 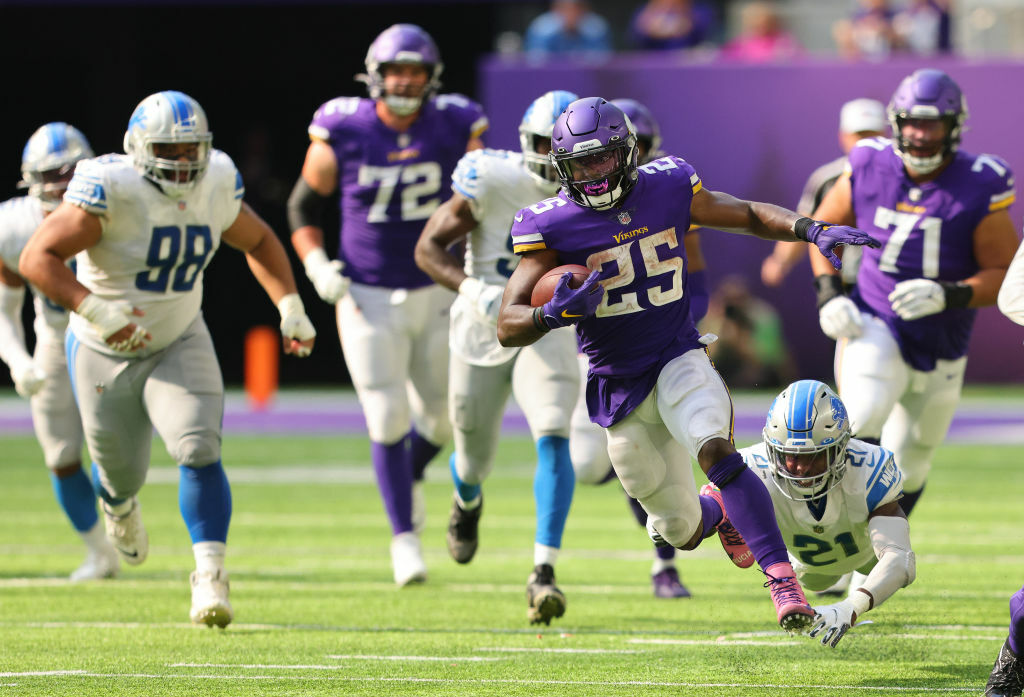 12/16
MINNEAPOLIS, MINNESOTA — Oct. 10: Alexander Mattison #25 of the Minnesota Vikings runs the ball during the second half against the Detroit Lions at U.S. Bank Stadium on Oct. 10, 2021, in Minneapolis, Minnesota. (Photo by Adam Bettcher/Getty Images)

Dan Campbell went from threatening kneecaps to crying at the podium after his team stayed winless through five games. Was he channeling his inner Dick Vermeil or Red from Friday? Detroit’s performance against Cincinnati on Sunday will provide the answer. 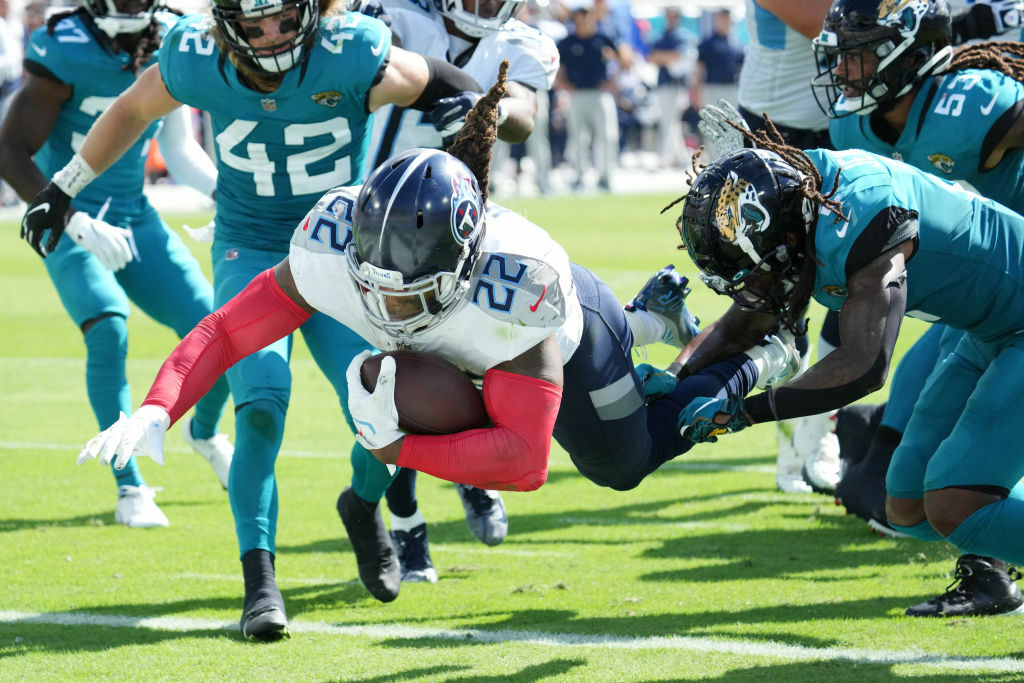 13/16
JACKSONVILLE, FLORIDA — Oct. 10: Derrick Henry #22 of the Tennessee Titans runs for a touchdown during the third quarter against the Jacksonville Jaguars at TIAA Bank Field on Oct. 10, 2021, in Jacksonville, Florida. (Photo by Mark Brown/Getty Images)

Jacksonville is the third team in NFL history to lose 20 straight games. They have a coach losing the locker room so rapidly even Bobby Petrino’s head is spinning and can’t seem to be competitive, let alone good. I believe making an in-season coaching change is rarely warranted, but the Jaguars need to own their mistake sooner rather than later and do a hard reset, like yesterday. 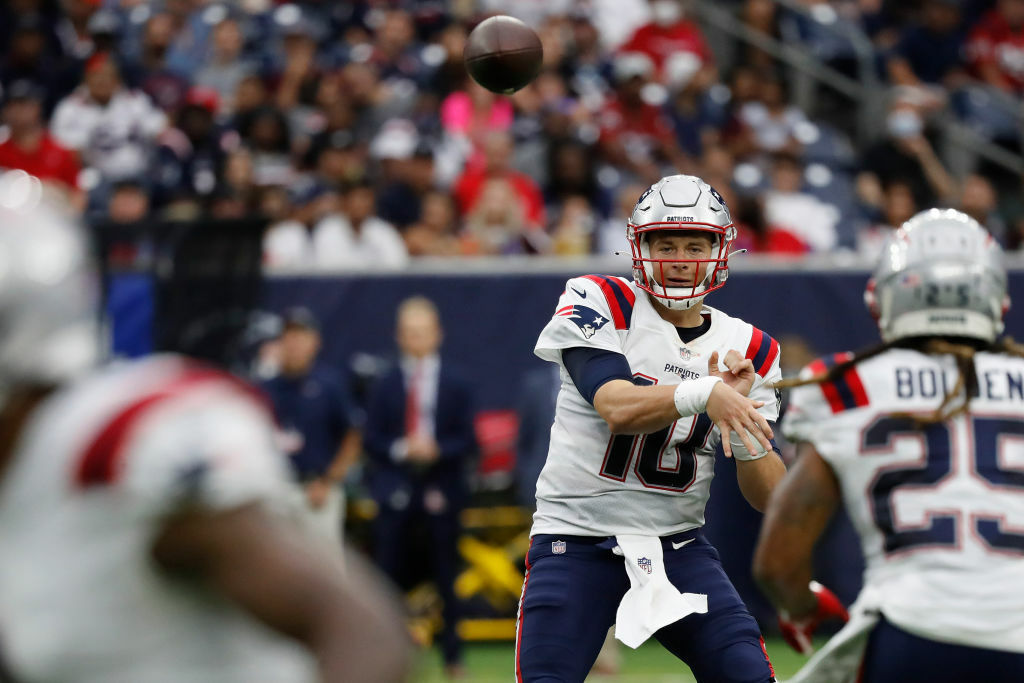 There have been just 2 rookies that have thrown 3 Pass TD against the Patriots since Bill Belichick took over as head coach, Davis Mills and Russell Wilson. pic.twitter.com/iUbYW7X8A3

And, I’ll add that New England’s close loss to the best team in the NFL might have been better than this comeback win against perhaps the worst team in the league. It’s hard to get a read on these Patriots. 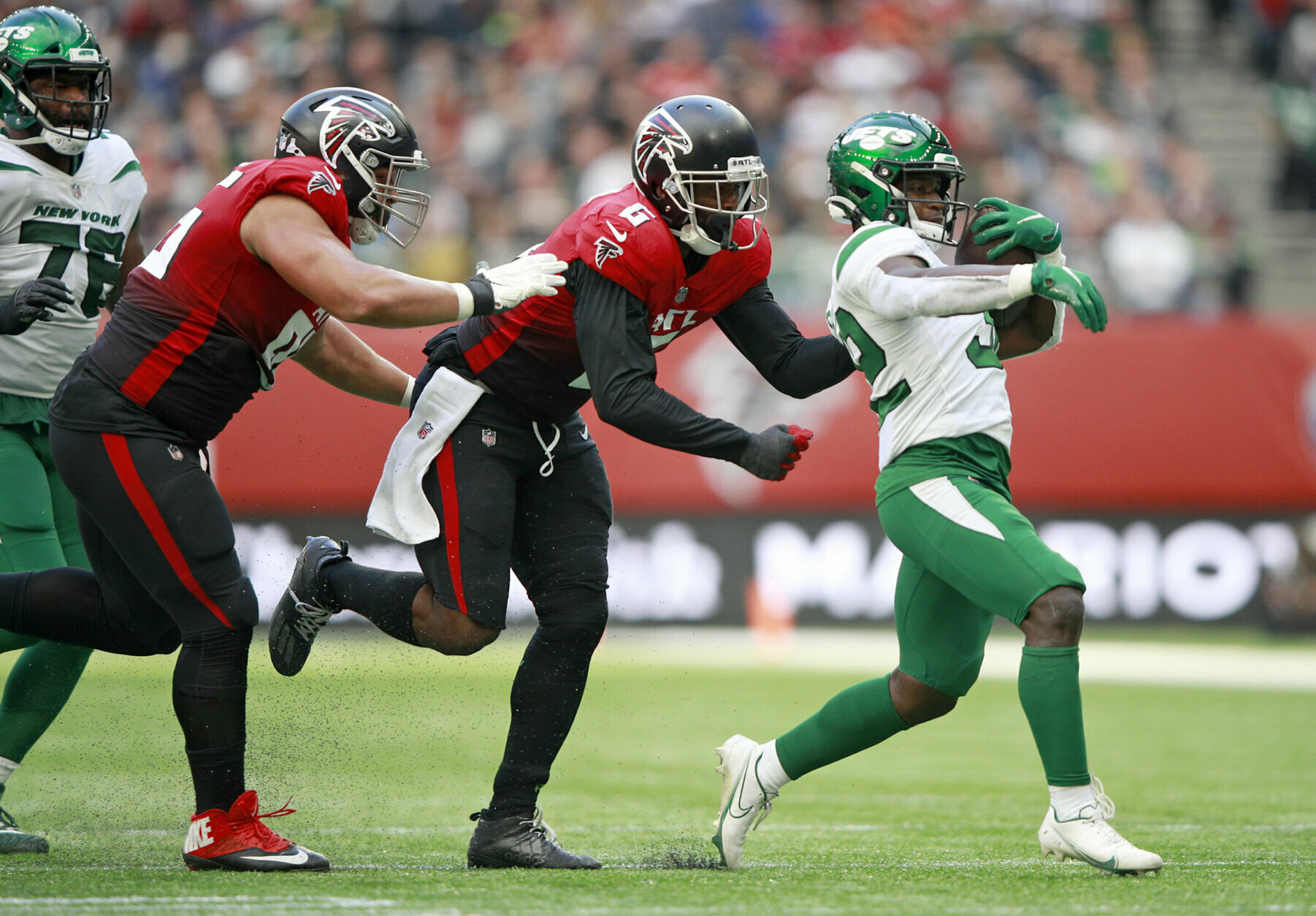 15/16
New York Jets running back Michael Carter (#32) tries to get away from Atlanta Falcons defensive end Dante Fowler Jr. (6) during the first half of an NFL football game between the New York Jets and the Atlanta Falcons at the Tottenham Hotspur stadium in London, England, Sunday, Oct. 10, 2021. (AP Photo/Ian Walton)

The Jets in the first quarter this season:

Expand it to the full first half, and Gang Green is being outscored 75-13. The NFL continues to export crappy football to England. 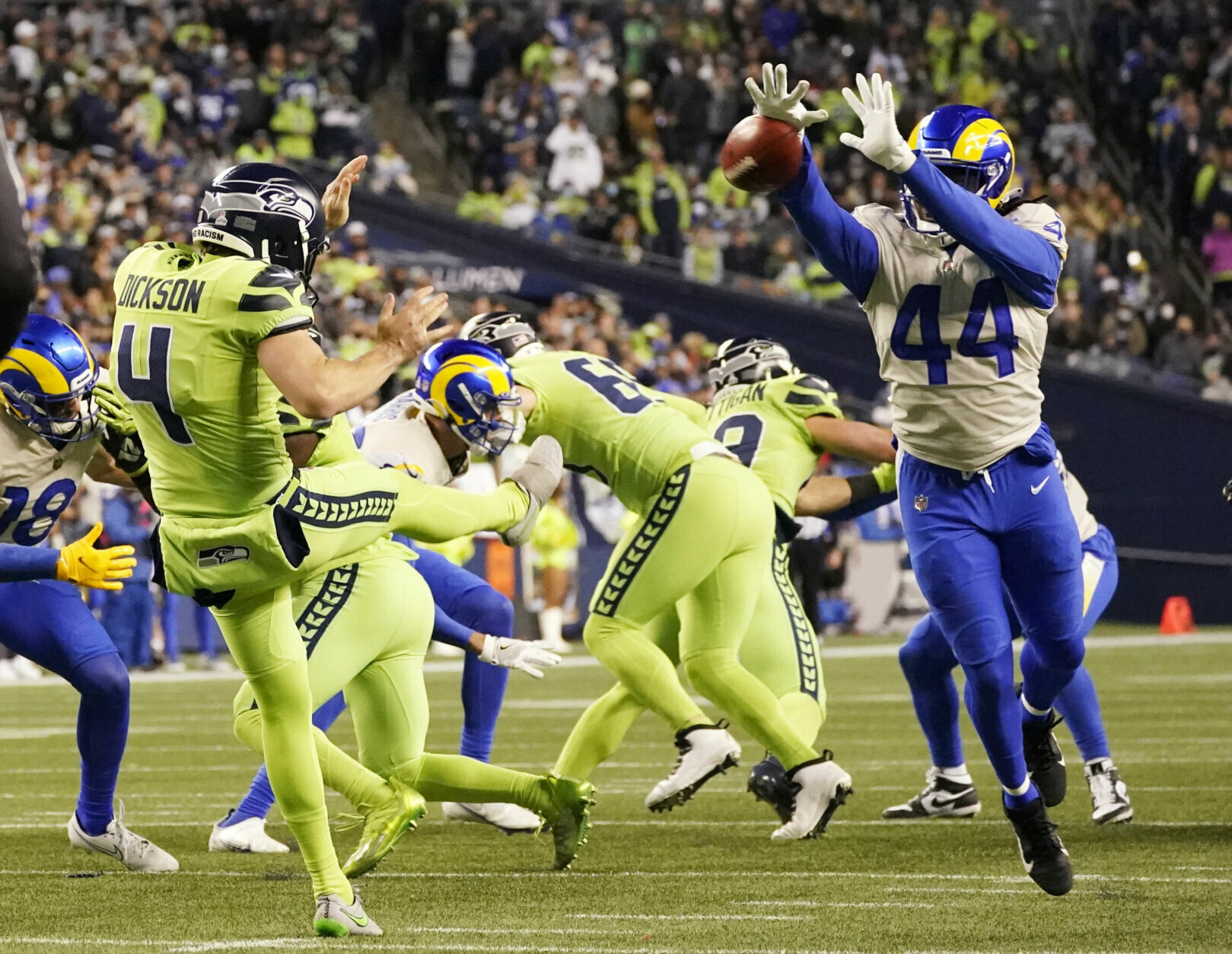 The biggest deal from this game is that Russell Wilson’s 149-game Ironman streak is almost assuredly over and Seattle’s season is in jeopardy if Russ is down for closer in the eight-week timeline. But the deal nobody’s talking about is the status of the double punt rule. This could be a game-changer if allowed to continue.

OLB Dupree back for Titans vs. Bills after missing 3 games

Crackdown on taunting is working the way the NFL intended