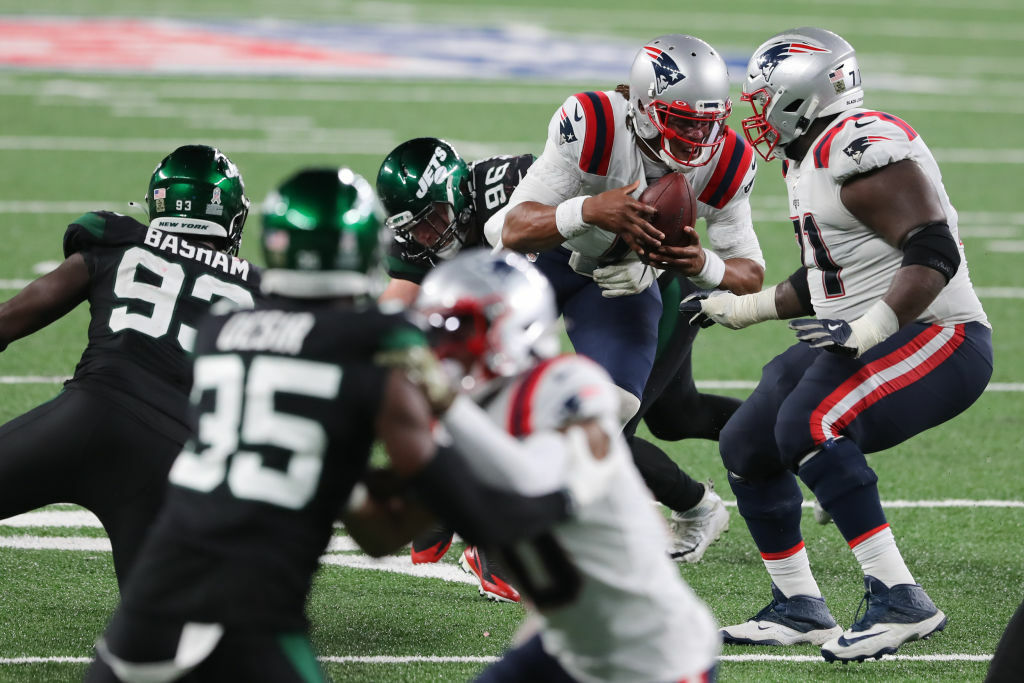 1/14
EAST RUTHERFORD, NEW JERSEY – NOVEMBER 09: Cam Newton #1 of the New England Patriots attempts to carry for a first down during the second half against the New York Jets at MetLife Stadium on November 09, 2020 in East Rutherford, New Jersey. (Photo by Elsa/Getty Images)

If Adam Gase thinks Bill Belichick is so funny, then presiding over the first 0-9 start in Jets history to clinch the franchise’s 30th losing season must be hilarious. When Gang Green comes back from their bye, they should do so with Gregg Williams as the interim head coach.

And my, how the mighty have fallen in New England. Yes, the Patriots dominated the second half time of possession (21:39 out of 30 minutes) and pulled out a come-from-behind win to end their four-game losing skid. But the level of late-game heroics required to barely beat Baltimore discards like Joe Flacco and Breshad Perriman is a really bad sign going into a short-week game against the present-day Ravens. 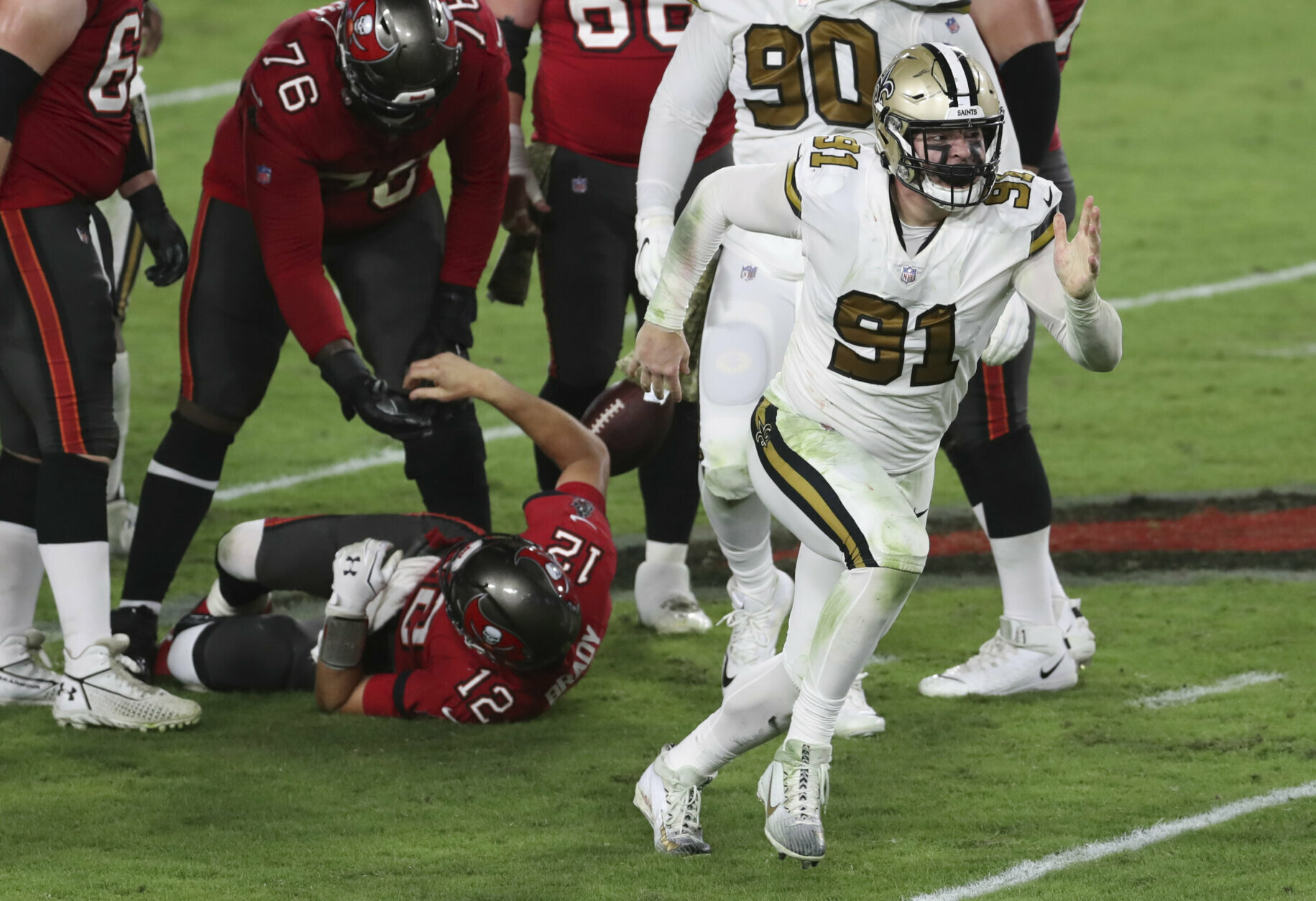 I certainly didn’t see this coming. Drew Brees snatching the all-time passing touchdown record back from Tom Brady in his own house was the nicest thing that happened — Brady’s new toy (Antonio Brown) was a non-factor in his Bucs debut, the GOAT was battered and beaten en route to the worst loss of his career and the first time in his career he was swept at the hands of a division opponent. This ain’t the AFC East, Tommy. Don’t be surprised if Carolina reminds him of that next week, too. 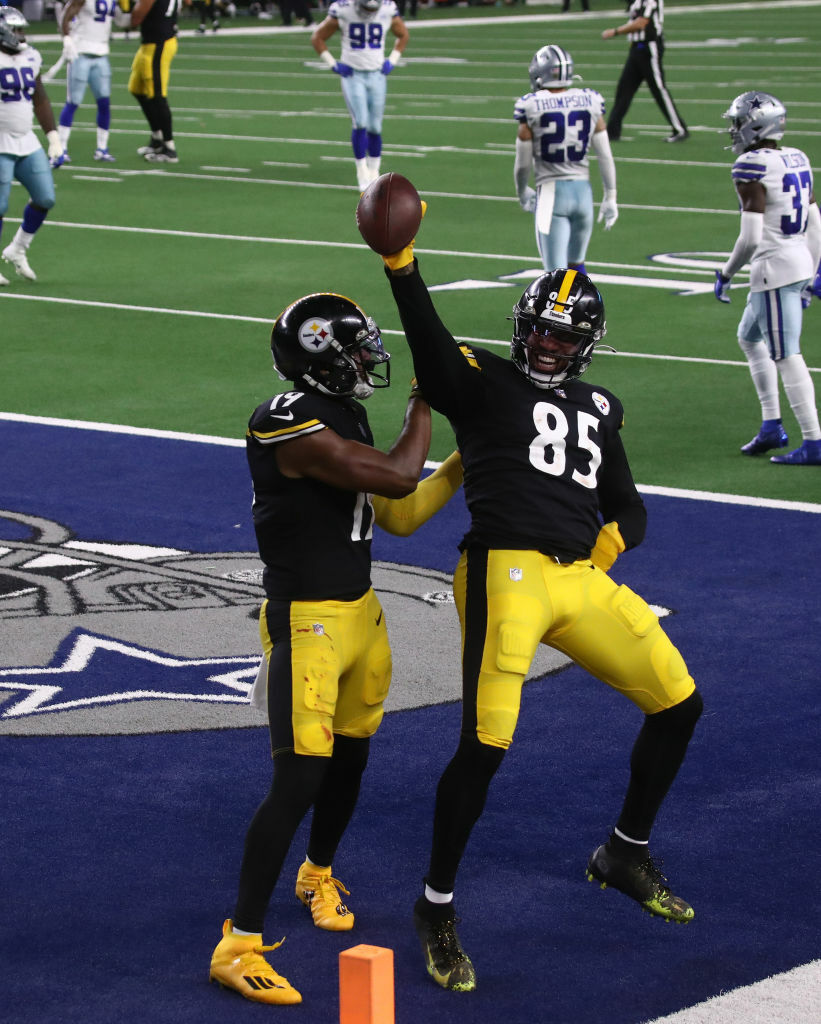 3/14
ARLINGTON, TEXAS — NOVEMBER 08: Eric Ebron #85 of the Pittsburgh Steelers celebrates a touchdown with JuJu Smith-Schuster #19 against the Dallas Cowboys in the fourth quarter at AT&T Stadium on November 08, 2020 in Arlington, Texas. (Photo by Ronald Martinez/Getty Images)

I mean, if Garrett Gilbert is Nick Foles, it’s “Everywhere Except Philly” Nick Foles, not 2013 or 2017 postseason Nick Foles.

Give Dallas credit for playing Pittsburgh close, but the undefeated Steelers — off to their best start in their illustrious franchise’s history — are just on another level. I can’t wait to see this “team of destiny” label put to the test down the stretch. 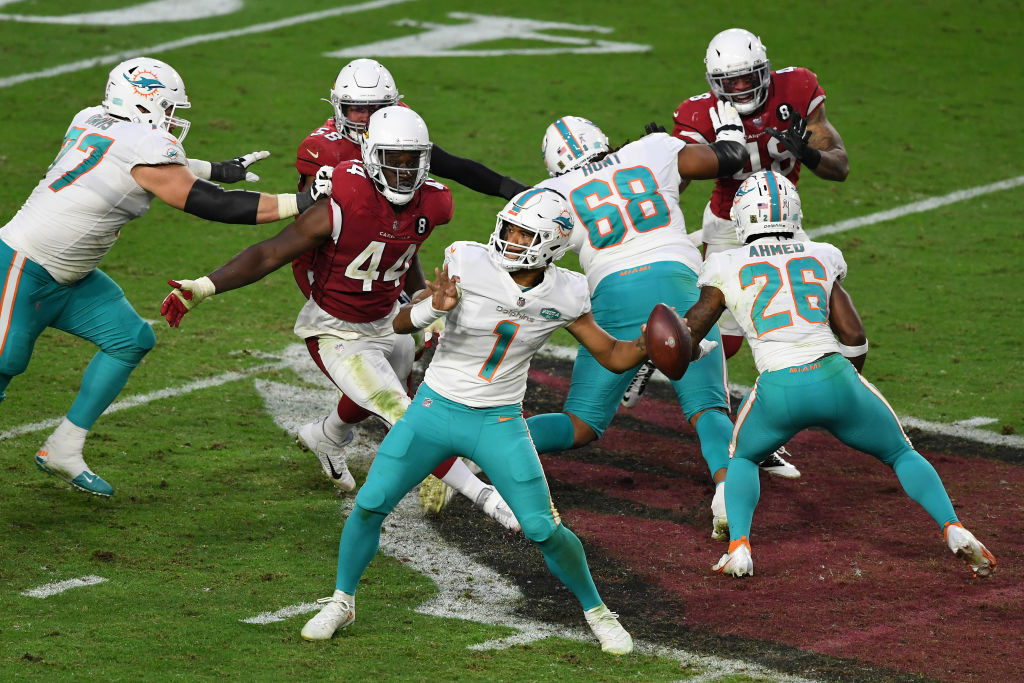 4/14
GLENDALE, ARIZONA — NOVEMBER 08: Tua Tagovailoa #1 of the Miami Dolphins throws an incomplete pass during the second half against the Arizona Cardinals at State Farm Stadium on November 08, 2020 in Glendale, Arizona. The Miami Dolphins won 34-31. (Photo by Norm Hall/Getty Images)

I sincerely hope this is a future Super Bowl matchup. Kyler Murray notched his first double triple in a near-perfect passing performance, and Tua Tagovailoa was outstanding in a huge road win that matches their 2019 win total midway through 2020. If Miami stays on course for a playoff berth, Tua will have passed his test with flying colors and the Dolphins can finally build around a true franchise quarterback. 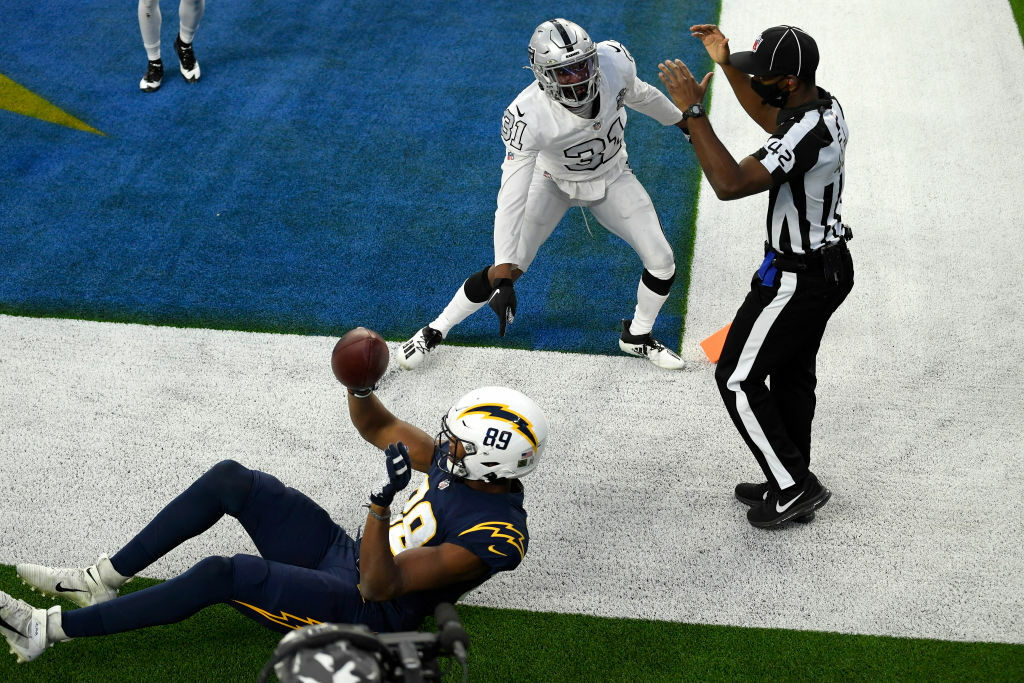 5/14
INGLEWOOD, CALIFORNIA — NOVEMBER 08: Donald Parham #89 of the Los Angeles Chargers celebrates a fourth quarter touchdown catch while Isaiah Johnson #31 of the Las Vegas Raiders objects at SoFi Stadium on November 08, 2020 in Inglewood, California. The play was originally called a touchdown but was overturned on replay to give the Raiders a 31-26 win, (Photo by Harry How/Getty Images)

Another week, another way for the Los Angeles Chargers to lose. When the Bolts and Falcons play Dec. 13, their collective losing energy might implode SoFi Stadium Dark Knight Rises style. 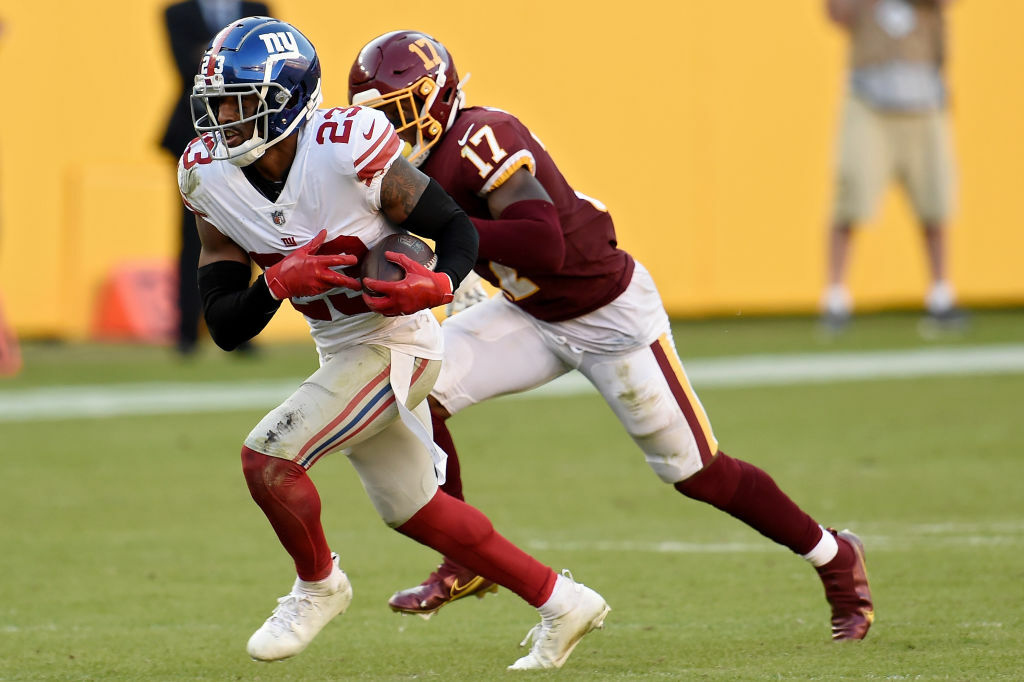 6/14
LANDOVER, MARYLAND — NOVEMBER 08: Logan Ryan #23 of the New York Giants runs with the ball after making an interception in the fourth quarter against the Washington Football Team at FedExField on November 08, 2020 in Landover, Maryland. (Photo by Greg Fiume/Getty Images)

On the same day we lost famed Washington fan Alex Trebek (and he was quite the fan), the Burgundy and Gold lost yet another quarterback to a devastating leg injury and literally fumbled their way to an 0-4 record against a Giants team that’s 2-19 against everyone else the last two seasons. But it’s 2020, y’all. Let’s celebrate Logan Ryan’s game-clinching pick to cap a harrowing week and not take the NFC East too seriously since none of its four teams are either. 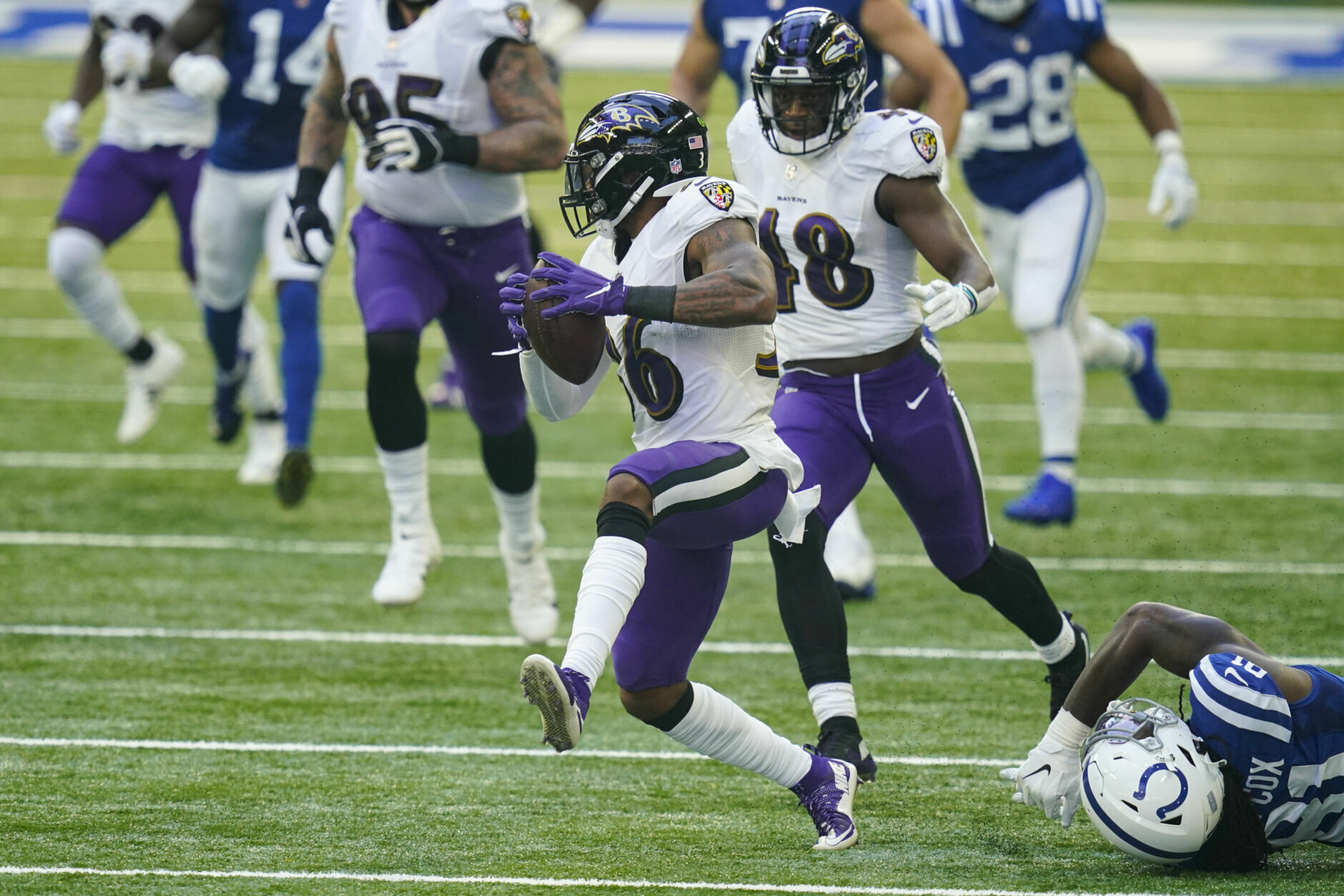 7/14
Baltimore Ravens strong safety Chuck Clark (36) heads to the end zone for a touchdown on a fumble recovery against the Indianapolis Colts in the first half of an NFL football game in Indianapolis, Sunday, Nov. 8, 2020. (AP Photo/Darron Cummings)

Ten straight road wins. A whopping 31 straight games scoring 20+ points and rushing for over 100 yards, 21 consecutive games with a takeaway and an NFL-best 12th defensive touchdown since 2018. Lamar Jackson slumping but also etching his name alongside Dan Marino’s. Has any team been as simultaneously impressive and underwhelming as Baltimore? 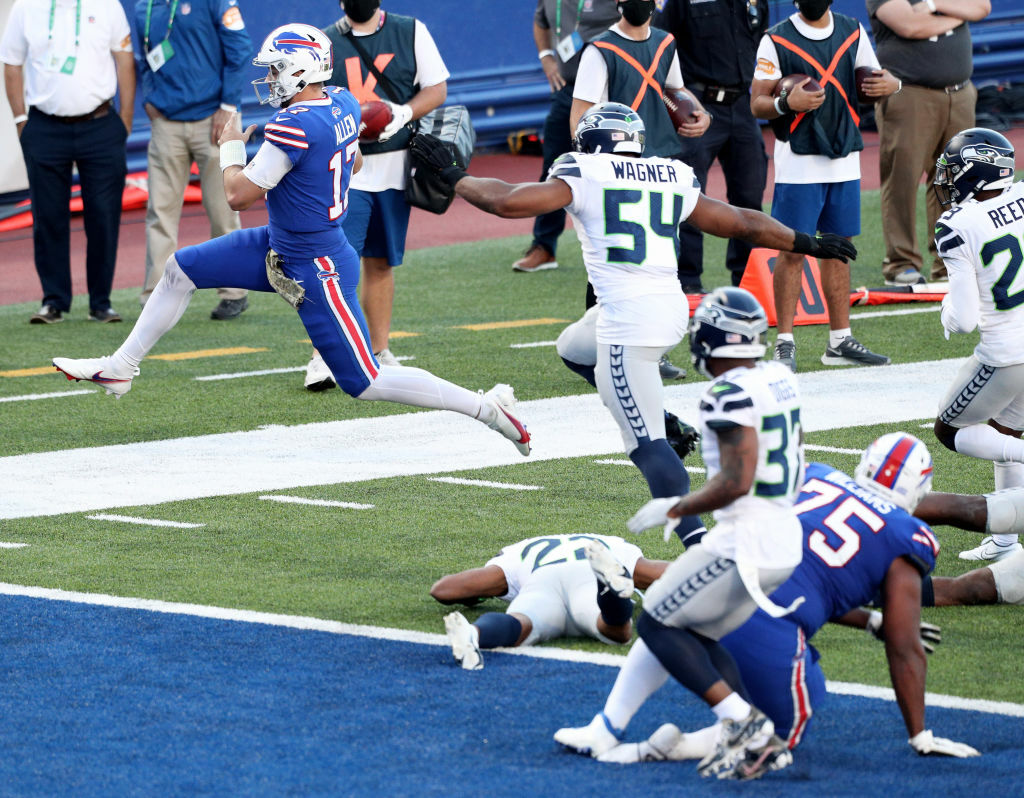 8/14
ORCHARD PARK, NEW YORK — NOVEMBER 08: Josh Allen #17 of the Buffalo Bills leaps to score a touchdown during the second half against the Seattle Seahawks at Bills Stadium on November 08, 2020 in Orchard Park, New York. (Photo by Bryan M. Bennett/Getty Images)

How’s this for timing: Seattle gave Pete Carroll a contract extension, and then his unrecognizable Seahawks defense gave up the most points in the 11-year Carroll era. This is worst-timed extension since Donovan McNabb’s in Washington.

Meanwhile, 7-2 Buffalo is enjoying its best start since 1993 thanks to Josh Allen outdueling Wilson despite a heavy heart following a family tragedy. It’s starting to feel like the Bills are something special. 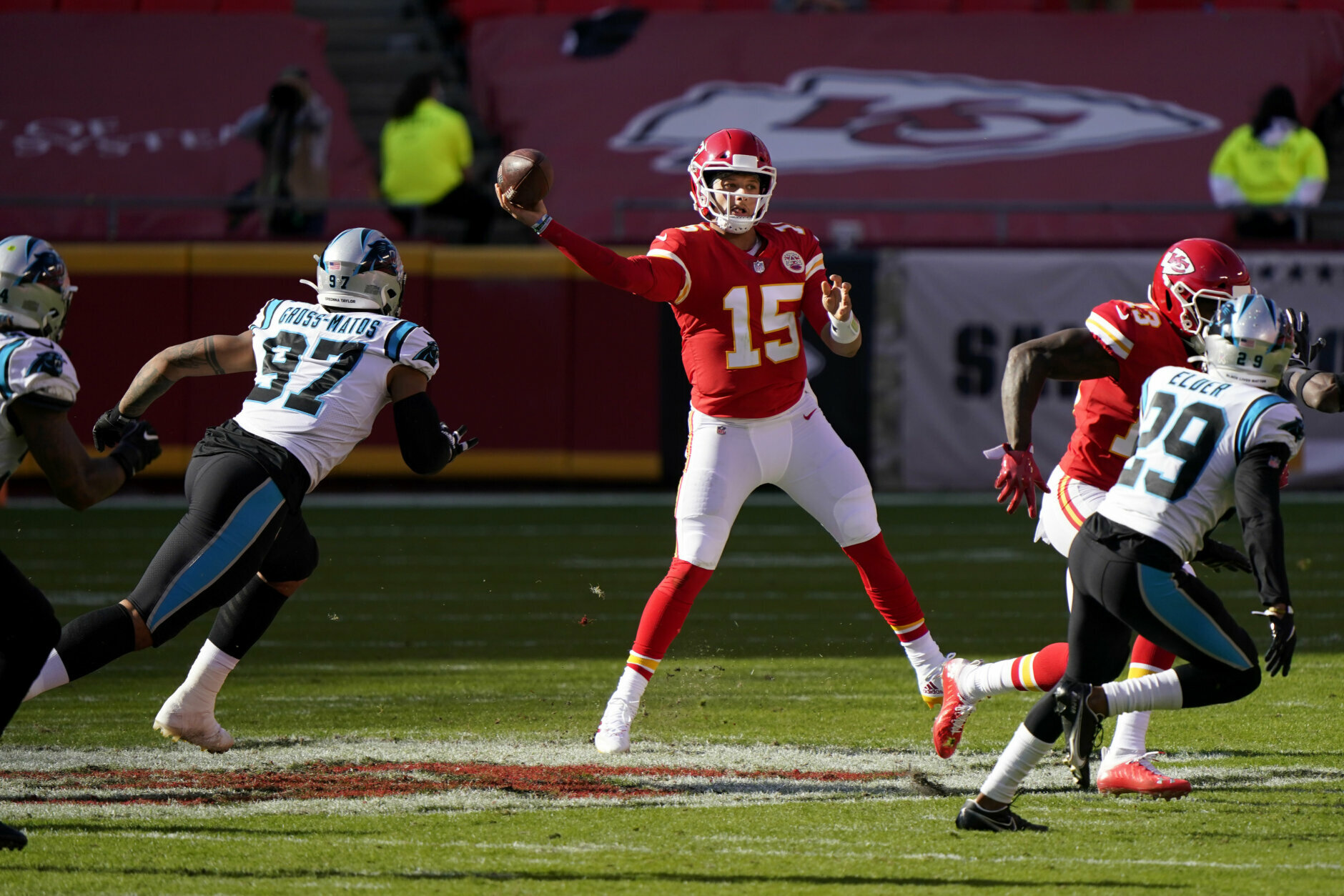 Patrick Mahomes is the fastest to 100 touchdown passes (40 games) in NFL history, and if he continues this tear and Russell Wilson shoots a couple more blanks trying to overcompensate for Seattle’s defense, Mahomes will grab his second MVP. Book it. 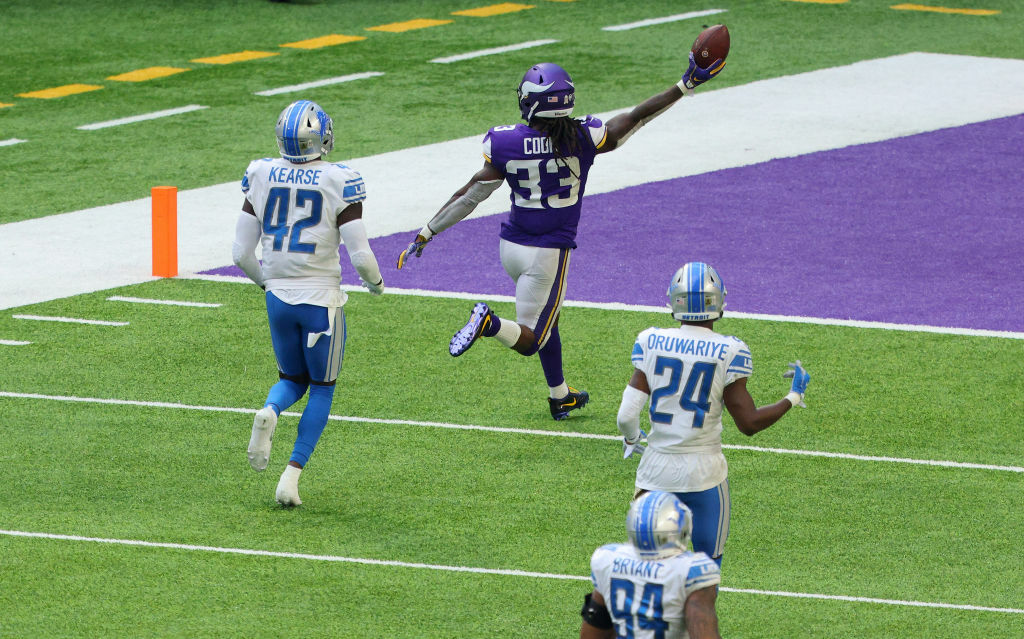 10/14
MINNEAPOLIS, MINNESOTA — NOVEMBER 08: Dalvin Cook #33 of the Minnesota Vikings runs the ball in for a touchdown against the Detroit Lions at U.S. Bank Stadium on November 08, 2020 in Minneapolis, Minnesota. (Photo by Adam Bettcher/Getty Images)

If Everson Griffen’s feelings were hurt before, he has really gotta be smarting after getting run over by now-league-leading rusher Dalvin Cook and watching Kirk Cousins get right at Detroit’s expense. Seriously, Lions … Matt Patricia is your king? Give Jim Caldwell his apology. 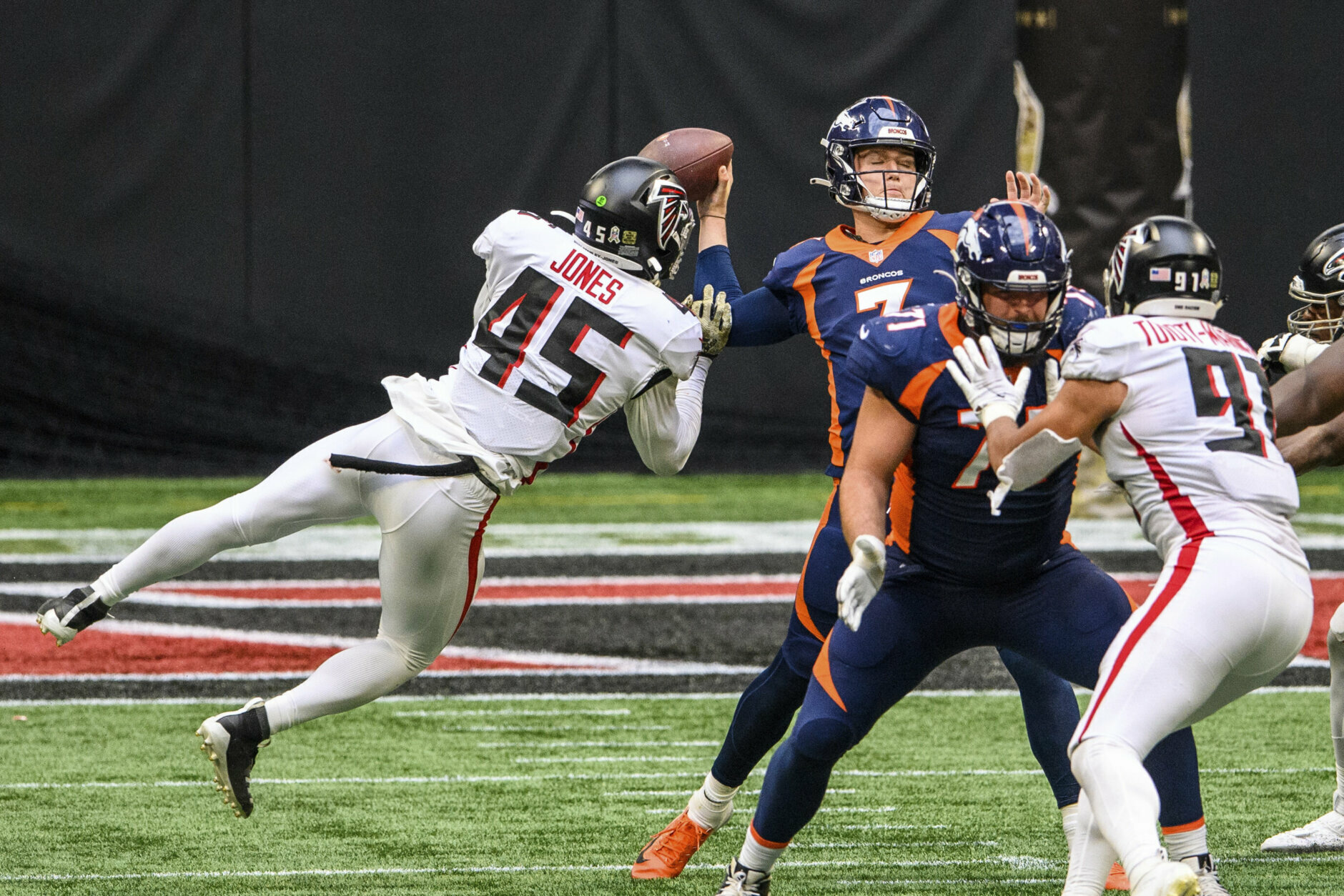 I don’t know how much longer Vic Fangio is the coach in Denver. All I know is failing to come back on Atlanta is a borderline fireable offense.

Seriously, though — Raheem Morris deserves a second chance as an NFL head coach, and if the Falcons can knock off the division-leading Saints at least once, it should come in Atlanta. 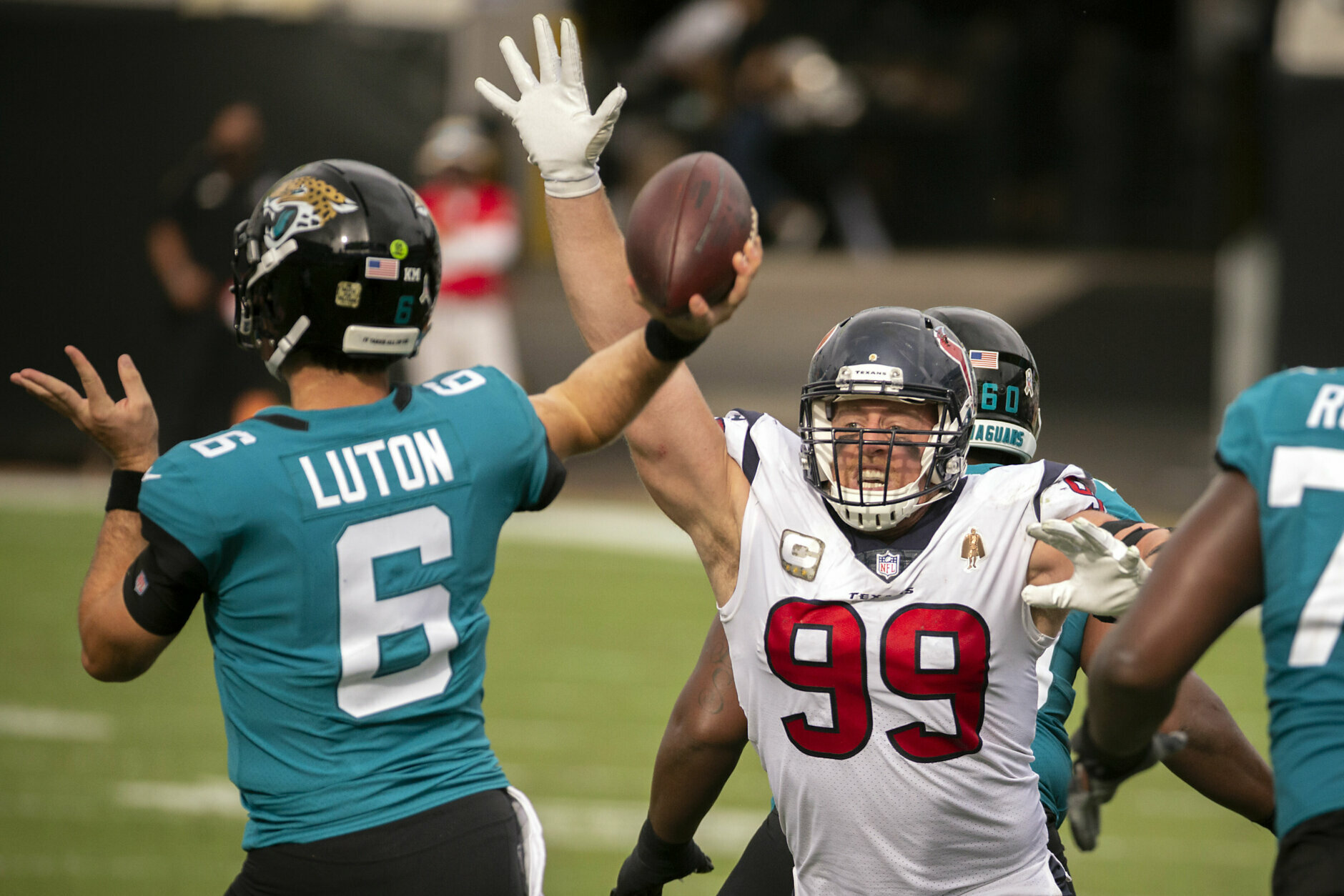 If this is J.J. Watt’s last year in Houston, it was good to see one of the few Texans legends celebrate 100 sacks in a win. Here’s hoping Watt finds his way to a contender in the offseason. 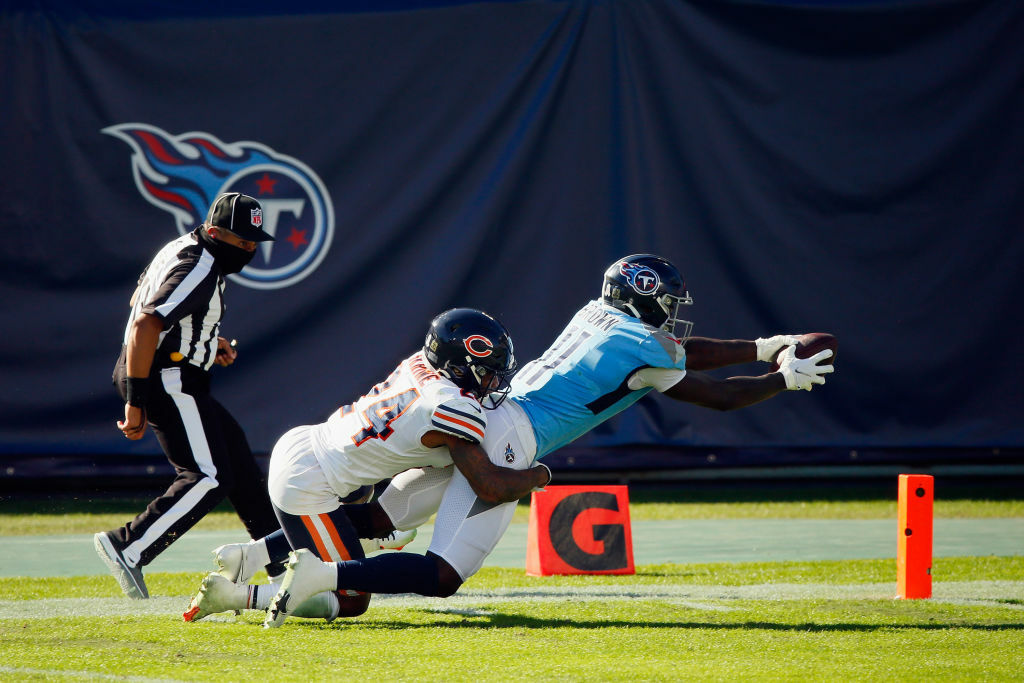 13/14
NASHVILLE, TENNESSEE — NOVEMBER 08: A.J. Brown #11 of the Tennessee Titans scores during the first half against the Chicago Bears at Nissan Stadium on November 08, 2020 in Nashville, Tennessee. (Photo by Frederick Breedon/Getty Images)

The Bears are who we thought they were, and Tennessee is 6-2 for the first time since 2008. Nothing to see here, folks. (Except the late, great Dennis Green.) 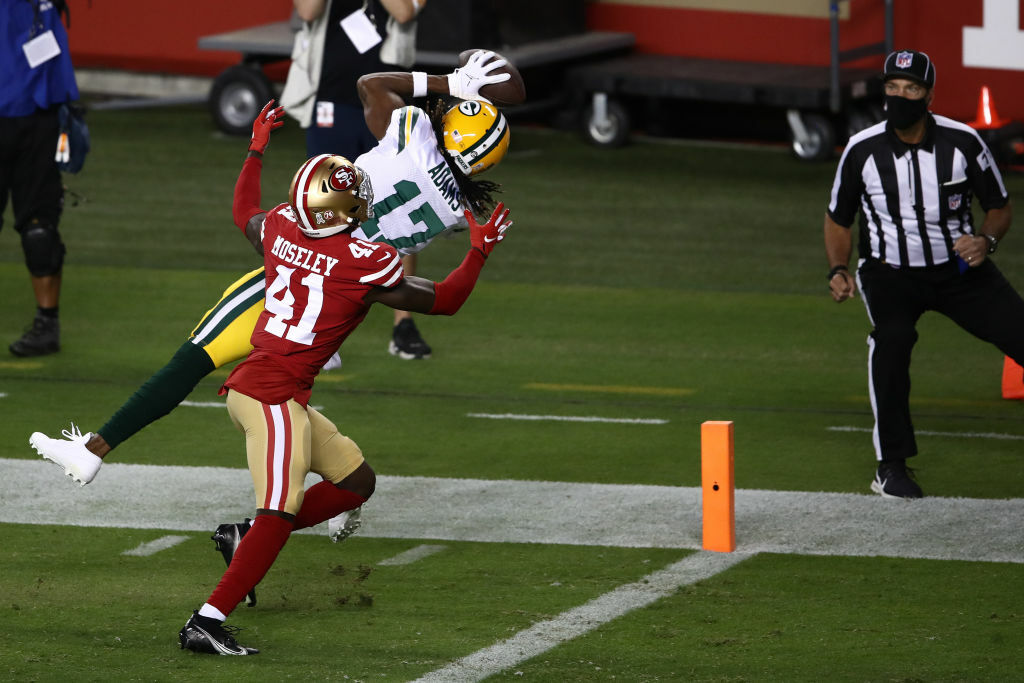 The Aaron Rodgers Scorched Earth Tour rolled through his home state, and Devante Adams made a compelling case for best receiver in the NFL, but this was hollow payback for Green Bay’s loss to San Fran in the NFC title game. The seven players who touched the ball for the 49ers in that game didn’t play Thursday and will likely remain a shell of themselves the rest of this season.

Brandon Marshall tries to break the stigma of mental illness

The Latest: No. 2 Baylor hoops makes surprise trip to Vegas