The NFL Week 5 Recap features a triumphant return in defeat, a career-altering injury, a forgetful old man and a rivalry renewed. 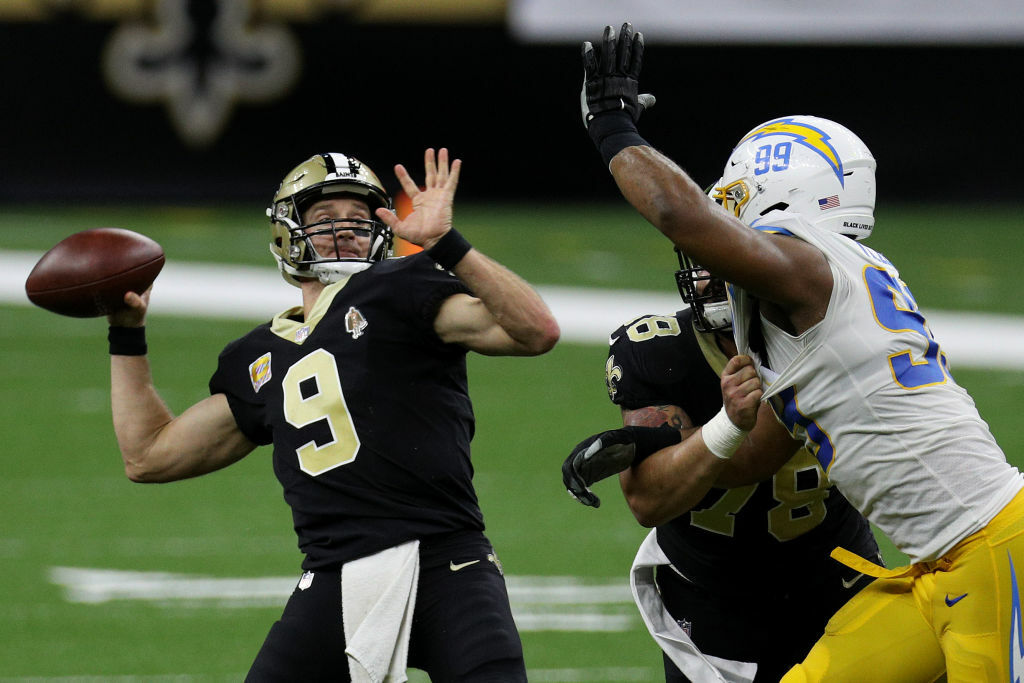 Drew Brees had a mediocre performance in his farewell to the franchise that drafted him but it ended with his NFL-record 13th overtime victory as a starting quarterback. The Chargers can change their uniforms, the city in which they play, the coach and quarterback (though he’s really good) — but their late-game failures will still be their hallmark. 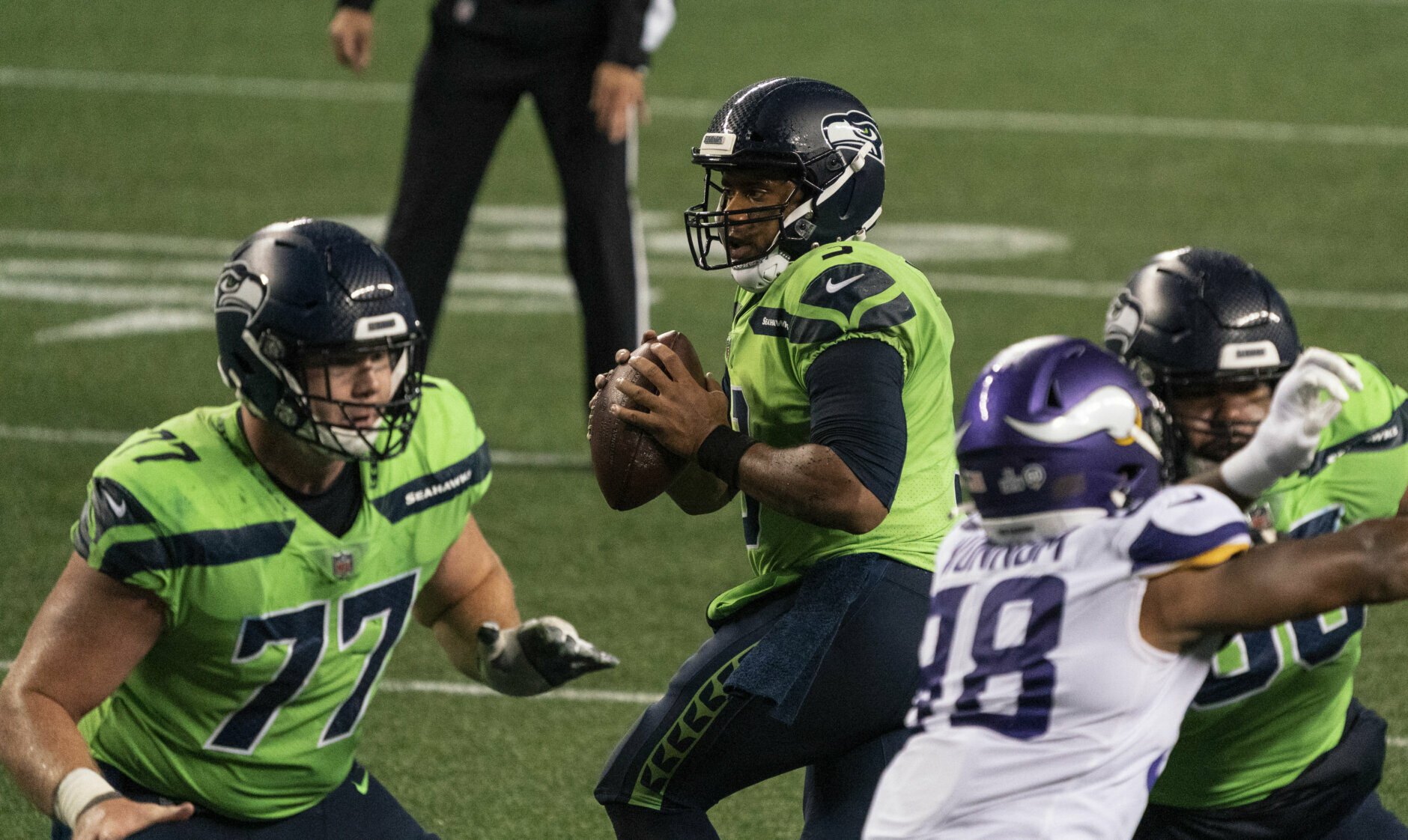 2/13
Seattle Seahawks quarterback Russell Wilson drops back to pass before throwing the game winning touchdown during the second half an NFL football game against the Minnesota Vikings, Sunday, Oct. 11, 2020, in Seattle. The Seahawks won 27-26. (AP Photo/Stephen Brashear)

Kirk Cousins in primetime? What could go wrong?

Well, this time it was more about what Russell Wilson did right. Even as the Seahawks defense gave up 25+ points for the 10th straight home game, the presumptive MVP cooked up his 30th career game-winning drive to give Seattle its first 5-0 start in franchise history. This dude isn’t human. 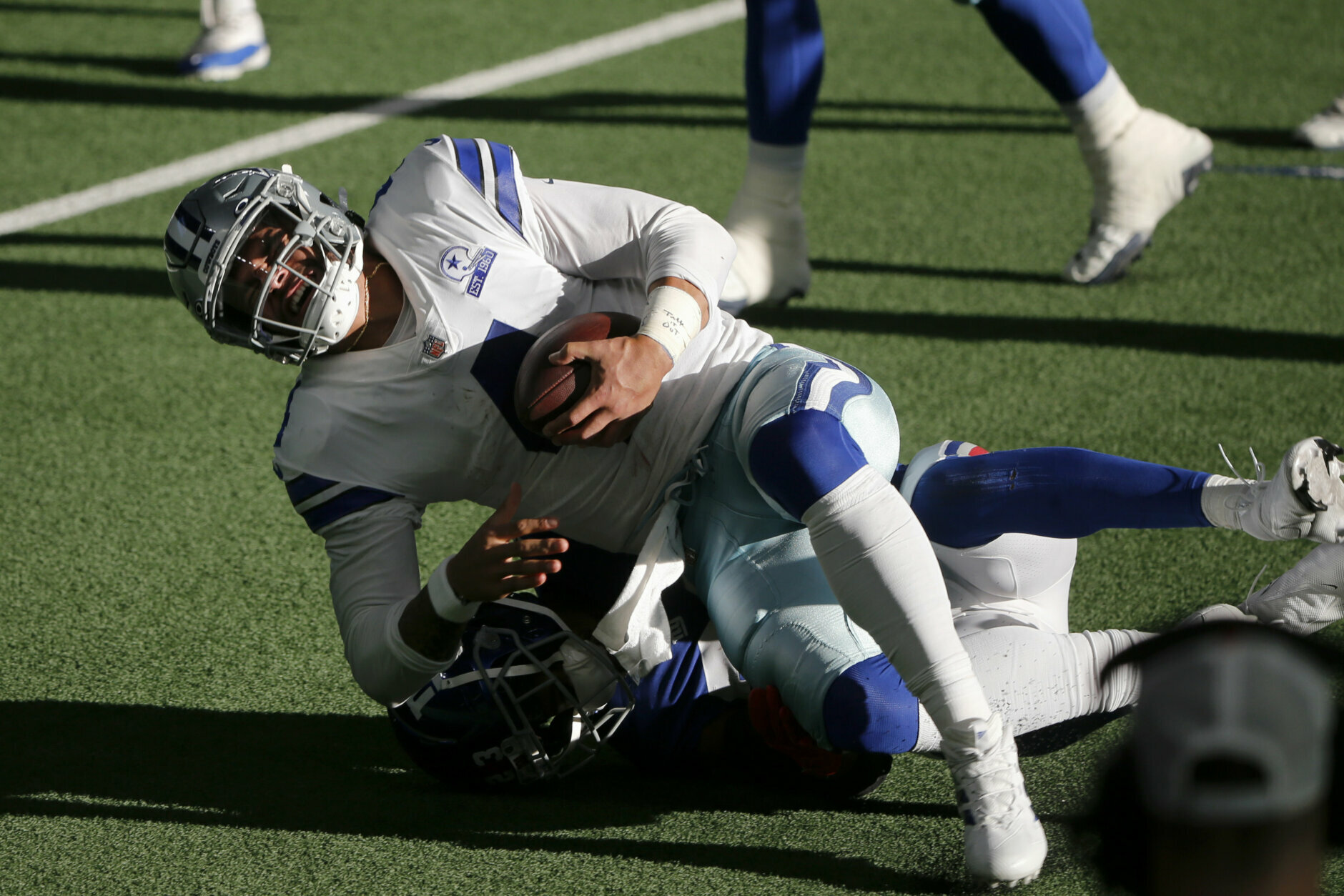 On the same day Alex Smith came back from a gruesome leg injury, Dak Prescott suffered one that dooms Dallas’ already sunken season and puts Dak’s contract situation in great peril. Neither is the most important factor here, so I’ll just end by saying I hope Dak is back in 2021. 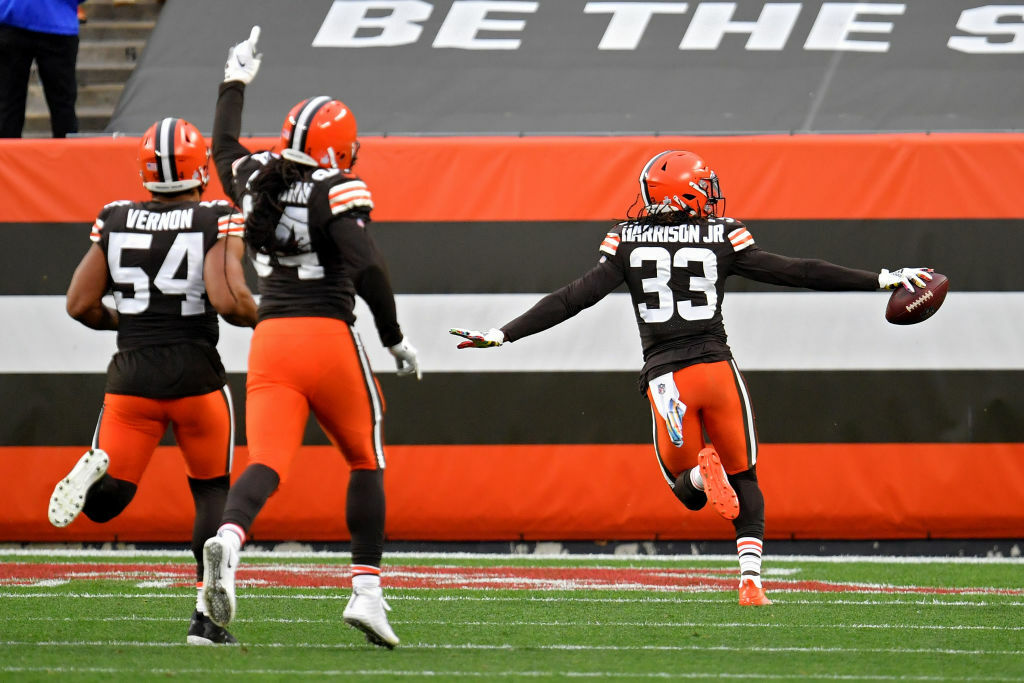 4/13
CLEVELAND, OHIO – OCTOBER 11: Ronnie Harrison Jr. #33 of the Cleveland Browns celebrates after scoring a touchdown from an interception in the third quarter against the Indianapolis Colts at FirstEnergy Stadium on October 11, 2020 in Cleveland, Ohio. (Photo by Jason Miller/Getty Images) 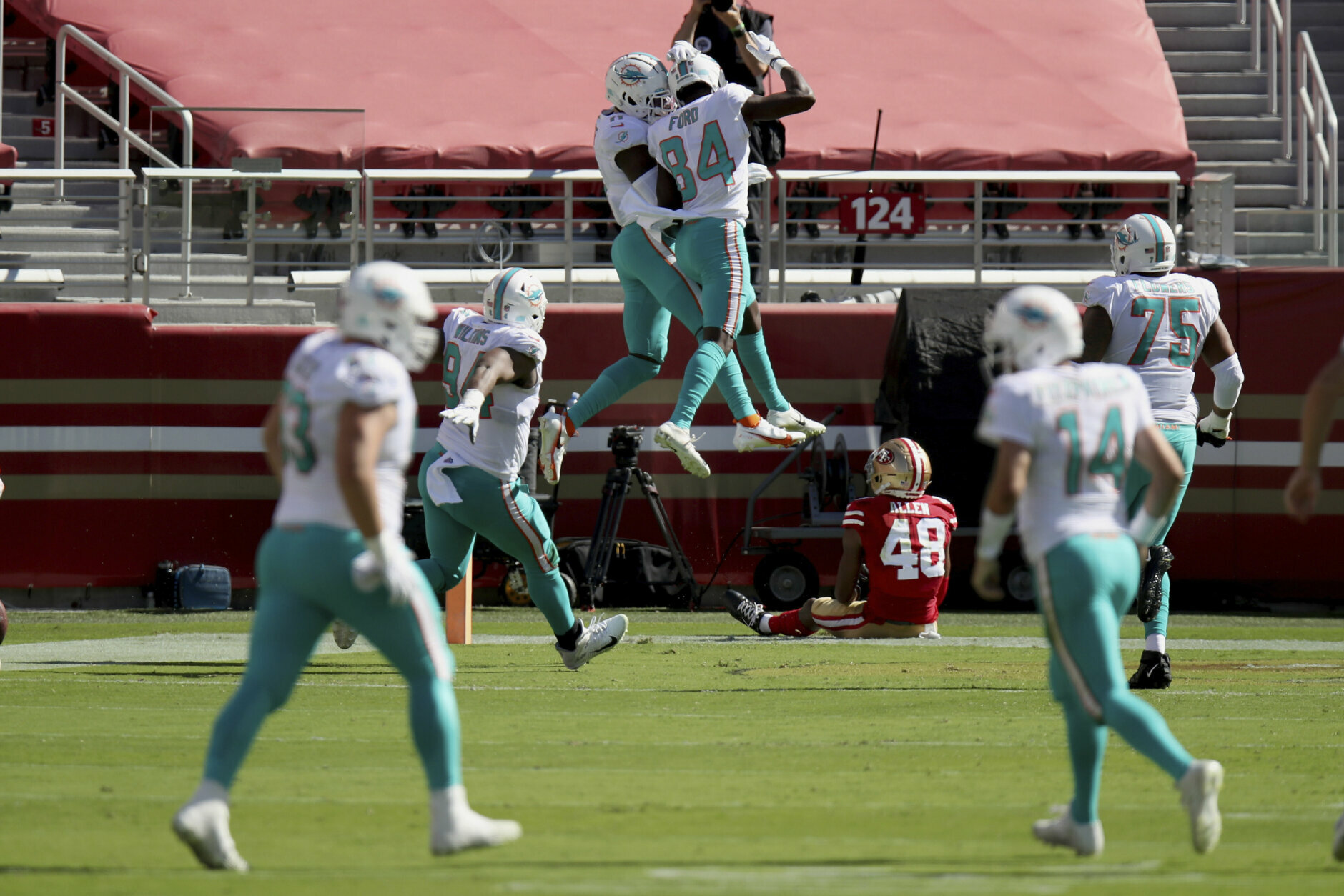 Jimmy G was an unmitigated disaster in a game he probably shouldn’t have played to begin with, but I don’t know if that even mattered. When Fitzmagic is on, it’s unstoppable. 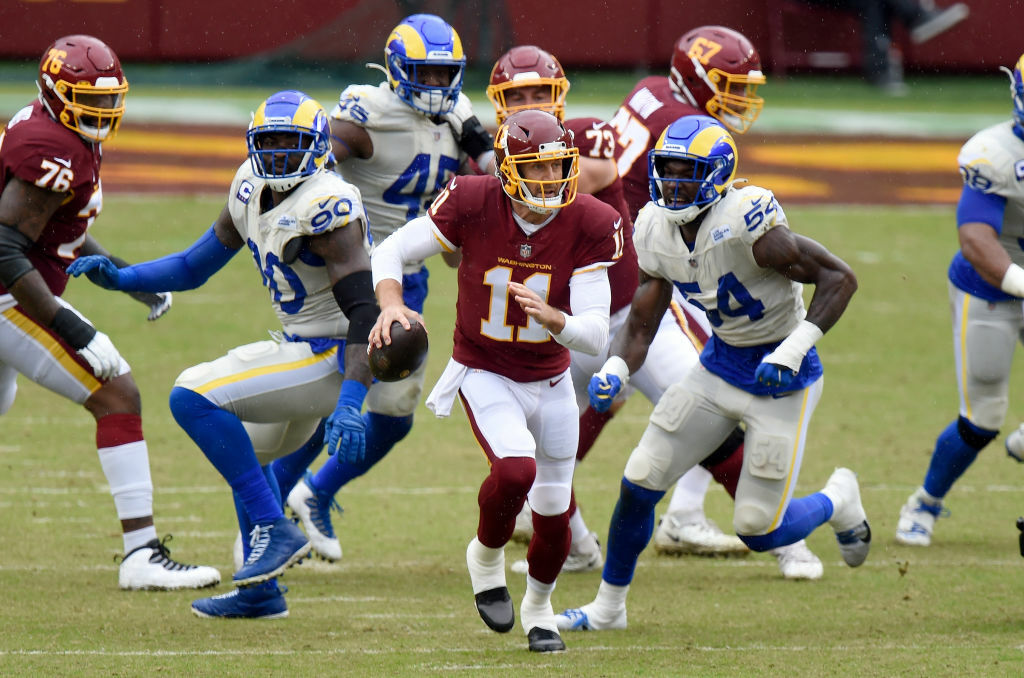 6/13
LANDOVER, MD – OCTOBER 11: Alex Smith #11 of the Washington Football Team scrambles during the second quarter against the Los Angeles Rams at FedExField on October 11, 2020 in Landover, Maryland. (Photo by Greg Fiume/Getty Images)

Talk about a rude reintroduction: Alex Smith was back on an NFL field 693 days after his gruesome leg injury and was greeted with six sacks totaling nearly as much lost yardage (31) as his actual passing yardage (37). This Washington offense is a mess, no matter who plays quarterback. 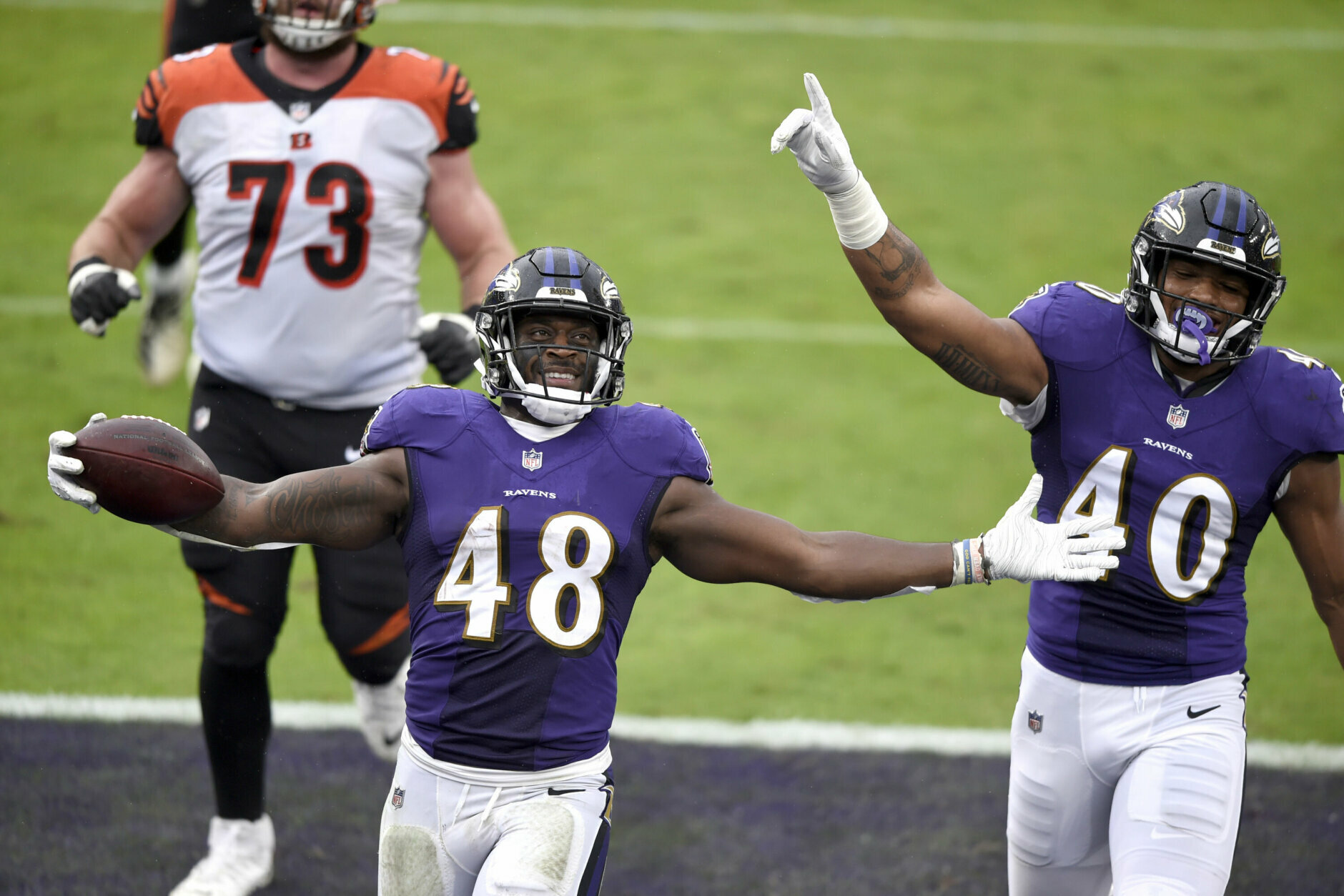 7/13
Baltimore Ravens inside linebacker Patrick Queen (48) celebrates after returning a fumble recovery 53 yards for a touchdown on a ball dropped by Cincinnati Bengals wide receiver Mike Thomas, not visible, during the second half of an NFL football game, Sunday, Oct. 11, 2020, in Baltimore. (AP Photo/Gail Burton)

Though the focus was on the historic meeting between young QBs, Baltimore’s defense finally realized its potential with seven sacks of Joe Burrow and extended their streak to 18 straight games with a takeaway. The Ravens D will need more games like this to repeat as champions of the suddenly-competitive AFC North. 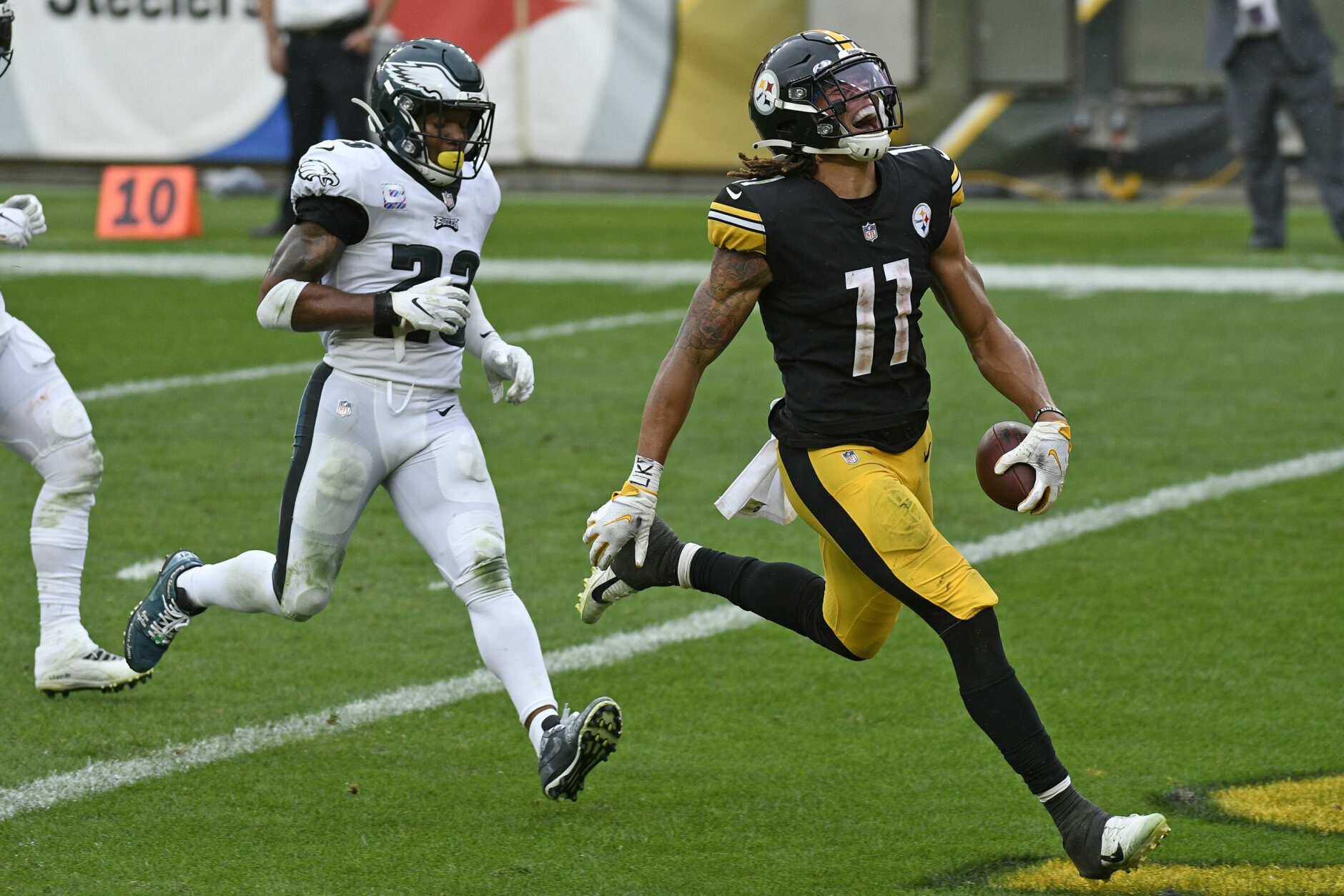 Pittsburgh is 4-0 for the first time since its Super Bowl season in 1979, and only Gale Sayers had more touchdowns in a game as a rookie than Chase Claypool’s 4-TD performance. With apologies to the defending champion Chiefs, the Steelers-Ravens rivalry will have more influence on the AFC playoff picture. 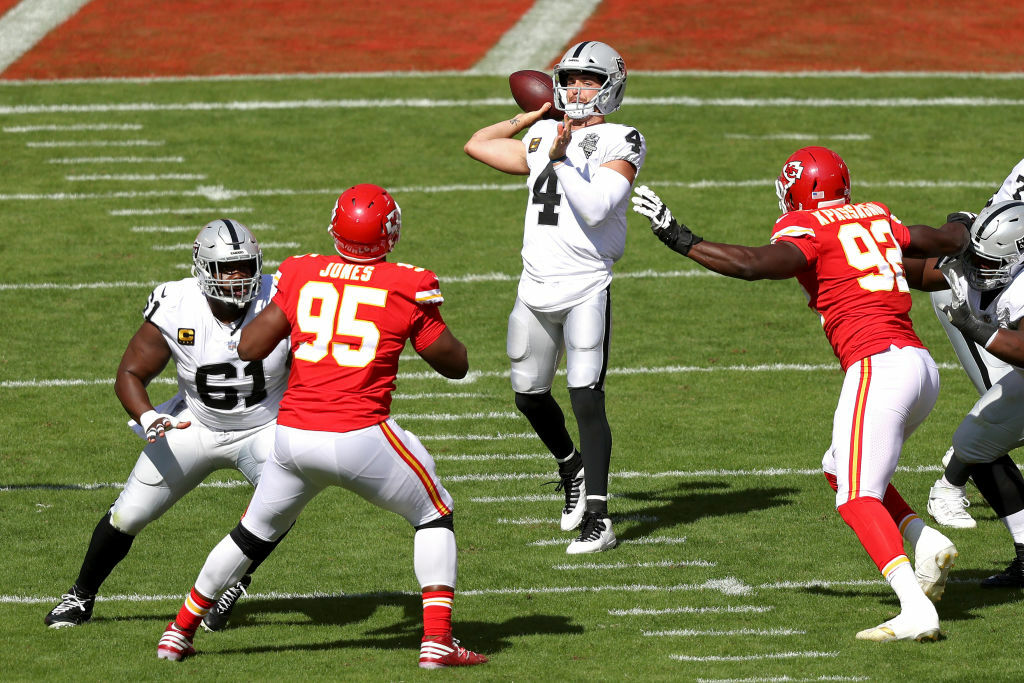 I guess we have a rivalry now.

Derek Carr is quietly becoming one of the most prolific passers in Raiders history, outdueling the mighty Patrick Mahomes in his own home to lead Las Vegas to an improbable victory that ends Kansas City’s 13-game win streak. The AFC West just got a whole lot more interesting than we thought it would be.

The Jags - A Franchise story.pic.twitter.com/fhuUgeYpbv

Oh, there’s that Jay Gruden playcalling Washington fans know so well and hate so much.

Jacksonville is the first team in NFL history to lose three straight games against winless teams in a season. The Jaguars are so bad, they can’t even beat a floundering Houston Texans organization actively botching their new coaching search before it has even begun. If Deshaun Watson doesn’t regret signing that contract extension, he almost certainly will. 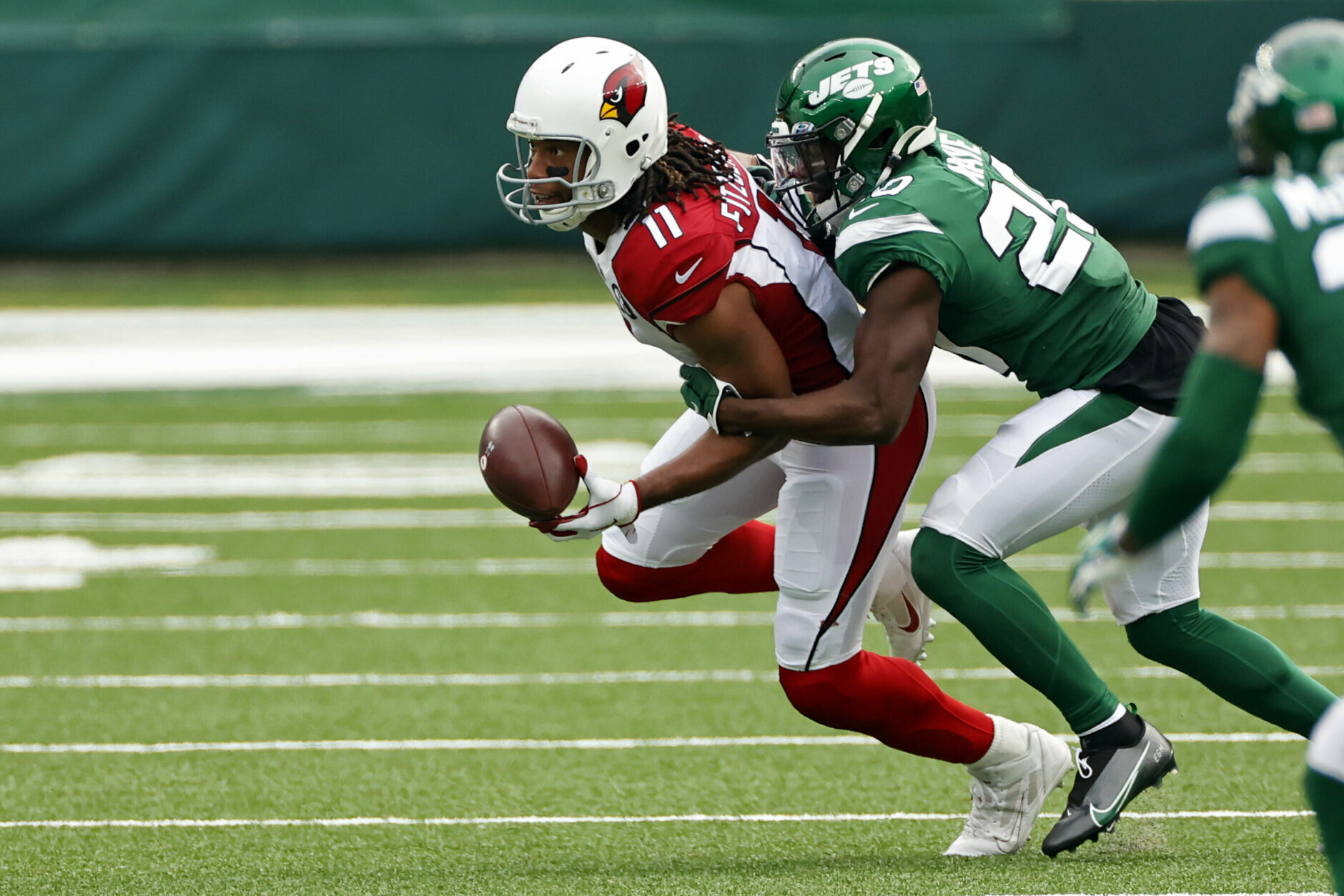 11/13
Arizona Cardinals wide receiver Larry Fitzgerald (11) makes a one handed catch in front of New York Jets free safety Marcus Maye (20) during an NFL football game, Sunday, Oct. 11, 2020, in East Rutherford, N.J. (AP Photo/Adam Hunger)
Cardinals 30
Jets 10
Regardless of how inept the Jets are, Arizona needed to prove they could bounce back from adversity — and Kyler Murray’s career-high 380 passing yards implies that. Don’t be surprised if he tops that in his Monday Night Football debut against that awful Dallas defense.
And, I get Gang Green had to dust off a past-his-prime Joe Flacco to start at QB, but at this point, it’s not a matter of whether Adam Gase gets fired — it’s whether he lasts much longer than Dan Quinn. 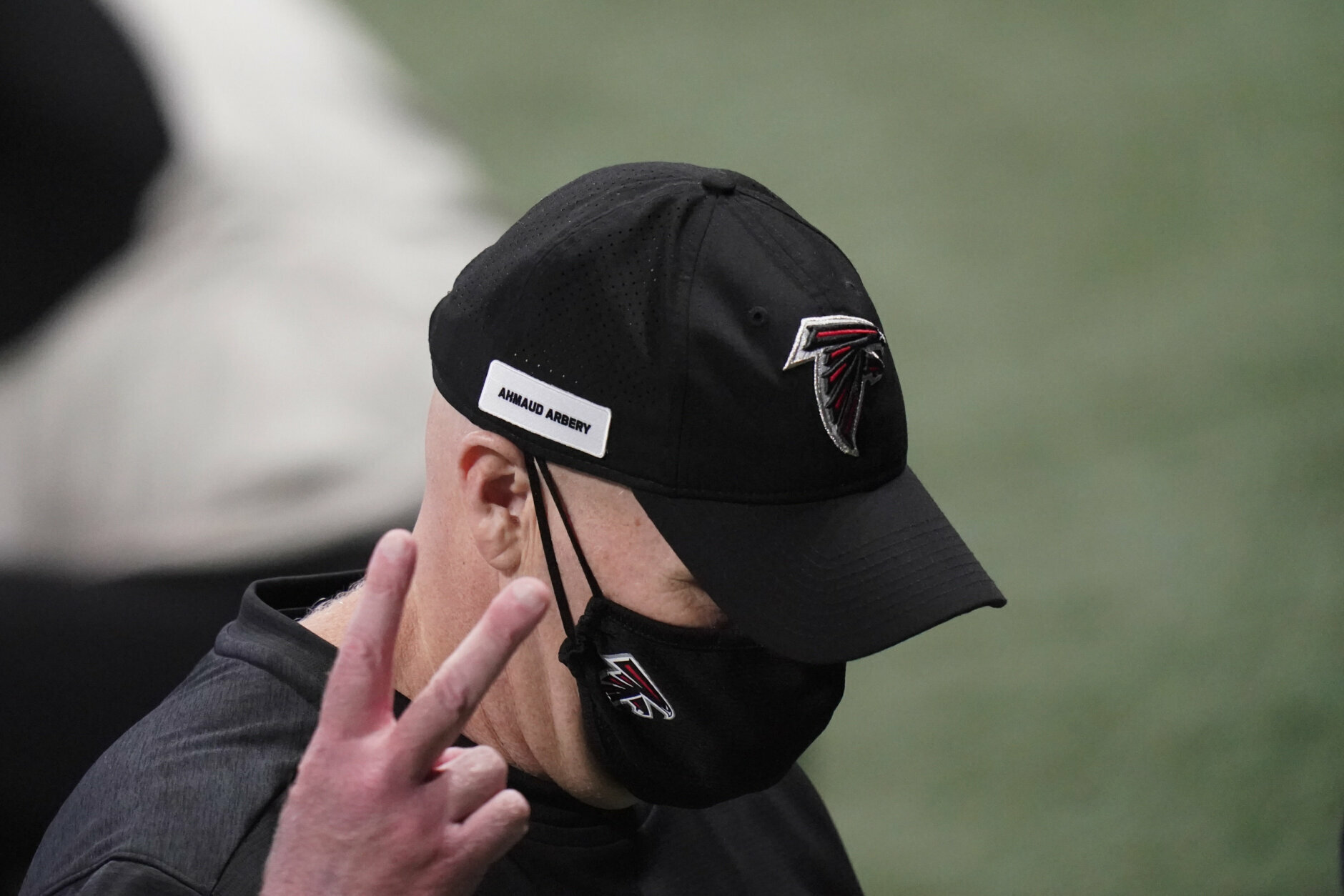 12/13
Atlanta Falcons head coach Dan Quinn gestures as he walks off the field after an NFL football game against the Carolina Panthers, Sunday, Oct. 11, 2020, in Atlanta. (AP Photo/Brynn Anderson)

Speaking of Quinn, his firing had to happen. Carolina winning in Atlanta for the first time since 2014 might be the clincher, but the Falcons — 0-5 for the first time in 23 years — have woefully underachieved considering all the firepower they have, even if the defense has been largely bad under the defensive-minded Quinn. Atlanta is in for a rough rebuild. 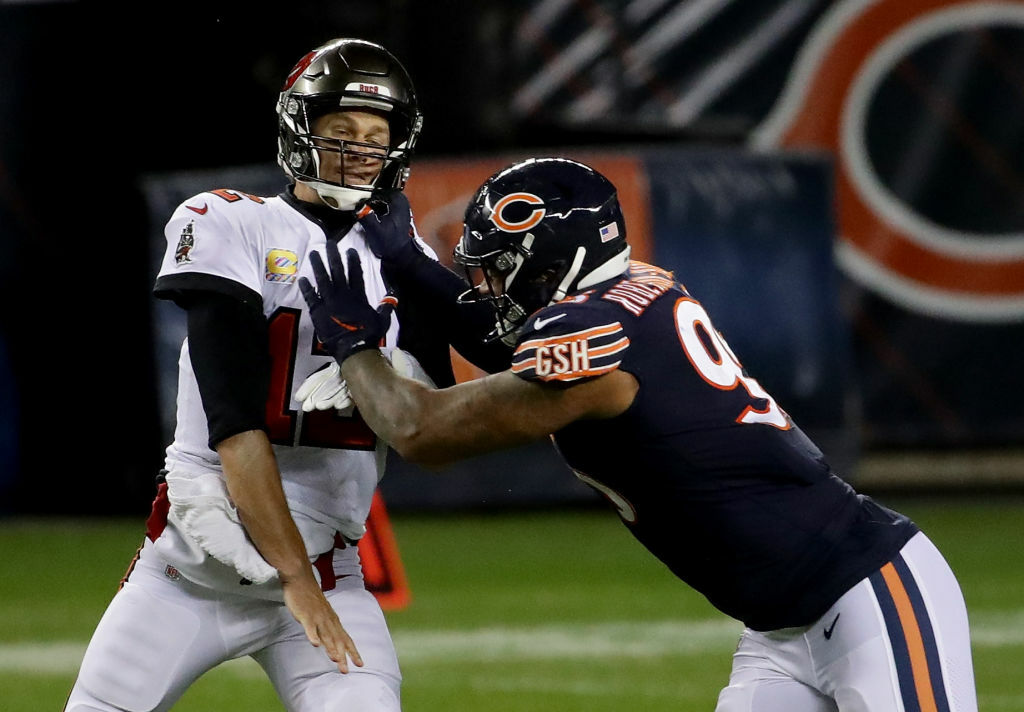 I don’t know which is more 2020: Tom Brady not knowing it’s fourth down on a potential game-winning drive or Chicago winning three games after trailing by 10+ points (and leading the league with a +39 point differential in the fourth quarter). Regardless, Nick Foles is an odd member of the “QBs That Own the GOAT” club. 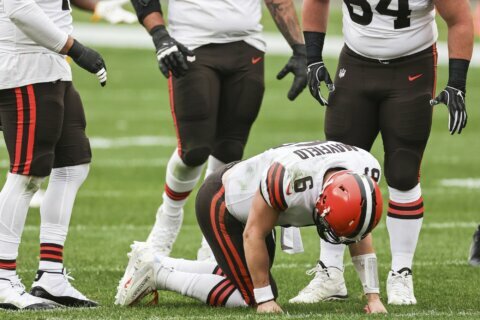