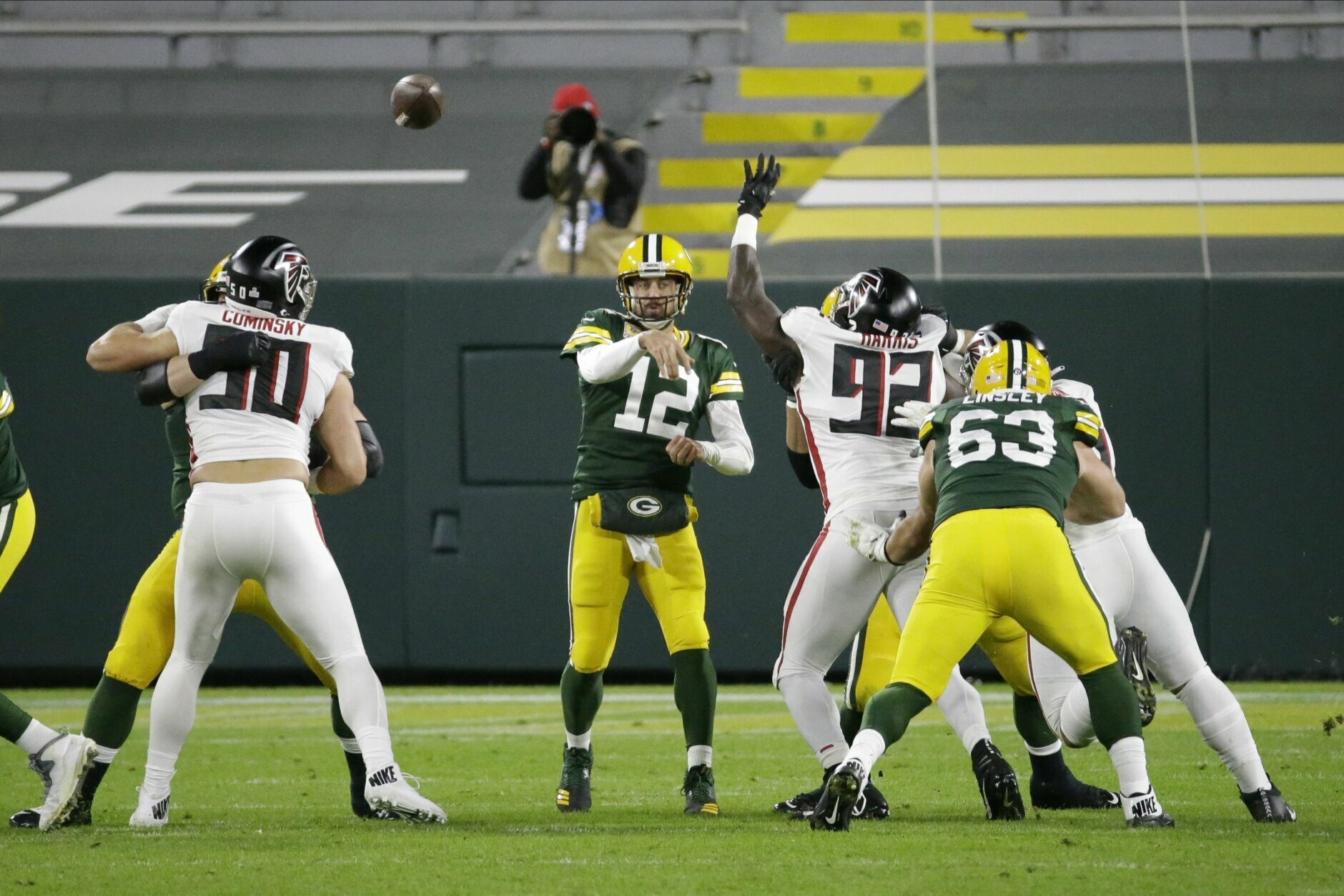 Look, I get that Atlanta’s secondary is banged up badly. But Aaron Rodgers didn’t have his top two receivers and still had a near-perfect passer rating to stay undefeated on Monday Night Football since 2014. Green Bay looks like the team to beat in the NFC. 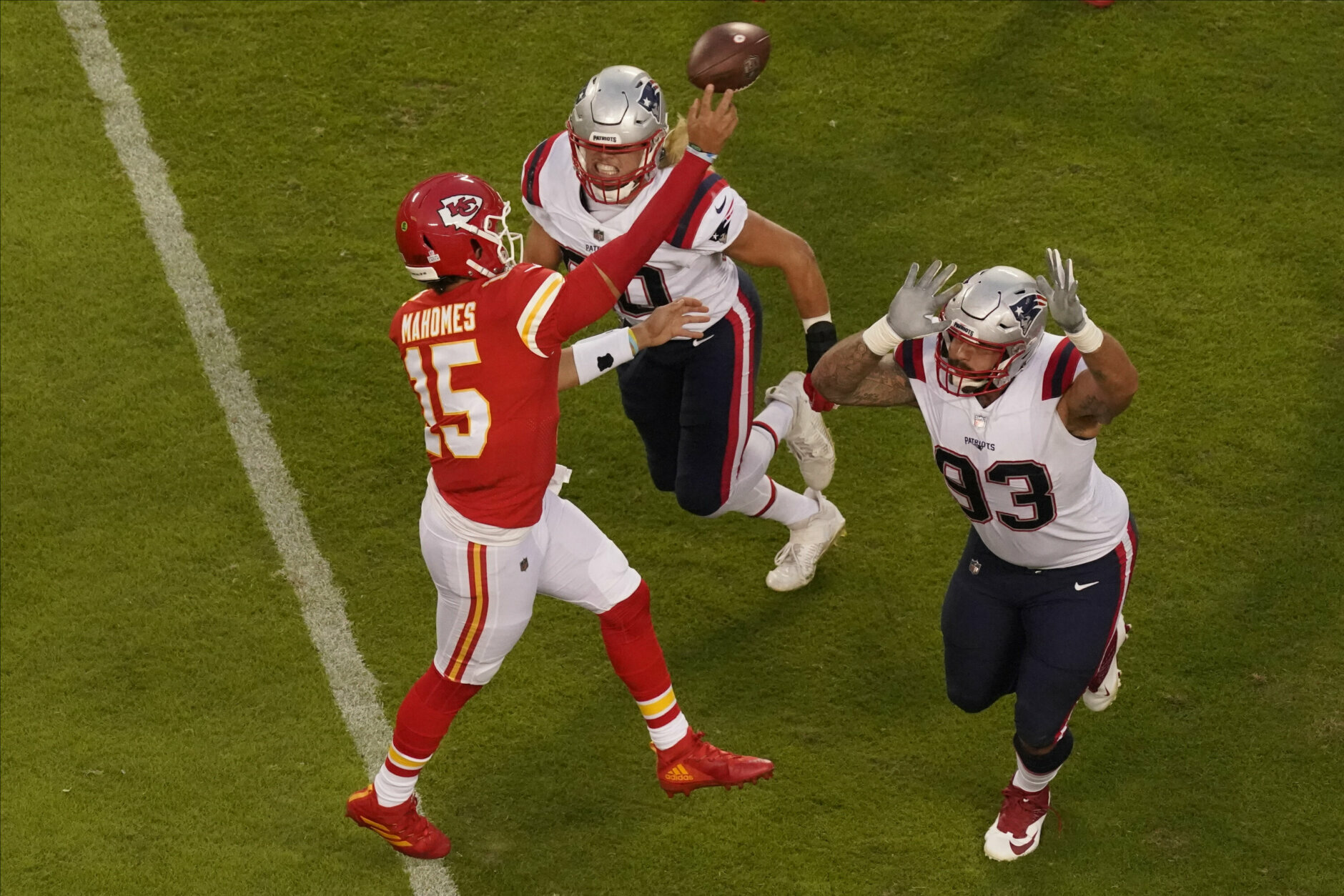 Perhaps Patrick Mahomes’ mom doesn’t like you shortening his name because it’s also short for Patriots — as in, the only team to beat Mahomes twice and the only team to hold his Chiefs without a touchdown in the first half of a game. But without a QB, the Patriots had no shot of leaving Kansas City with a win. Consider this a glimpse of what football season in New England would look like if they weren’t gift wrapped Cam Newton. 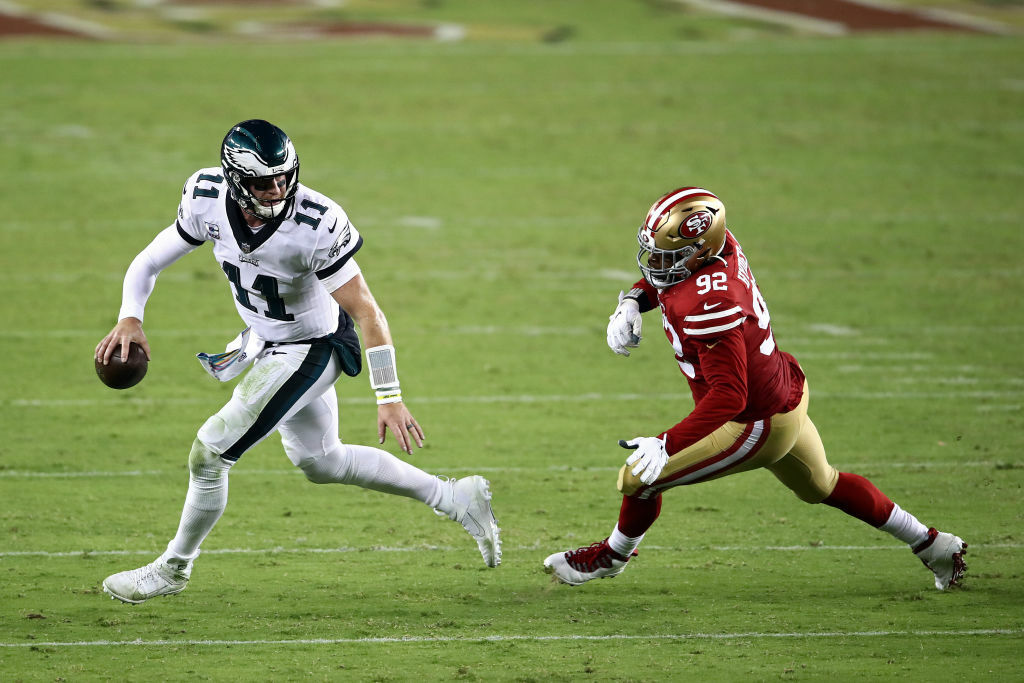 3/15
SANTA CLARA, CALIFORNIA – OCTOBER 04: Carson Wentz #11 of the Philadelphia Eagles tries to avoid a tackle from Kerry Hyder Jr. #92 of the San Francisco 49ers in the game at Levi’s Stadium on October 04, 2020 in Santa Clara, California. (Photo by Ezra Shaw/Getty Images)

How bad is the NFC East? Philadelphia is in first place, despite winning its first game in Week 4 and running only three plays this season while leading in the fourth quarter. If the NFL ever adopted relegation, this whole division would get tossed for the SEC.

But hey, at least we got that great Brandon Aiyuk touchdown! 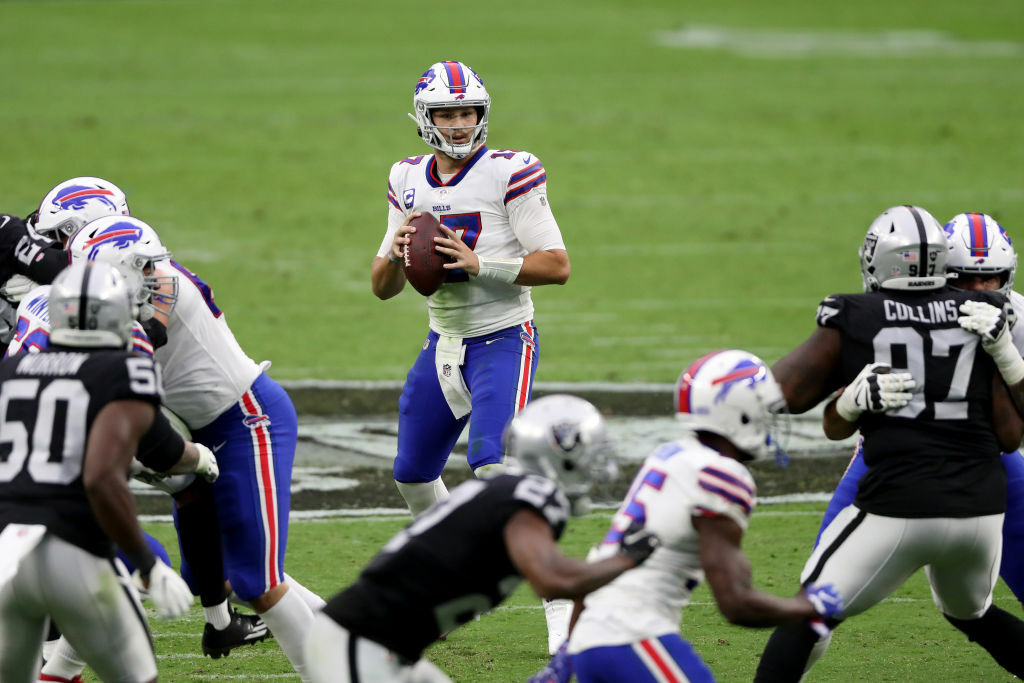 4/15
LAS VEGAS, NEVADA – OCTOBER 04: Josh Allen #17 of the Buffalo Bills looks to throw a pass against the Las Vegas Raiders during the second quarter in the game at Allegiant Stadium on October 04, 2020 in Las Vegas, Nevada. (Photo by Matthew Stockman/Getty Images)

Rebirth of Roethlisberger, indeed. Josh Allen shrugged off a shoulder injury to score all three of Buffalo’s touchdowns and lead the Bills to their first 4-0 start in 12 years. If that defense ever gets its act together, Buffalo could run away with the AFC East. 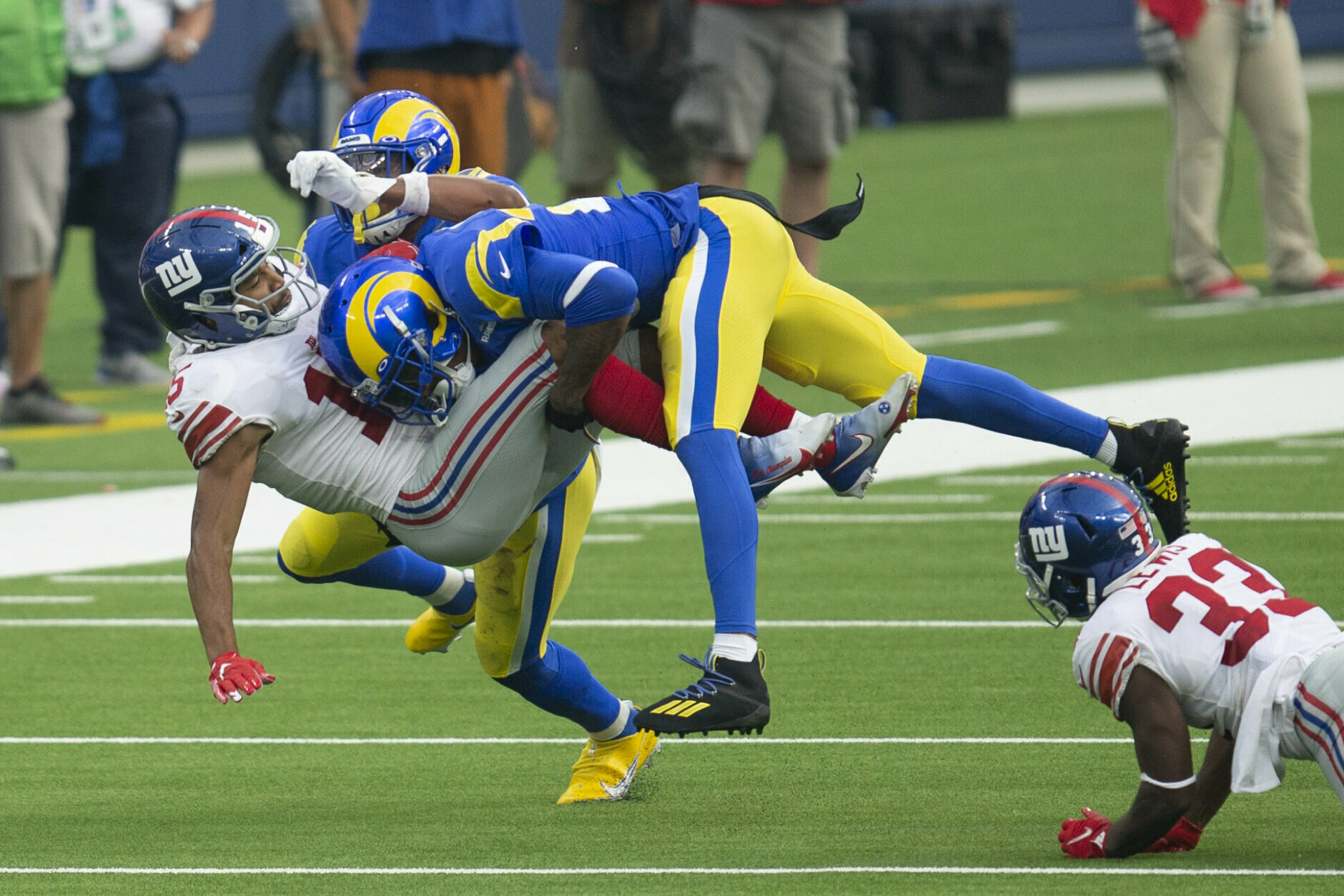 As expected, the Springer-esque beef between Golden Tate and Jalen Ramsey turned this ho-hum matchup into a full-on brawl. If the Giants had that kind of fight all the time, they might actually win a game. 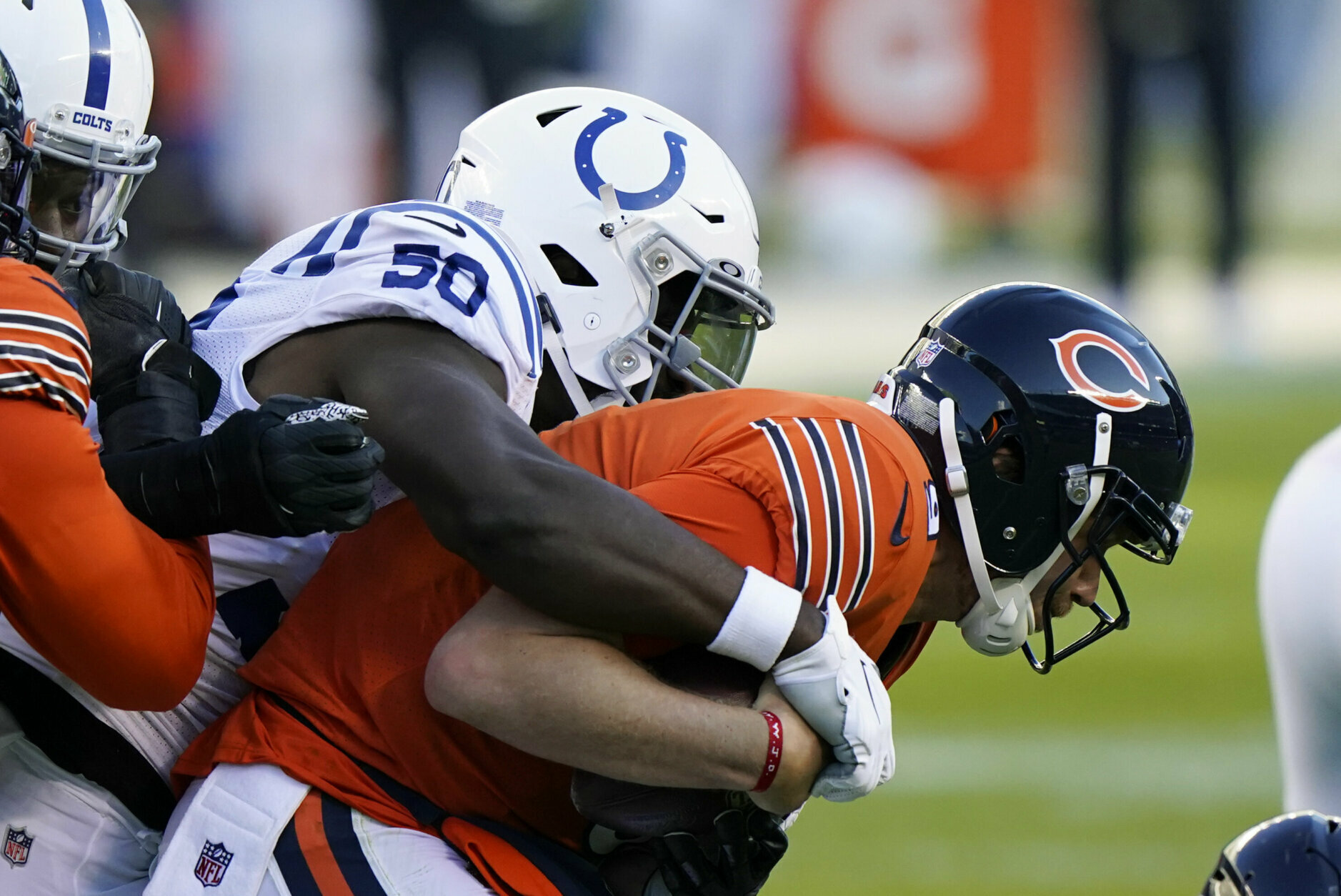 Nick Foles and Frank Reich were reunited, and it was a great reminder that Foles — now 0-5 as a starter the last two seasons — is only magical when wearing an Eagles jersey. 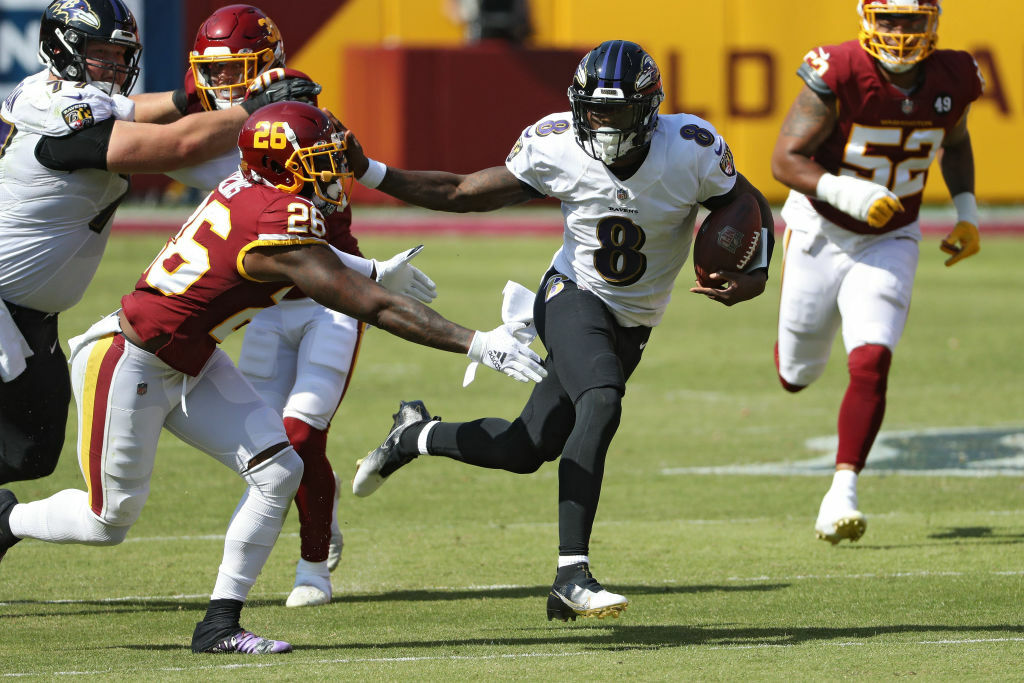 7/15
LANDOVER, MARYLAND – OCTOBER 04: Quarterback Lamar Jackson #8 of the Baltimore Ravens rushes for a 50-yard touchdown against the Washington Football Team during the second quarter at FedExField on October 4, 2020 in Landover, Maryland. (Photo by Patrick Smith/Getty Images)

If Kansas City is Baltimore’s Kryptonite, Washington is the Ravens’ yellow sun (Superman fans get this). But history suggests Baltimore would have been better off losing: The Ravens have only ever won a Super Bowl after losing to Washington in the regular season, so this might actually be another win for the Chiefs.

And forget the Battle of the Beltways. We’re all rooting for Ron Rivera to win his battle against cancer, and Sunday was a great show of support. 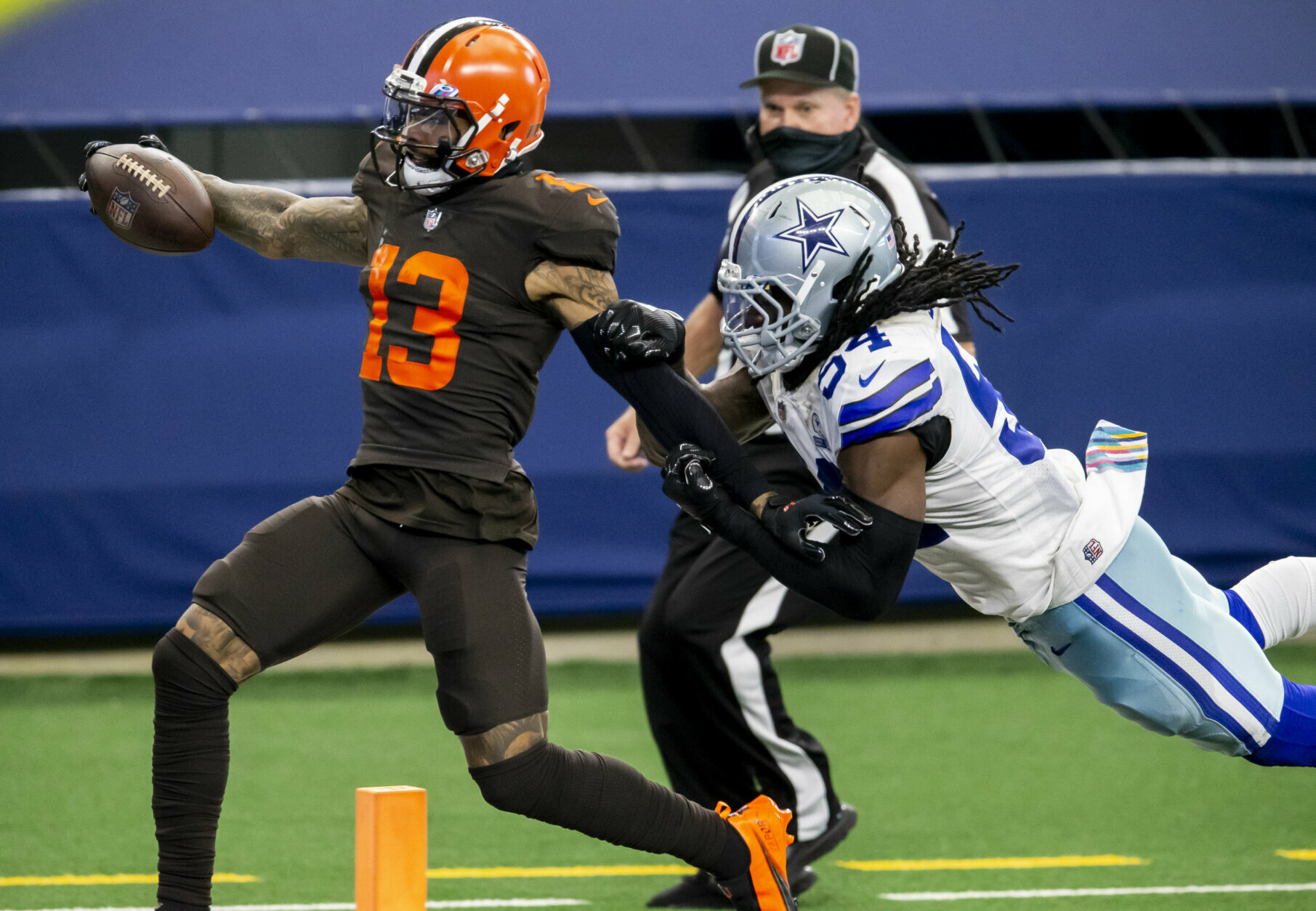 Oh, sorry. I’ll just objectively and not at all gleefully say Dak Prescott’s historic and breathtaking passing numbers are the only thing keeping Dallas competitive and should get him paid handsomely at season’s end. But a Cowboys defense capable of giving up over 300 rushing yards and 49 points at home will get you completely blowed out … blown out.

But give it up for Cleveland. The Browns have scored 30+ points in three straight games for the first time since 1969 and are off to their first 3-1 start since 2001, even as their receivers got so tired of waiting for balls from Baker Mayfield they ended up throwing a touchdown to each other. The AFC North is going to be a helluva battle all year long. 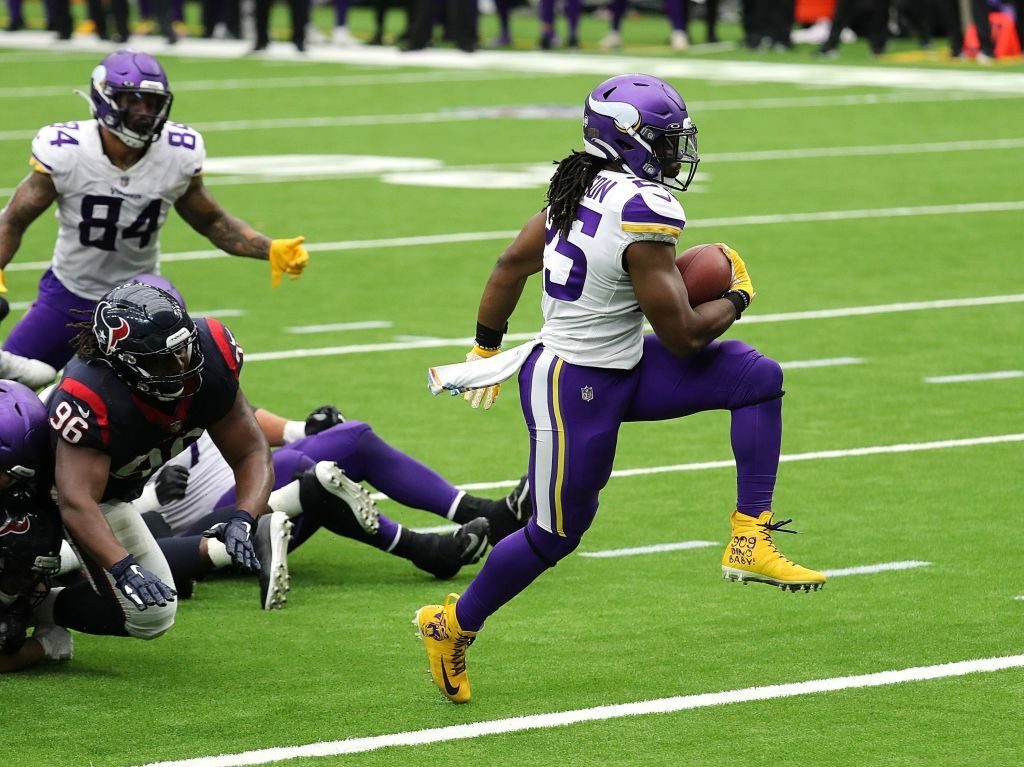 9/15
HOUSTON, TEXAS – OCTOBER 04: Alexander Mattison #25 of the Minnesota Vikings scores on a 5 yard run past P.J. Hall #96 of the Houston Texans during the fourth quarter at NRG Stadium on October 04, 2020 in Houston, Texas. (Photo by Bob Levey/Getty Images)

A team with Deshaun Watson at quarterback loses at home to a winless team with Kirk Cousins at quarterback because it’s poorly coached. Bill O’Brien took Houston from contender to 0-4 afterthought, and if the Jaguars drop the Texans to 0-5, he shouldn’t finish out the season. 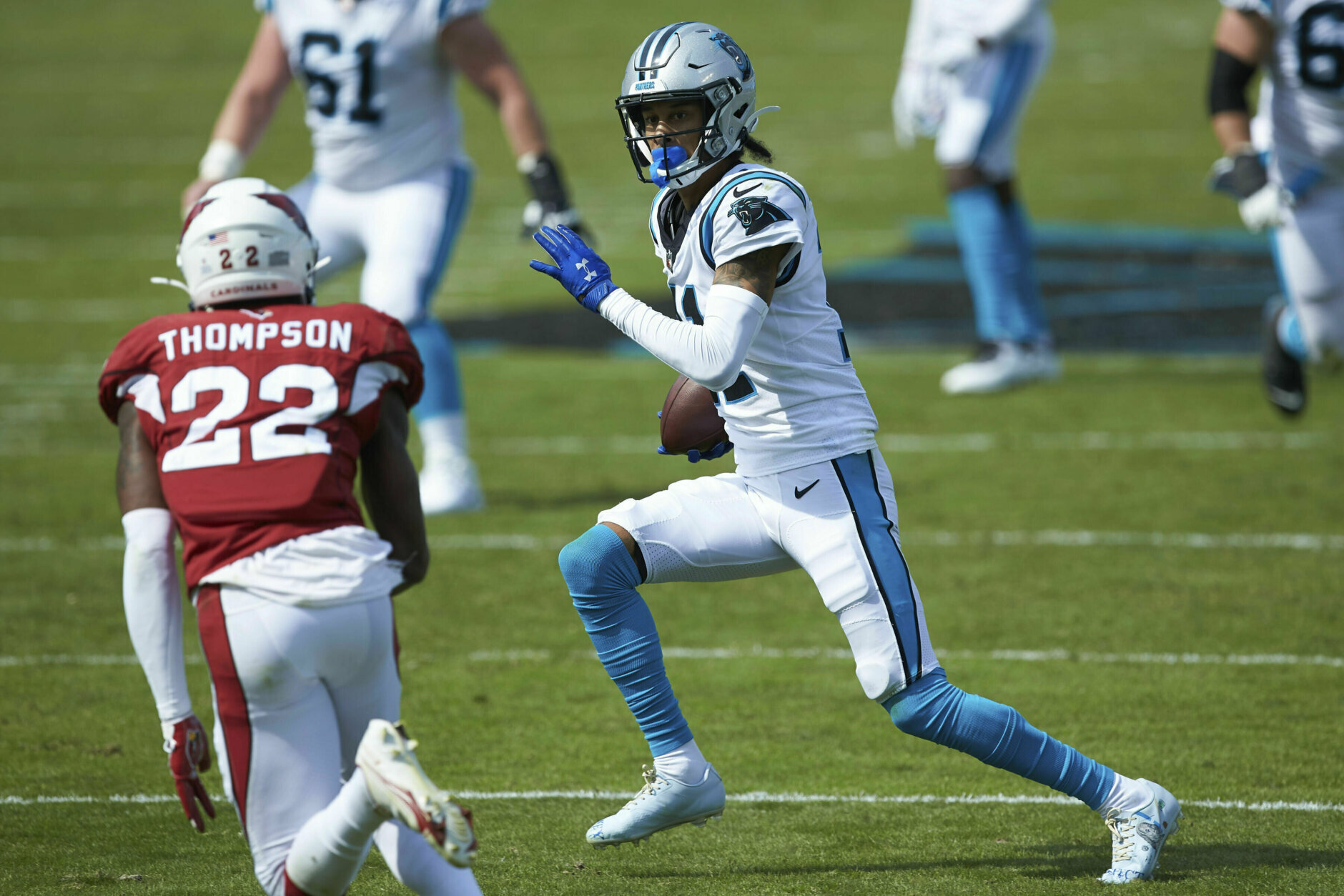 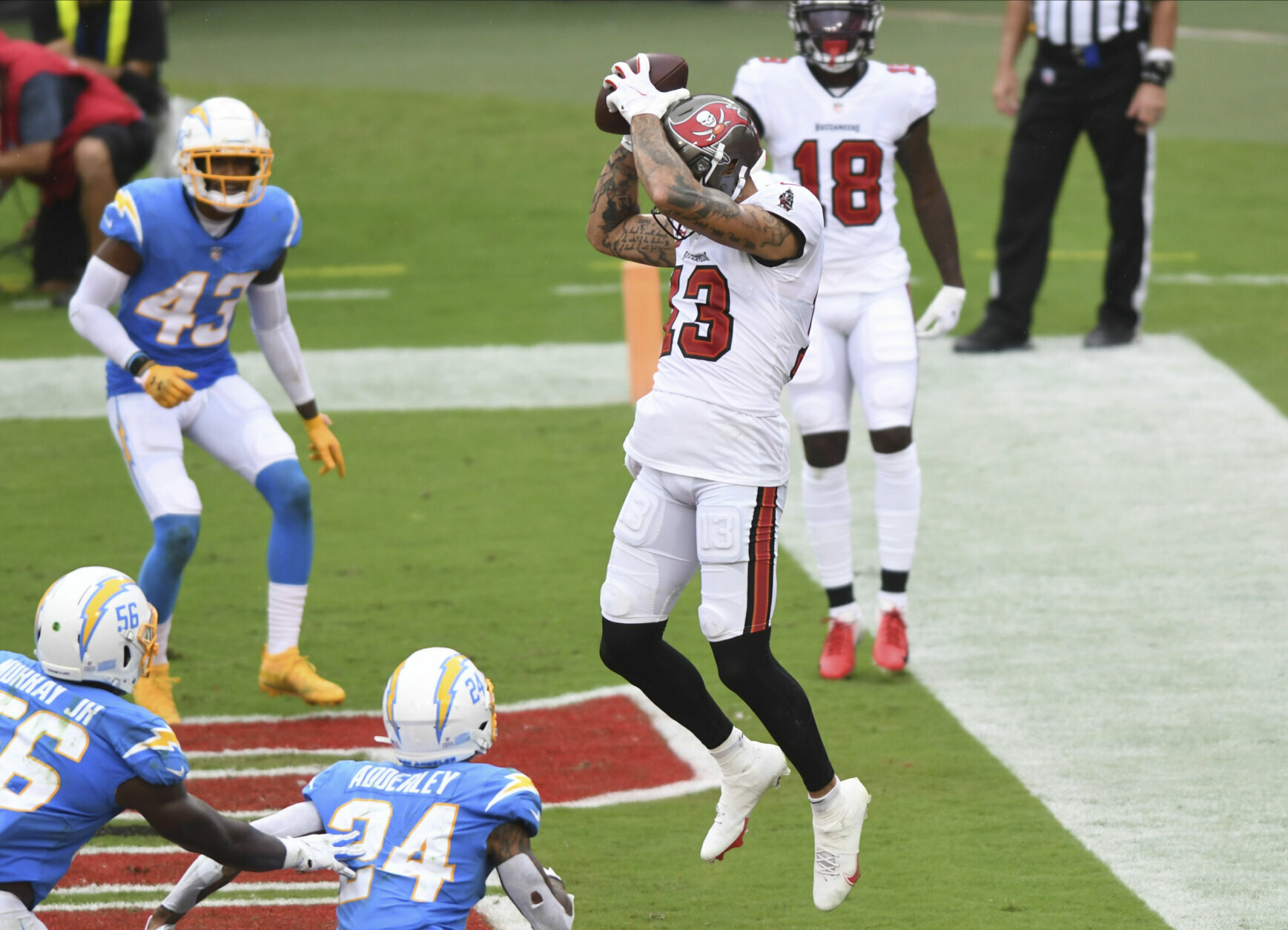 Mike Evans moonwalked off criticizing Keenan Allen and then moonwalked into the end zone for one of Tom Brady’s five touchdown passes, helping TB become the oldest player to have a five-TD game. But will the GOAT’s 43-year-old arm have enough juice to play a Thursday night game in Chicago? 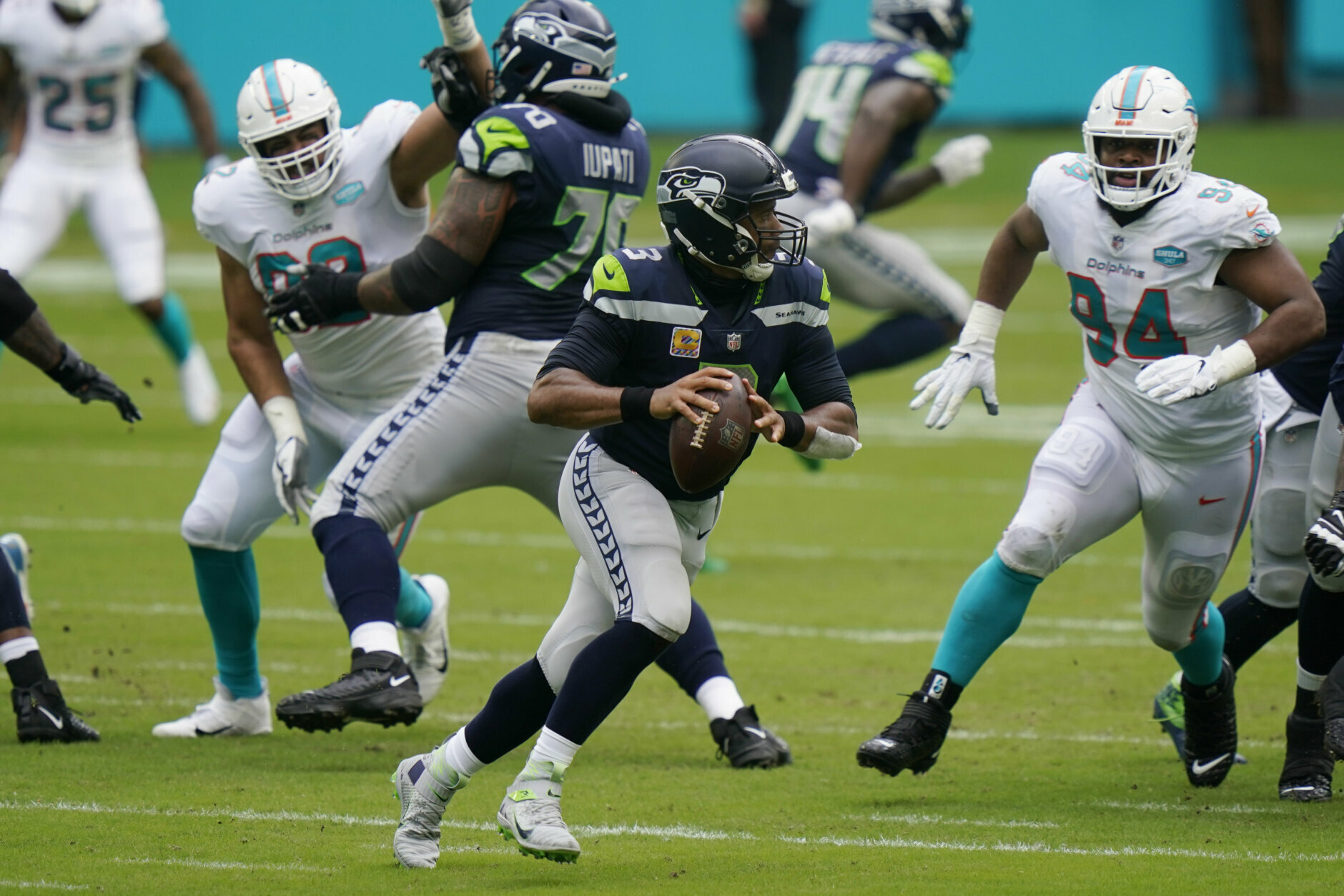 12/15
Seattle Seahawks quarterback Russell Wilson (3) runs with the ball during the first half of an NFL football game against the Miami Dolphins, Sunday, Oct. 4, 2020, in Miami Gardens, Fla. (AP Photo/Lynne Sladky)

Seattle’s defense continues to give up 300-yard passing games, but Russell Wilson keeps outdueling all comers, tying the NFL record with 16 TD passes in the first four games of the season. He could legit go from never getting an MVP vote to being a unanimous choice for the award. 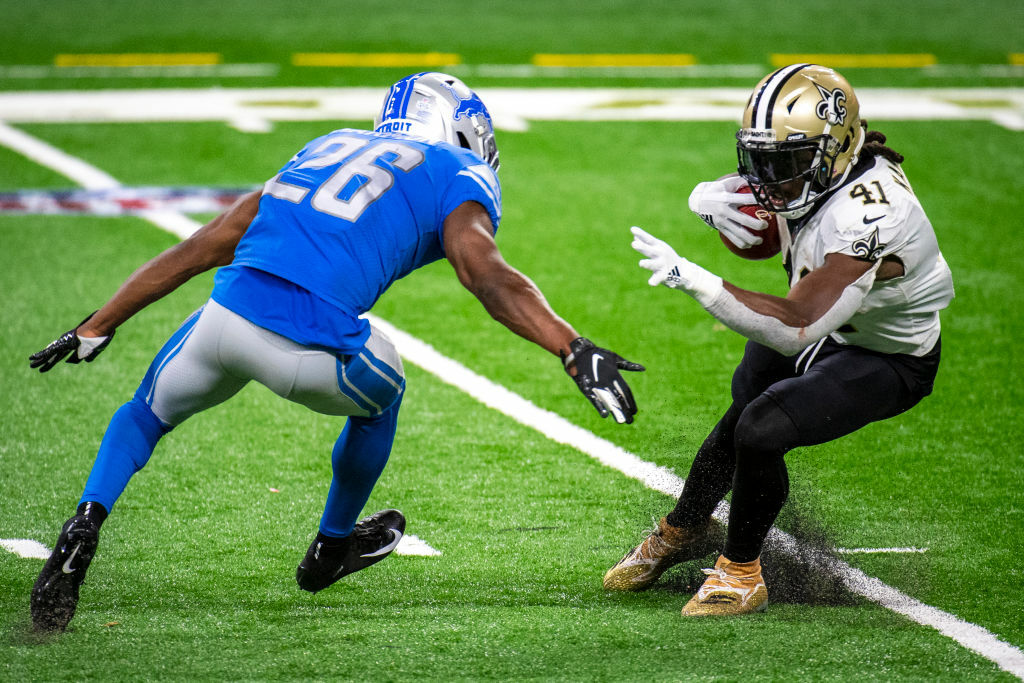 Detroit is the first team in NFL history to lose six straight games in which they’ve led by double digits. The Lions owe Jim Caldwell an apology. 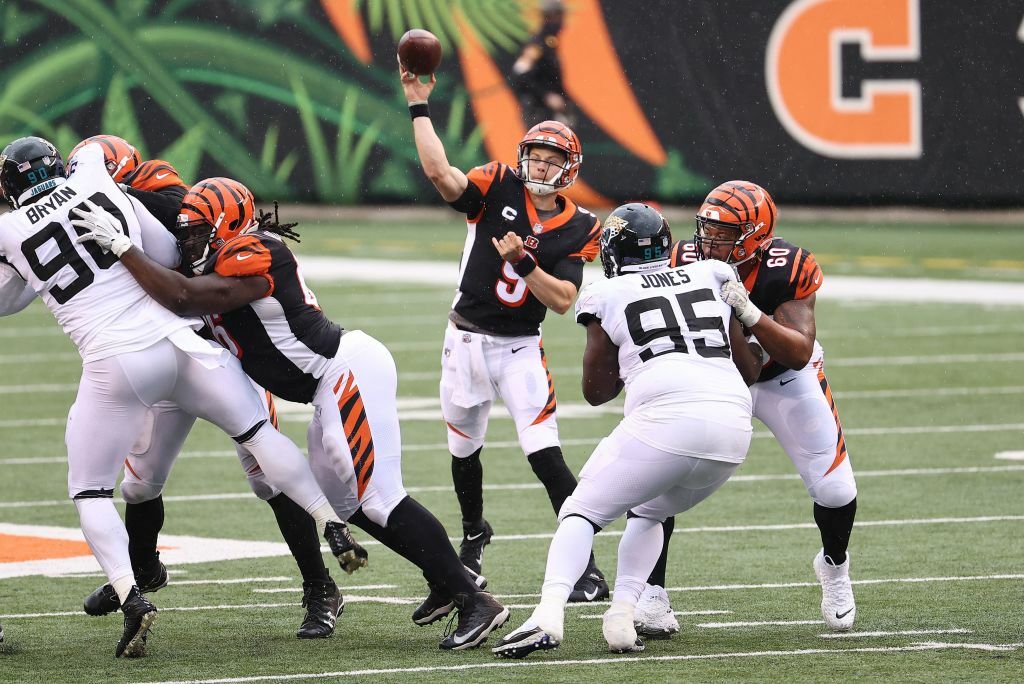 14/15
CINCINNATI, OHIO – OCTOBER 04: Joe Burrow #9 of the Cincinnati Bengals throws a pass during the 33-25 win against Jacksonville Jaguars at Paul Brown Stadium on October 04, 2020 in Cincinnati, Ohio. (Photo by Andy Lyons/Getty Images)

In this catfight nobody cares about, Boring Joe Burrow became the first rookie to throw for 300 yards in each of his first three games, finally got his first NFL victory and didn’t care enough to keep the memento. It would be a crime if Cincinnati never puts a winning team around this guy.

Nobody would mistake Brett Rypien for his uncle Mark (other than Vic Fangio, anyway), but he won his first NFL start thanks to a sick play from rookie Jerry Jeudy and six sacks from the same defense that allowed Sam Darnold to look like Lamar Jackson. The only justice would have been for these teams to tie so they’d both still be winless.

Aaron Lynch comes out of retirement, looks to rejoin Jaguars