A bad impersonation, an even worse fashion statement and the wrong kind of Thanksgiving spread. ‘Tis the season for the NFL Week 13 Recap.

Seattle won this game long before the triple zeros. With the pregame Sonics intro, the in-game TD celebration above and the fact that Kirk Cousins seems destined to never win on Monday Night Football, it never felt like the Seahawks weren’t going to win. So suddenly, Seattle’s in the mix for homefield advantage while Minnesota’s hopes to win their division took a huge hit. 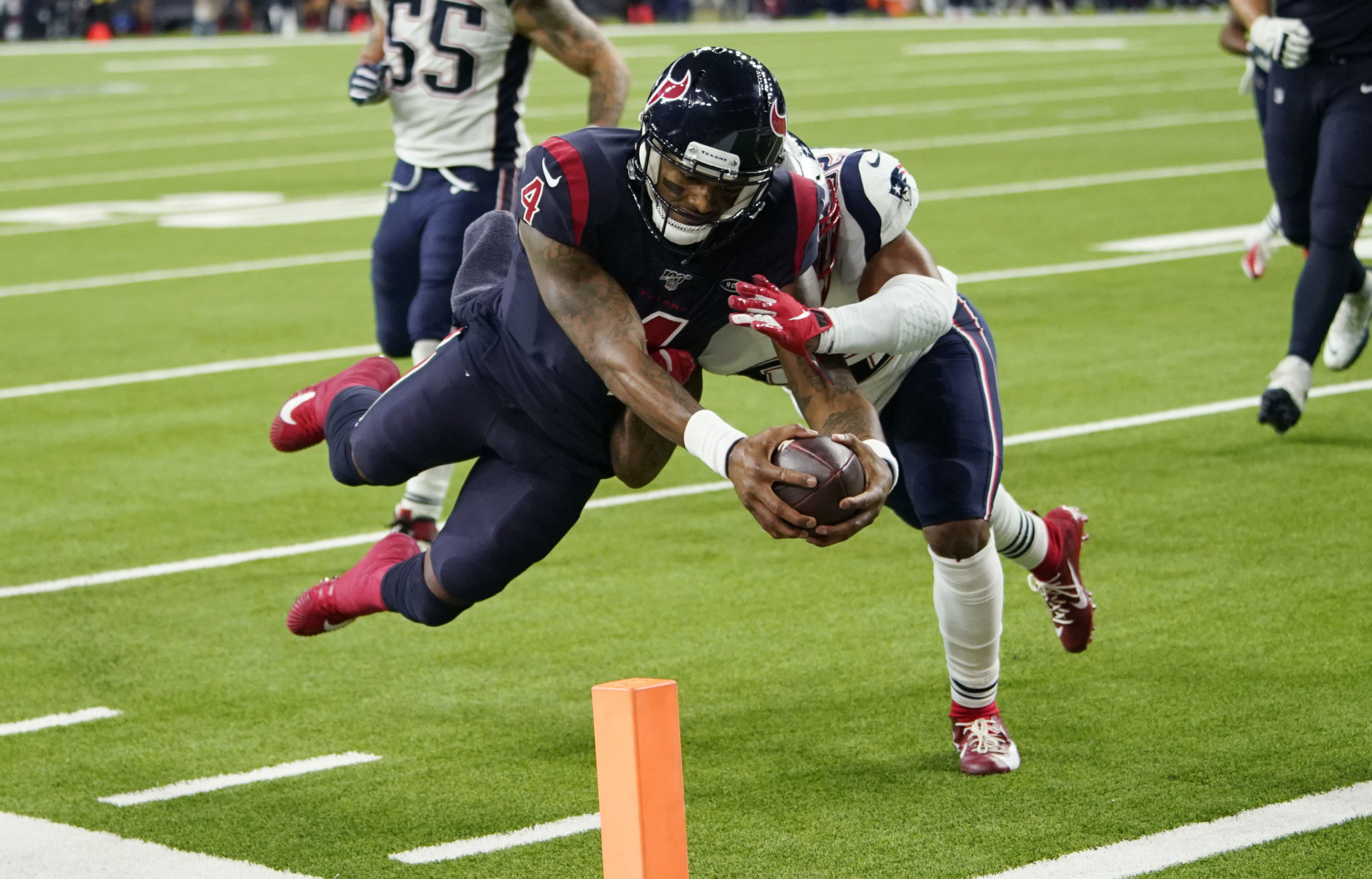 2/16
Houston Texans quarterback Deshaun Watson, #4, dives past New England Patriots outside linebacker Elandon Roberts, #52, to score a touchdown during the second half of an NFL football game Sunday, Dec. 1, 2019, in Houston.

Blame it on a flu bug or a Bill Belichick assistant finally beating the odds, but Tom Brady looked ordinary and the vaunted Patriots defense did little to slow down Deshaun Watson’s run of primetime dominance. New England’s dynasty has been prematurely eulogized before, but they’re a home loss to Kansas City away from getting swept by other AFC division leaders and setting up a lot of questions over whether they can hang on to win their division, let alone conference. 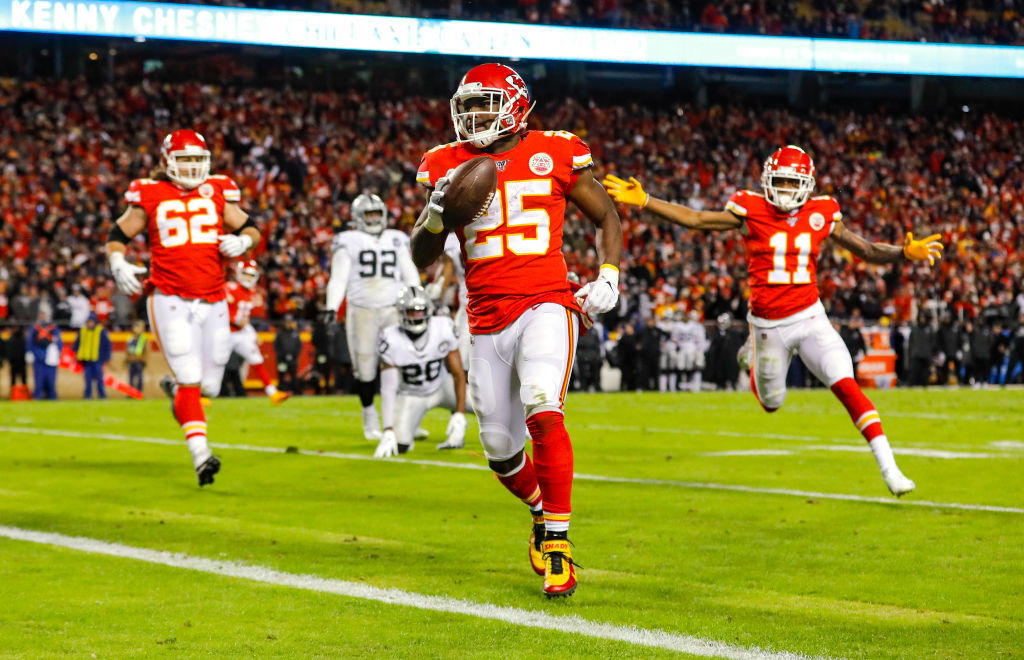 3/16
KANSAS CITY, MO — DEC. 1: LeSean McCoy, #25, of the Kansas City Chiefs runs into the end zone for a 4-yard touchdown in the third quarter against the Oakland Raiders at Arrowhead Stadium on Dec. 1, 2019 in Kansas City, Missouri.

Kansas City dominated its first penalty-free game in 45 years, while Oakland has lost four straight road games by an average of 35.8 points per game, laying back-to-back turds at a time when they were still in contention for the AFC West title. This division race is over. 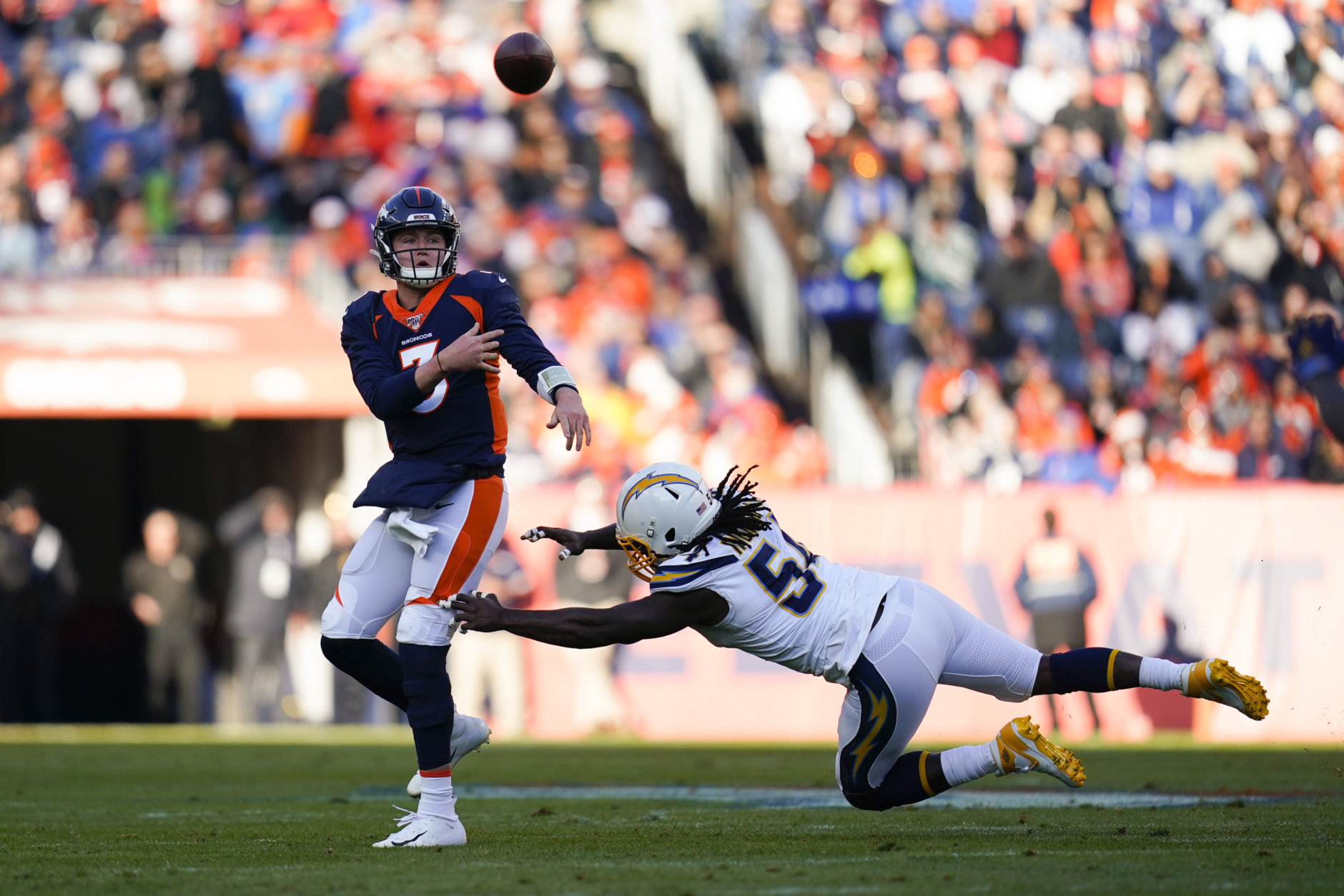 Even though this result had more to do with the Chargers’ uncanny ability to blow games late and with stunning regularity, Drew Lock’s debut victory made Denver the first team in NFL history to have two quarterbacks start and win their NFL debuts in the same season. Now, if John Elway could actually find a QB worthy of starting multiple games, the Broncos might actually be a good team again. 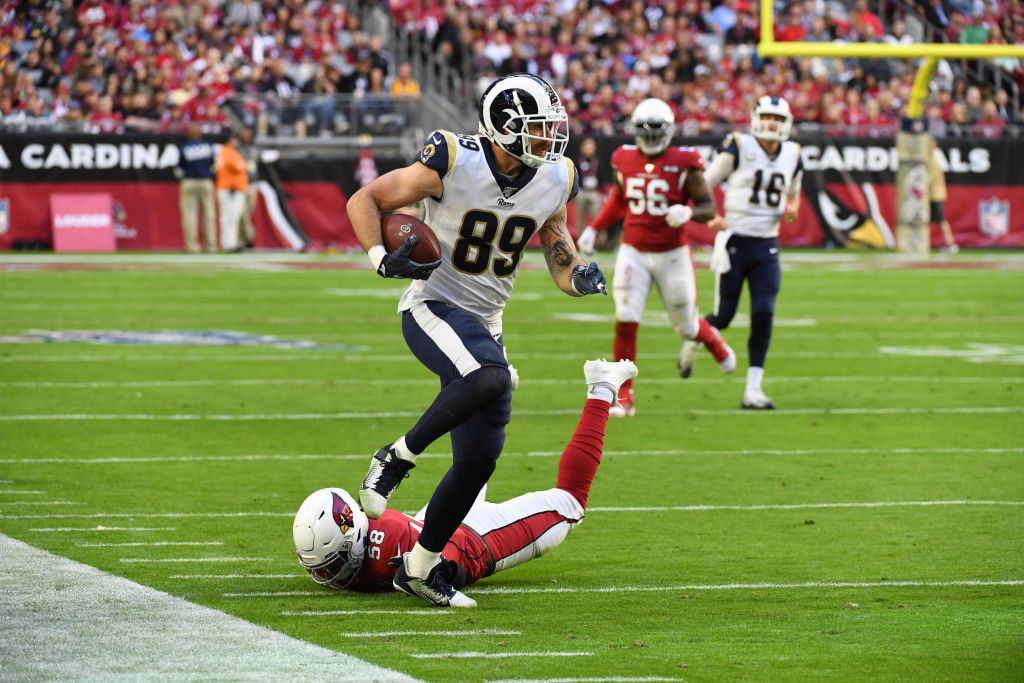 5/16
GLENDALE, ARIZONA — DEC. 1: Tyler Higbee, #89, of the Los Angeles Rams runs with the ball against the Arizona Cardinals during the second quarter at State Farm Stadium on Dec. 1, 2019 in Glendale, Arizona. Rams won 34-7.

But the Rams offense — and Jared Goff in particular — finally looked like the unit that led L.A. to the Super Bowl last year. Feasting on the league’s worst pass defense is all well and good, but Goff and company need to have strong showings against the Seahawks, Cowboys and 49ers the next three weeks or else their season will be over before the Week 17 rematch with the Cardinals. 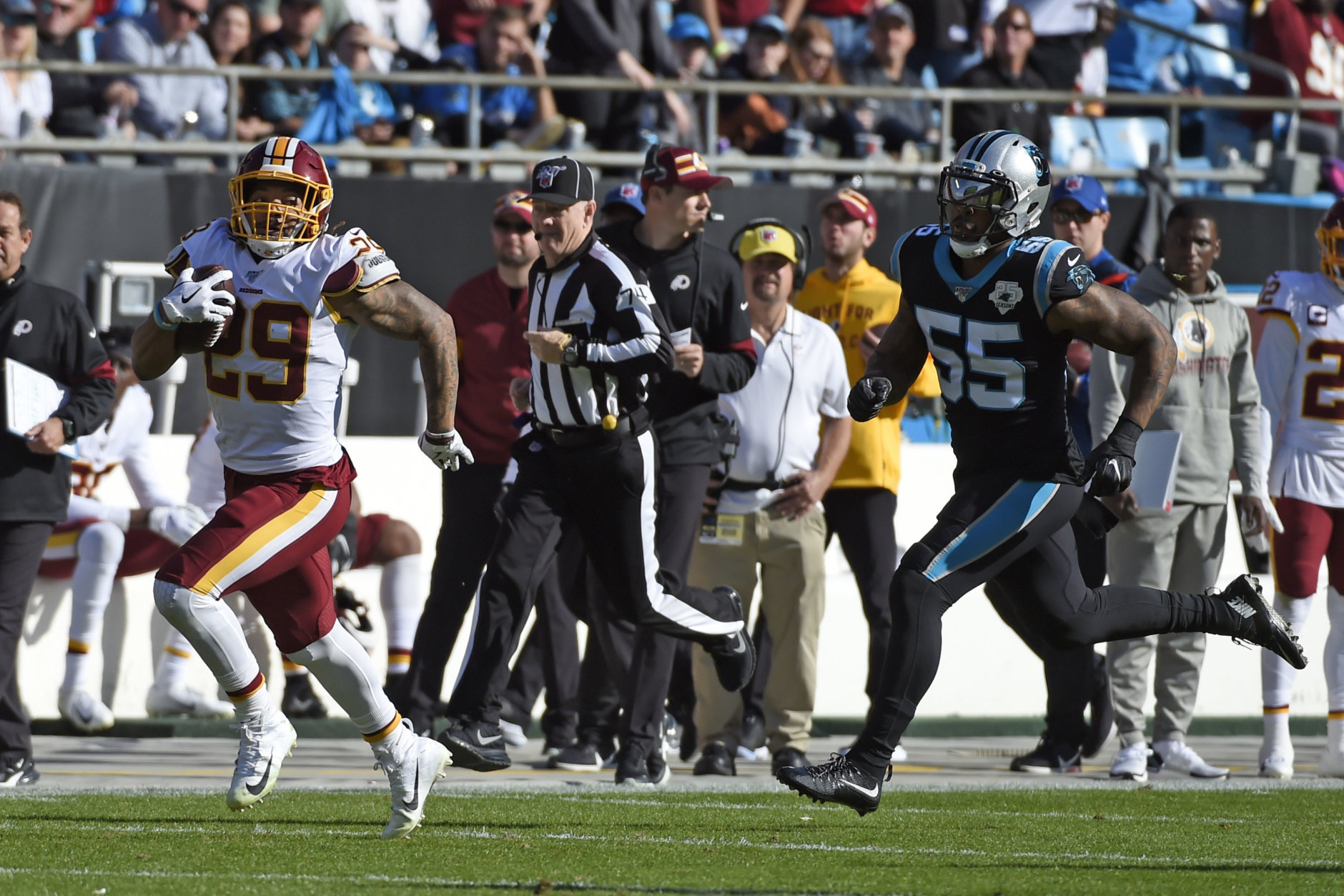 The Redskins got the breakout game from Derrius Guice they’ve been waiting for. Fabian Moreau grabbed his third interception in the last two games and rookies Montez Sweat (1.5 sacks) and Kelvin Harmon (51 yards on three catches) had solid outings. If this organization ever got some worthwhile leadership, their future would actually be kinda bright. 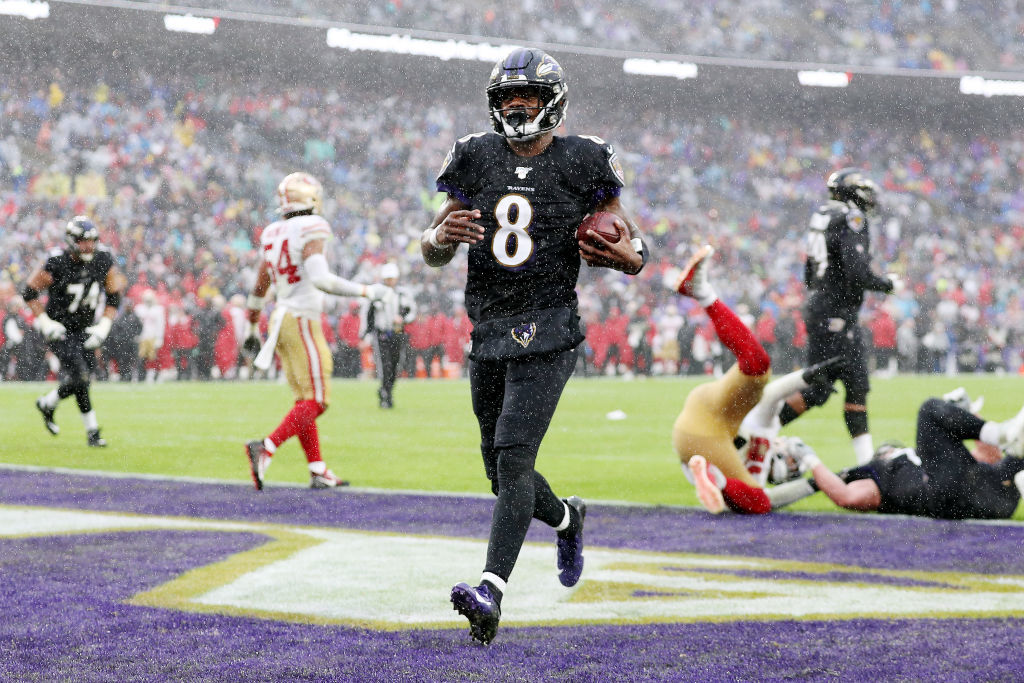 7/16
BALTIMORE, MARYLAND — DEC. 1: Lamar Jackson, #8, of the Baltimore Ravens rushes for a 1-yard touchdown during the second quarter against the San Francisco 49ers at M & T Bank Stadium on December 01, 2019 in Baltimore, Maryland.

In an unprecedented late-season matchup between heavyweights, Lamar Jackson again turned in a highlight-reel performance to create a new stat and lead Baltimore to franchise records for touchdowns in a season (49), consecutive wins (8), and best 12-game start to a season at 10-2. The Super Bowl talk is absolutely warranted and everyone — even the team that lost — wants to see a rematch of this game. 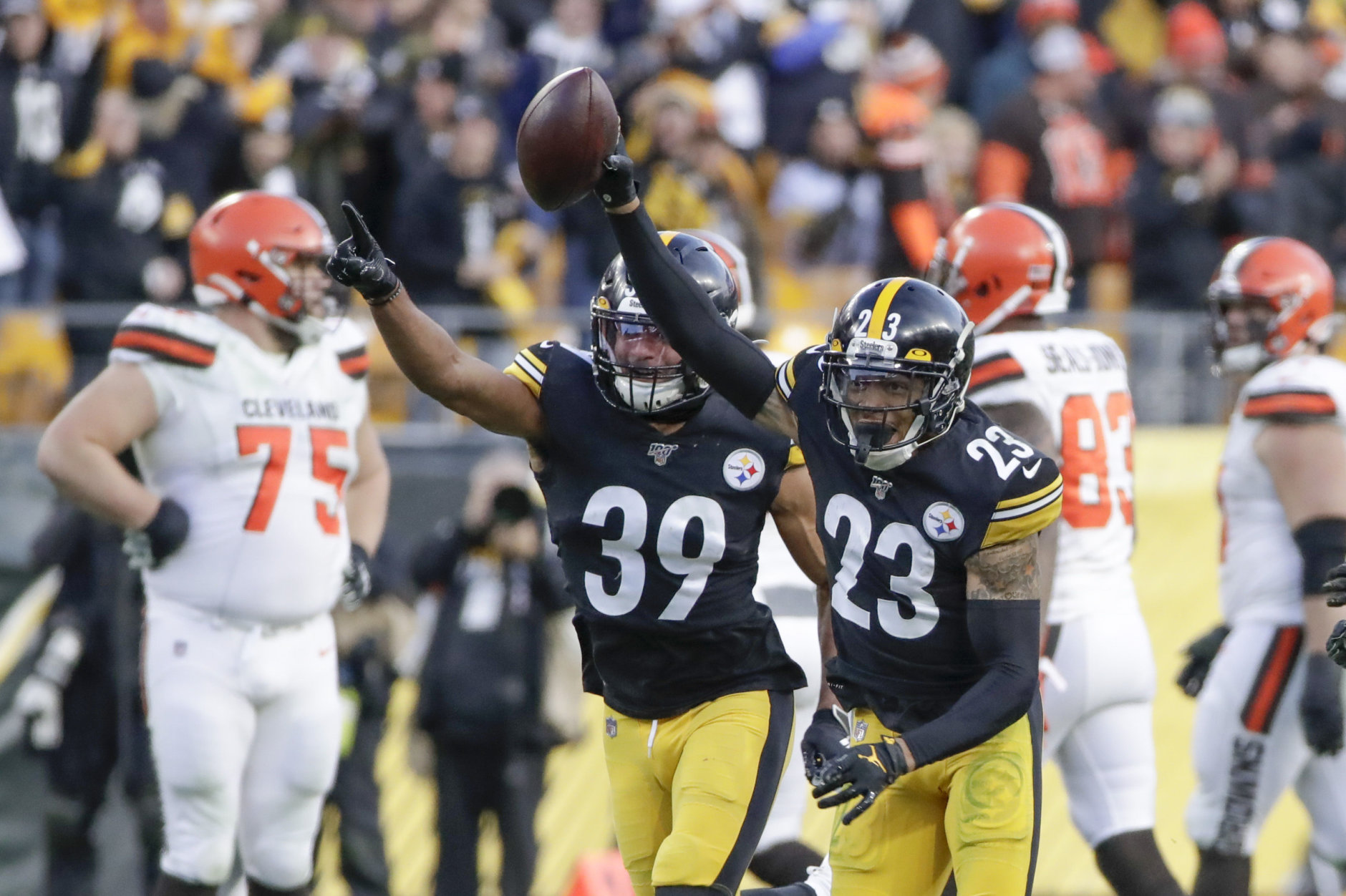 8/16
Friendly grad and Pittsburgh Steelers cornerback Joe Haden, #23, (right) celebrates with free safety Minkah Fitzpatrick , #39, after making an interception against the Cleveland Browns during the second half of an NFL football game, Sunday, Dec. 1, 2019, in Pittsburgh. The Steelers won 20-13.

In the predictably contentious rematch of the awful Thursday Night brawl two weeks ago, Freddie Kitchens stoked the flames with some questionable apparel and led the Browns to slaughter in Pittsburgh for the 16th straight trip there. Rarely has a head coach looked so much like a one-and-done.

And rarely has a coach looked more like Coach of the Year than Mike Tomlin does now. His third-string QB slung it like he said he would and his injury-depleted team continues to control the last wild card in AFC. 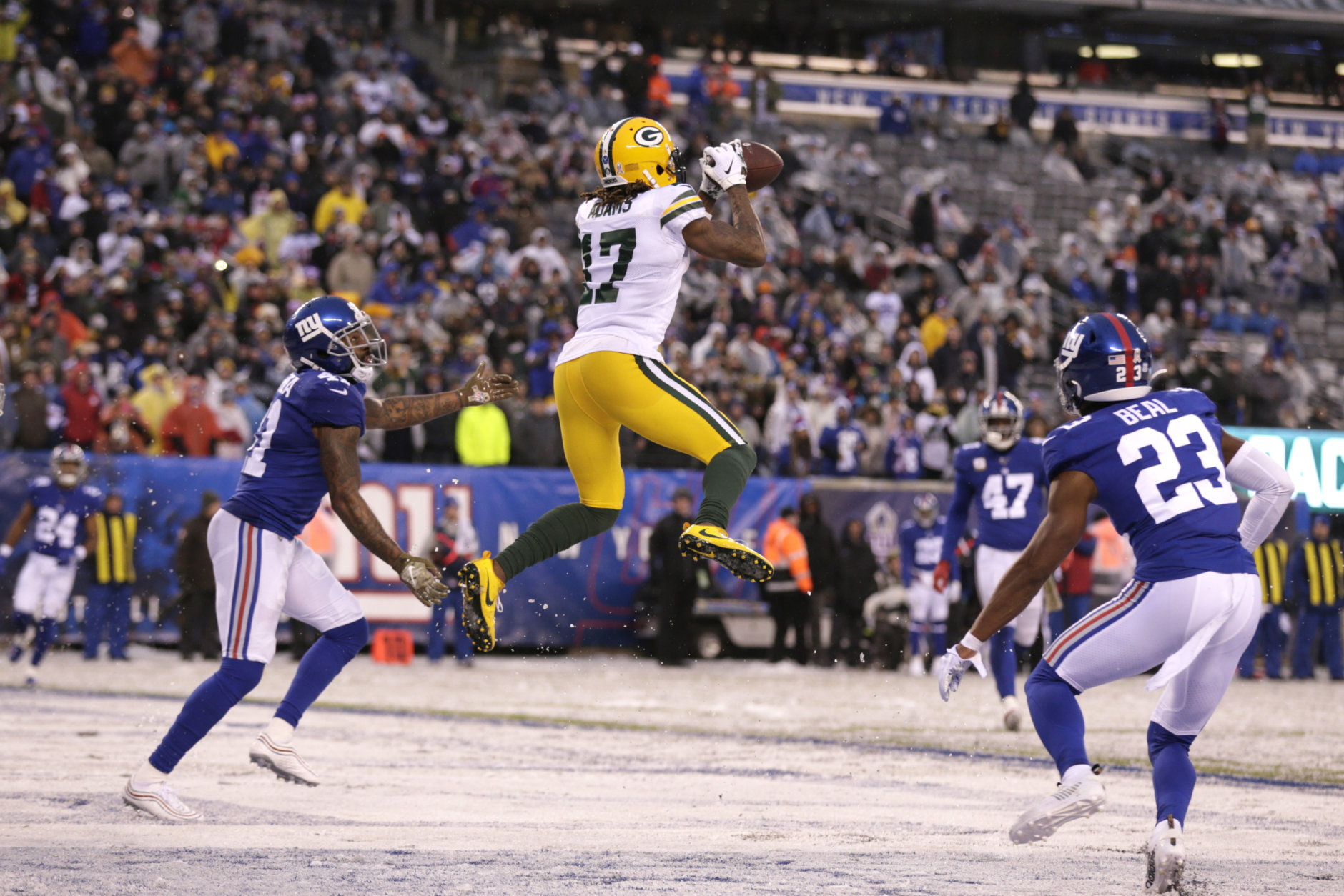 9/16
Green Bay Packers’ Davante Adams (17) catches a touchdown pass during the second half of an NFL football game against the New York Giants, Sunday, Dec. 1, 2019, in East Rutherford, N.J.

Pat Shurmur is the first Giants coach since Ray Perkins to lose 10 games in each of his first two seasons. If Big Blue’s eight-game losing skid spirals into 12, even Shurmur can’t see him back for a third shot at turning things around. 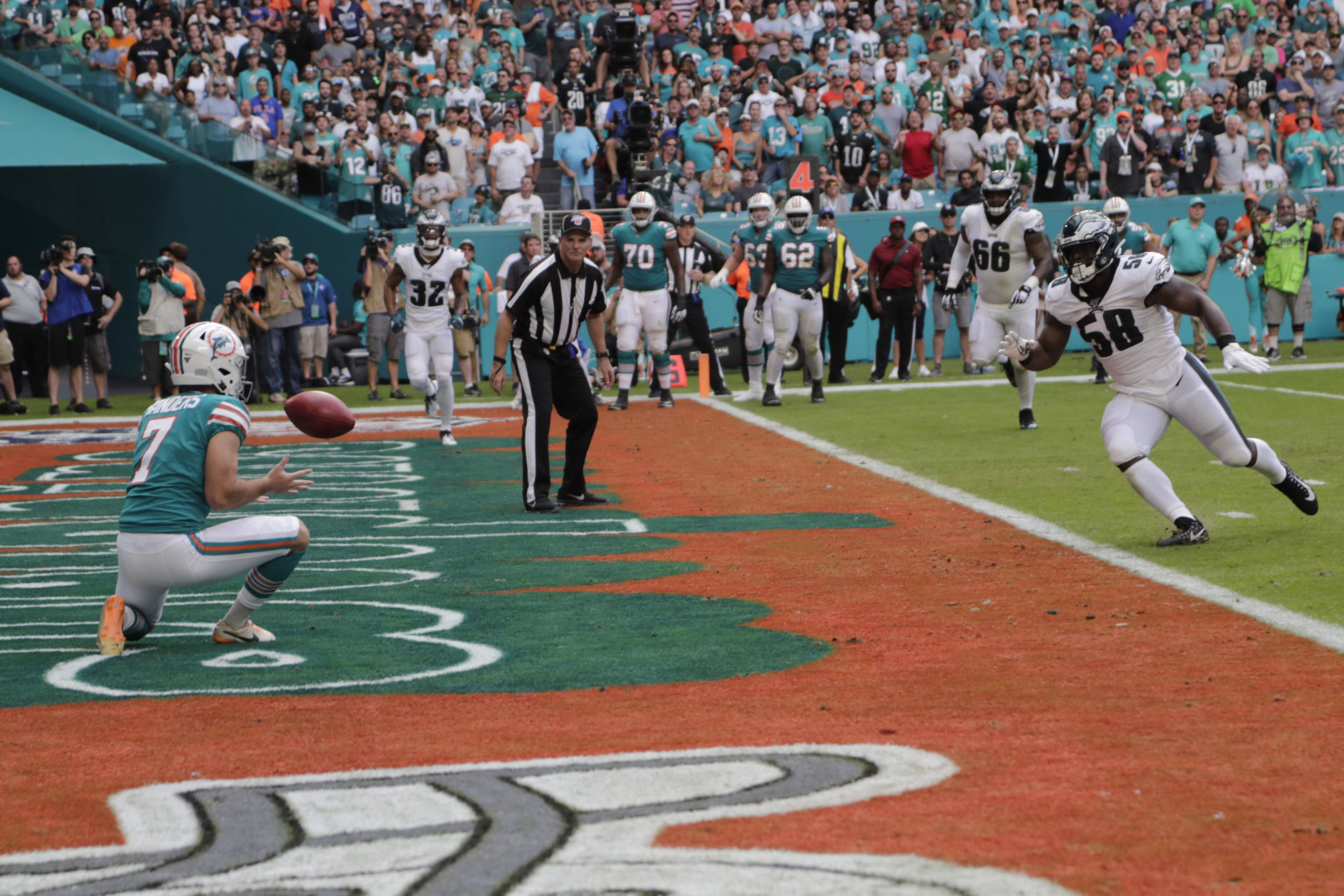 10/16
Miami Dolphins kicker Jason Sanders (7) catches a touchdown pass, during the first half at an NFL football game against the Philadelphia Eagles, Sunday, Dec. 1, 2019, in Miami Gardens, Fla.

Look, Dallas can’t get out of its own way either but if Philadelphia can’t beat the hapless Dolphins in December (they gave up the first touchdown to a kicker in 42 years!), it’s hard to see them catching the Cowboys with this awful fourth-quarter track record.

Derrick Henry will NOT be denied! @KingHenry_2 #Titans #TENvsIND

The Ryan Tannehill Project continues to pay off for Tennessee, but the Titans will only go as far as Derrick Henry will carry them — and the defenders who foolishly trying to tackle him with one arm. 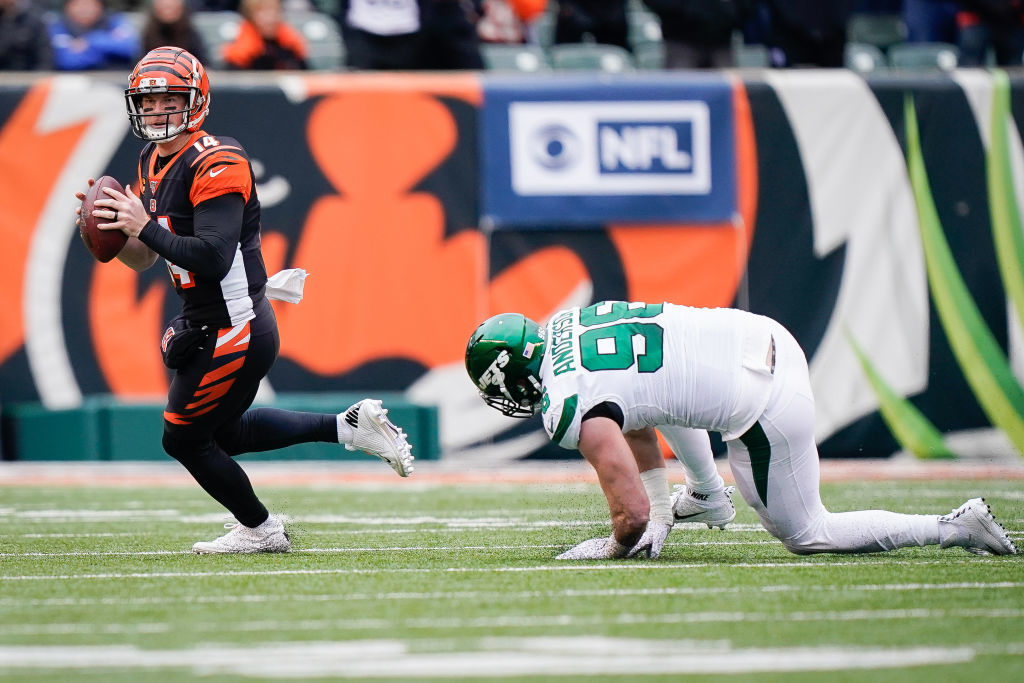 12/16
CINCINNATI, OH — DEC. 1: Andy Dalton #14 of the Cincinnati Bengals scrambles with the ball during the first half of NFL football game against the New York Jets at Paul Brown Stadium on December 1, 2019 in Cincinnati, Ohio.

So much for Ghostbusters. Sam Darnold couldn’t engineer even one touchdown drive against the NFL’s last winless team and Le’Veon Bell continued to be underutilized. Consider this the death blow to their utterly confusing season.

But give it up for Cincinnati. Andy Dalton’s new perspective in his return from the bench led him to the top of the franchise’s all-time touchdown list and makes the Bengals a dangerous draw (twice) for the Browns down the stretch. 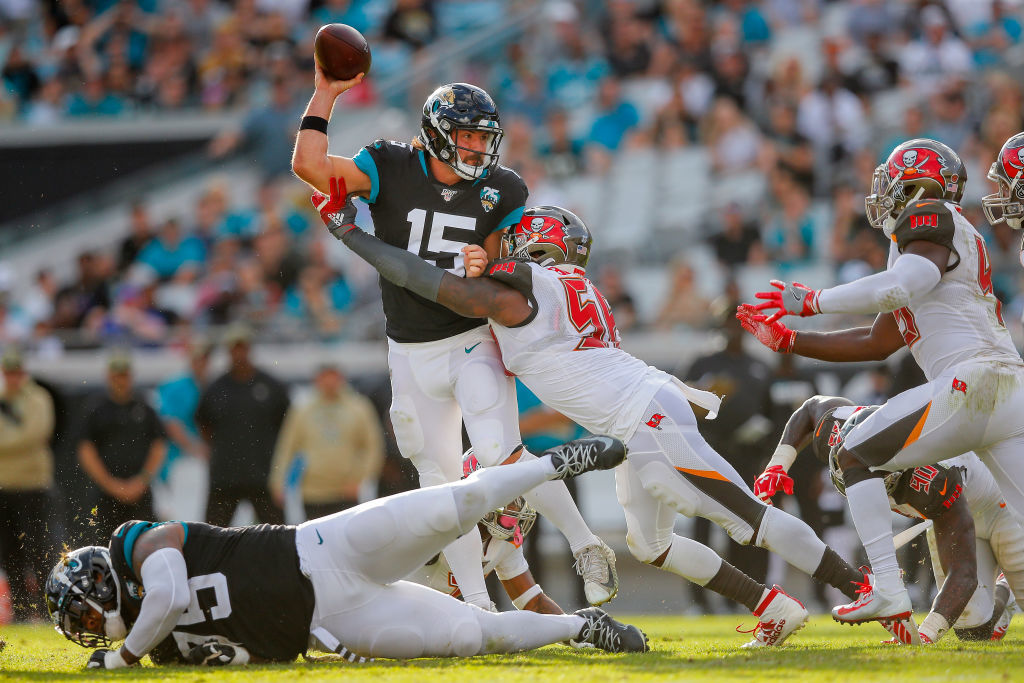 13/16
JACKSONVILLE, FLORIDA — DEC. 1: Gardner Minshew #15 of the Jacksonville Jaguars throws a pass during the fourth quarter of a game against the Tampa Bay Buccaneers at TIAA Bank Field on December 01, 2019 in Jacksonville, Florida.

On a day when The Human Turnover actually refrained from throwing an interception, Jacksonville decided Minshew Magic trumps the Nick Foles brand of magic that apparently only works in Philadelphia. I’ll bet the quarterback change won’t be the only one made by the Jags in the coming weeks.

I just stumbled across the German broadcast of Shy Tuttle stiff-arming Matt Ryan into dust and it’s everything 😂😂😂#Saints pic.twitter.com/giR5aBKOR5

Behold, the Atlanta Falcons’ 2019 season encapsulated in one play.

As further evidence hosting Thanksgiving is overrated, Matt Ryan was sacked a career-high nine times on a day when the road teams swept the Turkey Day slate. Cameron Jordan registered a franchise-record four sacks and Taysom Hill highlighted the other two phases to clinch New Orleans’ third straight NFC South title and make the Saints the first team to march into the playoffs. 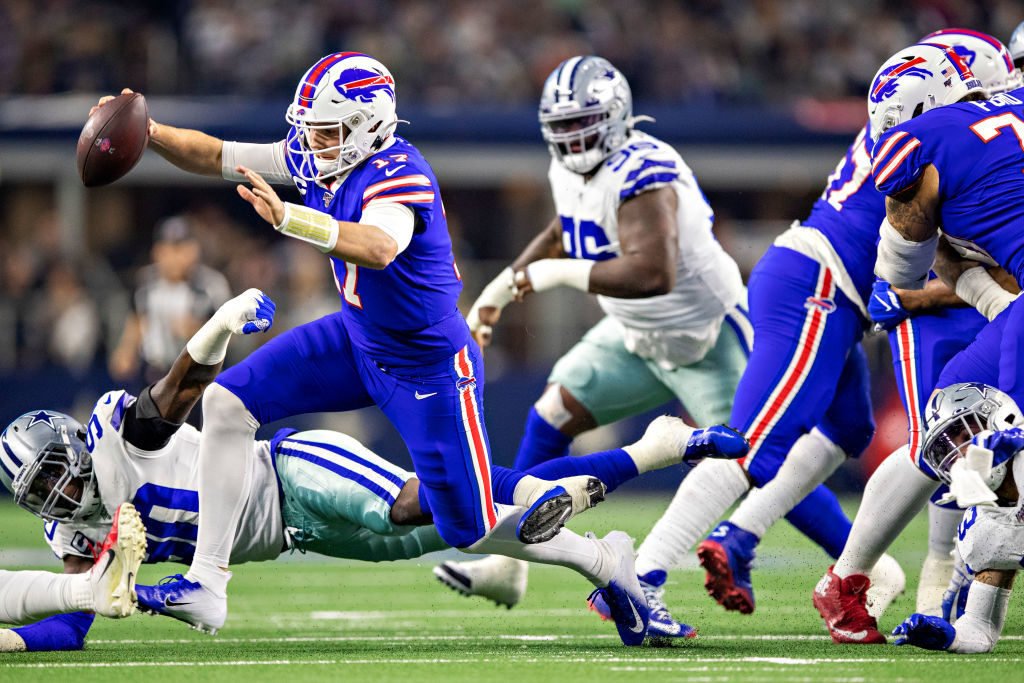 15/16
ARLINGTON, TX — NOV. 28: Josh Allen #17 of the Buffalo Bills runs the ball to avoid the rush in the first quarter on Thanksgiving Day during a game against the Dallas Cowboys at NRG Stadium on November 28, 2019 in Arlington, Texas.

In a battle of teams with winning records despite an inability to beat other teams with winning records, Josh Allen played like Superman, Cole Beasley scored on his former team and Buffalo solidified its place as the top AFC wild card, while the only wild card in Dallas is whether Jason Garrett can finish well enough to warrant a return to Jerry Jones’ doghouse in 2020. 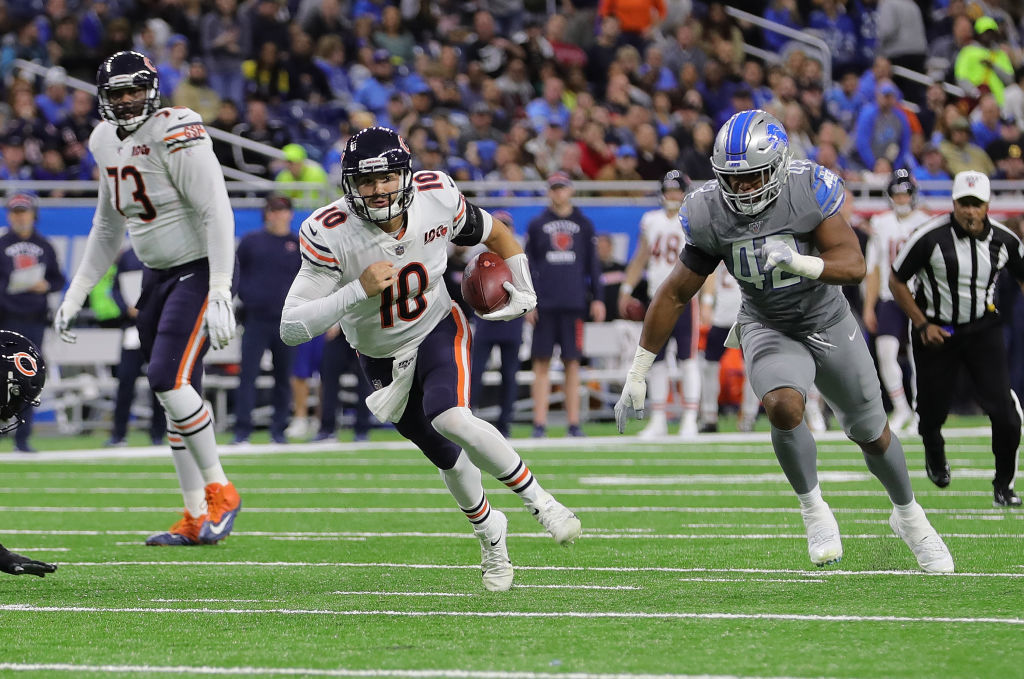 16/16
DETROIT, MI — NOV.  28: Mitchell Trubisky #10 of the Chicago Bears runs for a first down during the second quarter of the game against the Detroit Lions at Ford Field on November 28, 2019 in Detroit, Michigan.

Congrats, Mitch Trubisky. You lit up a bad Lions defense and outdueled some guy named David Blough making his historic-yet-futile first start. Now go justify your draft status by doing it again against Dallas, Green Bay, Kansas City and Minnesota so Chicago has a chance at a return to the playoffs.