As the nation gears up to commemorate the 50th anniversary of the first moon landing this month, space enthusiasts and casual visitors can see an artifact from the Apollo 11 mission somewhere unexpected in Northwest D.C.

A rock plucked from the moon’s Sea of Tranquility is embedded in the Washington National Cathedral’s Space Window. Head down the church’s main aisle, and it’s about halfway down on the right.

“We’ve had the rock since 1974,” said National Cathedral archivist Elody Crimi. “The rock itself is about 2 3/8 inches wide and weighs 7.18 grams.”

The cathedral’s display of the moon rock serves to incorporate stories of faith and American ideals and aspirations. 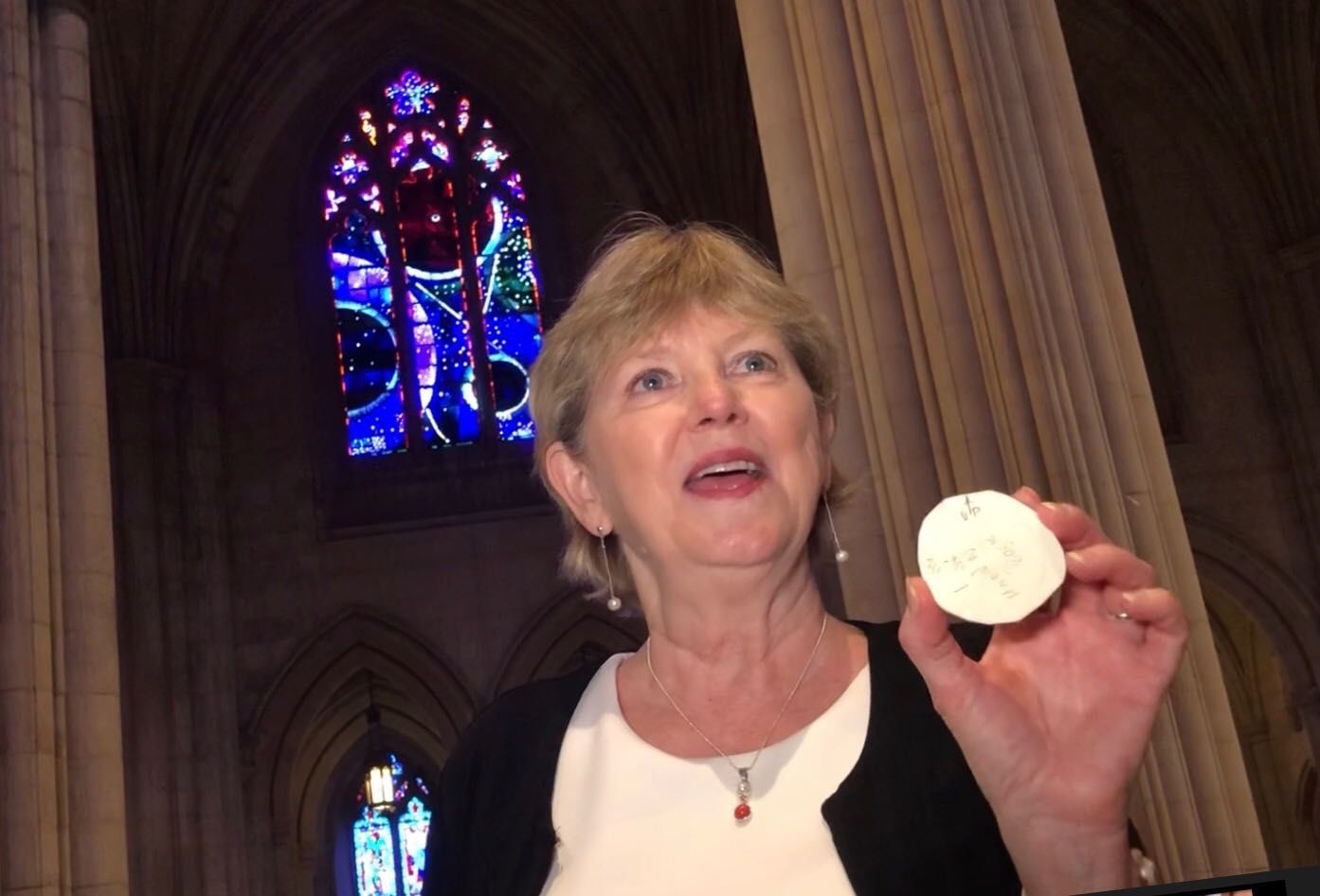 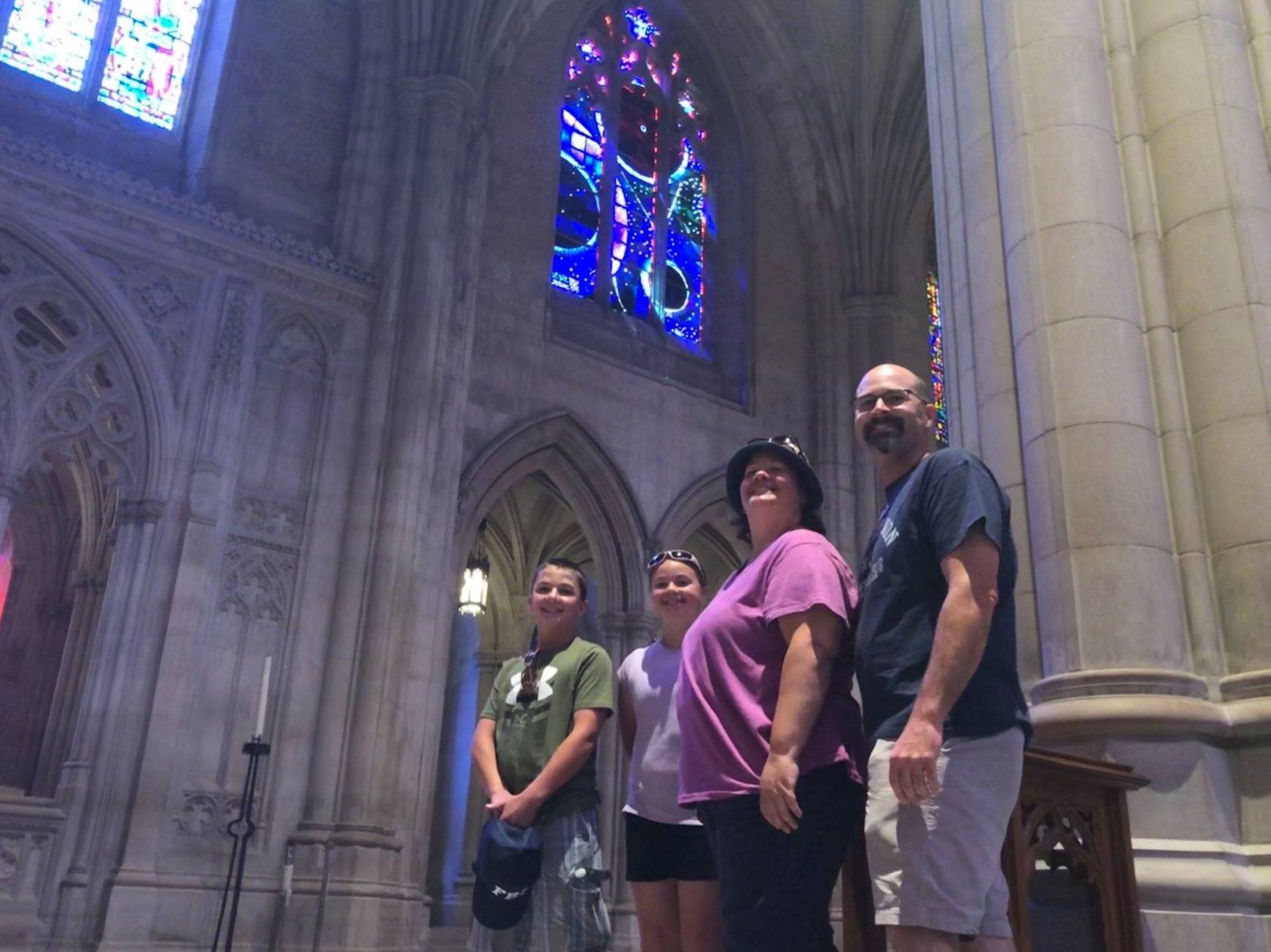 2/7
Jack Davis (left), 13, of Michigan, and sister Allie, 11, and parents Karen and Rick Davis all took in the Space Window at the National Cathedral. (WTOP/Kristi King)

“President (Richard) Nixon was so delighted to grant a rock to the cathedral, also so it could serve as a shrine to the courage of man in the exploration of space,” Crimi said. 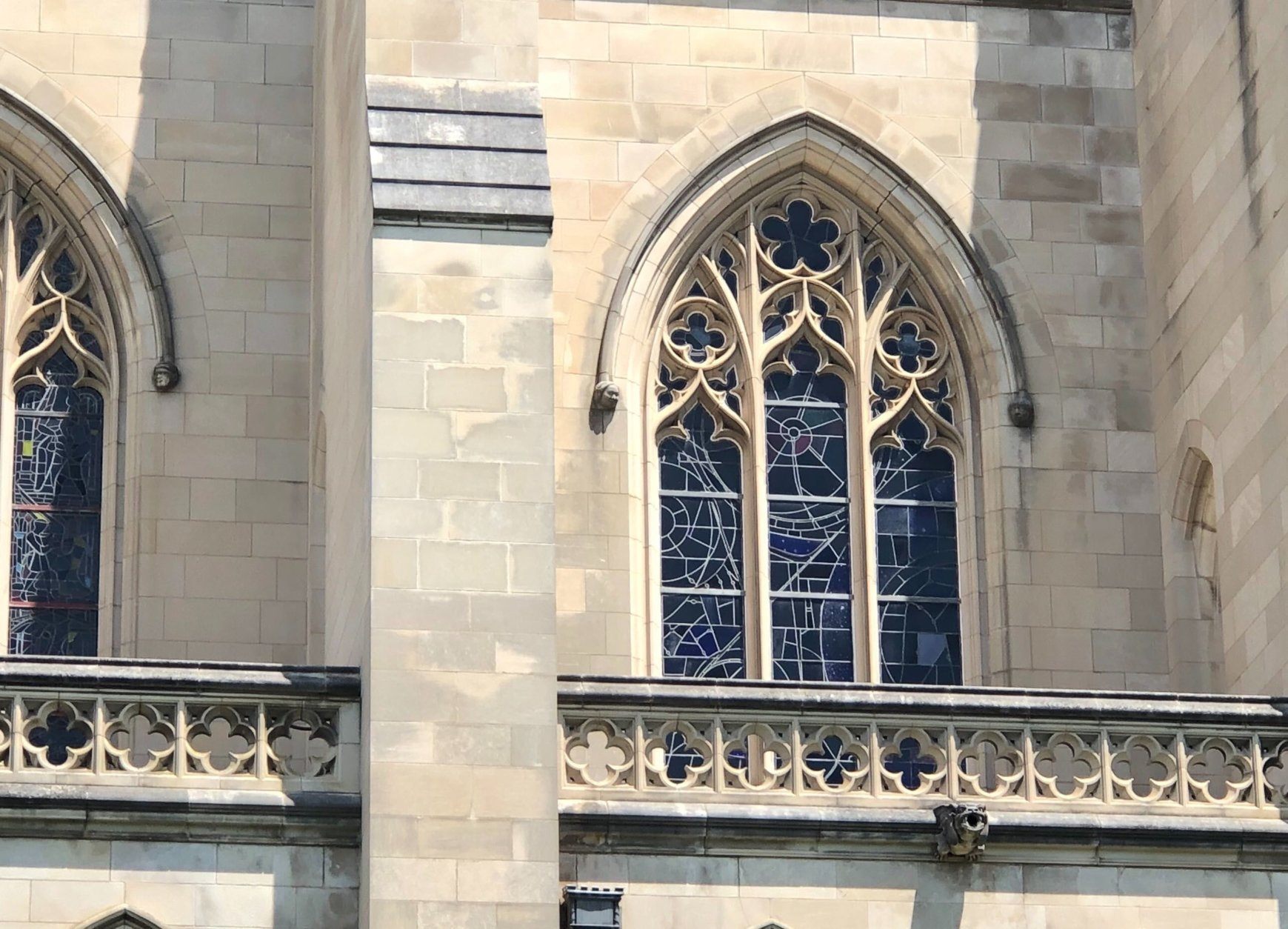 3/7
Here’s what the Space Window looks like from the outside. (WTOP/Kristi King)

There’s a fun fact related to the window you might not hear elsewhere: All the cathedral’s windows used to be plain panes of glass that were changed out with stained glass creations as themes and designs were selected. 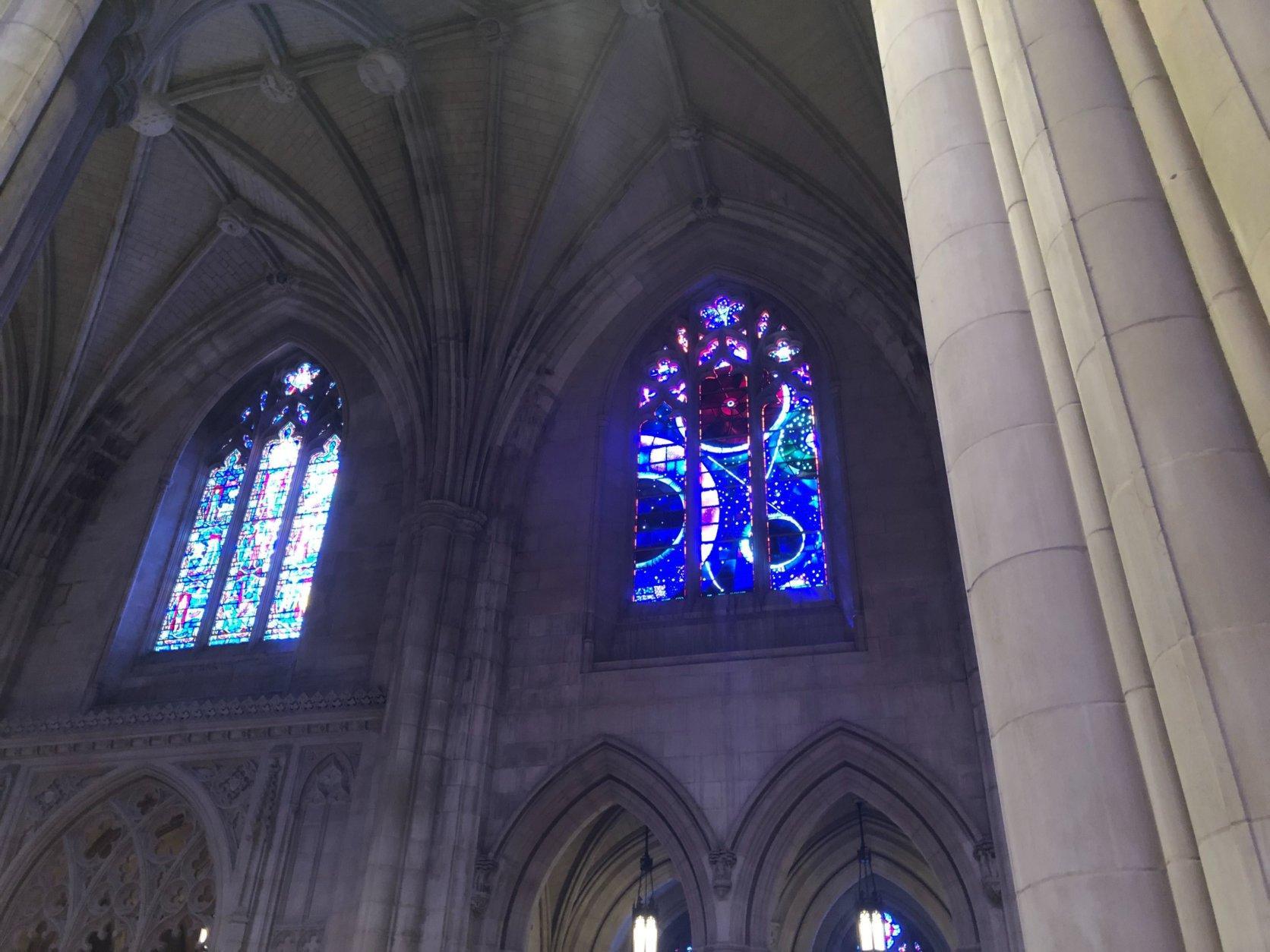 4/7
A view of the Space Window from inside the cathedral. (WTOP/Kristi King)

What’s commonly known now as the “Space Window” is the 13th design that was up for consideration as artists and church leaders went back and forth deciding what image would best depict the themes of science, technology and space. By the 12th round of negotiations, the artist had had enough. 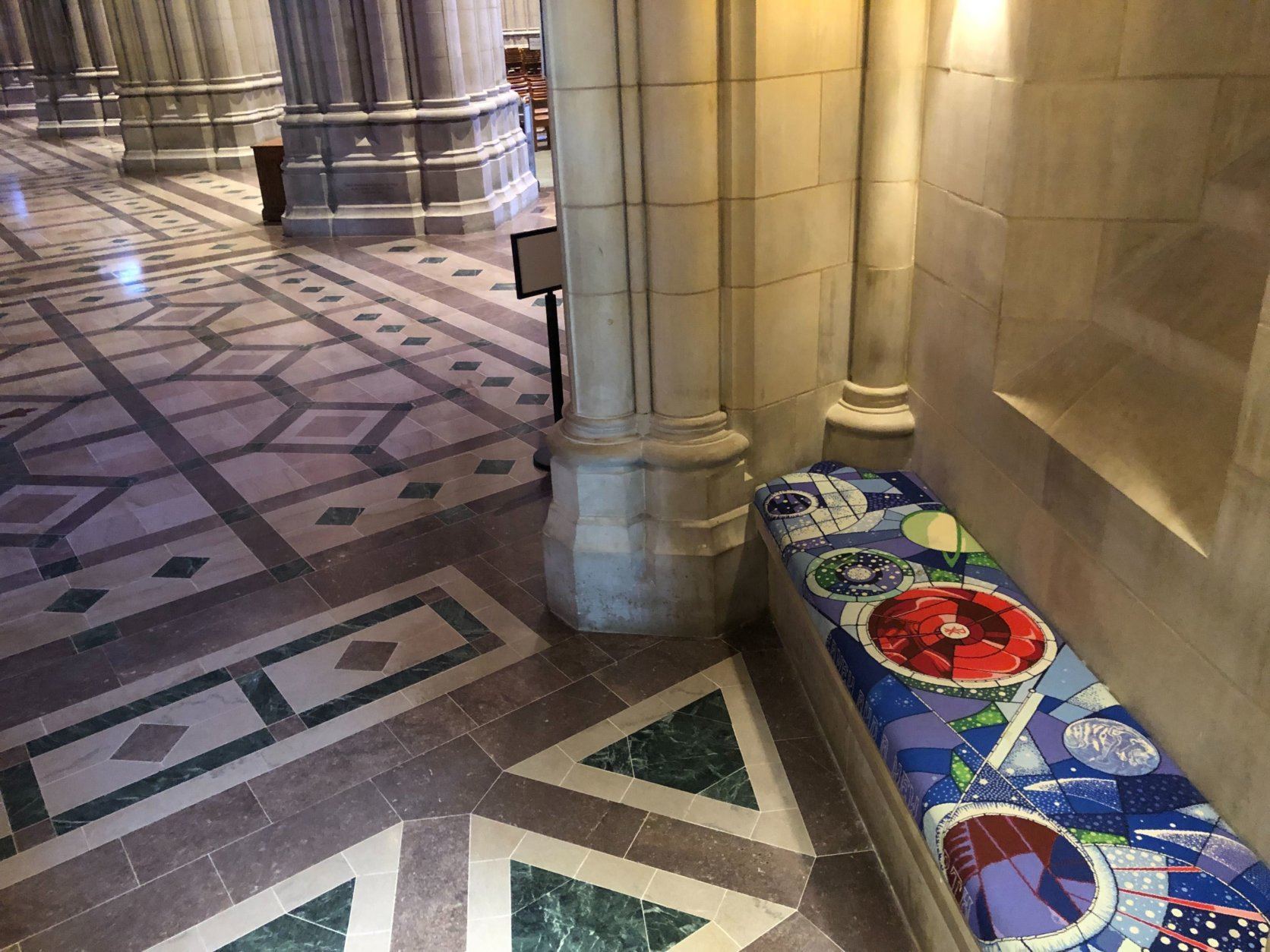 5/7
“And I saw a new heaven and a new earth” is sewn into the front of this cushion, inspired by the Space Window. (WTOP/Kristi King)

“They wanted rocket ships, and this and that, and there was too much stuff in the window,” said Kevin Eckstrom, cathedral director of communications. “So, finally (artist Rodney Winfield) said, ‘I’m going to do an artistic representation.’ He showed it to them, and they said, ‘Yup. That’s exactly what we want.'” 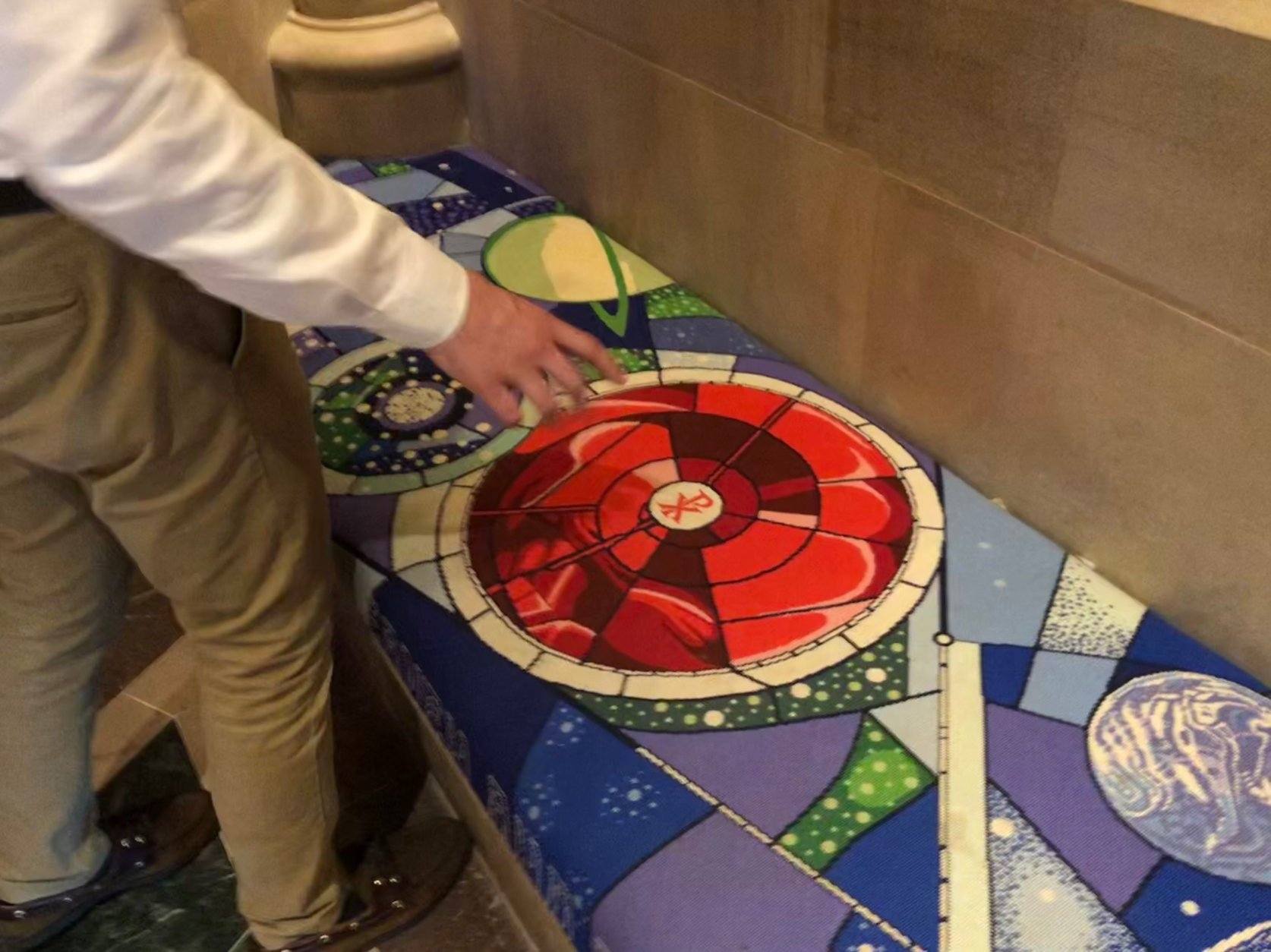 6/7
This cushion depicting the Space Window shows exactly where the moon rock is positioned in the center of the red orb image of the moon. (WTOP/Kristi King)

The window was installed in 1974 while the cathedral was still under construction. When the building’s nave was completed and the national treasure could be appropriately secured, the moon rock was added to the stained glass window in 1976. 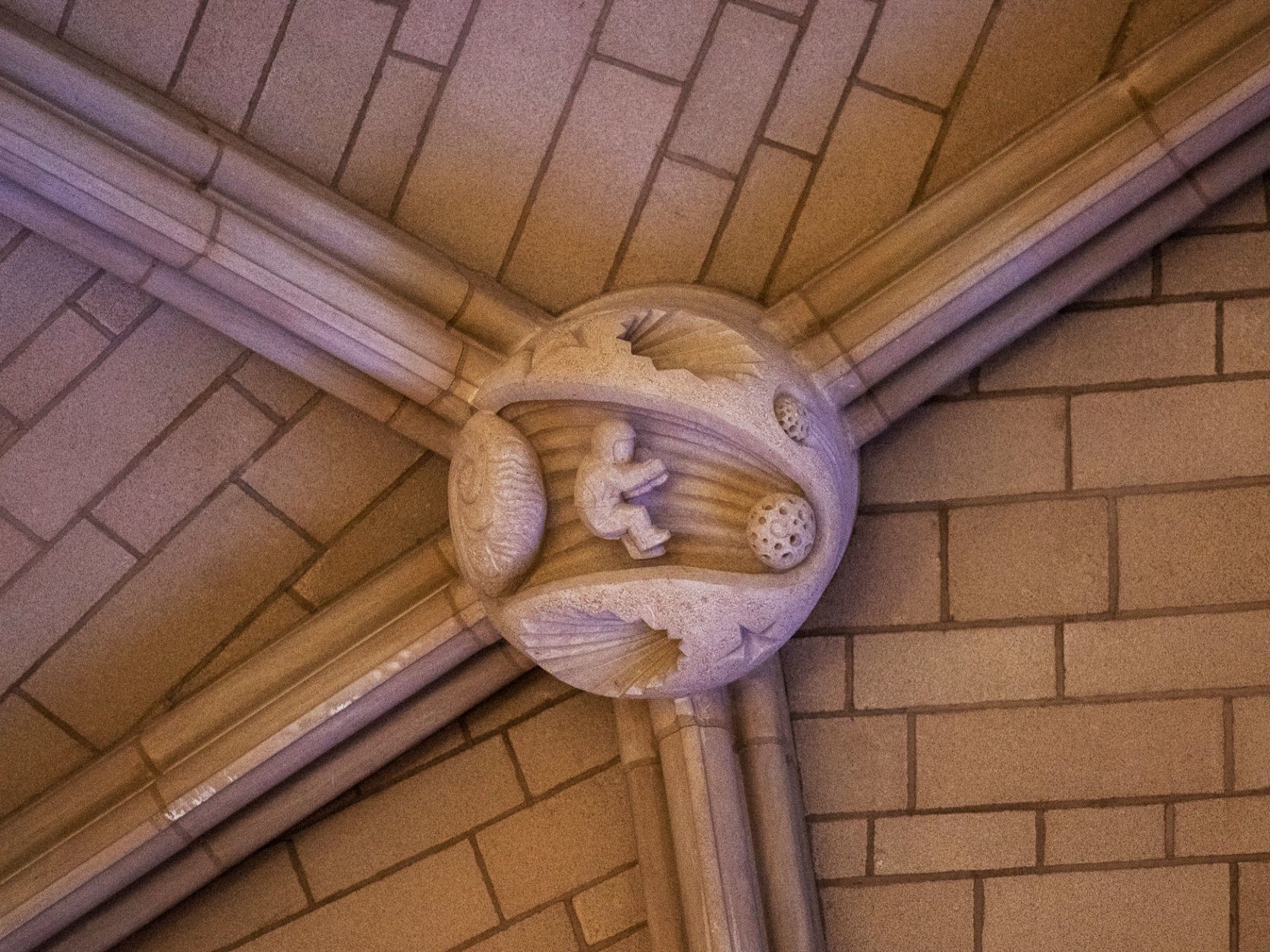 7/7
The round carved stones on the ceiling are called bosses that help to hold the vaulted ceiling together. This one to the left of the Space Window commemorates the first moon walk on July 20, 1969. (Courtesy Danielle E. Thomas)

Download a flyer about the window and the 50th anniversary here.