Car Review: The Land Rover Defender X is ready for snow — and anything else

My experiences off-roading have been limited but highly educational. Once, in the mid-2000s, I found myself at an off-road park in central Pennsylvania. It offered mud pits, crushed cars to drive over if you were so inclined (really), trails to drive on and streams to cross. At one crossing, a guy in a somewhat new Jeep Wrangler had a submerged boulder send the front of his Jeep skyward. The middle of the Jeep then crashed down onto the boulder, causing a massive dent, and some cursing.

The take-away: what you take off-road may well get banged up.

Thus the conundrum of the Land Rover Defender 110, in top-of-the-heap X trim.

This four-door SUV is no doubt a seriously capable machine. Tricks up its sleeve include a suspension that raises and lowers at the flick of a switch, and a special mode that measures the depth of the water you’re driving through (Land Rover says the Defender can ford nearly three feet of water).

But then, who would want to scratch that Eiger Gray paint (or worse)?

Even if your pockets are especially deep, what body shop do you trust to bring this back each time?

Luckily, it excels on the road, too. Acceleration is spirited, thanks to a rather nifty — and complex — 395 HP six-cylinder, which features both a turbocharger and an electric supercharger. A turbocharged four-cylinder is also available.

The interior is coddling, with soft brown-and-black leather seats and with the brown leather extending onto the dash. The center console and door panels go for a “fancy and tough” theme, with woodgrain accents next to exposed bolt heads. It works.

Easy-to-clean rubber floors, underneath carpet floor mats, also remind you this SUV is multipurpose. A panoramic sunroof stretches over the first and second rows of seats (both heated). So-called “Alpine Windows” on the sides of the roof let in even more light. USB ports are absolutely everywhere.

Some frustration surrounds figuring out the touch screen, as well as the joystick-like electronic shifter that can be bumped into as you reach for the screen.

On the outside, the Defender X looks the part, with a blacked out hood that has black “claddings” on either side of it, meant to evoke classic Defenders, but which give this one the appearance of having donned riot gear. Dark wheels wrapped in off-road tires help with the menacing look.

Even though it hampers rear visibility, there is a full-size spare tire hanging off the rear cargo door. Land Rover says this is to make the spare easily accessible off-road, which is true, although they could place it anywhere for all I care — I was just thrilled to see a full-size spare. They’re becoming increasingly rare, as are donut spares, meaning an encounter with a pothole could mean you need a flatbed. And now, COVID-19 restrictions mean you probably can’t ride with the tow truck driver, so you’ll need someone to pick you up, too.

Also from the stuff-that-should-be-brought-back department: The Defender can be had with a front-center jump seat, effectively giving it a bench seat up front. A third row is also optional, but it doesn’t appear to be available with the frontbench.

And don’t forget to budget extra for body damage, if you plan to use it for what it was designed for. 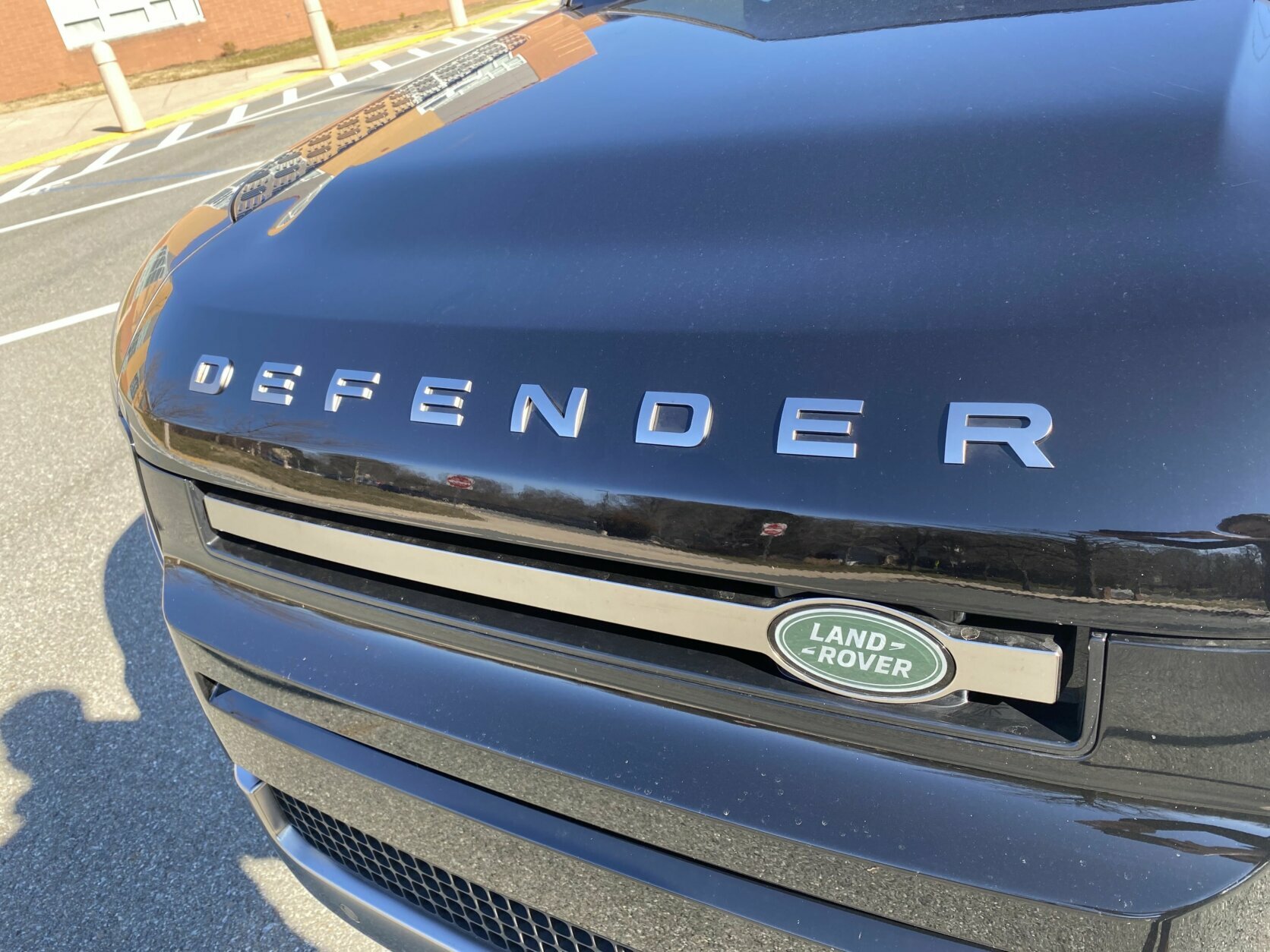 With the amount of DEFENDER badging on this car, there’s no chance anyone will forget what they’re driving. 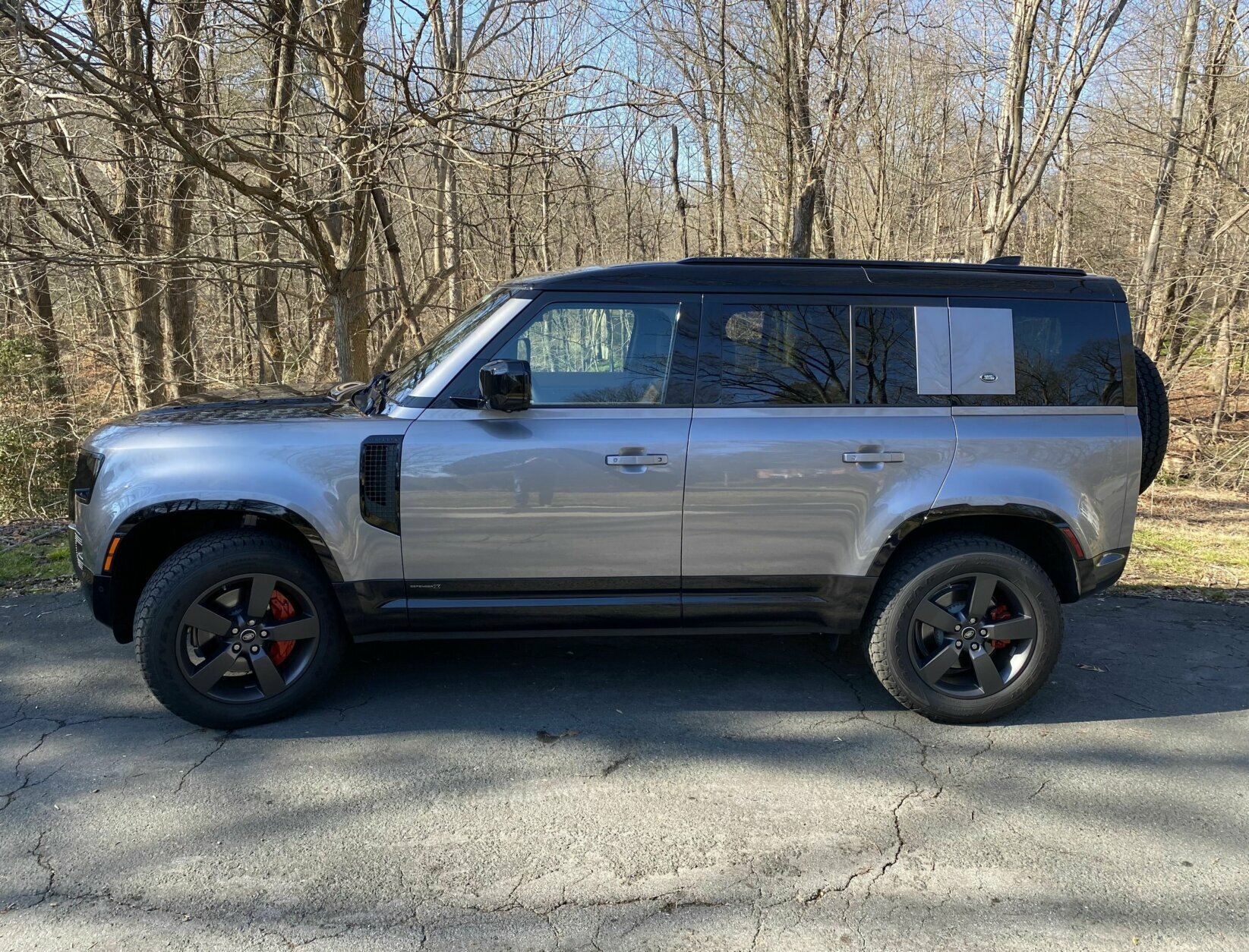 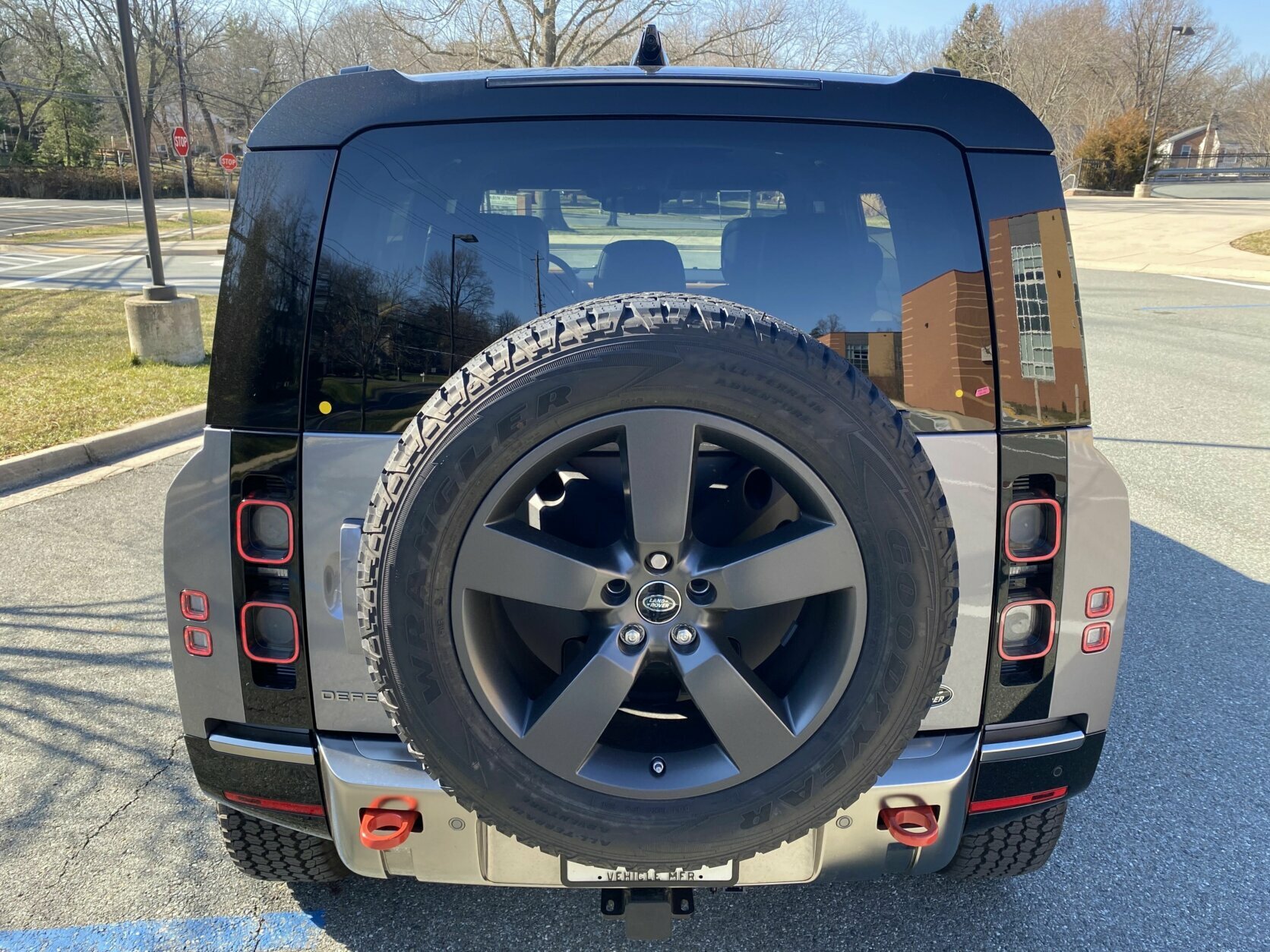 The Defender comes with a full-size spare. 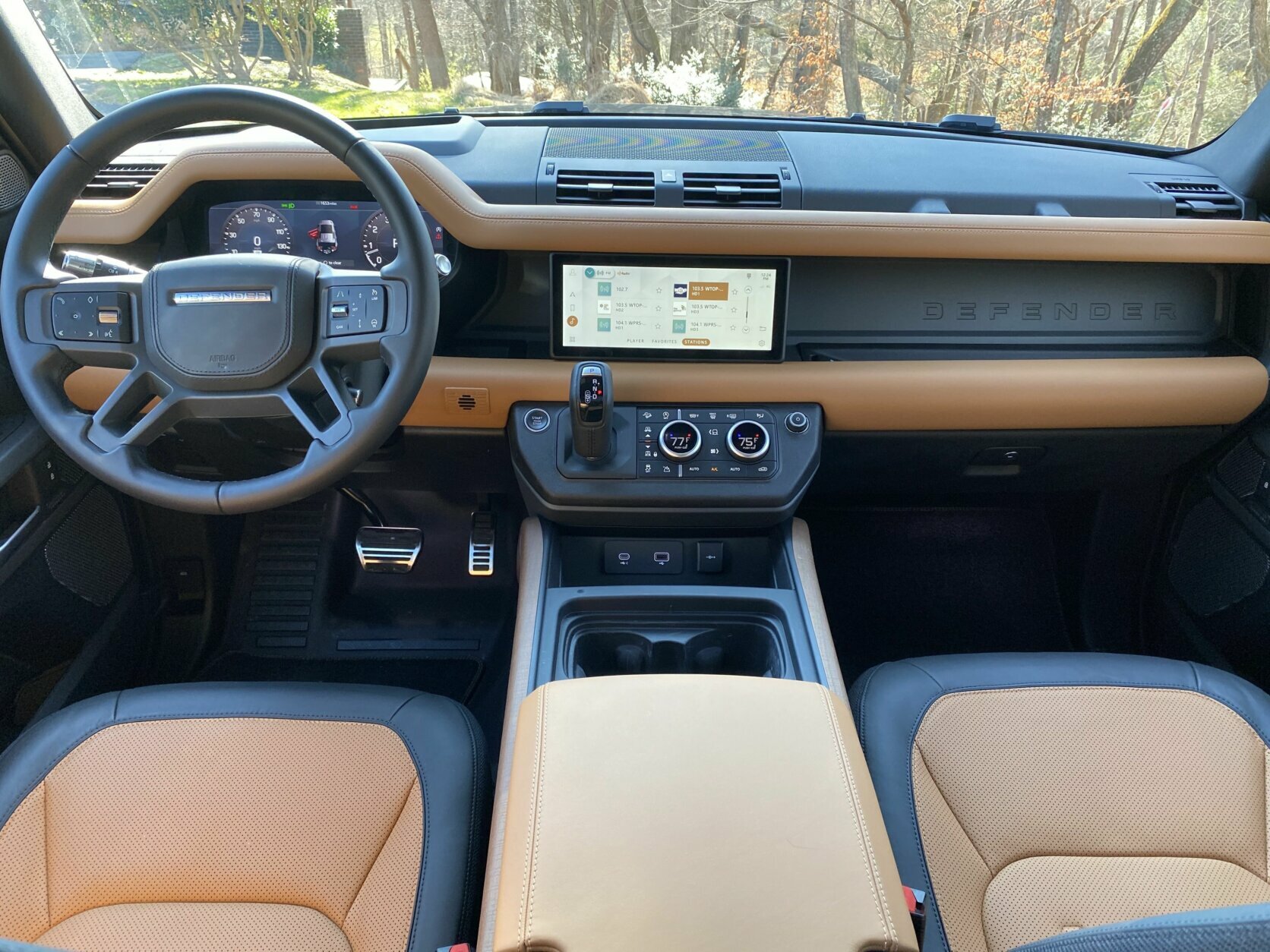 The interior is comfortable and luxurious, but rougher touches like exposed bolts give it an edge that hints at its off-roading capabilities. 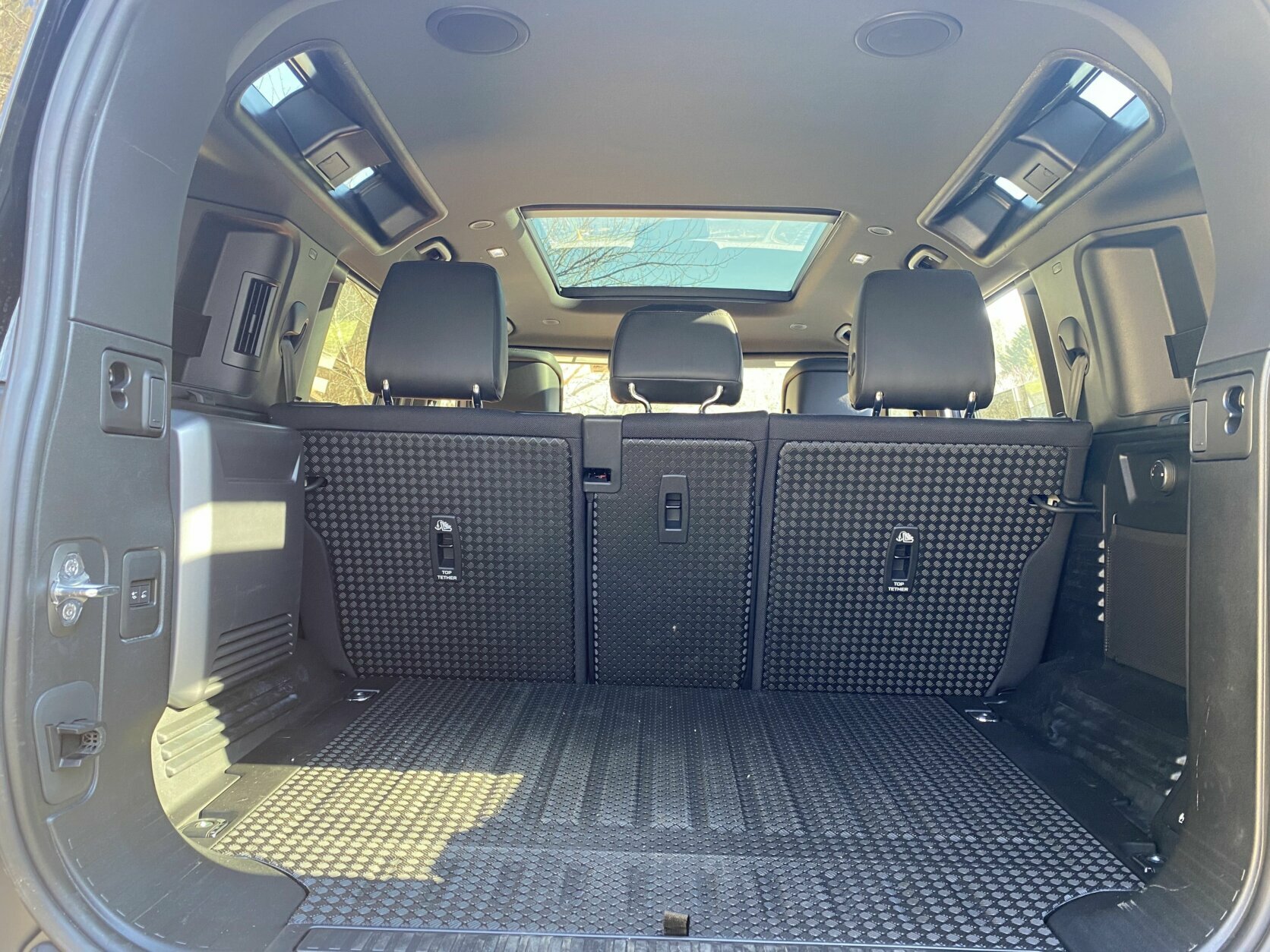 Cargo space is not an issue in this Land Rover Defender.