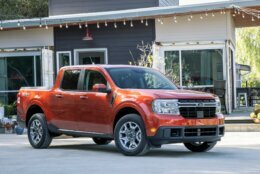 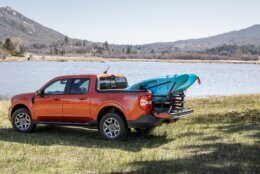 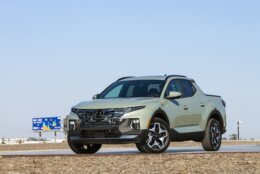 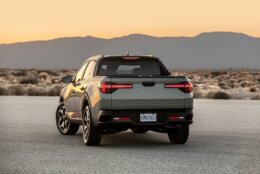 Remember the compact trucks that were popular in the 1980s and 1990s? Well, they’ve made a comeback for the 2022 model year via the all-new Ford Maverick and Hyundai Santa Cruz.

Built on crossover platforms, the Maverick and Santa Cruz promise better fuel economy and ride more comfortably than traditional midsize or full size body-on-frame pickups such as the Toyota Tacoma or Ford F-150. They can’t tow or haul as much as those trucks, but they’re easier to park and have enough utility to suit many buyers. So which compact truck is the better purchase? Edmunds’ experts compared them to find out.

While the Maverick shares its platform with the Escape crossover SUV, it rides firmly, much like a conventional truck. Stiff seats and hard interior plastics can’t cushion the Ford’s bumpy ride either. Meanwhile, the Santa Cruz leverages its Tucson crossover SUV underpinnings for a smooth ride over almost any road surface. Supple, supportive front seats further enhance driving comfort. Hyundai’s Santa Cruz is off to a strong start with superior style and ride refinement.

Ford offers the Maverick pickup with two engine choices: a 2.5-liter four-cylinder hybrid producing 191 horsepower or a turbocharged 2.0-liter four-cylinder making 250 horsepower. The peppier motor hustles the Maverick to 60 mph in just 6.4 seconds and returns a respectable 25-26 mpg in the EPA’s combined driving estimate. Going with the hybrid rewards buyers with an incredible 37 mpg combined.

The Hyundai Santa Cruz also has a pair of powertrains: a base 2.5-liter four-cylinder with 191 horsepower or an available turbocharged 2.5-liter four-cylinder with a stout 281 horsepower. The base engine only manages an EPA-estimated 23 mpg combined, while the turbo engine trails the Maverick’s sprint to 60 mph by a tenth of a second. With neither a performance nor efficiency edge, the Hyundai Santa Cruz falls behind the Ford Maverick in this category.

Unlike conventional body-on-frame trucks, unibody platforms lack the structural integrity to tow heavy loads. But what the Maverick and Santa Cruz lose in pulling power they make up for in flexibility.

The Santa Cruz is rated to tow 3,500 pounds with its base engine and 5,000 pounds with the turbo powertrain. It’s worth noting that the Santa Cruz doesn’t come with a factory-installed trailer brake controller, which is a feature you can use to adjust the trailer’s brakes from within the cabin. For heavier trailers, it’s a near-must.

With ratings of 2,000 and 4,000 pounds for its hybrid and turbocharged engines, respectively, the Maverick can’t tow as much as the Santa Cruz. However, an available trailer brake controller should give drivers more confidence. The Maverick also optimizes in-cabin storage with clever cubbies.

At 4 feet long, the Santa Cruz’s bed is shorter than the Maverick’s by half a foot, but it’s just as configurable and features a versatile underbed storage bin. Payload ratings for the Santa Cruz and Maverick are comparable for hauling materials. Given that each truck has towing and storage perks, these two are on equal footing.

The Ford Maverick starts at $21,490, including destination, for its fuel-sipping hybrid version, though standard equipment is thin. Features such as cruise control and a remote tailgate release cost extra. Choosing the turbocharged four-cylinder for $1,085 and the all-wheel-drive system for $3,305 won’t, by themselves, unlock the 4,000-pound towing capacity either — you’ll need to add the $745 tow package.

We’re glad to see the return of compact pickups, satisfying the needs of DIYers and adventurers. The Ford Maverick and Hyundai Santa Cruz may share this segment, but each is targeting a slightly different audience. Of the two trucks, Edmunds finds the versatile and well-equipped Santa Cruz to be the better all-around pick.