A rough April and cold start to May could shield crabbers from a bad 2020 brought on by the coronavirus economic downturn.
Listen now to WTOP News WTOP.com | Alexa | Google Home | WTOP App | 103.5 FM

With stories of poultry farmers culling chickens and potato farmers giving away tons of tubers, it’s natural to wonder what crab fishermen and oyster farmers in the D.C. region are dealing with during the coronavirus-related economic downturn.

While times are bleak for industrial farmers in the Midwest who have raised pigs they can’t sell, it’s a little more nuanced for the oyster farmers and crab fishermen based on the eastern shores of Maryland, Delaware and Virginia.

Chris Moore, a senior scientist with the Chesapeake Bay Foundation, said oyster farmers are more anchored to a harvest schedule, as they seed their farms with “spat” about a year ahead of time. They generally want to send their shells to market at a traditional size.

Crabbers, though, have a bit more flexibility on when to set out their traps, and while uncertainty remains, the recent stretch of bad weather has saved the May market.

She said the variance may seem small, but a divergence of one or two degrees can impact the ecosystem significantly.

The last half of April saw highs only in the 50s and 60s, along with a number of rainy days.

All of that adds up to a slow start for crab fisherman, who are allowed to put their traps out in the Chesapeake starting April 1.

The first part of May also looks to be tough for crabs, as temperatures generally will not be much warmer, Bermensolo said.

Robert T. Brown, president of the Maryland Watermen’s Association, said the cold weather kept crabs dormant and has depressed the catch so far, which means crabbers are not selling into a down market.

John Rorapaugh of Profish, a distributor, and Ivy City Smokehouse, the seafood market in D.C., said prices on May 1 for steamed crabs by the dozen ranged from $65 to $85, depending on the size.

That’s about in line with prices tabulated by the Baltimore Sun in May 2019.

Jack Brooks, of J.M. Clayton, a processor and first-level buyer and seller of crabs and oysters on Maryland’s Eastern Shore, said the industry had been expecting a huge season this year.

“We were thinking, ‘Gosh we’re going to have a lot of crabs.’ Because we haven’t had any weather to hurt the overwintering crabs in the Chesapeake, and there were crabs left in the Bay last fall,” he said.

“The calendar says it’s May, but the crabs and the weather say it’s closer to April 1 … It could be a silver lining. I don’t know. It’s our first time experiencing anything like this.”

Brown, a fisherman himself, said his concern for his association’s members is that once the weather warms up later in the month and crabs start moving around and getting caught, there won’t be a strong market.

“We’re afraid our market’s going to be glutted, because about 50% or more of our hard crabs are eaten in restaurants,” he said.

“Now people do come get them and are eating them, they’re selling well in places like Baltimore and D.C., but all the crabbers aren’t even crabbing all their complete rigs yet, they’re just starting.”

For now, the crab fishermen should be able to sell all of the crustaceans they can catch, especially ahead of Mother’s Day weekend.

Many families like to eat crabs for the holiday, and even during the coronavirus stay-at-home orders, crabs can be picked up live curbside and boiled at home.

“It’s a precious resource,” said Greg Casten of Profish, Ivy City Smokehouse and Georgetown’s Tony and Joe’s. “Right now … anybody who’s got crabs for sale, come on down to Profish, I’m pretty sure we’ll be able to get rid of ’em.”

Brown said the weather-related slow start may have shielded the watermen in his association so far, but he does not know what will happen this summer if restaurants reopen with significant social distancing measures still in place.

“When these restaurants open up, they’re going be allowed to only have so many people per square footage in the building. If it cuts their capacity in half, how are they going to survive on that little of profit margin?” Brown asked.

“How many people are going to want to go out and eat in public right now? We don’t know how long it’s going to last or how many times it’s going to peak.”

In the meantime, Brown suggested that consumers contact their favorite seafood houses and ask about picking up items curbside.

For Profish’s Casten, that’s the immediate solution for those who need a seafood fix, and his Ivy City Smokehouse is ready to support customers that way. And if it turns out that D.C., Maryland and Virginia can’t consume its usual volume, he is still confident consumers in the rest of the country will pick up the slack.

“There may be a point where harvesters are looking to sell crabs outside of the area more than they have before, especially to some areas that don’t have stay-at-home,” Casten said. “The demand would easily go there … The demand for the crabs is not going to go away.”

Even J.M. Clayton, based four hours east of D.C., is happy to sell crabs directly to the consumer.

Call ahead, Brooks said, before making the drive, because some days this year, fishermen have not brought in any crabs.

He said that’s partly because crabbers anticipated a reduced demand due to the pandemic and put out less gear than usual.

“I think a lot of them are waiting for the warmer water [before starting up]. The weather and the pandemic are playing some games with the crab supply here in Maryland,” Brooks said.

It’s possible that the local economy restarting will sync up with increased crab activity.

“When the crab harvest returns to somewhat of normal, we’ll have an idea if the virus is knocking back the demand significantly,” Brooks said.

“A lot of our business we do in restaurants, and of course the demand for that has fallen way, way off, but the demand for takeout is way up. So that kind of tells me people are wanting to eat seafood, but they can’t buy it at their normal place.”

What happens if there are significantly fewer crabs caught in 2020?

Logic said there will just be more and larger crabs in 2021, but it’s not that simple.

“One would think if you leave more crabs in the Bay this summer, they’ll be more crabs in the spring. But remember, these are short-lived animals. They only live three years in the wild. Crab populations vary widely,” Brooks said.

“There is absolutely no guarantee if you take less crabs out you’ll have more crabs in 2021. It doesn’t work that way.”

Casten said some fishermen and oyster farmers will definitely have a bad 2020.

“They might be eating more rice and less of their own catch,” he said.

Still, all of the industry insiders said people who love seafood should make an effort to support the fishermen by ordering carryout, whether it’s pre-cleaned whole fish, oysters on the half shell or cooked or live crabs.

The Chesapeake Bay Foundation has a page on its website to connect buyers with oyster farmers, and a video that shows you how to shuck your own oysters.

“You need to go to your seafood restaurants and ask them if they can get crabs to go,” Brown said.

And while Casten called the crab season “lousy” so far, he is happy to try help people get their fix.

“I’ve already got the word out, I’ll take every bushel for sale. So let’s see what we can do,” he said. 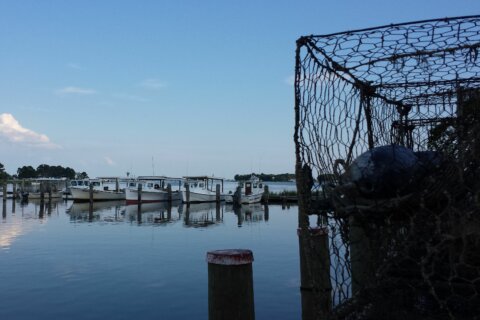