Caramel has enjoyed something of a renaissance the last few years. It seems to be all over the place now. So how did we get here? Learn more about this underrated confection, and check out some tempting recipes.
Listen now to WTOP News WTOP.com | Alexa | Google Home | WTOP App | 103.5 FM
(1/10) 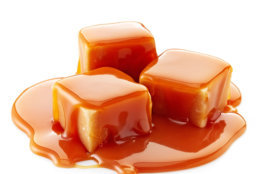 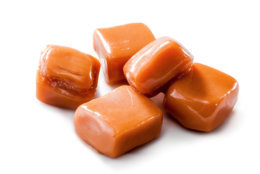 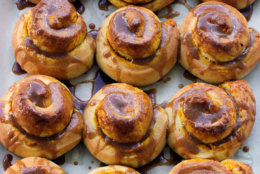 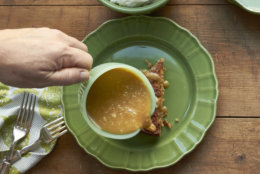 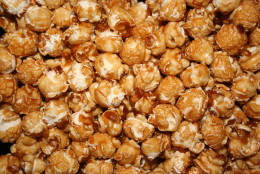 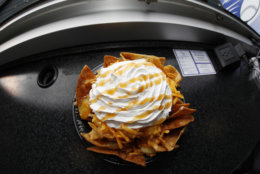 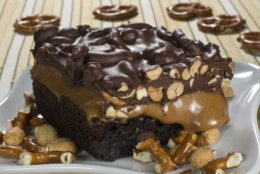 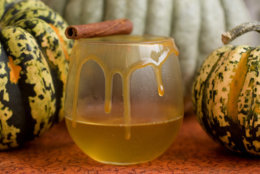 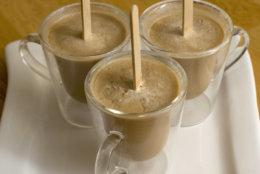 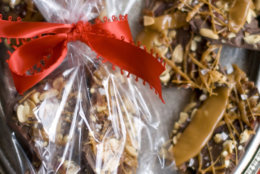 WASHINGTON — Caramel is but a simple substance, reliant more on careful alchemy than ingredients. Sugars are heated and stirred just so, then milk and fat are added and it’s all stirred some more.

The result is golden magic. Combine that with chocolate, and the result is as perfect as Scherzer’s A-game.

And like chocolate, caramel is just so versatile: It can be a solid candy; a thick dip for fruit; or thinned out for a saucier situation.

After over a century of mostly supporting roles, caramel is getting as many starring roles as chocolate these days — especially with fall and the Halloween candy deluge. It’s in yogurt. It’s in coffee. In coffee creamer. In maple syrup. In pancake mix. In diet(?!?) snack bars. It’s now even in M&Ms (and sounds like David Cross).

So how did we all get here? Who in the heck dreamed up this concoction, and when? And is it pronounced “CAR-mel” or “CARE-uh mel”?

Caramel’s origins are fuzzy. Confectionery pioneers were making hard candies in kettles back in the mid-17th century. At some point, a genius figured out that adding milk and cream to boiling sugar and water yielded something special.

Credit one Milton Hershey for introducing caramel to the mainstream American palate, before Hershey’s Chocolate ever came to be. Yep: He actually found success making caramel before he launched his chocolate empire, said Pam Whitenack, director of the Hershey Community Archive in Hershey, Pennsylvania.

After his first business went bankrupt in 1882, Hershey traveled to Denver. There, Whitenack said, he learned a formula for caramel using fresh milk, “which was an important innovation in that they make the caramels naturally chewy … but also increase their shelf life.”

It didn’t catch on immediately. After another failed venture in New York, Hershey returned to Lancaster, the Pennsylvania town where he had learned to make candy. In 1886, he started the Lancaster Caramel Company, which became the largest caramel manufacturer in the nation, even marketing to Asia and Europe.

It was a trip to the Columbian Exposition in Chicago in 1893 — featuring an exhibit of chocolate-making machinery — that persuaded Hershey to shift away from caramel.

According to Whitenack, he told a companion after seeing the exhibit: “Caramels are a fad. Chocolate is permanent.”

You probably can guess what happened next: Hershey sold off the Lancaster Caramel Co. and went all in on chocolate. “He just walks away from it,” Whitenack said. “He’s like, ‘I’m done.'”

He then proceeded to make chocolate bigger than caramel ever was.

Or did he? As the numbers indicate, caramel is growing, and it’s showing up in unexpected ways. Christopher Gindlesperger, a National Confectioners Association spokesman, cites such new examples as caramel crunchy chickpeas, salted caramel cookies and caramel made with coconut milk.

The addition of salt, which has no doubt had its skeptics, is now an accepted thing.

The why of this is arguably scientific. A 2016 study found that salted caramel can be downright dangerous to sensible eaters. While other foods yield satiation, complex flavors such as salted caramel (which is salty, sweet and creamy) stimulate even more craving and consumption — an effect that the researchers term “hedonic escalation.”

Long story short, the researchers found that “a final analysis correlated the amount of hedonic escalation with the number of flavors a participant identified in a food.”

Does caramel’s popularity of late still sound like “a fad” now?

Yes, caramel is but a simple substance that comprises a complexity of flavors. And you best believe it will elevate your kitchen game going into the holidays. (Check out the gallery above for some choice recipes that will convert even the most-militant pumpkin spice enthusiast.)

One last thing: That sticky issue of pronunciation

But how is “caramel” supposed to be pronounced, you ask?

Merriam-Webster’s actually rules that both pronunciations are OK, as does the National Confectioners Association. Whitenack pronounces it “CARE-a-mel,” but she has co-workers at the Hershey Community Archive who say “CAR-mel.”

We won’t sugar-coat it: This is unacceptable. Pick a side, people.

To break the deadlock, the case was reviewed by Washington’s Top Food Court: the WTOP newsroom. And as you’ll see in the video above, the court’s ruling, unfortunately, was not unanimous.