Is there any chance that an authentic cheesesteak sandwich made in Philadelphia and sent on a 140-mile journey to D.C. could taste as good as it does fresh off the grill in the City of Brotherly Love? Philly natives who work at WTOP give their reviews.
Listen now to WTOP News WTOP.com | Alexa | Google Home | WTOP App | 103.5 FM

WASHINGTON — Is there any chance that an authentic cheesesteak sandwich made in Philadelphia and sent on a 140-mile journey to D.C. could taste as good as it does fresh off the grill in the City of Brotherly Love?

WTOP wanted to find out when we heard that the Philly landmark Pat’s King of Steaks had started offering online delivery through Goldbely.

So, for $99, we ordered a four-pack of cheesesteaks “wit” (with onions) with Cheez Whiz. 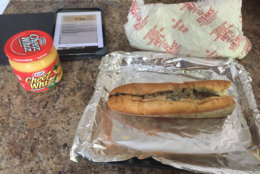 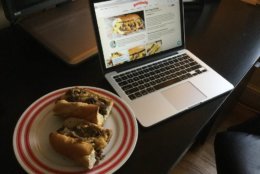 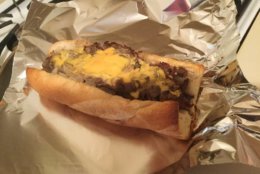 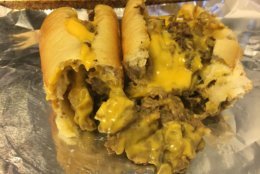 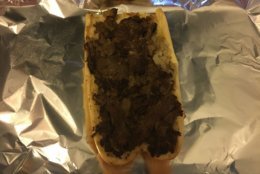 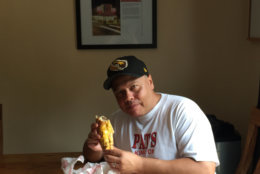 A box arrived filled with carefully wrapped sandwiches and ice packs, a single separate container of cheese, and instructions on how to reheat the sandwiches in a 300-degree oven.

WTOP recruited Philly natives who work in the newsroom for the crucial taste-test, and asked for their reviews.

“I have to be honest,” said editor Mike Jakaitis after taking his first bite, “for a cheesesteak to come through the mail and you put it in the oven, it tastes pretty darn good!”

Jakaitis said he missed the “ambiance” of eating the sandwich while standing on a corner in South Philadelphia, but the ingredients held up well, in his opinion.

“The flavor of the steak is excellent, the bread is toasted … you put your own Cheez Whiz on there — overall pretty good,” he said. “Now, would I spend the money to have these delivered to me? Maybe — if I get a raise.”

News director Jamie Forzato admitted she didn’t have “high hopes” that the sandwich would be a winner, and she did run into some problems.

“The bread crease completely fell apart,” she said, and there was a temperature issue. “The whole sandwich tended to lose heat more quickly than when it’s fresh off the grill, so about halfway in, it was already cold.”

On the upside, Forzato said the sides of the sandwich got nicely crispy in the oven, and the steak inside was “pretty good.”

“I thought it would lose that made-in-the-place taste,” Brooks continued, “but if you’re really craving a Philly cheesesteak from Pat’s, it’s worth sending for it,” he concluded.