With endless recipes and a variety of preparation methods, settling on one for your Thanksgiving turkey can be more stressful than hosting a houseful of relatives. But it doesn't have to be.
Listen now to WTOP News WTOP.com | Alexa | Google Home | WTOP App | 103.5 FM

WASHINGTON — Thanksgiving Day is almost here: Do you know how you’re going to cook your bird?

With endless recipes and a variety of preparation methods, settling on one for your Thanksgiving turkey can be more stressful than hosting a houseful of relatives.

But it doesn’t have to be. Three D.C.-area chefs and restaurateurs offer their best tips for brining, roasting and frying a turkey, so that your holiday meal is moist and memorable.

Joe Palma, executive chef at Bourbon Steak, has cooked countless turkeys throughout his career. And he says it doesn’t matter if the turkey is roasted or fried: If it’s not brined, it isn’t worth it.

Brining a turkey — or soaking it in a solution of salt, water and often a few additional seasonings — does a few things for the turkey. For starters, it pre-seasons the protein. 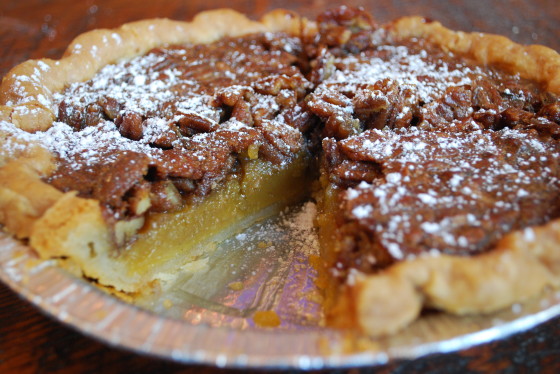 How to make the perfect Thanksgiving pie

“But it also allows cell walls to suck up more moisture than they would normally hold,” Palma says. Which helps to ensure your turkey won’t dry out during the cooking process.

That said, it’s important that you don’t let the turkey get too salty. Palma says one way to avoid an over-salted bird is to keep the salt to 3 percent of the total water weight of your brine. (If you submerge your turkey in 1 kg of water, dissolve 30 grams of salt in that water.)

He also throws a bay leaf, rosemary, black pepper and juniper berries into the solution for some added seasoning.

“If you do a 10 percent salt brine, it will absolutely be too salty. Whereas if you use a 3 percent brine, what you’re doing is very gently adjusting the amount of liquid in the bird.”

If you buy a frozen turkey, make sure it’s completely thawed before you brine it. Palma recommends brining for a minimum of 24 hours, and even longer if you have a bigger bird or an artisanal, farm-fresh turkey. Those tend to be leaner and tougher than the store-bought varieties.

When it’s time to take the turkey out of the soaking solution, put it in the refrigerator to dry out for a few hours before you start the cooking process.

“The only thing that’s going to do is let you get crispier skin,” Palma says. “Then you chuck it on into the oven and it will be nice and brown and evenly crisp and beautiful for you.”

If you choose to roast the turkey after it brines, Brant Tesky, executive chef of Acadiana, says the simplest approach is often the best.

“The problem is, if you put all that stuffing in the bird, that’s the last thing to cook. So the breast meat will dry out because it’s going to get overcooked, while you’re still kind of waiting for the stuffing in the middle to really cook through.”

His best tip is to make a packet out of aluminum foil in which to cook the stuffing, and place that next to the turkey in the roasting pan.

“It ensures that if the stuffing is done before the turkey, you can pull that out and continue to cook the turkey or vise-versa. If the turkey’s done and the stuffing still needs more time, you can always keep it cooking in that little aluminum foil cup.”

Tesky says to start roasting the turkey in a 400 to 425 degree oven for the first 30 minutes. “And then after that half-hour, I’d lower it down to about 300 degrees,” he says, until the temperature inside the turkey reaches about 165 degrees.

Let the turkey rest for about 30 minutes before you’re ready to carve it for your meal.

Mark Bucher, co-founder of Medium Rare, is a fan of fried turkey. Only, he doesn’t suggest you fry your turkey at home. This Thanksgiving, he wants to fry it for you — for free.

For the past seven years, Bucher and his staff at Medium Rare in Capitol Hill, have been frying up turkeys for local residents on Thanksgiving Day.

He pulls out all of the restaurant’s fryers, plus six that he rents, and from 11 a.m. to 2 p.m., Washingtonians come to the Barracks Row restaurant with their raw turkeys and leave with a fully cooked pièce de résistance.

“You can’t dry out a turkey when you fry it,” says Bucher, who adds that a dry turkey is everyone’s greatest Thanksgiving Day fear — and one that is perpetuated in the movies.

“It cooks it fast, it cooks it in a moist environment so it keeps it moist, it keeps the outside crispy, and it’s just a different flavor,” he says.

Over the years, the turkey fry at Medium Rare has turned into an event of sorts. Bucher offers hot cider and coffee, and shows the Macy’s Thanksgiving Day Parade on TV.

“People will bring desserts, baked goods, pies. Everyone just sits and hangs out and it’s one of those magical moments where there’s no cellphones because no one’s work is calling them, no phones are ringing. People are just talking to each other. It’s an amazing day,” Bucher says.

The Medium Rare turkey fry has also turned into an affair that helps some of D.C.’s neediest families. Bucher says he originally started the event thinking it would be a nice service to offer busy families or those who live in apartments with limited kitchen space.

However, after the first fry, Bucher found a note on his windshield from a family who attended the event. They lived in a shelter down the street and had a Thanksgiving turkey, but no way to prepare it.

“There are plenty of free turkeys for those who need them, they just don’t always have places to cook them. So part of this event has become a place to cook it,” says Bucher, who cooked 342 turkeys last year.

If you want your turkey fried for Thanksgiving, Bucher’s best piece of advice is to arrive to the event early, to ensure your bird gets a cooking slot. He recommends keeping the bird between 8 and 15 pounds — that size takes approximately 30 minutes to cook.

When each turkey comes out of the fryer, Medium Rare puts it into a pan and covers it with foil so participants can transport it home. Approximately 30 minutes before you’re ready for Thanksgiving dinner, Bucher says to heat the fried turkey in a 170 to 200 degree oven.

The turkey fry is free, but Medium Rare will be collecting donations for DC Central Kitchen, as well as an organization that collects hats, scarves and mittens for newborns and children, at the Thanksgiving Day event.