“It triggers an emotion and a passion … and it takes me to my happy place.” Why you need to discover this traditional British dessert.
Listen now to WTOP News WTOP.com | Alexa | Google Home | WTOP App | 103.5 FM
(1/4) 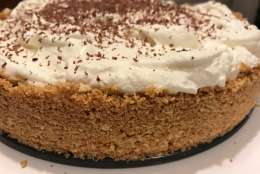 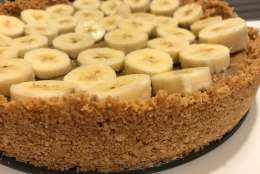 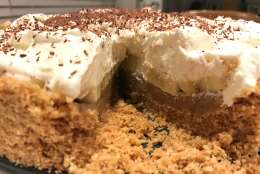 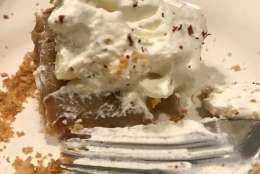 WASHINGTON — “It triggers an emotion and a passion … and it takes me to my happy place.”

If this is the first time you’re hearing about banoffee pie, you’re not alone. A few weeks ago, I was right there with you — until I found myself in a conversation with Johnson on pastry.

“Pies by themselves are great, but sometimes it’s just crust, then filling, then crust. [Banoffee] has a symphony of things going on,” he continued.

It turns out, banoffee pie is everywhere in the U.K. — similar to apple pie’s presence in the U.S. And England is where Johnson took his first bite, thanks to his longtime friend, Chris Hull.

Never one to turn down the opportunity to work on a story that digs into desserts, I placed a call to London to get the details on banoffee.

Hull told me the traditional way to make the pie is to use crumbled digestive biscuits and butter for the base. Bananas, sticky toffee and whipped cream are layered on top.

“Anything that’s particularly calorific — all those magnificent desserts that you have — come from the United States, but on this particular occasion, we can lay claim to banoffee pie,” Hull said.

The inspiration for the pie, however, did come from an American recipe for coffee-toffee pie. Banoffee’s inventors, Nigel Mackenzie and Ian Dowding, ditched the coffee, added bananas and enjoyed the sweet taste of success. In 1971, they listed it on the menu at their restaurant in Sussex, which is an hour south of London, and the rest is history.

“Now it’s served in supermarkets all across the country, indeed in many parts of the world, and banoffee pie is a very favorite dessert here in the United Kingdom,” Hull added.

Even former Prime Minister Margaret Thatcher couldn’t get enough of the rich and creamy confection.

“Thatcher would famously operate this country on just four hours of sleep, and obviously banoffee pie helped her to make those important decisions,” Hull said.

What makes banoffee so addicting? For Johnson, the toffee is the tipping point.

“Now toffee is one of those flavors that also triggers an emotion because it’s not like the sweetness of chocolate that can overpower you; it’s a bit of a seduction, a bit of a tease. You like it, but you’re not even sure why you like it,” he said.

“So now you throw it in with a little bit of that  banana cream pie business going on, English biscuits, and suddenly that symphony of tastes come together and it creates a passion. And then adding to it: We always love what we can’t get.”

He’s right about that. After a quick search and a few phone calls around town, I found only three places that serve banoffee pie, including The Alibi on Capitol Hill, The Cakeroom in Adams Morgan and The Irish Inn at Glen Echo.

The pie’s scarcity is something Johnson wants to see change.

“Reese’s had that whole thing with the peanut butter and chocolate combined; it worked here in America. I don’t know why toffee and banana cream hasn’t been put together before,” he said.

Maybe one day, it will even become an American favorite.

Interested in giving banoffee pie a try? I tested out a recipe from Saveur.com. Aside from “make this, and then let it chill” the recipe took about 40 minutes to construct and about 40 seconds to devour. I highly recommend adding this to your dessert rotation.