WASHINGTON — A man was arrested for the assault of two Virginia State police officers outside the Vienna Metro station Sunday as white nationalists boarded the train to the “Unite the Right 2” rally in D.C.

Fairfax County police Chief Edwin C. Roessler said that beyond the arrest, the day had been generally peaceful.

“It is our goal to provide protection to everybody today, so far it’s been a pleasant day,” Roessler said.

Police presence was high as both the rally organizers and counterprotesters arrived at the Vienna station. Roessler said a similarly robust presence will be there to greet protesters returning later Sunday night to make sure the groups stay separate and peaceful.

“These opposing groups have demonstrated violence last year in Charlottesville, yesterday, today and as we speak, in D.C. and Charlottesville,” he said. “We will be here if any one commits a crime. We will arrest them. Our goal is to protect the ridership, the community and everyone’s First Amendment rights.” 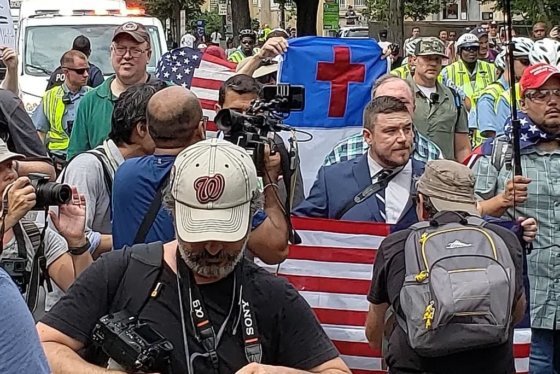