Beatles alum John Lennon, who taught us all to “Imagine,” had just returned home with his wife Yoko Ono when he was assassinated outside the Dakota Building on the Upper West Side of Manhattan.

Now, WTOP is learning exclusive insights on that fateful night from singer/songwriter Willie Nile, who performs at Hamilton Live on April 8 and was at the recording studio with Lennon that night.

“On Dec. 5, 1980, I took my band in to make my second album for Arista Records,” Nile told WTOP. “I was in Studio A and John was in the mix room upstairs with Yoko working on a Yoko project. My co-producer, Thom Panunzio, knew John [and] said, ‘Do you wanna meet John?’ I said, ‘Yeah, absolutely, but let’s wait a couple days.’ … This was Friday night, so I figured Tuesday we’ll see him.”

During the interim, Lennon’s team actually called downstairs to ask Nile a favor.

“Sunday night, the 7th of December, we’re in the studio recording and the phone rings at midnight,” Nile said. “It’s one of John’s engineers saying, ‘John is out of guitar strings. Do you have any guitar strings he could use?’ We just looked: ‘John Lennon needs guitar strings?!?’ So we go diving into our bags and pull out guitar strings. I was gonna put a note with the strings: ‘To John, thanks for the music. Love ya,’ but I decided that’s too corny. I’m gonna meet him in a few days. I’ll tell him when I see him.”

As fate would have it, that meeting never happened. But Lennon did, in fact, play on Nile’s strings.

Nile will never forget how the rest of that fateful day unfolded.

“About 10:30 that night, we’re in the studio recording Monday night, Dec. 8, and the phone rings,” Nile said. “Thom Panunzio, our co-producer, had a buddy in New Jersey, a collector, bugging him all week, ‘Can you get me John’s autograph?’ And we had done a favor the night before, so Thom called the engineers and said, ‘The guy who gave John the strings would love an autograph.’ … So the phone call was saying, ‘John’s coming down now,’ and Thom said, ‘I’ll be right back’ and he left the room.”

“We’re listening back to a take we’d just done without Thom, and Thom comes in and says, ‘Somebody just shot John!’ I said, ‘John who?’ It didn’t make sense. He said, ‘John Lennon.’ I go, ‘What?’ Then you figure, ‘shot,’ what does that mean? Maybe in the hand, maybe in the foot? Sadly, that wasn’t the case.”

Nile says the aftermath was chaos.

“The phone started ringing off the hook,” Nile said. “David Geffen called, the secretary answered, and he said, ‘John’s there right? Yoko’s friend just said he’s on the way to the hospital and had been shot! But he’s there recording right?!?’ And she said, ‘Well, no, he left about 15 minutes ago.’ It was so, so, so terrible. We were all crying. So we watched TV like everybody else. One of my heroes, John Lennon.”

“Nobody knows this,” Nile insisted. “The record plant hired a bodyguard to guard him whenever he was in studio. His name was Bobby, African-American, great guy, big guy, 6-[foot]-6, 300 pounds. … I was talking to Bobby, ‘What happened?’ He told us with tears in his eyes, ‘When we got in the elevator, John was in the greatest mood,’ because ‘Double Fantasy’ was No. 1. Bobby said, ‘John was so happy because Yoko was finally getting respect from the press.’ That meant the world to him.”

While John and Yoko were flying on this personal high, the wheels of fate started tragically turning.

“John said to Bobby, ‘Bobby, let’s go to dinner and celebrate,'” Nile said. “Bobby said, ‘I’m sick to my stomach, I don’t feel good.’ John put his arm around him, ‘Don’t worry. You go home, feel better, we’ll do it another night.’ So instead of Bobby getting in the car with him and going to the restaurant then home, he would’ve been with him and been watching out. Had he gone with him, things maybe could have changed and he felt really bad about it. I said, ‘Bobby what can you do? You can’t see the future.'”

Nile himself carries similar “what if” regrets.

Instead, closure came 12 years later when he was asked to open for Ringo Starr & His All-Starr Band.

“[Ringo] said to me, ‘You wanna come on and sing ‘I Get By With a Little Help From My Friends’ … a song John wrote for Ringo,” Nile said with awestruck nostalgia. “When I was singing on stage that night, 12 years later, 1992, on mic with Nils Lofgren, I couldn’t help but think back 12 years to the [tragic night in Manhattan], because this was a John song. I’ll miss him all my life, as will most of us.”

All these years later, Nile takes solace in knowing he crossed paths with Lennon in his final moments.

AUTHOR’S NOTE: This author intentionally chooses not to name the killer, who was denied parole for the ninth time in August 2016. Click here for more on Willie Nile’s career and his April 8 show at Hamilton Live. 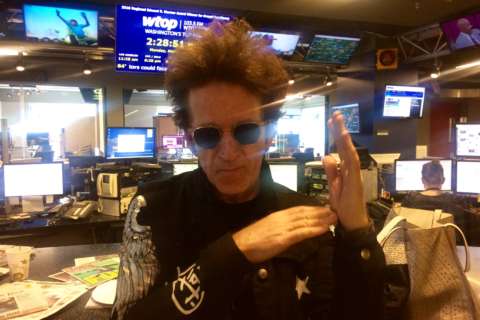